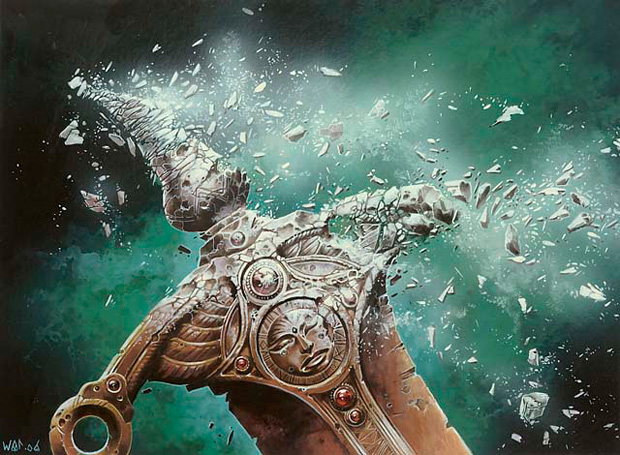 I’m sure this is going to come as a bit of a shock considering I have called advocating buying foils “intellectually lazy” from a content provider standpoint, but that’s exactly what I want to talk about today. I plan to go through why I feel that way, move on to why foils aren’t as bad as that condemnation makes it sound and end up with some hot spec tips on foils and a few classifications of cards that are safe foil buys.

Why I Use The Phrase “Intellectually Lazy”

From the standpoint of a content creator, I need to give good, actionable advice. I’m sure some people just scroll to the bottom of my articles and look for which cards I made graphs for and I have to be OK with that. I occasionally  put up a graph of a card I think is a bad buy to show a price trend I don’t like or discuss in depth why I think the card is a trap and it makes me smile to think of someone just noting which cards I brought up and not what I said about them, but if they get burned, they’re going to blame my advice and not their own laziness so even that little fun size Snickers of Schadenfreude isn’t worth it most days. I know for a fact some people analyze my picks through a lens of “I tweet card names to my 14 followers and if I disagree with your pick, you’re wrong and if I agree, you stole my ideas” and that’s OK with me, too. 99% of MTG Price readers are excellent and it behooves me to give you all good advice that you can take action and make money on.

Between the podcasts and the articles, I’m reaching tens, maybe hundreds of thousands of people (or the same 100 people 1,000 times) and that means telling them to fight over 20 foil copies isn’t going to help more than one of them. True that benefits our Pro Traders most, but I like when I tell a reader to grab a card that 1,000 EDH players are a week from realizing they can’t live without so they have some real, organic demand to sell into rather than tricking a bunch of people into selling cards to each other.

There are more readers than foils, which is why I tend to avoid them. I don’t like the idea of making a card pop that shouldn’t have just because I created the artificial illusion of scarcity because there were 21 copies on TCG Player of a foil when I wrote the article and then a reader checks and sees only 20 copies left and thinks there’s a run. I give you all more credit than that, per se, but I still think that you can make any spec look smart by getting people to buy cards they didn’t want just by reminding them stock is low. I have been avoiding Reserved List picks lately for the same reason.

It’s tough to analyze the impact of an increasingly-nimble reprint ability from WotC vis-a-vis new products like Explorers of Ixalan, the tendency of WotC not to reprint cards over a certain price point, how long we have for a card to grow before a potential reprint can hurt its price growth. It has taken a lot of us years to get even passable at it. It’s my contention that a lot of the time, when someone tells you to buy a foil of a card that might be in Commander 2017 a few weeks before Commander 2017 is spoiled, they just don’t want to put thought into it. “It’s a kitty cat, buy kitty cats, they won’t reprint foil kitty cats, buy every pretty $hitty kitty.” They didn’t reprint foil White Sun’s Zenith, as predicted. And did what I said was going to happen happen to that price? Soon early speculators ran out of late speculators to sell them to and the late speculators just ate it.

Do I Think Readers Are Lazy If They Buy Foils?

If you discover low supply on a foil that’s about to become popular due to some event like showing up in a deck or sideboard, new EDH popularity or just people waking up to how good the card is (looking at you, Sunbird’s Invocation), then go to town. If you’re a person and you notice an irregularity on a foil card you think you can profit from, go for it. I don’t even care if the demand is organic, if the price goes up and you make money, good for you. But I can’t tell thousands of people to fight over 10 foil copies and pretend I’m good at this when the price moves. I hope this paragraph stops all the dumb “Hei jesson u say foilz r bad but why come i just selled a foil ur bad” tweets I have been getting lately.

Which Foils Are Good Bets?

It really depends on the format. Some cards sell to casual players and those foils are hit or miss. Do casual players foil their decks? Yeah, sometimes. But other times, cards that casual players need 20 copies of basically don’t move for like 5 years. 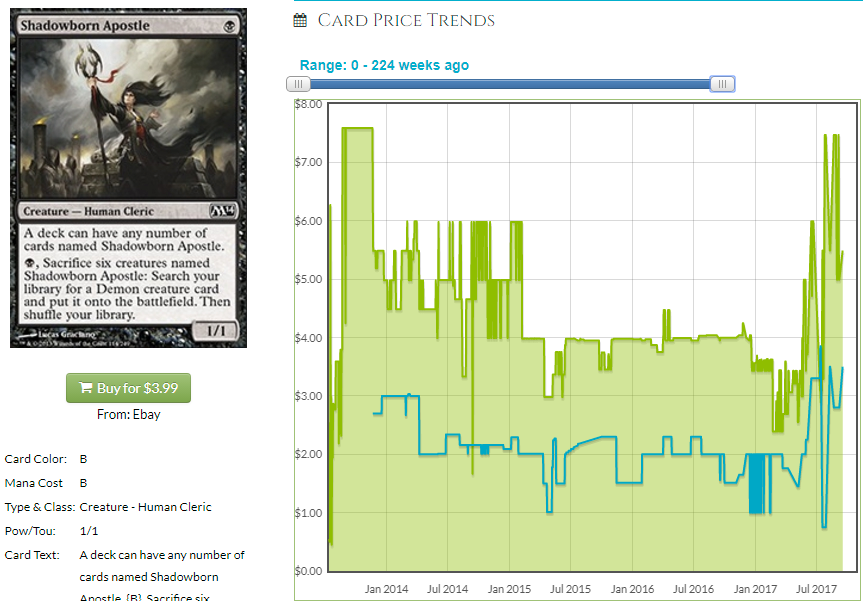 Ideally we want EDH foils that overlap with competitive formats or we need to be willing to sit on them until EDH demand (slowly) moves them up. Cross-format applicability is a big help, here. 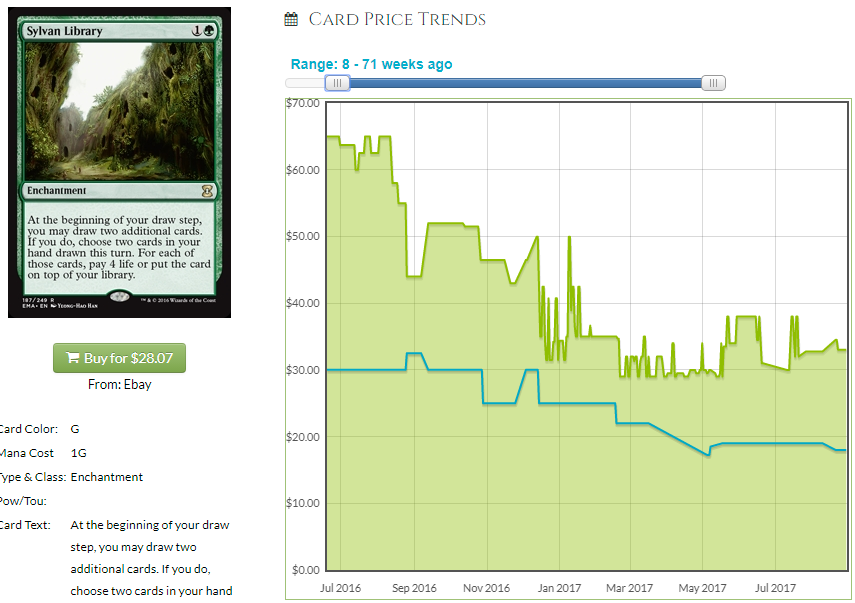 This price didn’t fall as much as a lot of other cards printed at foil for the second time in Eternal Masters because it has Legacy use to cushion the fall. Being played in both formats has really been a big help.

Good bets for us are newish cards that emerge as all-stars. EDH demand will be slow but eventually, if the card is good enough and especially is good in the Competitive EDH decks that spikier players tend to foil out, I think even EDH cards could be good bets in foil.

I think cards that could get reprinted but can’t be reprinted in foil are a trap, personally. I like demand profiles that will increase over time and I think I found a few candidates this week.

I Feel OK Talking About These Foils 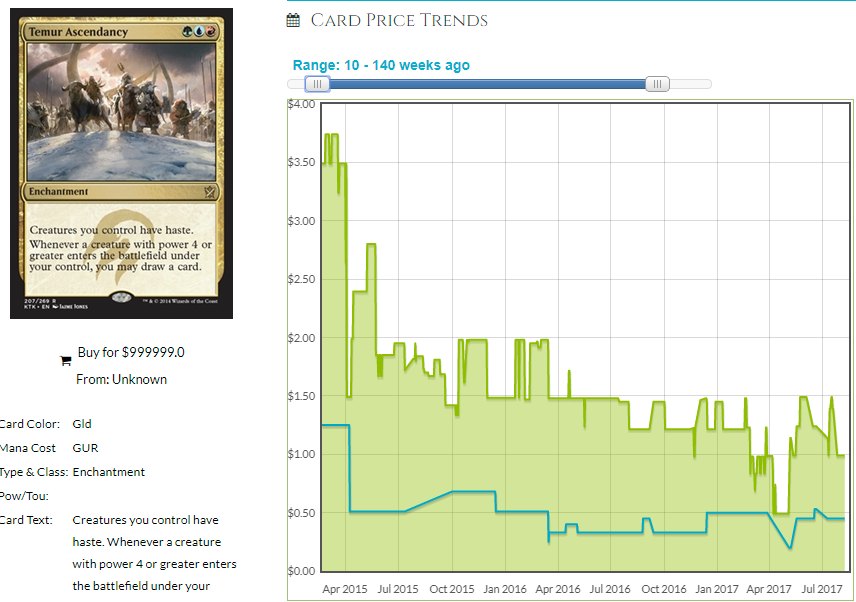 Until we add TCG Player prices, which is happening soon, the graphs make it very obvious when a card sells out basically everywhere we scrape. This card has sold out under $2 and its current multiplier pretty much indicates EDH is interested. Commander precons have shown a willingness to reprint cards like this, but this is exempt. Demand for this card will be organic – this is the 73rd-most-played card in decks scraped by EDHREC. Not many EDH players foil out their decks, but this goes in decks like Maelstrom Wanderer, Surrak and Animar. Would you believe this is actually in more decks than any of those cards, including Maelstrom Wanderer which belongs in 100% of Yidris decks?

I think this is a $5-$7 foil waiting to happen. NM copies are gone under $2 basically everywhere and a few damaged copies on TCGPlayer that are tough to even try to buy (stupid minimum order) can screw with averages but they can’t change the fact that foils of this are drying up, there is hella demand for the card and a low reprint risk (you think a lot of $2 cards are going in a future Commander’s Arsenal?) and while it’s sometimes lazy to wave your hands and say “foils can’t get reprinted” I think in this case, we built a real foundation based on its demand profile, foil multiplier and power level. There are a lot of Khans block cards and there are a lot of copies of cards Standard and Modern never wanted. I mean, compare the modest $5-$7 I have targeted for a year or two from now to what Standard can do to a card short-term. 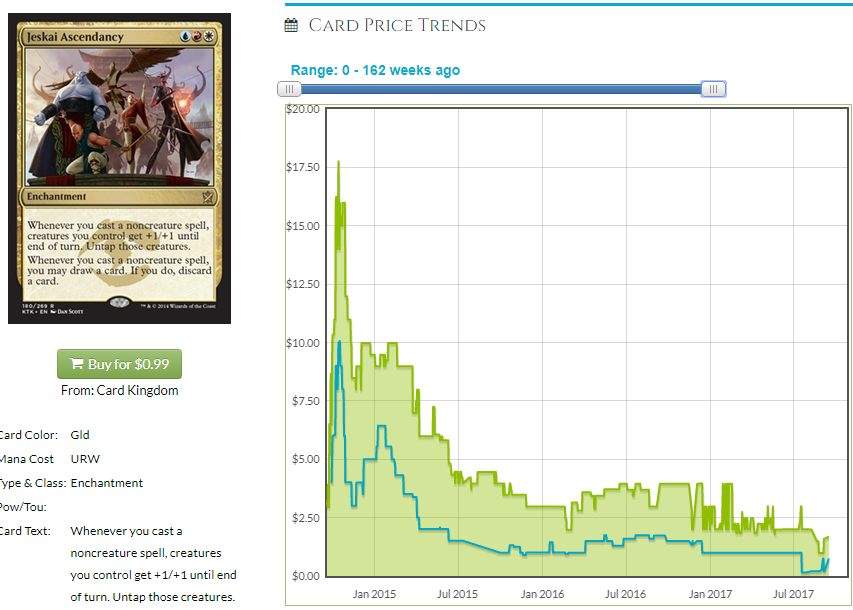 And then look what reality does to a card long-term.

This is a smart buy and it has nothing to do with mitigating the reprint risk. These will sell much more briskly at $5 since it’s above the minimum TCG Player order threshold, which I think matters. I’ll likely delve more into this concept in a future article when I find some data. 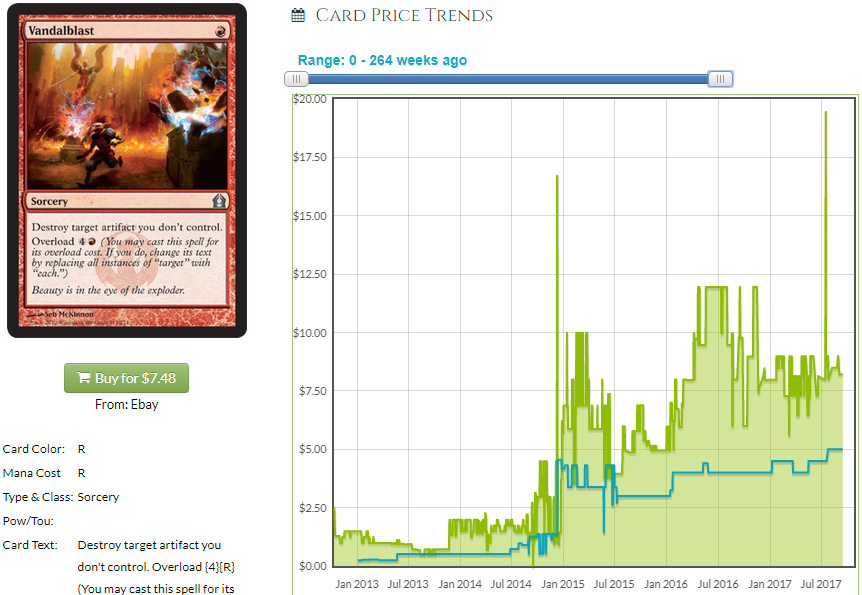 When a card is the 58th-most-played card scraped by EDHREC, has Vintage applications and has a 5x multiplier, you take notice. You notice things like the fact that it’s an uncommon printed within the last 6 years and has a Commander deck reprint and both copies are about $2. You notice that this foil price is ticking up steadily. Is this flashy enough for a set like Iconic Masters? Is it likely to be in an FTV or Commander’s Arsenal deck? This is a high-demand, sexy foil with Vintage applications (although maybe that helps Russian foils and Japanese foils and leaves English foils alone) and I’ve seen it flirt with Modern and Legacy play, though it’s not quite there, yet. 5 mana is a lot for Modern and maybe you just keep playing Ancient Grudge.

This probably gets reprinted in non-foil like 2 more times in the next 5 years and it’s always a pick out of bulk. I love getting cards like this in bulk right when they’re reprinted and go to nothing because they always rebound. When you notice a card is shrugging off reprints, ask yourself how likely a foil reprinting is and how likely it is to shrug that off, too. If Eternal Witness is in Iconic Masters, for example, it will be obvious to buy those when they tank, but don’t sleep on the foils. It will be reverse-J graph time and you’re going to feel like a dummy when you see it go U-shaped.

Multiplier – Between 6 and 7x

Here’s a card with multiple foil printings and twice as many non-foil printings with a 7x multiplier. That’s the kind of demand profile we want. This could get reprinted in foil again, but I think if you target Onslaught foils, which look the best, you have the most growth potential. This is a card that just goes in all of the decks and if even 0.1% of EDH players want this in foil, demand will still outpace supply. If this does get reprinted in foil, it’s going to be very cheap at first, and it’s inevitably going to approach 6 times the non-foil price, a price that also has upside after a reprinting. This card is reprintable, but it’s fascinating to watch its ability to shake them off for the most part. If this had never been reprinted in foil, we could be talking like 10x. 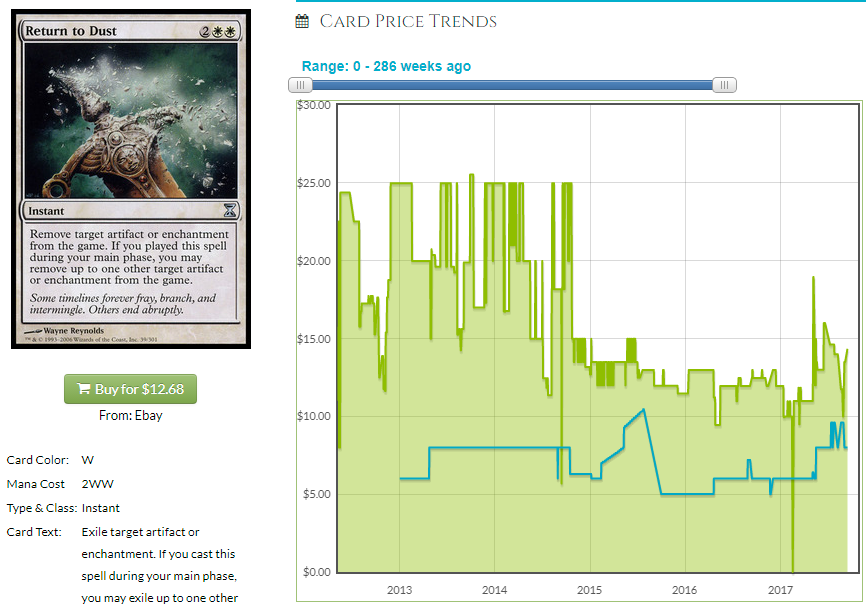 I was checking cards to try and find a good example of a 10x and this was literally the first price I checked. A mere 2 printings, one from an old block with expensive booster packs that predates the format and is the 57th-most-played card in EDH? This screams “high multiplier” despite only two printings of the non-foil. These are easy to sniff out. That’s why I always go through boxes of foils when a store has them, and after a while, you don’t even need to look stuff up – you’ll just notice when a price is very wrong. This is a reminder to shop crawl more.

I might do another installment of this. I found 3 pretty solid candidates in the Top 100 EDH cards on EDHREC, but I feel like when I drill down more, I’ll find more cards like Temur Ascendancy, which was my favorite find. Hard to buy out due to it being below $5, hard to reprint, played a ton and still cheap due to the high volume of current supply and dearth of cross-format “noise” that would distort the graph. I love finds like this and I’ll try to find more later. Until next time!