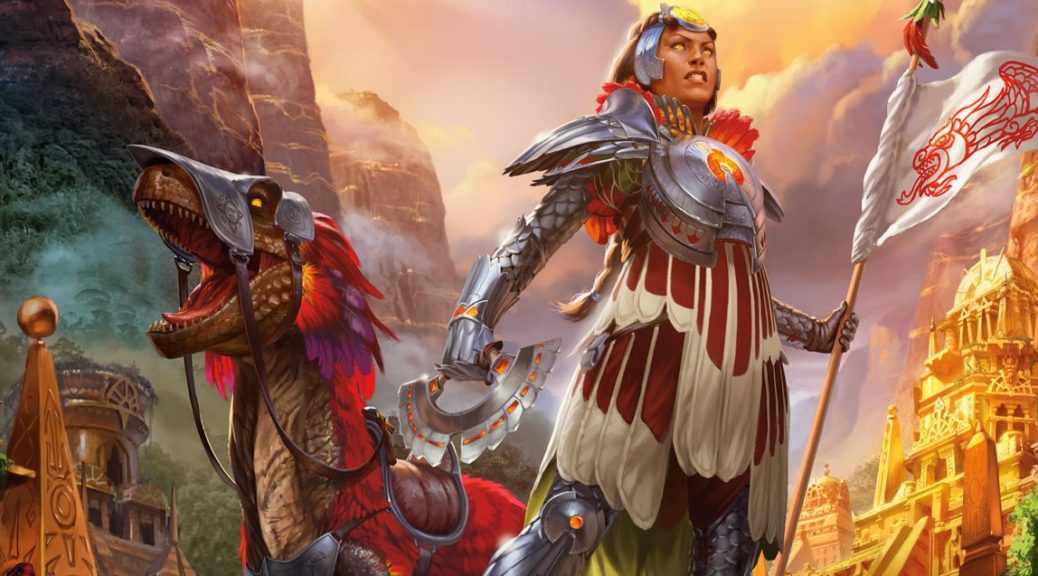 Welcome to Pro Tour Ixalan weekend! The 1st Pro Tour of the new 2017-2018 season and the final major individual event of the 2017 calendar is all set to explore the meta  anew over in Alberquerque, New Mexico this weekend.

Heading into the event the primary question from a financial perspective is whether the pros have managed to make use of the extra five weeks from the release of Ixalan to the Pro Tour to break out of the relatively settled metagame and set up shop with a fresh deck that can consistently prey upon the expected meta.

As per usual the best players in the world have been posted up in their respective testing zones for the last week or two, all seeking to locate the testing edge that will help them succeed on the game’s biggest stage.

Taking a look at the results from the last major StarCityGames Tour Standard tournament, the Top 8 field features mostly familiar elements from the Sultai/Temur Energy, Ramunap Red, Control meta that we seem to be living in this fall. Here was the Top 8 from SCG Open Dallas, Sep 30th.

The most notable deck in that list is the Esper Gift list that featured four copies each of Angel of Invention and Champion of Wits and two copies of God-Pharoah’s Gift.

Looking over those Magic Online results, the decks most likely to generate price momentum would most likely come from Mardu Vehicles, Abzan Tokens or B/R Aggro, since those decks have been mostly under the radar in recent weeks.

For us finance types, this weekend is not an ideal hunting ground. If Standard stays settled, it will limit the price movement of the key cards, many of which are already riding high.  Even key cards in some of the tier two decks like Abzan Tokens are already quite high. Anointed Processon for instance is an Amonkhet rare sitting close to $10. Format design is also contributing to the limited financial opportunities, with nine of the ten most played cards being commons or uncommons, and Glorybringer being the only rare or mythic to make that list. Also of relevance is our temporal position vs. the holiday season with many Magic players limiting their spending in anticipation of purchasing gifts. This can easily put a damper on buylist and retail card values in Standard players trade in cards to cover their bills. Countering these factors is the absence of Masterpieces in Ixalan, as well as the relatively shallow pool of Standard playable mythics in the set, which combines to leave room for key rares to float closer to $10 than the $3-5 we’ve been used to from popular rares in the last few sets.

All of this adds up to an event that is likely to generate the usual number of hype spikes, but may not be able to sustain those prices heading into next week unless a truly dominant strategy emerges.

As per usual, it is worth noting that the Pro Tour currently requires that players succeed in a mixed schedule of booster draft (IXL/IXL/IXL) and Standard play with 3 rounds of draft Friday afternoon , followed by 5 rounds of Standard starting around 4pm EST/1pm PST.

Will any of the teams find a way to unlock a hot new deck with solid game against the entire field? Will a fringe deck from the early weeks of the format suddenly end up perfectly positioned to take off? Will there be a chance to get in on a must-have card that shows early promise or will the hype train leave the bandwagon speculators out in the cold without enough buyers come Monday morning? Follow along as we explore Pro Tour Ixalan all weekend!

Editor’s Note: We will not be providing round by round coverage this weekend, but will provide relevant notes as the weekend progresses.

Walking Ballista: Jack of All Trades

Walking Ballista sees three or four of play in both Esper Gift and Sultai Energy so it’s value in the format largely depends on whether it can make it to Sunday in one or both decks. With additional play in Vintage, Modern and Legacy, supply is currently at a moderate level with an already high rare price tag of $14. At that price the risk of stagnation likely outweighs the potential to top $20 coming out of this weekend, but I still like the $20 foils longer term.

We talked about this deck at the last Pro Tour, but it didn’t really get there. Basically the plan here is to get a bunch of good creatures in your yard and then start overwhelming your opponent by bringing them back more often than they can find removal or good blocks to deal with them. Just like last time, I won’t be surprised if this pairing of cards makes the Top 8, but I will be surprised if they dominate the tournament. Gate is an uncommon in plentiful supply, and Gift is a two-of in the deck, so those aren’t the targets here. Angel of Invention is the most noatable mythic in the list, and is run as a four-of, so a deep run this weekend could potentially move its’ price from $4 to something closer to $10.

This could quietly be setting up as one of the more undervalued cards in the format.  This poor man’s Dark Confidant is a typical four-of in both BR Aggro and Sultai Energy builds and both of those decks have a solid shot at running deep in this tournament. If 12+ copies of this card land in the Top 8 it isn’t a tremendous stretch to imagine that the relatively low supply could get attached, resulting in a spike over $5.

Mono-red aggro decks have made up 10%+ of the online meta for months, and there is little sign that anyone has figured out how to tame their more aggressive draws consistently. Hazoret was much more interesting around $8, so the potential to push up to a new plateau from the current price of 15-$18 depends almost entirely on how engaged the Magic player base stays in Standard heading out of this event. Current versions of the Ramunap Red deck tend to run the full complement of four copies of Hazoret in the main, so increased interest in the deck this winter could result in Hazoret peaking over $30. Additional demand from an emerging BR aggro deck could also help this along. Personally I don’t have enough confidence in format participation to take a stab at a $30/playset profit, but do as you will given that current online inventory is relatively modest.

Abzan Tokens has been making  inroads on Magic Online lately, with a list that features three copies of mythic Vraska, Relic Seeker, as well as four copies of Legion’s Landing, Fumigate and Anointed Procession as notable rares. This deck has the capability to generate a ton of life and a ton of tokens, and a good showing deep in this event might be enough to put a bunch of players on it for FNM usage. In that case Anointed Procession, already buoyed a bit by casual and EDH demand, could gain some ground and Legion’s Landing would also have a shot at hitting a value closer to $10 than $5.

Heart of Kiran: Fresh Attack From Above?

Mardu Vehicles was a dominant presence in the first half of last season, but has fallen off heading into the fall tournament cycle. Just lately, versions of the deck running essentially zero cards from Ixalan have been putting up solid results yet again, both online and in paper. These builds still run the full four copies of Heart of Kiran, and as a $5 mythic, the potential is there for a strong spike if the deck shows up in force, puts up good Day 2 conversion rates, and lands a copy in the Top 8. On the other hand, none of the other decks run this card, so if Mardu doesn’t get there, you can expect it to stagnate.

Stay tuned for our MTGFinance coverage of Pro Tour: Ixalan throughout the weekend!