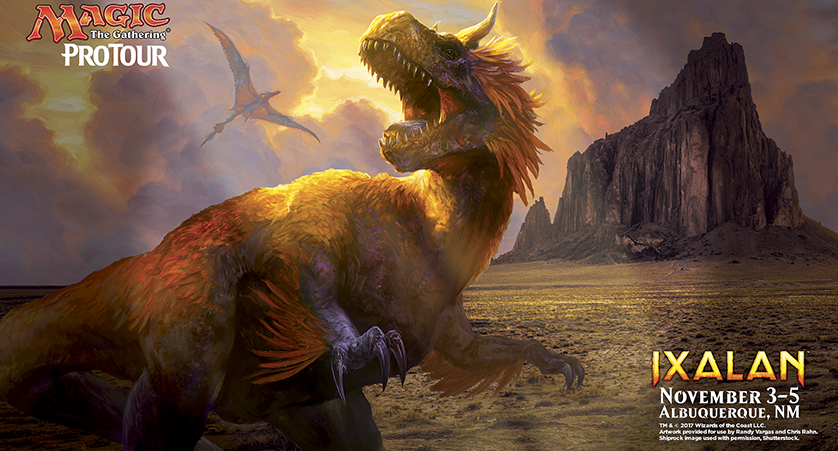 The battles rage on at Pro Tour Ixalan. The players have now completed the first three rounds of draft, and we are now facing the five rounds of Standard that will help define the evolving Standard metagame leading into the holiday season.

Follow along this weekend as we live blog relevant details as they appear!

3:49pm EST: Coverage desk calls out the following cards as likely to be pivotal this weekend:

Josh is running multiple copies of Vraska. He also has Nissa, Steward out of the sideboard. They players split the first two games one a piece. Game 3 turns into a late game duel between The Scarab God on Josh’s side and Anointed Procession shenanigans for Matsumoto. A Hostage Taker swings the tide and Yuki takes the match to go to 4-0.

Riddleform and Enigma Drake making an appearance in a spicy energy brew from Niels Noorlander.

Michael is running Trial of Solidarity in this Monument brew but he loses the match to fall to 3-1.

Phillip outlines that he feels the deck is favored against major decks in the format including Ramunap Red and Temur Energy. Angel of Invention used here to gum up the board and build the army. Tons of exile effects to deal with the multiple threats in the format that need that handling. Phillip has only won his first Standard match with the deck so far. 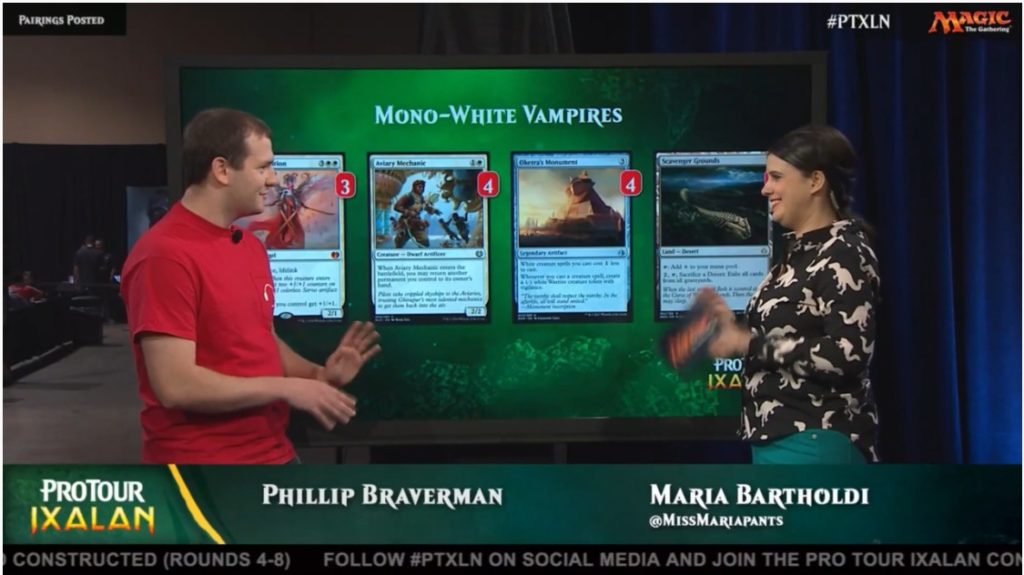 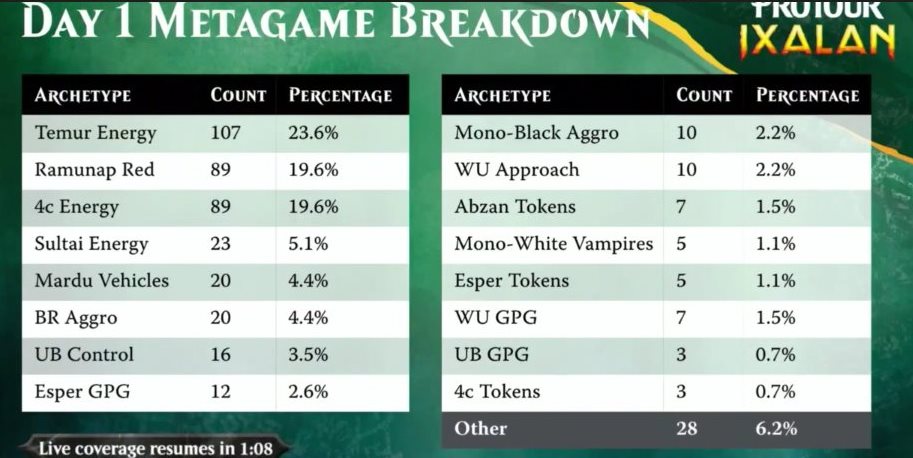 Metagame breakdown for Game 1 seems to indicate that the major pro team were unable to do more than tweak the existing archetypes for this Pro Tour. While there are certainly a small number of rogue decks, they do not seem to be in position to break the tournament and shift the meta in significant fashion.

On a back table in a match between Wilson Hunter and Scott Lipp, a crazy board state emerges that revolves around God-Pharoah’s Gift, Angel of Invention, Hostage Taker and Oketra’s Monument. Paul Cheon mentions that the lower number of Abrade in the format turns on the higher potential for artifacts.

These players split their first two games off camera. In Game 3, Metallic Mimic does some good work on camera for Hunter, in coordination with a flipped Legion’s Landing. Hunter takes the match to advance to 4-1.

Gerrard is on a new Sultai build of the Electrostatic Pummeler decks we saw earlier this year. He outlined that his team was doing very well with the deck on Magic Online so they decided to see if they could surprise the field.

Both of these players come into the round at 4-1. The first game goes super long, with Marnard ending up with a stacked board but just two cards left in his deck. Vieren saves the day with a Fumigate and takes the first one. In Game 2 Maynard seems to be on his heels, when he manages to establish a hasty flying board presence via Angel of Invention that allows him to even things up. The third game goes to a one minute time extension and the downsides to playing super grindy decks in the mirror comes to forefront as the players draw.

This deck looks to set up shop by controlling the game tempo, forcing players to hold up mana rather than committing threats in the face of incoming flying threats. Sharing several elements with more traditional Temur builds may throw some opponents off. 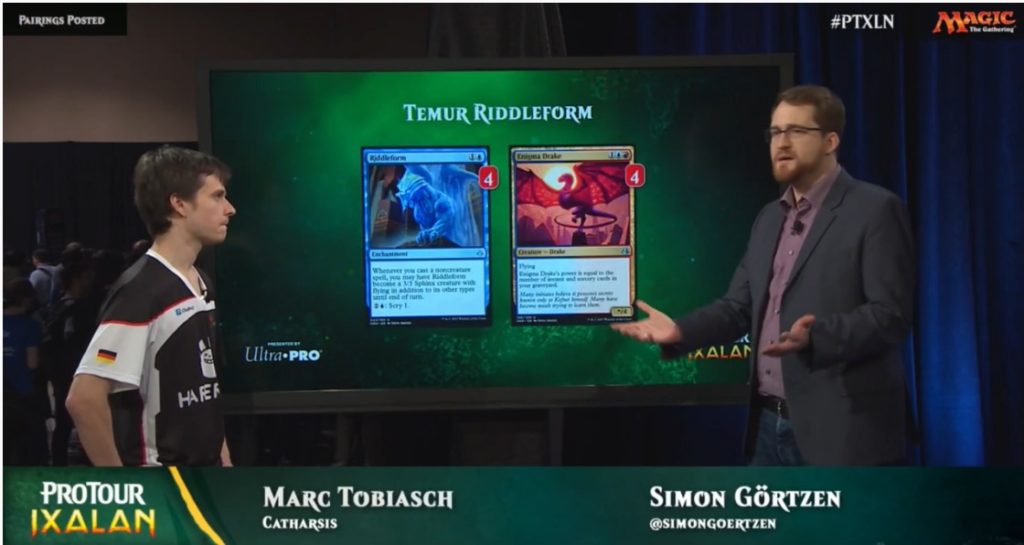 PVD takes this one in extra turns after Nassif receives a slow play warning.

This deck is similar to the BR Aggro decks, but without Hazoret and Lightning Strike to run faster and smooth mana handling. Adam says the Temur match up is good. 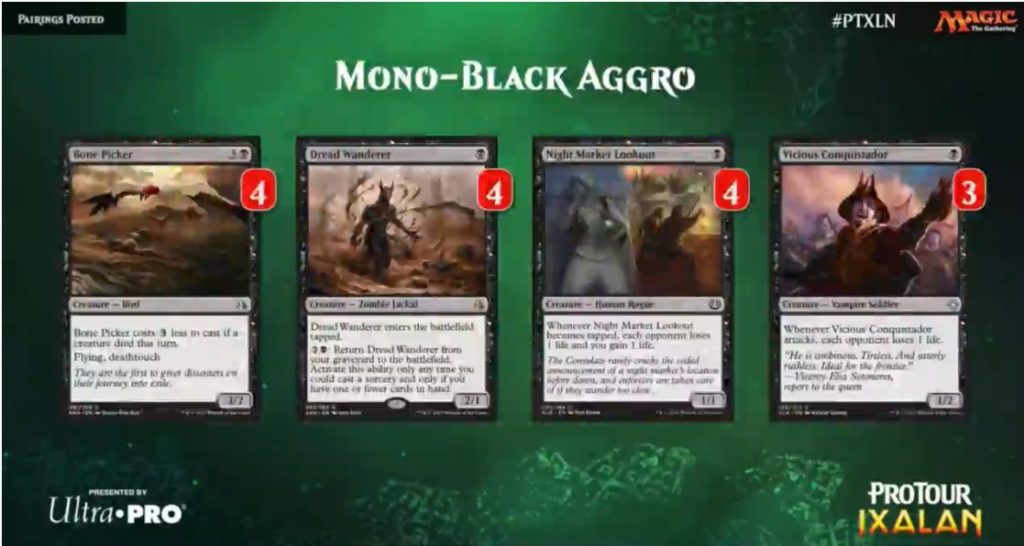 Both of these players came into this round at 7-0. In Game 1, 4C Energy withstands the early onslaught from Chun and takes over the game with Chun stuck on three lands. Game 1 to Han. In Game 2 Chun is able to apply a ton of early pressure, force some bad blocks from Han, and even things up. Chun takes the third game as well and puts red aggro at 8-0 on the day.

White vampires deck is now sitting at 6-1 facing BBD, with the first two games split already. Wilson manages to get to 7-1 and set up a potentially great weekend for a new deck.