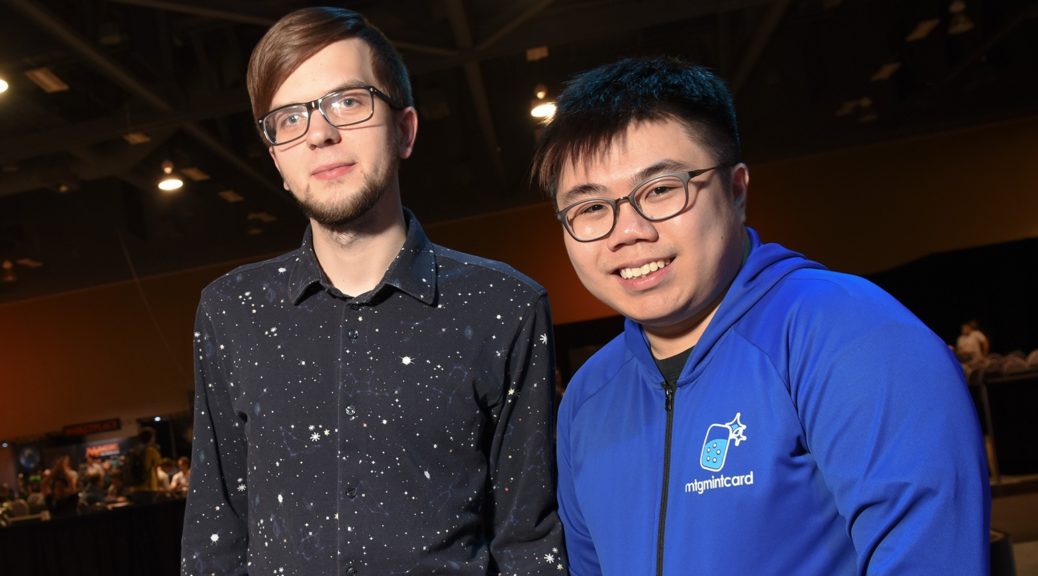 So what did we learn on Day 1 of Pro Tour Ixalan?

So far, the weekend looks pretty quiet on the financial front. None of the major teams seem to have broken this format, showing up with a deck that was capable of dominating the meta across the board. Rather we have seen a smattering of rogue decks rolling forward shoulder to shoulder with the established staple decks of this season: Temur/4C Energy and Ramunap Red.

As a refresher, here is what people brought into the tournament:

From the perspective of Standard management, this result has to be seen as problematic for Wizards of the Coast as the various energy decks combined for almost 50% of the metagame. Clearly the energy mechanic provides too much bonus value when stapled to otherwise normally costed cards and printed in enough depth to support multiple configurations. Because many of the cards in those decks are in common or uncommon, and have been known quantities for a while now, there hasn’t been much in the way of fresh action from the financial angle. It’s tough to make money on Attune With Aether but at least this format has been a bit cheaper than some previous seasons.

The Amonkhet block has provided the backbone of a couple of additional shells, including Ramunap Red (still good) and the constantly evolving God-Pharoah’s Gift decks. The decks heavy on cards from the block make up about 35% of the field. Angel of Invention was a mythic card from the Gift decks that also showed up in B/W tokens and put in some work on camera Friday, but has yet to show any price momentum. This seems correct unless multiple decks running the card push into Top 8 and/or win the tourney.

Thus far, the only truly interesting new shell this weekend was found in the hands of Wilson Hunter, who brought a mono-white vampire aggro deck that helped him get to 7-1 on Day 1. Financially, Legion’s Landing, Mavren Fein, Dusk Apostle and Metallic Mimic are likely the cards to watch here. Landing is already close to $5, so you’d be preying for $10+ to justify targeting play sets. Metallic Mimic is closer to $10 already, and feels like a definite sell almost regardless of what happens with this deck. Mavren Fein, Dusk Apostle is currently under $1, so that might be the right move if Wilson makes Top 8.

Vraska, Relic Seeker Setting up for $30?
One of the only cards to generate notable price movement Friday was Vraska, Relic Seeker. Closer to the release of Ixalan it was widely assumed that Vraska, as a six-mana planeswalker, would likely be relegated to the role of a single copy late game plan in some mid-range decks. Instead, we’ve seen versions of Abzan Tokens running a robust three copies in the main, occasionally leaning on the anti-enchantment capabilities of the pirate captain to clear out problematic God-Pharoah’s Gifts and Anointed Processions. In combination with one main/one sideboard demand from Sultai Energy, this has lead to an overnight 15-20% increase on the card, now sitting just over $20. Look for a potential jump toward $30 if the card features prominently in the latter half of the weekend as online inventory is already looking low as speculators wonder whether Vraska might be the next Gideon, Ally of Zendikar or Elspeth, Sun’s Champion.

Hazoret, the Fervent continues to show up in both Ramunap Red and the BR Aggro decks that make for a combined 25% of the tournament. The card can currently still be found for $16-18 and might be more deserving of a push to $30 than Vraska. Inventory seems stable so far, but if the Day 1 undefeated Yam Wing Chun pushes deep into Day 2 on the deck, then consider paying closer attention.

Heading into the five final rounds of Standard this afternoon, our financial radar should be tuned to whether the smattering of fresh decks have converted into Day 2 runs at a higher % than the more established decks and whether the rebel decks push deep and challenge for Top 8.

Follow along with us this afternoon as we keep pace with the pros to help you guys make and save some money.

We get to see Matignon (Jeskai Approach) and Maynard (UW Gift) going at it, but this is not a good matchup for Maynard, as Matignon counters both God-Pharaoh’s Gift and Refurbish every time over two games.

Baral, Chief of Compliance is a spicy addition to the control deck, doing everything you’d want early and late. Search for Azcanta looks great in this matchup too, but Baral has already enabled Storm in Modern. It would take a bit more play, or a lot more camera time, for the wizard to spike.

We are told that four Settle the Wreckage are in Matignon’s deck, and at only $5, that is tempting to deal with both Hazoret and The Scarab God.

Maynard has a couple of Hostile Desert in the deck, as a way to get use out of the lands shoveled into his yard, but I doubt it’ll get any traction this weekend.

The side match between PVDDR and Turtenwald highlight some variations in energy lists, notably a black splash for Glint-Sleeve Siphoner, a card that can really run away with a game.

Matignon is back on camera and the deck performs flawlessly, casting Approach on successive turns to look unstoppable.

The sideboarded games are another matter, and just a couple of Spell Pierces and Negates are good enough to get Mike Sigrist the match win. Notably, Matignon got Search down turn two in the game he won and didn’t see it either of the other games.

If Search gets down to $10 when we are done with Ixalan drafting, it’ll be a solid pick to bump up to $15 or $20 at this point next year. The casual demand for the card is leeching a lot of supply.

The secondary match is the delightful mono-White Vampires list, and a second deck using Angel of Invention might be enough to move this card.

Shaheen Sorani on a deck tech sings the praises of Supreme Will and Censor, and also has two Hour of Devastation, a sweeper not seeing much play currently. The one-of Field of Ruin is a bold choice! 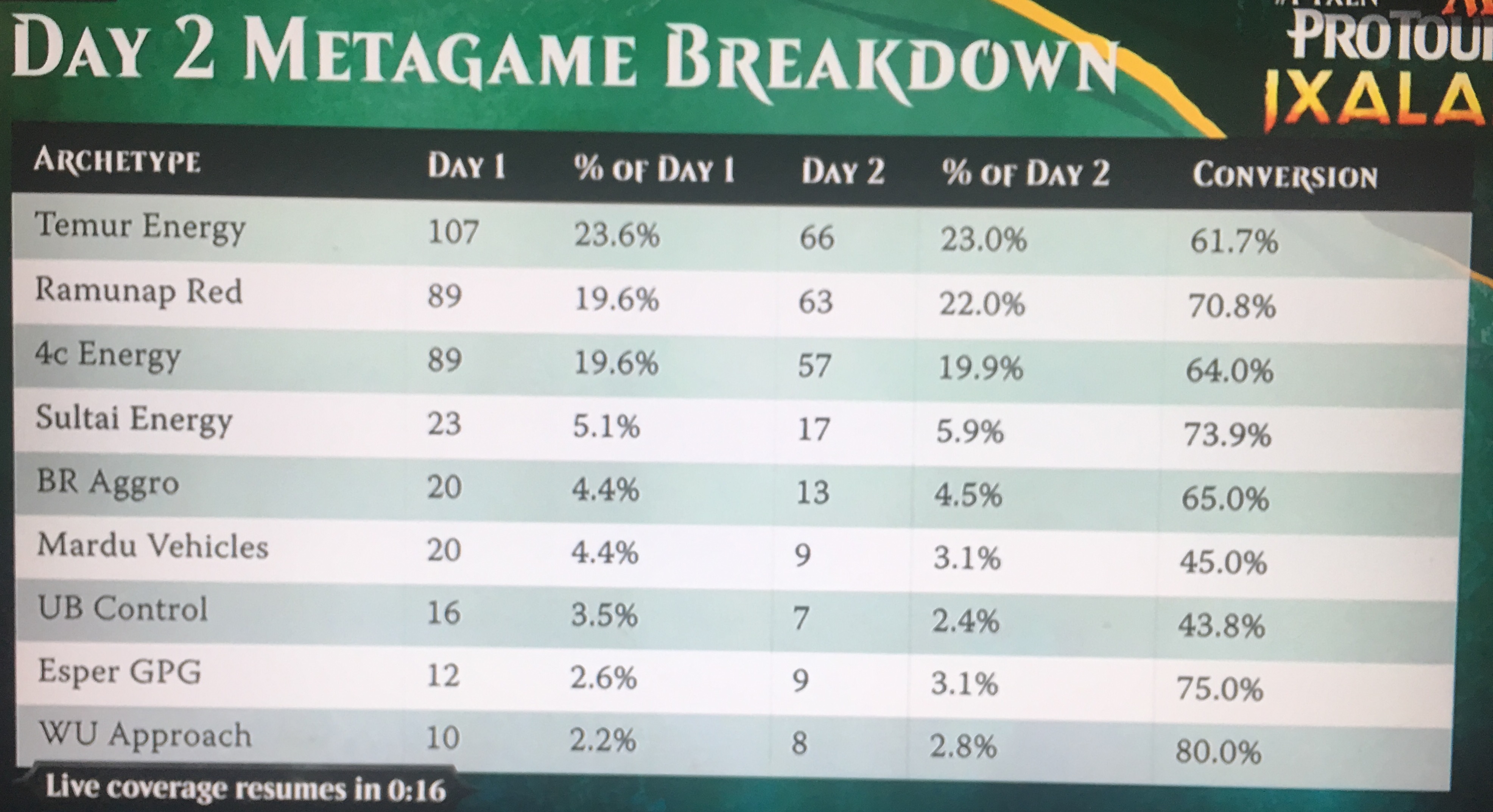 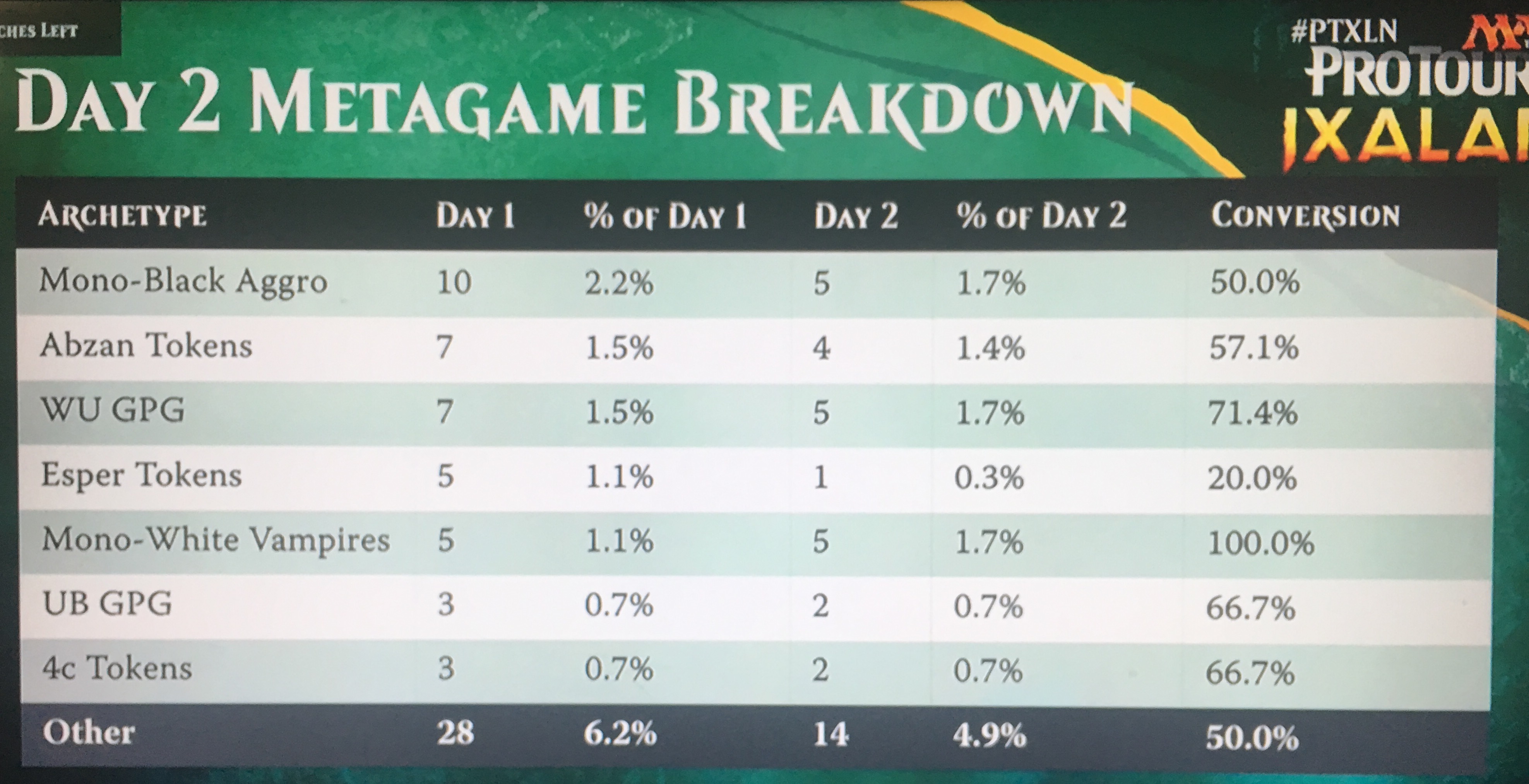 The breakdown shows how badly the Vampires deck and the UW Approach deck surprised the field. Five players are on the white deck and they all made Day 2! Mr. Fein, your spike is calling!

This is Matignon’s third round straight on camera, and he’s against Seth Manfield this time, playing a Sultai build of the energy deck.

On Friday, I highlighted Glint-Sleeve Siphoner as a card I loved going into the weekend, and it’s nice to see it providing a steady stream of cards for the 11th ranked player.

Settle the Wreckage looks terrible here, as those extra basics become fuel for Walking Ballista and Manfield takes the opener. Not a lot of decks are set up to use the extra mana, but this cashes in big. If this is all that we see from that card, then it won’t bump above its current $5-$6.

Winding Constrictor and Longtusk Cub win game two for Manfield, who didn’t even need the Blossoming Defense in hand.

Lots of these decks are running Nissa, Steward of Elements as a sideboard card, and the amount of camera time she’s getting will likely bump her to above $10 by next weekend.

Only 3 Approach of the Second Sun

“The Innovator” showed up with the instant-win combo of Sunbird’s Invocation and Approach of the Second Sun. As he pointed out, if the Invocation is out and you cast Approach, then reveal a second Approach, the one you cast first will win you the game.

The rest is removal, and if the Vampires deck takes off, Sweltering Suns seems extremely well positioned to see a lot of play and spike in price.

Angel of Invention is putting on a clinic, and if Maynard gets the Top 8 berth then the Angel might jump over $10 soon. Game one to the man who picked the foil Goyf at the GP Vegas 2015 Top 8 draft.

Game two, Maynard hits Replenish on turn four and cheats the Gift into play, but can’t force the game to go long, and Turtenwald runs rampant.

Game three is extremely swingy, and some extremely difficult decisions from each player. God-Pharaoh’s Gift is a very powerful strategy that doesn’t play four of its namesake card. It’s not even legendary, but if it was a four-of then it would have potential financially.

Wilson Hunter is one round away from making Mavren Fein a $5 card. It’ll be hard to buy in the $1 range now and turn it around for a profit, so your play is to take all the bulk copies you have handy and dump them in trades or buylists when they spike. The profit you’re going to get otherwise just isn’t worth it.

Kentaro Yamamoto is on Ramunap Red, and he’s playing Owen Turtenwald. This is one of the defining matchups of current Standard, and it’s exciting to watch, even if not terribly financially relevant.

Yamamoto wins in three games, and the only card of interest was a Harsh Mentor showing up from Yamamoto which didn’t do much damage. The card seems good against the Cub/Hydra/Virtuoso abilities in Temur though. It’s rather niche, but it’s got potential if that’s widely adopted as sideboard tech.

Ihlenfeldt has some Dusk // Dawn action and it is a super solid card in this deck, so if he makes top 8 that’s got strong takeoff potential as an answer to much of the Temur deck. He also uses the Dawn side to return two Walking Ballista to his hand, and that ends up winning him the match.

Clearly Dusk // Dawn is the financial winner from his deck, and at $1.50 it’s got a lot of room to grow. Let’s see if he makes top 8, and get ready to sell into the hype if it lands!