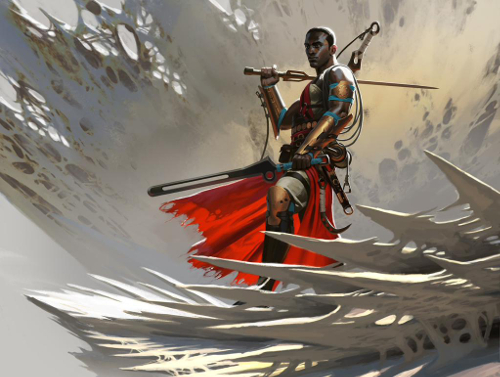 
I do like to look back at a year and look forward to the new year.

It’s been a crazy time for me, as I have had a lot of upheaval in my personal and professional life, but here I am, chugging along at this, the habit and hobby that has treated me so very well over the years.

Let’s start with a review of last year’s goals:

Nope, hasn’t happened, but to be fair, I only played in one GP main event. I’m starting to think that the value isn’t there, for the main events anyway. This is a discussion that a lot of people have, and I strongly suspect that the prevalence of team events is a way to fire up interest. Plus, a lot of times, the main event (especially if it’s Sealed, I don’t have the competitive fire to play the same Modern or Standard deck for 15 rounds) just feels like wasted time when there’s so many awesome side events to be doing. More on this line of thinking in a moment though.

Mostly accomplished. I’ve taken profits out of my collection in order to fund new acquisitions, and that’s been a delightful time. I’ve given myself some treats this year, especially after 2016, a year in which I sold off a lot of things at a very good price. It’s true that if I’d held, I’d have made more on some of them, but reprints have been fast and furious this year. I don’t feel jilted, or upset.

Holy crap did I accomplish this goal. I started with a card I loved but I could never draft it or if I did, I never got the deck for it: Winding Constrictor. I started looking for other build-around cards, and that led me to a theme of only uncommons. (If you’re interested, the list is here.)

I’d enjoyed the Cubes of others but building one has shown me the ridiculously high EV of having my own Cube. I’d rather Cube than any other format, hands down. I’m less fond of busted formats like the current Vintage/Holiday Cube on MTGO, but that is always an eye-opener of an experience.

I would strongly advocate that you build a cube that you can update. Vintage Cube gets a couple of cards with each expansion, but mostly afterthoughts. Pauper Cube, or Frontier Cube, or Tri-Color Cube, those get some great new cards with every set that comes out, and it’s super fun to curate your own list.


#4: Treat Magic as a social event, not just a game or a financial transaction.

Super accomplished. It’s easy to lose sight of the social aspect, given the financial angle and the competitive aspects of the game, but for me, this is always going to be social.

Like a lot of other players, this game has been the gateway for me to meet some of my best friends. I didn’t get to play a lot while my children were young, and with them being a little older, I’m able to go out and be me again. Getting divorced was (and is, the process takes FOREVER) painful, but I’ve got a support system of friends who know that sometimes I need a good twenty minutes to rant about Cyclonic Rift and why it needs to be banned.

So what about this coming year?

I haven’t yet built a Cube that contains multiples, often called a Draft Cube. I’m arguing with my friends about how I don’t want the logistics of the 5 copies per common as opposed to 4, but the framework is in place. I want, very badly, to have it be evenly split between the three Un-sets but they are such different animals and have very different ideas of design.

I’ve missed both big GP events in the desert, and this year, with my summer break coinciding well, I’m determined to make it out there. I also want to try and hit up another American GP, likely on the East Coast but that’s in the air.

#3: Meet Travis and James and Jason in person

Strange but true: I’ve been writing for MTGPrice for four and a half years, I think Travis came on a month before me, and James not too much later, but we’ve never crossed paths in person. I don’t have a particular motivation, and I hope this happens at GP Vegas.

I hardly ever go deep on a card, not since the grand burn of Prophet of Kruphix. I’m content to pick up a couple playsets, tops, and instead of keeping boxes full of toploaders/cases, I like using an old binder, some penny sleeves, and a Sharpie for keeping track of what I bought, when, and for how much. I am not yet in large enough quantities that spreadsheets are needed.

I have a confession to make: For the last few months, when I’d write up a piece, I’d go on TCG the night before and I’d fill my cart with the cheapest NM versions of cards I wrote about. Usually, the bottom 8-10 copies, give or take.

Then in the morning, about six hours after I post my writing, I’d check the cart again and mostly they’ve been sold or relisted. Some of you really like my work, and that makes for an ethical quandary for me. I don’t have extra information. I make my picks based on my experiences, which have been right and wrong. On MTG Fast Finance, you’ll hear us disagree on picks sometimes and we rarely get immediate closure.

This is a personal view, and not one I’ve talked about: I don’t think I should buy the cards I pick right after I pick them. It feels wrong to me, and I know that’s an irrational feeling. There’s a lot going on in my head, not all of it makes sense. I don’t want what I own to influence my thinking.

It also feels slimy to pick a card, extol its virtues to you, the audience, and then buy some up as part of an artificial hype wave.

That said, this year I’m going to wait a couple days after posting and then grab some copies. There’s going to be some hot cards coming up, and I don’t want to get left out because of some weird self-inflicted moral code.

Foil Solemnity ($8): The nonfoil is just $2, and that’s pretty tempting, but I’d rather get the foils. This is a card that’s already part of all sorts of shenanigans, as Phyrexian Unlife makes you immortal and Decree of Silence locks the game unless you’ve got Abrupt Decay. It hasn’t been truly broken in tournament play yet, but it’s a small-set rare with a 4x multiplier and with each card that comes out, it gets better and better.

Thoughtseize ($14 or so): Well, I’d hoped for $10 but we’re two weeks away from Rivals of Ixalan and there’s one NM on TCG at $13. I’m going to try my luck at GP Santa Clara, trying to get a couple of playsets for $45 or $50 by offering vendors cash and haggling, which sometimes works and sometimes doesn’t. I’m an optimist, and I also have to accept that we’ve reached bottom. Grab your copies now, people!