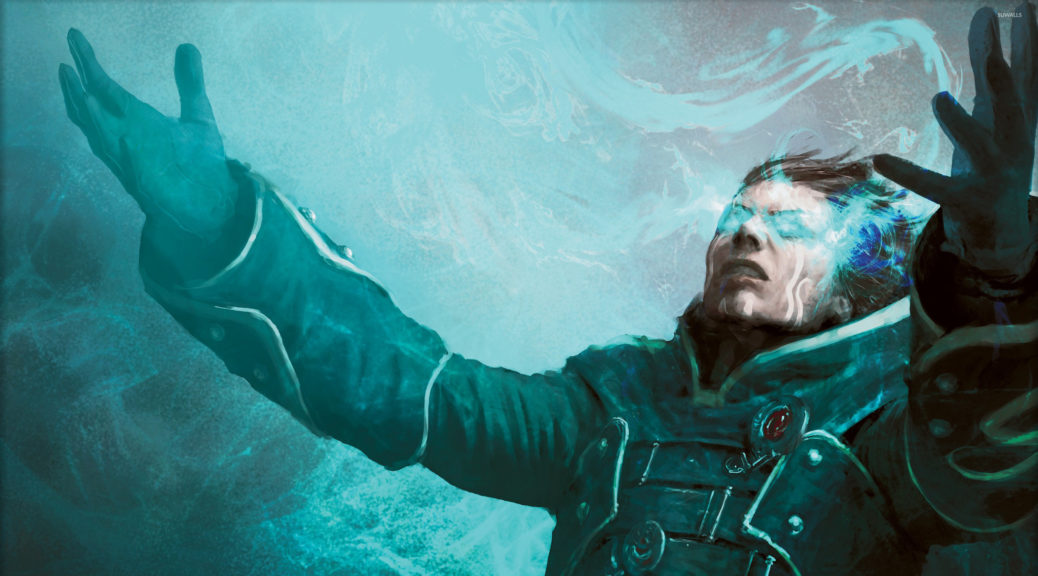 We good? Any more questions?

Look, if you’re going to insist I write an article this week, we’re going to have to pick a different topic. That’s handy, because I noticed another deck that isn’t new nor are most of the cards in it and I think that’s a good thing. New cards printed in Ixalan block, specifically Rivals of Ixalan have renewed interest in an older Commander because those cards are perfect for an older archetype, though not much else. What happens when cards are printed that are super narrow but seem laser-guided to one established deck? Well, those cards themselves are likely to be pretty worthless financially unless they make an impact somewhere else, but they get people interested in an older deck and that’s worth talking about.

So what’s my thesis today? I’ve been doing this long enough and tracking my older predictions long enough to know what actually happens in cases like this and what happens less often and what happens even less often so I’m going to season my predictions with my experience. I’m going to say “this could go up” less often than I used to because by now I have a little bit better of an idea of what it will take and what has the goods. 50% of the cards we’re going to talk about  are going to likely go up, maybe a little maybe a lot, based on more people building the deck based on it being popular on EDHREC and the cards coming out being so good in it. The other half are cards that were going to go up anyway but I hadn’t really thought about them until I saw people played them in this deck and that reminded me to talk about how the card is at its floor. Both of those are equally valid. You’re partly paying me to think through some stuff for you because you don’t want to understand EDH finance and you’re partly paying me to remind you of cards you might have thought were good pick-ups but forgot about because there’s a lot going on.

Let’s get into the money part. 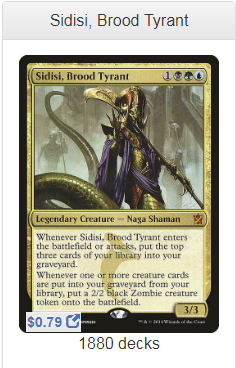 So this has been a commander for a while and it’s being built an OK amount. Per EDHREC’s current sampling data, Sidisi is the 11th-most popular deck so the current number of decks in the database is a little misleading. For reference, there are currently only twice as many deck for Atraxa in our database. This isn’t a problem; remember, we have always used those numbers to establish ratios rather than look at the numbers as absolutes. The numbers help but the more you use them qualitatively and the less you use them quantitatively, the happier you will be because you will get confused by the data less. Yes, I realize I am implying I use “numbers” which have absolute values, qualitatively. Sidisi having 1,880 decks registered on the site is an exact but fairly meaningless amount without context. Quantitatively, that’s about half as many as Atraxa, which has the largest number of decks registered in the database. Qualitatively, we have enough Sidisi decks to bother looking at the cards in it. How’s that grab you? See why we’re not sweating absolute numbers a ton? It doesn’t do us any good. There are only 10 Commanders more popular on the site so let’s assume there are enough Sidisi decks for us to care about it. So what’s new?

Having lots of different data displayed can tell you a lot of information. When you list the most popular decks of all time, Sidisi is 11th. When you look at most popular this month, Sidisi jumps to 9th. When you look at this week, Sidisi jumps to 6th. That means that while Sidisi was always pretty popular, something has changed in the last few weeks. Of the 10 decks more popular than Sidisi of all time, 4 of them haven’t had a new deck registered in the last month and 7 of them were less popular than Sidisi this month or week despite being more popular all-time. Something happened. I submit that the printing of these four cards in Rivals of Ixalan gave the deck quite a boost.

Milling yourself is pretty handy in a Sidisi deck, and giving yourself a chance at a Sidisi trigger every time you attack and bringing your milled lands back from the dead is so useful it feels like World Shaper was tailor-made for this deck. Other decks could use that ability, sure (I personally can’t wait to pants people with Admonition Angel) but World Shaper has been making Sidisi players salivate since it was spoiled.

Journey to Eternity is a great way to keep an important creature alive or just use as a sort of Pattern of Rebirth that gets you a utility land to bring back important creatures over and over. Your graveyard becomes a bigger hand with cards like Journey.

Path of Discovery is another card that seemed tailor-made for Sidisi. In fact, I started tracking how many more people were registering (I don’t have a good way to differentiate between people re-registering an old list or making a brand new one but new interest is new interest) Sidisi decks based on the spoiling of this card. It’s not great elsewhere but it’s dumb here.

Nezahal I could take or leave. What, 3 ridiculous bomb inclusions isn’t enough? It’s enough. Now let’s look at what I think could go up. 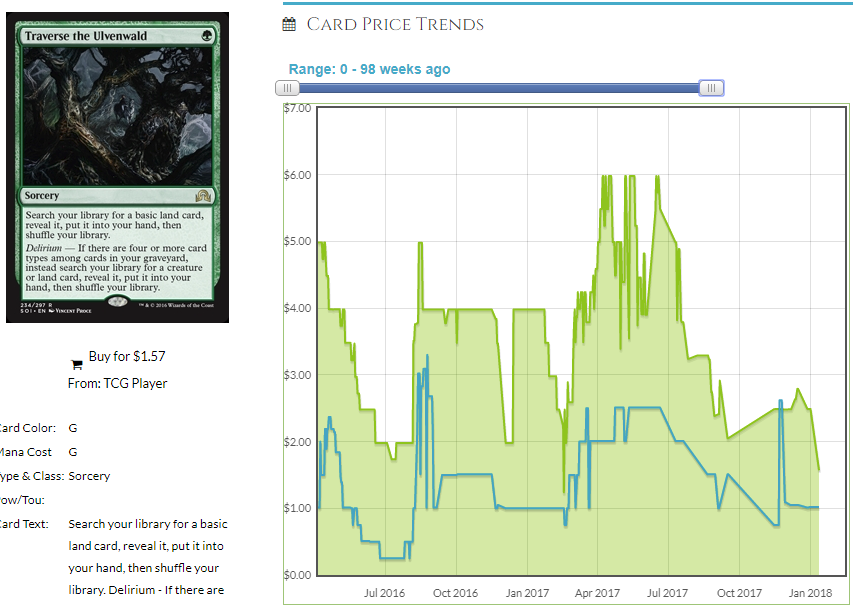 A historical low for a powerful, 1-mana tutor played in Modern and EDH? Okey dokey. Sign me up for all of the copies. I don’t know if this can get any cheaper but I don’t think you worry. Spend what you can and if it does get cheaper, borrow money and buy even more. There are a lot of copies to soak up but this card is just too good and with it doing such a good impression of Worldly Tutor for a few bucks, I expect people will be getting up on this. It has pretty healthy EDHREC metrics, too. 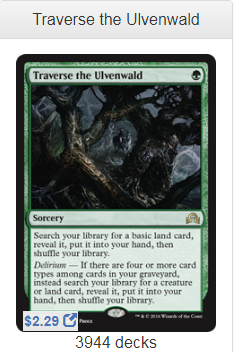 Worried about the glut of copies? 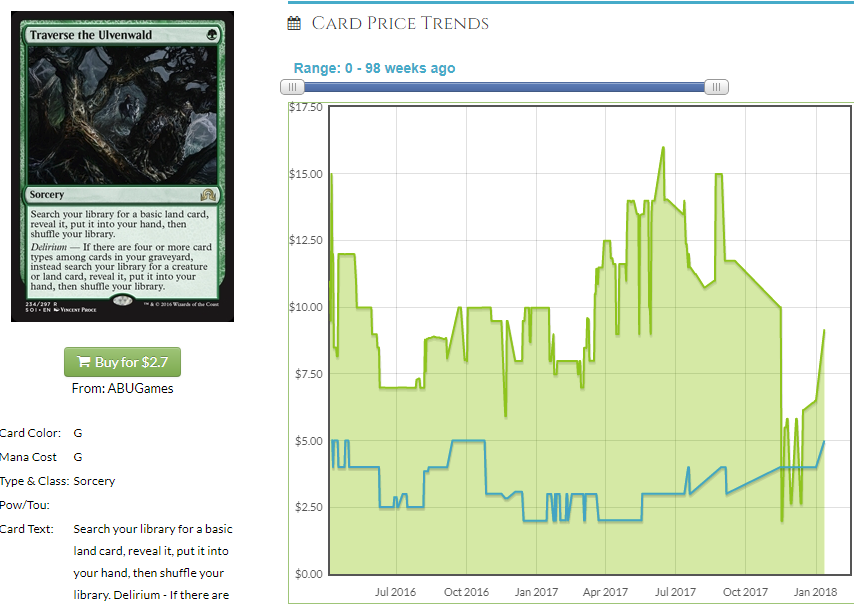 Maybe you shouldn’t be. The foils are almost gone and the price is beginning to flirt with $15. That’s going to be a 10x multiplier soon. This is as good as I can feel about a card. If you have $100 extra bucks, buy those last few foils from eBay or stock up on the non-foil copies. Either way, this card will pop and it will be really obvious in hindsight. Instead of saying “I knew this would happen” in a reddit post like an unhelpful person, I’m telling you what will happen before it does so there is still time to buy copies for yourself. You’re welcome. 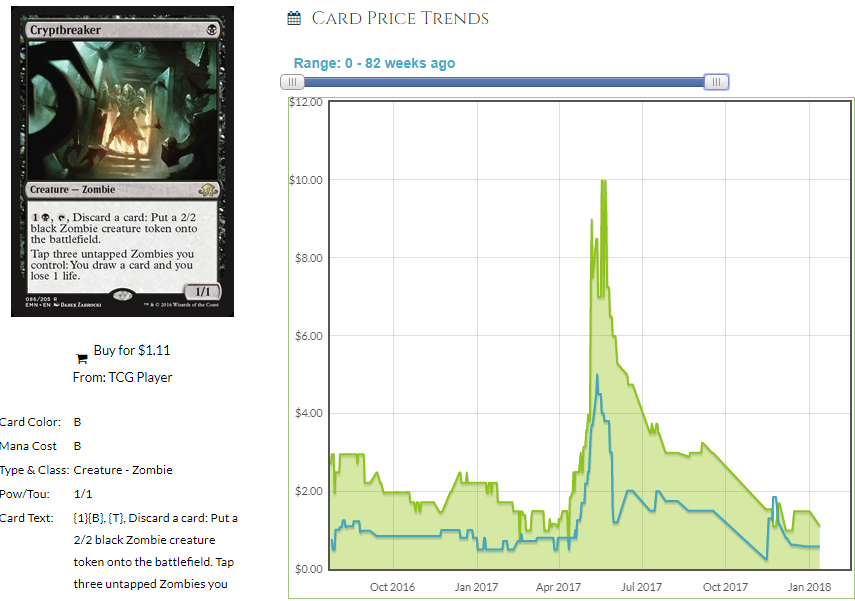 Speaking of cards about to bottom out, this is a card that deserves a look. Not as reprintable as typical Zombie staples like Undead Warchief or Cemetery Reaper, this is a shoo-in for Sidisi decks. It’s a discard outlet, Zombie-maker and card-drawing outlet all in one card that happens to be a Zombie itself, so you can tap it to itself. 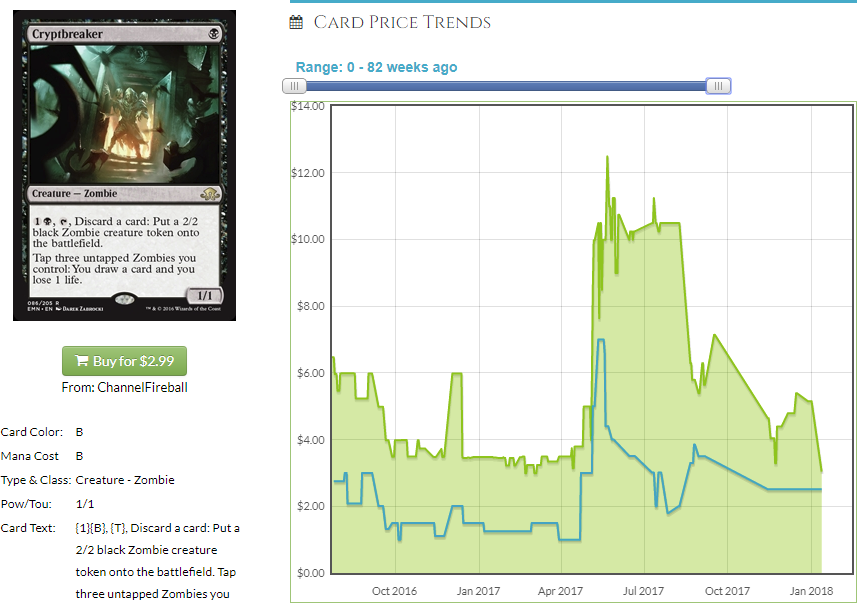 Foils got a bit crazy last summer but that just means another spike will be harder because dealers are sitting on a lot of copies so there won’t be cheap ones to back-fill demand.  I think this could hit that same value again, albeit getting there slowly but more organically and maintain it. I don’t think this card is a reprint risk and the moderate-to-low risk (if we’re being very conservative) is further mitigated in the case of foils. I realize we’re going back to doing core sets. I also think this is safe even in that case. 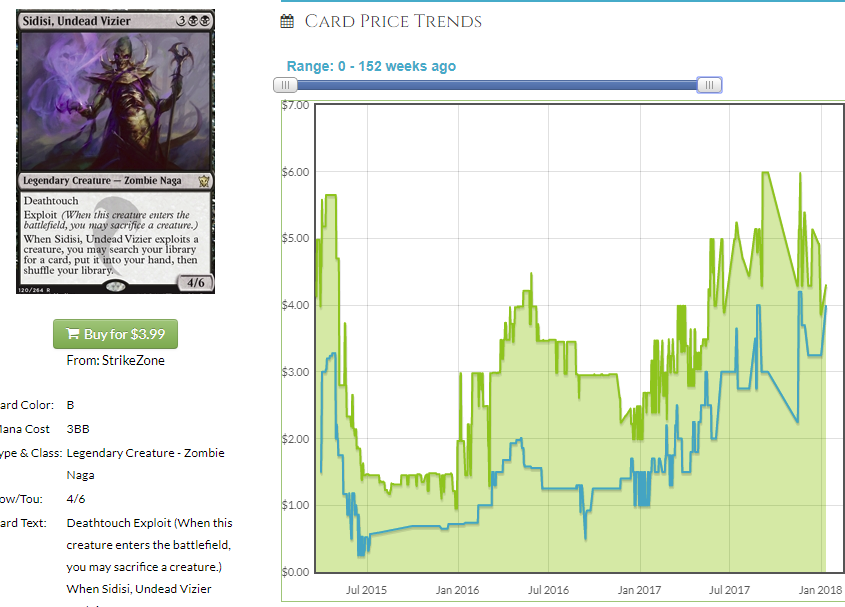 I stopped paying attention when this hit $4ish then started to crater. I sort of got distracted a little when it hit $2 and that sucks because it has basically doubled up. this demand is organic and the blue line representing dealer buy prices is going up right along with it which means no one thinks this is done growing. No one is out buying Dragon’s Maze of Tarkir packs so what was busted was busted and copies are drying up. This is a good card in its own right both as a Commander for people who love mono-Black decks that can tutor for stuff and creatures that have good abilities and it slots into a ton of black decks. I wish I had noticed this was creeping up last summer but I’m making up for it now. It’s basically removed a lot of the speculation I would have done about whether the demand would be organic. With all doubt removed, get on board. You can’t realize a double up since it already did that, but there will be growth and in the mean time, you have great binder candy. 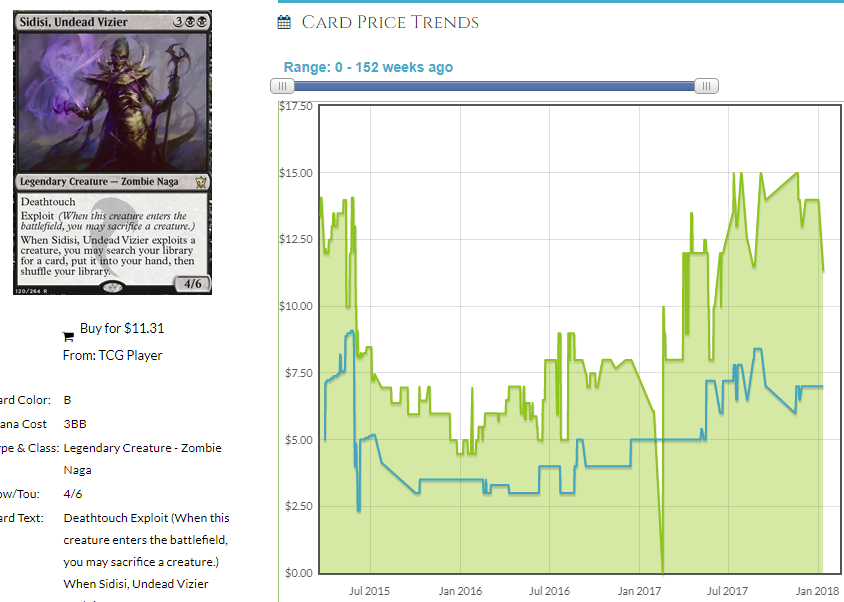 The foils are a little trickier, having basically grown at a rate that outpaced dealer confidence. I don’t think the price will come down a ton but dealers don’t like it at its current price, which is too bad. Still, with this being a bad set that wasn’t bought a ton, non-foils are probably pretty good given how few copies there seem to be out there. I’m a seller in foil and a buyer in not. If the foils go up some more, whoopie. You would have made more money buying Traverse.

That does it for me. As you can see, the implications of the unbanning of Jace and BBE reach far and wide, even being felt in an EDH deck where card prices are going up for an unrelated reason. As always, check out the page for Sidisi on your own and try and use my method to scope out cards on your own. Got a spec idea I didn’t mention? Run it by me in the comments. Thanks for being a reader. Until next time!