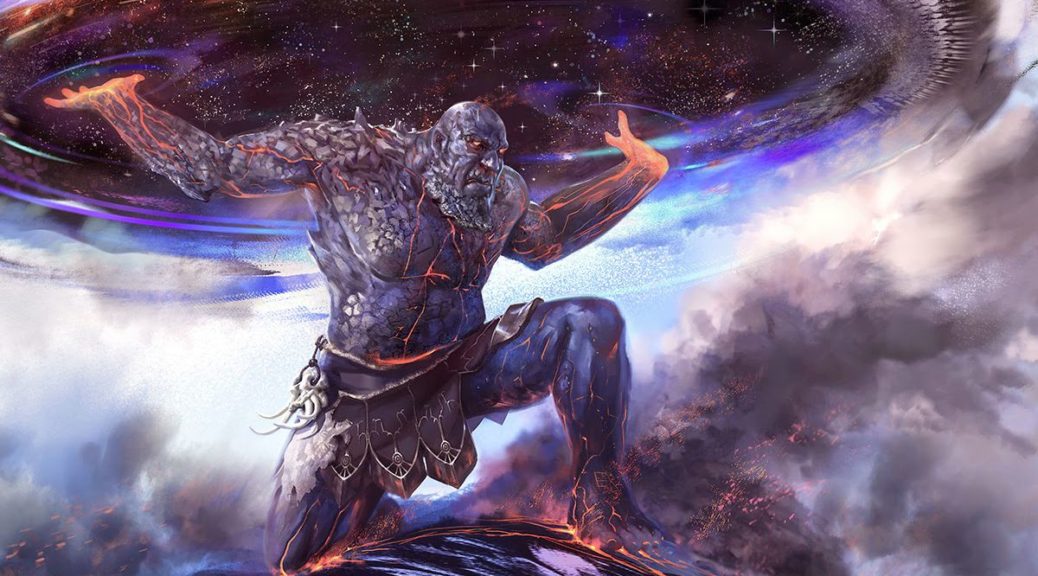 While we got the MOCS this weekend, which is a Modern/Draft format, it’s important to remember that we can’t take too much away from it. It’s a small tournament, maybe 24 people, so the metagame gets wonky. This was evident in Bogles showing up as the second most-played deck in the room. This isn’t the type of strategy that professional players are typically inclined to select for major events, like a GP or a Pro Tour. It doesn’t give them enough space to make full use of their skill as a player, and the variance is likely to catch up with them over the course of sixteen rounds. However, in a room with so few other players, where everyone is an accomplished pro, things are a bit different. You’re playing fewer rounds, so it’s easier to get lucky. Everyone is a talented player, so you don’t necessarily have that edge over most of your opponents. And perhaps most importantly, if you’re able to peg the metagame, showing up with an otherwise odd deck that’s well positioned against the most common deck in the room is a huge advantage.

All of this means that just because there were so many Bogles at the event, it doesn’t mean you should think 20% of the Modern meta is going to turn into Bogles. There is value in the event as an indicator of the format though. Jund was the most popular deck, and that wouldn’t be the case if players didn’t think it was the most powerful strategy there.

When Bloodbraid Elf and Jace were unbanned, there was a mini run on Celestial Colonnade. Players that wanted to play Jace knew they would need the land that has followed him through most constructed formats. People were hesitant to go too deep though, since Masters 25 was around the corner and a reprint would have sucked.

Once the full spoiler hit and the Worldwake manlands were confirmed absent, prices pushed harder on Colonnade, and non-foils are sitting around $60 today. Most importantly, copies are selling at that price point. Meanwhile, Raging Ravine got some attention as well, with the price having been hanging around at $10 in the middle of last month, and it’s at $25 today.

As wild as this is, I’m here to tell you I think it could keep going. Jund was a big part of the MOCS, and that’s no mistake. Whenever Bloodbraid has been legal, Jund has been a tier one strategy. Add in that it’s got a few new tools that weren’t there before, and it’s looking even better. And rare is the Jund deck without Raging Ravines. You’ll see four occasionally, while three copies is the most common quantity you’ll see show up.

Jund has already begun to show that it’s back in Modern and it’s a real contender. As players who haven’t been in the format since the last time Jund was legal begin to move into the deck, the few Raging Ravines left are going to continue to dry up. Ravine has no more stock out there than Colonnade — in fact, there are fewer copies, since it wasn’t a buy-a-box promo. Is $60 in Ravine’s future? Maybe. That’s a big jump. But $40? That doesn’t seem far fetched to me.

Remember thirty seconds ago when I said Jund has some new tools available to it? This is one of them. Kolaghan’s Command is on the very short list of best three drops in Modern to cascade into with BBE.

Shock? Well hey, that kills opposing BBEs, Dark Confidants, Oozes that haven’t eaten yet, Flameblade Adepts, Noble Hierarchs, you name it. Return a creature to your hand? Well how about your first BBE that got Bolted? Or a Confidant? Or a Tarmogoyf? Discard a card? I’m putting a 3/2 haste onto the battlefield, killing your guy, and making you discard a card. That’s a three-for-one for all you keeping track at home. And finally, artifact removal. More limited in its application, but when you need it, boy you’ll be glad you have it.

Kolaghan’s Command is always going to be valuable coming out of a Bloodbraid, even if you have to settle for discard and shock them. Since hey, if you’re casting BBE into Command and you haven’t had a creature die yet and they don’t have anything to shoot, the game sounds pretty good, doesn’t it?

We’re not getting any more anytime soon, and nobody is rushing out to crack Dragons of Tarkir at the moment. We could easily see Kommand add on another $10 (or more) as one of the best spells in Jund over the next few months.

This one is a bit stranger than the others, but it’s where we find ourselves.

RG Ponza, or for the uninformed, RG Land Destruction, is a strategy as old as time. Blow up some lands, attack with some dudes. A good time was had by all.

In the last few months the strategy has been slowly gaining ground after having been relegated to the tournament practice room on MTGO. It’s getting more and more popular though, and with a rise in Urza Land decks and Celestial Colonnade decks, hampering your opponent’s mana development is looking better than ever.

Most of the deck is familiar ground, or at least, familiar cards. Some Arbor Elves, Birds, Titans, Blood Moons, Stone Rains, etc. Everything here has been printed several times. Except for one particular spell that’s always a four-of — Mwonvuli Acid-Moss.

It’s probably not the first card you’d expect to see a strategy such as this play, as you might expect it to reach for Molten Rain or Fulminator Mage first. Apparently costing one extra isn’t an issue though, and fetching your own land as part of the deal means you get to go slam one of those Titans in your hand into play a little earlier — say, turn four.

Acid-Moss has a single printing from Time Spiral. It was a common, so there’s a fair supply out there, but we’re now 12 — yes, 12 — years past Time Spiral. Without another printing, and an existing casual demand for land destruction as it is, Acid-Moss copies have been draining for awhile. It was $2.5 to $3 a few weeks ago, and has recently started to push up towards $4 and $5. Where you can find them at $4 they’re likely a safe pickup. They’re not showing up in the Commander Anthology. They’re unlikely to show up in other products as well, since Wizards doesn’t care for land destruction much. It’s not to say it won’t, but it’s got to be low on their list of things to reprint, and it’s not something they’re eager to include anyways.

As this deck is going to have a smallish but dedicated fan base and is otherwise fairly inexpensive, Acid-Moss is positioned to keep riding the “hard to find common” train up towards $10. And if it shows up in pauper? Well then hey, the sky’s the limit.