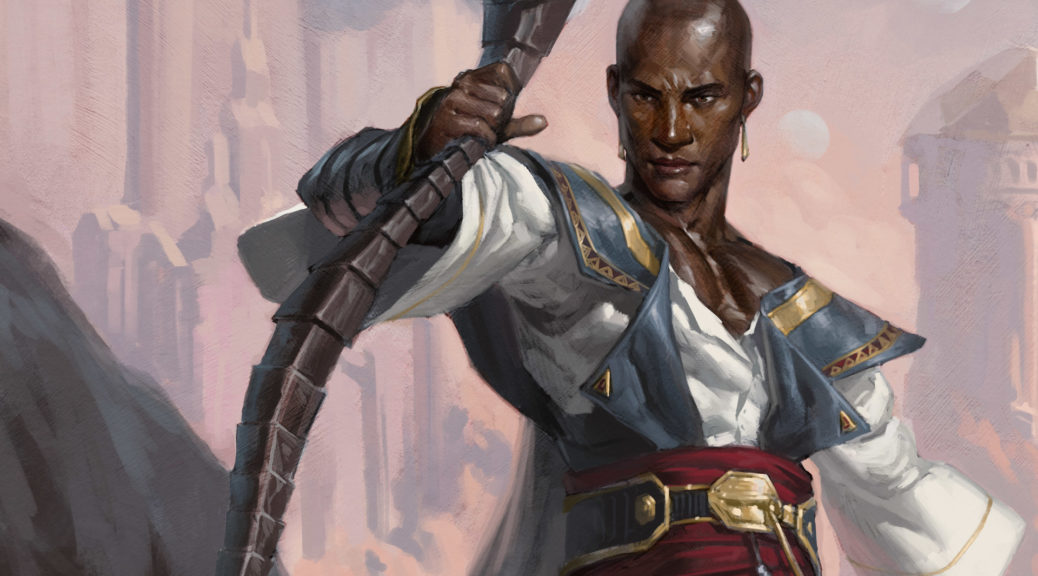 It’s here! Finally, after waiting untold years, we’re back on Dominaria and we have a whole lot of new cards to look at.

Today I’m sampling preorder cards and looking for bargains, though I’m fully aware that most preorders are a bad idea.

Let’s not wait, or talk too much, but just dive in!

Karn, Scion of Urza (about $32 preorder)

At first blush, you see five loyalty jumping to six and you’re super on board, but the problem is that new Karn needs a lot of help to be good. Even his -2 is going to be pretty lame unless you have lots of artifacts. Your worst-case scenario is making two 2/2 tokens over two turns for four mana, and unfortunately, that’s a common sorcery in this set.

Your best case is that you’re getting a card a turn, and that has potential, especially if you played a mana dork in the first two turns. Giving your opponent the choice of cards is always bad for you, but you’ve got the elegant -1 ability to get it back.

I would like to see this in Modern Affinity, but that’s super-niche and unlikely.

As for his price, the $35 isn’t going to hold. It’ll drop, and affecting the board is hard for him, so he’s never going to be a four-of. He’s got some amazing play in Commander, and I can easily see him getting out of hand in Brawl. I’d imagine he stabilizes around $15.

This is a little too on-the-nose price-wise for me. He’s instantly one of the best things to do in a WU deck, where defending him and getting the ultimate seems like the best plan ever. His plus ability helps you use the extra card, and we are getting Seal Away, making them best buddies.

As a two-or-three-of in only one deck, he’s never going to have a huge price, but he’s another planeswalker that Doubling Season works really well with, allowing for instant ultimates and enabling all sorts of shenanigans.

It’s possible he drops to $10, but he’s going to see just enough play to keep him between that price and his current price of $15.

I’ll say it: I think this is not as good as many people think it is, especially for Standard and Modern.  The only cheap legends people are playing with in Modern are Thalia, Guardian of Thraben, Jace, Vryn’s Prodigy, and Kataki, War’s Wage. We have some three-drop Lilianas, but one extra mana on turn three (after dropping a Liliana) seems terrible to me.

Standard is a different animal but the design of this card means that you need to drop Shanna, Sisay’s Legacy on turn two, and then you can add a one-drop to the board. Hopefully. It’s not an accelerator, it’s a fixer, a helper, and being legendary it’ll never be a four-of by itself.

Same thing for Commander: It’ll be good, a fixer, but very hard to play early and use in a broken way. Note that Legendary Lands do not allow this to be used, and Mox Opal doesn’t count either. As a result, I suspect this will end up in the $15-$20 range.

The enemy checklands (Isolated Chapel, etc, all around $4)

The mana for three-color decks is pretty good now. Having one Island out means you can have four other colors of mana come into play untapped. I strongly suspect that Esper is going to be the combination that takes over, given Cast Down, Search for Azcanta, and Seal Away as good cheap plays and the ease of mana.

This set of reprints has come along at the perfect time, and I think Isolated Chapel will climb the highest, to around $7. The rest are going to creep upward by a dollar or two.

I would buy my playset now of either of these. We haven’t gotten to a point where people are playing enchantment hate, and we don’t have incidental hate (such as Dromoka’s Command) to clean these up.  These are going to see a LOT of play, as I wrote about last week, and somehow these are super cheap. I don’t think they will get expensive enough to make a huge profit on, but if you’re going to even possibly play Standard in the next year, get these now.

They are going to spike to $3, maybe even $4, but then trickle downwards.

She’s better than Baneslayer Angel, who had very specific protections that didn’t help much. Lyra offers a very powerful set of abilities, a top end that is hard to argue with in most decks, and nearly impossible to tangle with in combat.

Importantly, she’s immune to Cast Down, though not Vraska’s Contempt. I hated losing Baneslayer to Doom Blade, because that gap in mana spent is the easiest way to get ahead in a game.

People would play 3-4 Baneslayer in a deck, and I think the max for Lyra is likely three. She’s a mythic, and a great Commander for an Angel tribal deck. I think her price will drop some, but not too much.

We haven’t gotten a printing of this since FTV: Twenty in 2013, and not in a booster pack since Magic 2013 (released in 2012), which means that the originals are about to take a bath. Those had made it to the $13 range, but with this version at $4 that’s a gap that won’t last long.

I actually really like picking this up at $4. even if I do wish they had kept the FTV art. This is one of the best cards to cast in Commander, enabling all sorts of stuff no matter the number of colors.