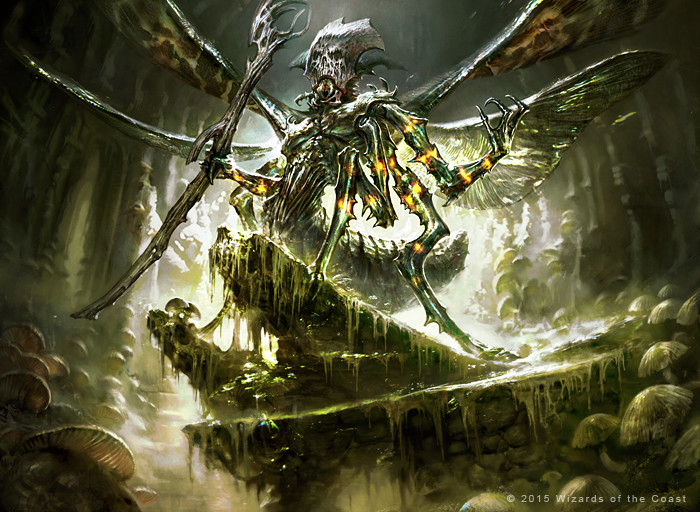 I wrote a pretty… cynical(?) I guess article this week on Gathering Magic which comes out the same day this article becomes free for everyone to read. I feel badly for the team that slaves away making a gigantic, expansive world filled with characters with rich, detailed backstories so that the Magic community can look at all of it and say “Lol when’s Fblthp getting his own Planeswalker card?” I went on a bit of a longer rant than that so if you’re interested in reading what is easily the most acidic and unprofessional article I’ve written on Gathering Magic where I’m usually pretty cheerful-sounding because I want to keep my job, check that out.

I won’t rehash my screed here but it seems like the new, stupid meme from the /r/magictcg gang is that they’ve thanked Richard Garfield for coming out of retirement and helping to design a set with 137 brand new Legendary characters by making a huge, semi-ironic deal out of the fungus monster named Slimefoot. I said on GM that “When you think about it, Slimefoot is a fungus-covered freeloader who spends all of its time in the dark, making it the perfect mascot for the online Magic community” and if it hadn’t been for Gathering Magic, I likely would have added that some fungi are asexual, much like everyone who posts on the main Magic subreddit.

But enough about why Slimefoot’s ironic hipness is an affront to the people who slaved away building an expansive world for Magic players to ignore because they’re basically monsters, let’s talk about how Slimefoof is actually a legit card and could be a good candidate for making some cards go up in price. Let’s do that thing I’m always doing where I make a bunch of really accurate predictions and toil in obscurity because  6 years ago I decided, erroneously, that I would be taken more seriously if I wrote for an established website rather than making terrible videos on YouTube. I’d be Lion if I said I didn’t regret my decision.

People are beginning to publish their decks online and while I should wait for EDHREC to do this for me, I’m manually checking a bunch of decklists and manually noticing (is that a thing?) the common cards that are showing up. Also, I brewed the deck and came to a lot of conclusions on my own. I don’t have as much data as I will later but I think I have enough to know what we should be ahead of. I’m going to stay away from foils although this would be a reasonable deck to foil out except for all of the stuff that’s in every EDH that’s not reasonable to foil out. Utopia Mycon is under a buck foil and that may lure you into forgetting that a foil Doubling Season is like $90. 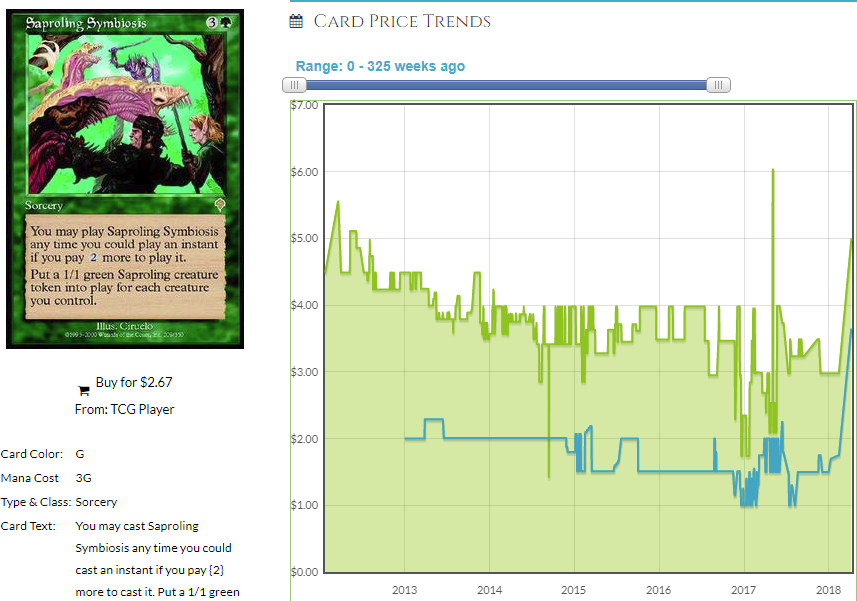 This is a card. I am not sure how good it actually is in Slimefoot decks, but a lot of things are happening. Look at the spike at the edge of the graph. In the last few weeks, buylist and retail price on this card both increased. This is going places. It’s an Invasion rare and that means it’s 18 years old. Invasion has $40 Phyrexian Altar and $25 Captain Sisay. Will this be $40? Nah, but it won’t be gettable at under $3 the way it is right now at CCG House so grabble that free money. If you’re not a Pro Trader and you’re reading this and you’re like “There aren’t 5 copies NM and 2 Japanes NM for all under $3 on CCG House right now” that’s because some Pro Trader just paid for their subscription for like 6 months when these babies peak at $10 and they are ready to sell. I’m not paid extra to push Pro Trader but I do sometimes feel bad knowing that people are going to read this and hear about prices that don’t exist anymore. If they’re still there, that means all of the Pro Traders don’t believe me when I say things and I don’t know what to make of that. If you don’t believe me and you don’t buy them either and they’re still there on Saturday, I’ll buy them and that you can believe.

Again, I don’t know if this card is good, but this card is identified and that means it’s going up in price whether it’s good or not. Ask the price of Patron Wizard. You know, for all of the Wizard synergy. 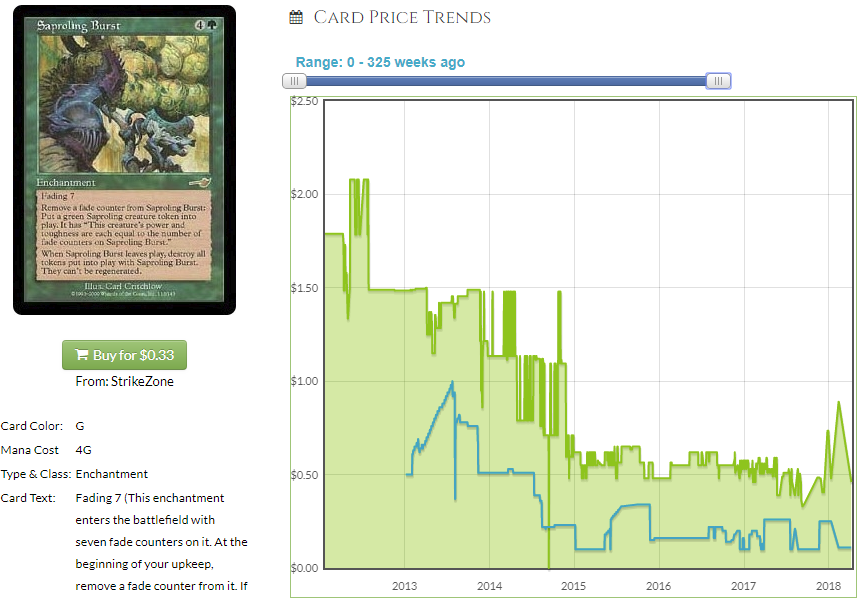 I’m pretty sure you play this, make 7 saprolings which instantly die as you create the 7th one because they all become 0/0 and you get 7 Slimefoot triggers. I’m not a judge and Magic’s comprehensive rules are pretty stupid but if you only get 6 triggers, I’m going to laugh and say “only” in ironic quotes because that is kind of a lot. This is better with Parallel Lives, you know, that card you’re absolutely playing in the deck. It’s great with Death Pact and Dictate of Erebos, you know, those cards you’re absolutely playing in the deck.  This card is a bulk rare but it’s showing signs of life, kinda. There are approximately as many copies of it as there are of Saproling Symbiosis so they have the same theoretical ceiling if you don’t know anything about other factors. However, it being a bulk rare means the price spike will be mitigated by cheap copies being ferreted out that we won’t see with a card that’s already a couple of bucks. This can still quintuple pretty easily and you can buy in very cheaply. Symbiosis is currently in 5 times as many decks as Burst but Burst is uniquely good in Slimefoot and I think there’s upside. This is riskier because I kind of like to be in on a card when people have moved the price and demonstrated they’re aware, but if you want to make real money, you have to be weeks ahead of them and on Burst, you can be. 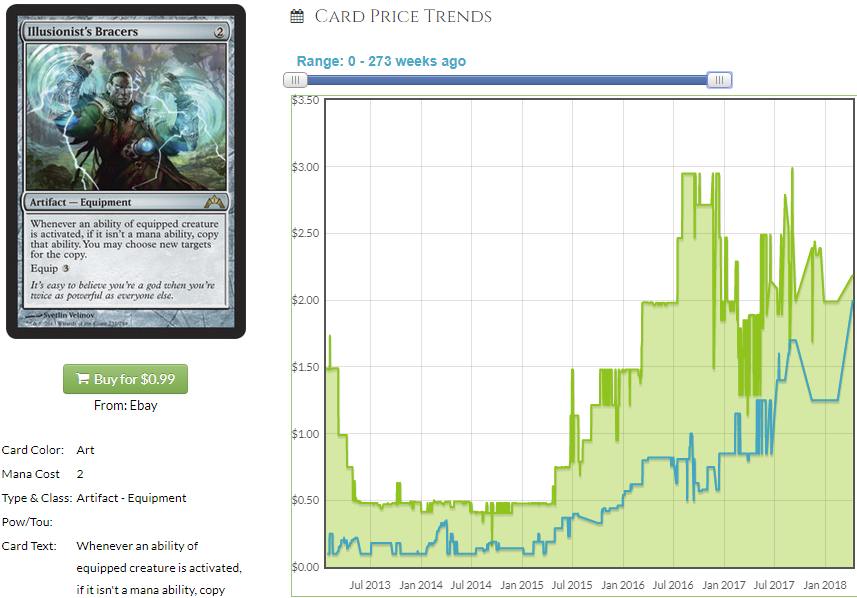 I think Bracers are in a good spot to pop soon, aren’t likely to be reprinted this year and can make us some money. Did you buy $200 worth of these when they were $0.50? Not many people did. It’s OK, there’s time to make money even buying in at $2 and unlike Saproling Burst, every copy of this basically made it into the hands of an EDH player so cheap copies are unlikely sitting in binders because who that plays EDH wouldn’t just buy this loose for $0.50? Look at the dealer confidence in this card, by the way. 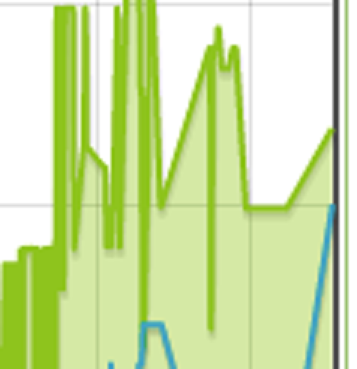 Buylist is about to hit retail. If it crosses, we could be talking about an actual arbitrage opportunity on a card that came out in Gatecrash. That’s pretty recent, don’t you think? This is the 55th-most-played artifact on EDHREC. Just seriously break off $100, throw it at Bracers and I’m really confident you’ll make money. Dealers are paying current retail and it’s their job to do this all day. Let’s take them at their word and pay what they’re paying now and not what they’re selling for in 6 months. 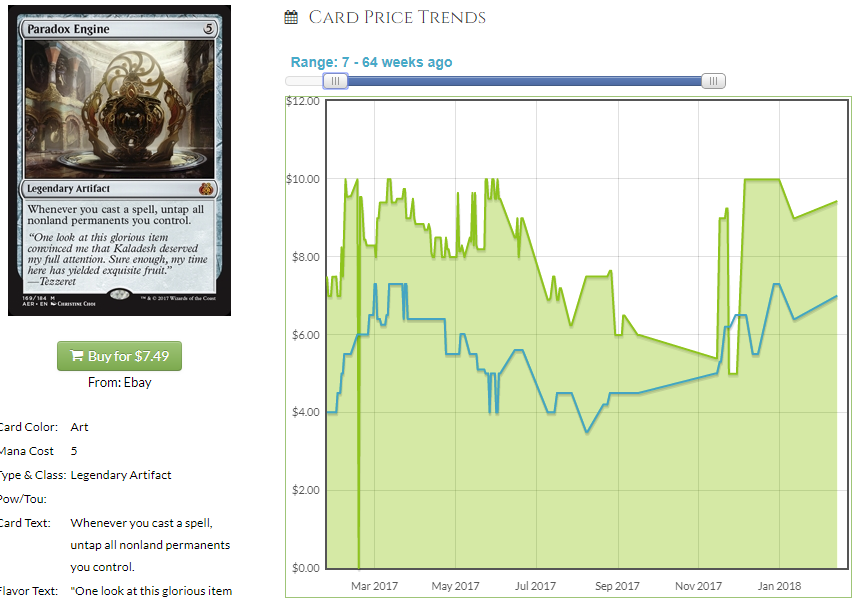 You lose here if one of three things happens in the next 6-12 months.

I don’t think one or two will happen, so why would three? I realize that’s a succinct way to end this section but what more do I need to say? This gives you a lot of mana, it’s an infinite combo with Sprout Swarm a card, and I hate to sound like a broken record, you absolutely play in this deck. 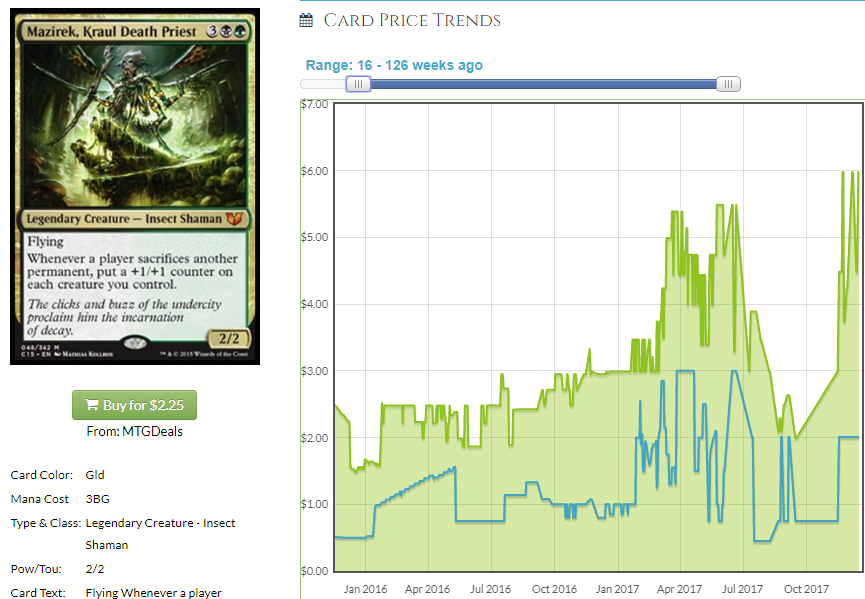 Here are some interesting facts about this card and the deck it’s in. The deck also contains Meren, which is like $9. It has an $8 Thought Vessel, a $4 Eldrazi Monument, a $7 Eternal Witness and nothing else over $2. The deck is trying to go for like $70 on eBay but the cards add up to like $70 if we’re being generous and paying the full $0.36 on Kessig Cagebreakers and not just calling every rare in there a dime like most of them are. There is room for this deck to grow – Wade Into Battle used to be the worst one and now it’s over $100 with cards like Urza’s Incubator, Blade of Selves, Magus of the Wheel (you know, before), Gisela (you know, before), and a $30 Fiery Confluence because yeah, you probably want 4 of them if you want any of them and this is how you have to get them. I’m saying the deck with Mazirek is a good way to start as a basis for your Slimefoot deck since all of the cards that are in it that are expensive go in Slimefoot except maybe Meren and also Toys R Us went out of business in the USA. Rather than sell their product at 50% off, the company that stocks Magic at big box retailers said “no thanks” and cleared the shelves. Those decks are popping up at my local Target, Walmart and a place called Meijer that if you don’t have them, you sort of missing out. Meijer is like if Target had food but also twice as much non-food stuff as Target. I know some Targets have food but imagine Target had the kind of food you could buy and say “I purchased groceries” rather than “I bought a frozen pizza and somehow a 6 pack of wine in cans” because even when a Target says they have food, they don’t have food. They have food the same way that dude on LetGo with the sealed 2017 gift box has $75 worth of cards to sell you because, hey, they’re his step-dad’s cards anyways and he’s just tryin to do tha old man a favor and do you want them or not quit wasten my time.

If those should pop up in the cards section of your Walmart or Target or Piggly Wiggly (whatever your region’s “Meijer” is. I don’t want you to, but you’ll probably write something like “Food Lion represent!” in the comments section and I can’t legally stop you) they won’t be marked at $70 or $100, they’ll be marked at $34.99 and you should buy them. The GB one is the worst one and you should still buy it for $34.99 because did I mention Thought Vessel is $8 right now? In the mean time, it’s not great to bust these for the $70 eBay dude wants for them which means it’s not super profitable to inject Mazireks into the market. Could Mazirek be as much as Meren? Nah. But it can be more than it is now and I’m banking on that because I bought a lot of the stupid Meren decks at Meijer 6 months ago. I should recoup $34.99 but let’s not pretend I’ll recoup $70 – not in a world where Kessig Cagebreakers isn’t $0.36.

Anyway, this article was dense with good financial advice. If you wouldn’t mind, tell your friends that this article was dense with good financial advice (I’m basing this off of the degree of confidence I have in the picks rather than my own assessment of my own abilities as a writer) and they should read this when it becomes free every week. If you couldn’t buy any of these cards, the Pro Traders got them and you can’t beat them and may want to join them. That does it for me this week, readers. Until next time!