EDHREC data for Battlebond isn’t available yet. I don’t have a problem with that and honestly, it might even be a bit premature at this point, anyway. All of the coin flip cards already went nuts because they were obvious to people who don’t play EDH and that kind of stuff is kittycatnip for the uninformed class of speculator. Thinking is hard and checking the Reserved List for cards that haven’t been bought out yet or searching for “flip a coin” in gatherer is easy and sometimes that makes people think they’re geniuses.

The non-obvious stuff is just sitting in store inventories because, like I said, it’s not obvious and that means it could take a minute to go up. I’m going to make a few guesses this week based on no data, just like the rest of the lunatics still sitting on a million copies of Jazal Goldmane. Where do I get off doing that? Well, I sort of have to this week, I’m bored and I’ve done this long enough that I feel fairly confident in my ability to say a few obvious things about a few obvious other things. This article has no theme to it other than “not supported by any EDHREC data” which is not a very good theme. Oh well,  you know what they say; “mo data mo problems” (no one says that) so let’s wing it. If you want to argue with me, there’s a comment section below. Let’s do this!

This is going to be a few thoughts that I have thought and I will try to make convincing cases for these cards mattering. 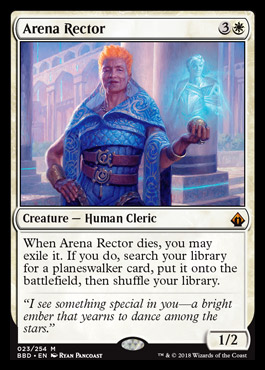 I stopped incorrectly guessing the prices of cards like Recruiter of the Guard and Arena Rector when I stopped making myself guess. I don’t care what Arena Rector ends up costing. I think the value of the set has to go somewhere and short term, a lot of the reprinted cards will tank a lot but the reprinted cards are almost all EDH staples so I bet they go up before it even matters. However, there will be a few weeks where cards like this need to pull their weight so this could maintain some of its value. I don’t care either way. If you want them, buy them at peak supply as long as the price graph has rebounded a bit. Don’t grab a falling knife, folks. But this card’s price bores me so let’s talk about the cards that this will affect. 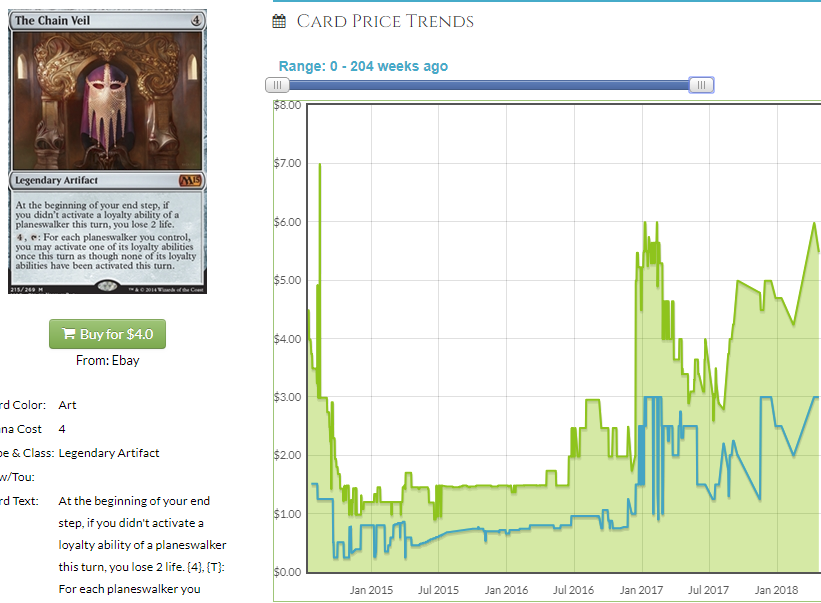 There seems to be no shortage of opportunities to make money on this card. I like its a lot at $0.75 but I kind of don’t hate it right now. Arena Rector means more interest in Planeswalkers in general and Atraxa will be in Commander Anthology shortly which means you can pay like $120 for 4 decks, one of which is Atraxa versus paying $100 for Atraxa right now. This means you get 3 decks for $20 and people are about it. I expect cards like the Chain Veil that get jammed in Superfriends decks are extra buoyant in the future with those two things converging. 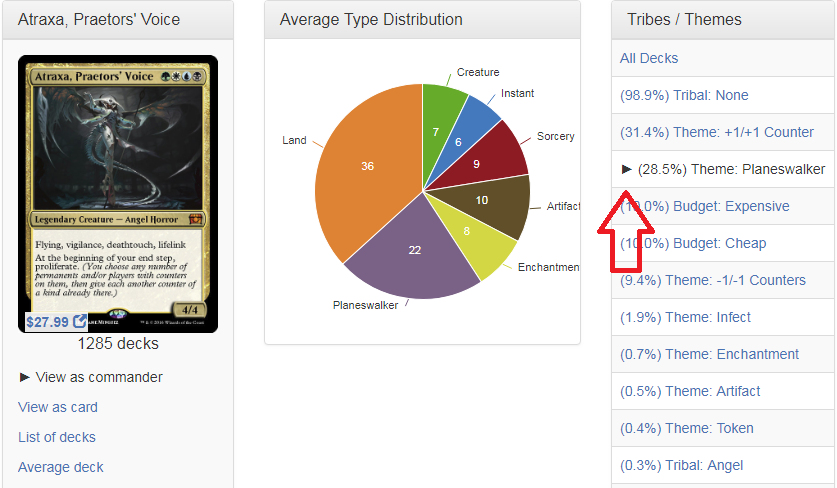 See the thing the arrow is pointing at? on EDHREC’s Atraxa page, you can click on themes and find the cards that are only in Atraxa Superfriends builds. That will let you filter through more relevant cards in a shorter time by eliminating infect and other cards and letting you see Superfriends staples. That will help you figure out what has upside with Arena Rector becoming a thing.

There are some interesting cards on that page and they don’t warrant a ton of explanation. 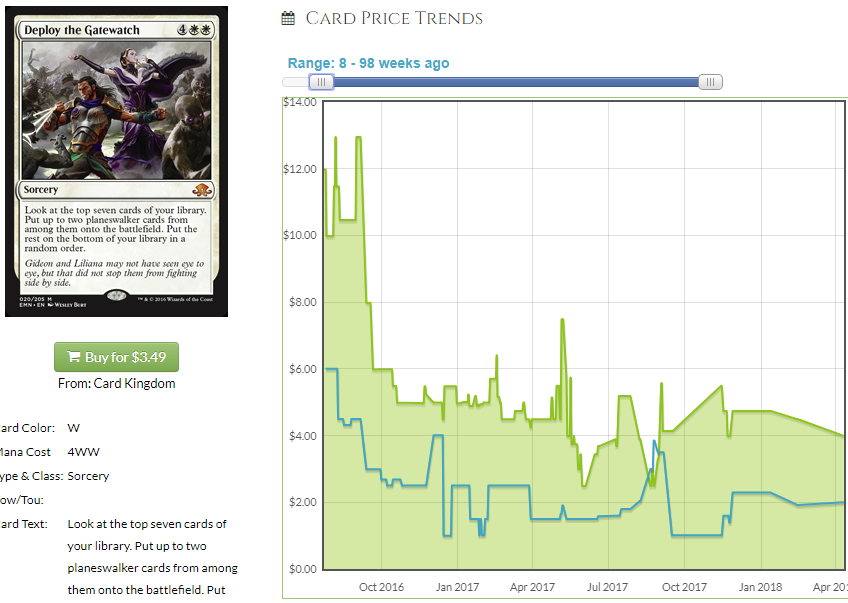 This is near a historic low after a recent brush with arbitrage. There are a lot of these but they’re also foil mythics and that means supply will eventually run out and drive the price up. 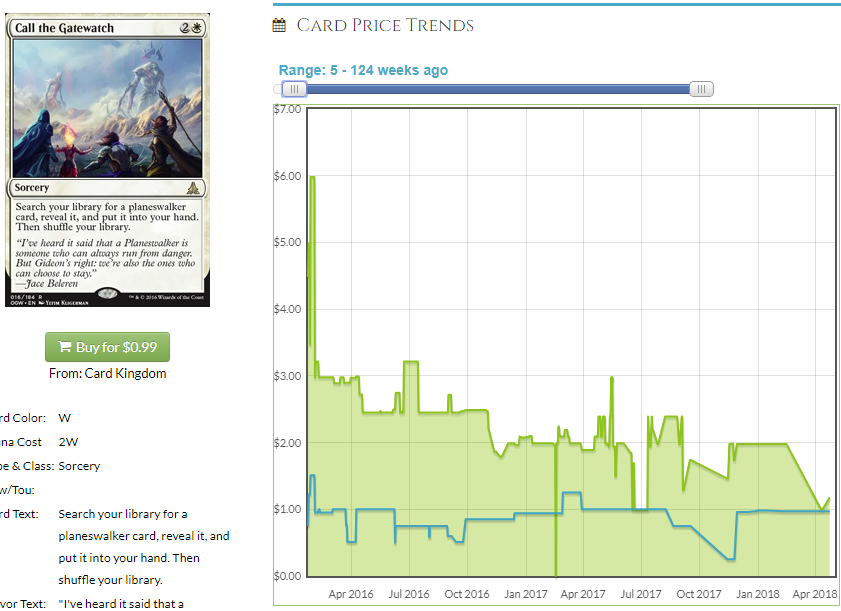 There are more of these but we’re in week 4 of arbitrage watch and I think it’s the dealers who have the right of it, here, not the low retail price. I can’t think of many places I’d rather park a few bucks at $1 per. 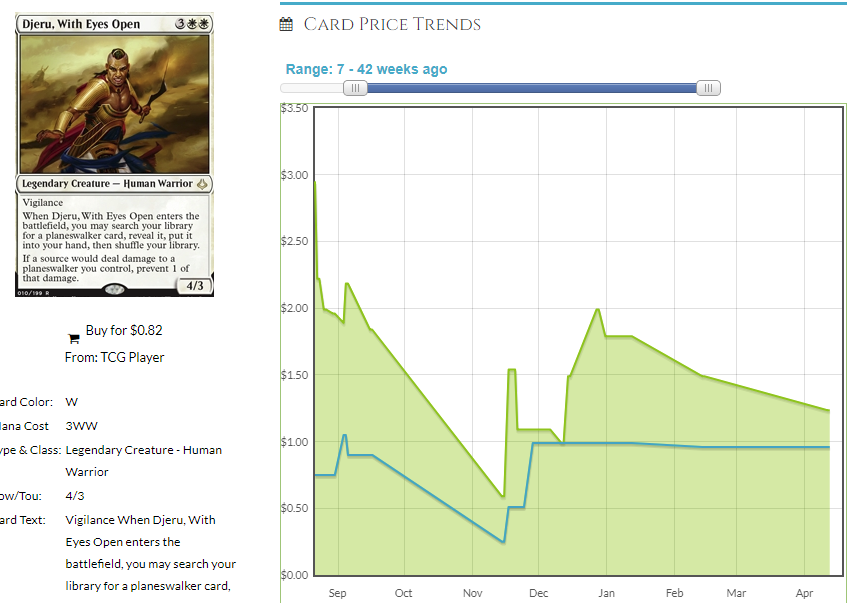 You’re seeing the inherent weakness in the ability of fringe EDH to move prices of non-mythic cards under 2 years old. That said, how can this get cheaper? It’s good in White Planeswalker decks and if you’re playing Arena Rector, there is a 100% chance you at least have access to Djeru. 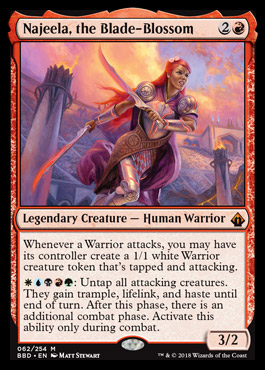 I will do a full article on this because I expect this to move a lot of dials, but the most popular way this is currently being built is a combo build and the combo pieces are already known to me because the people who are inclined to go super spiky with a commander like this are equally inclined to get their thoughts published on the internet first.  I think the combo pieces are worth a look. 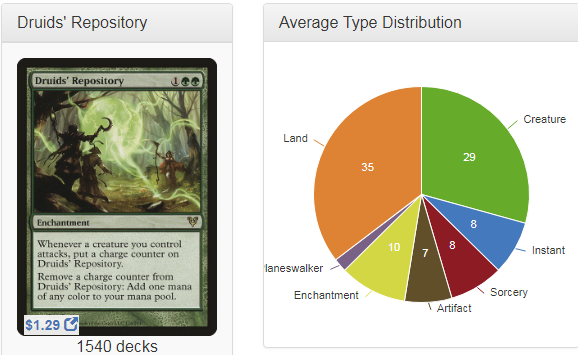 At 1,540 decks currently, this card isn’t exactly unknown. It’s also over half a decade old and supply of Innistrad isn’t exactly getting replenished with boxes being so expensive. This card is instrumental to the Najeela combo and if you’re buying in at like $1, you basically can’t lose. The combo needs this card in a few of its iterations and all of the ones that are fewer than 4 cards. I like this as a pick-up a lot. 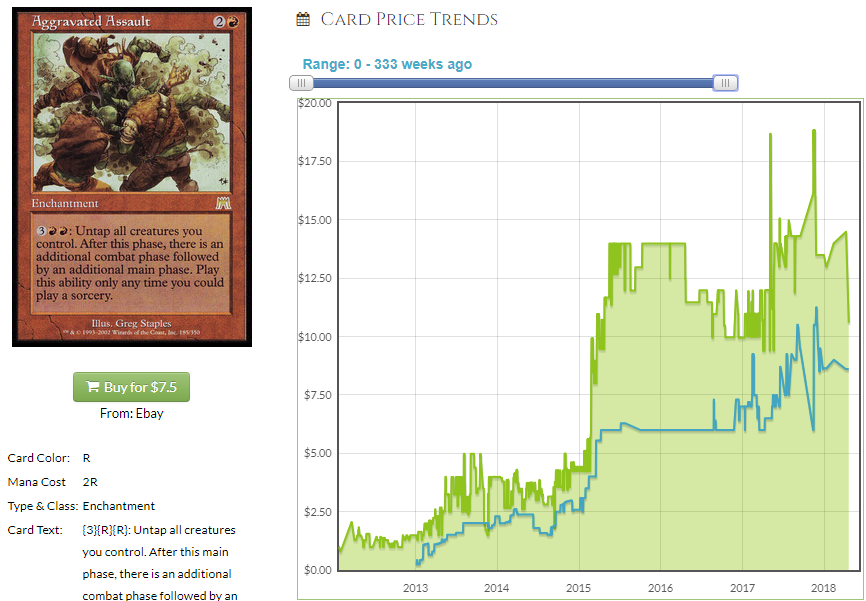 This back on an upswing after the Explorers of Ixalan printing, which isn’t that surprising. Two innovative ways to try an curb the price of this monster card, the Masterpiece and the Explorers printing, gave decent opportunity to buy low on these. Considering this is a way to do the Najeela combo without having WUBRG I think this is pretty important and anytime a “combat matters” commander comes out, this goes up. This is an EDH semi-staple basically from now on. Staple is a word that a lot of people throw around, but semi-staple should catch on because a card that’s in a lot of copies of a few builds isn’t a format staple but isn’t chopped liver, either. Auto-includes deserve a classification because their demand is less linear a curve and more a series of leaps and plateaus and that’s good to know. 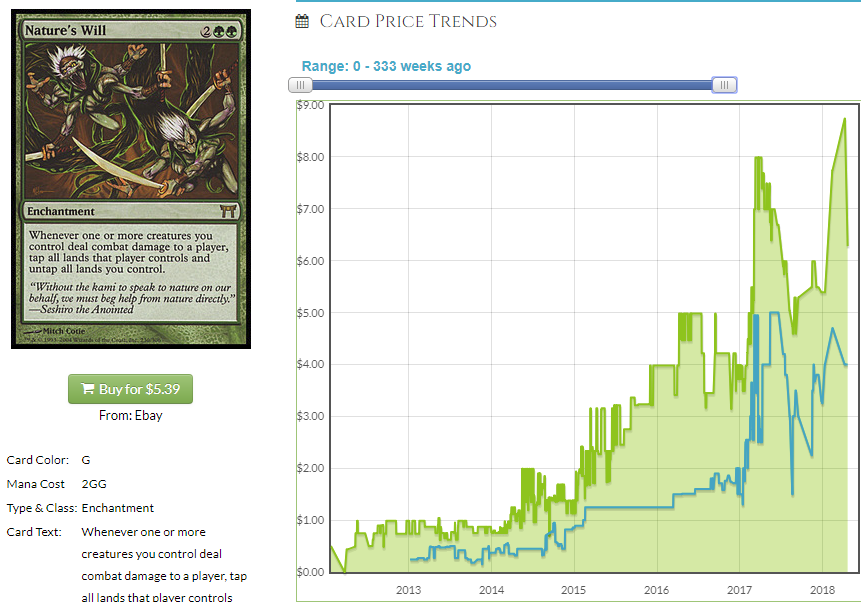 These were $2 the first time I mentioned them in an MTGPrice article, so I hope you used those gains to buy a Pro Trader subscription for life. If not, that’s cool, just calling out my hits and ignoring my misses like everyone else.

Anyway, this card is usually worse than Bear Umbra because you have to connect with something to get the benefit but considering you’re farting out a ton of  tokens, you’ll be connecting for sure. Both Bear Umbra and Nature’s Will are like $10 now which makes me wary of a reprint but in the short term, they’re not exactly going down and Najeela has created more demand. 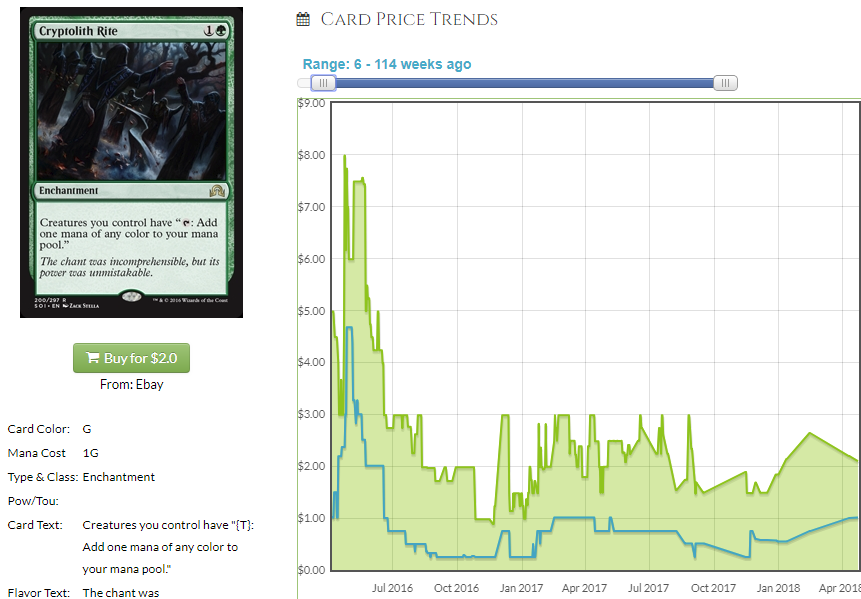 I don’t want to shoot my wad  and not have enough cards to cover when I do a Najeela article (if I even do one at this point) but Najeela has a lot going for it just vis-a-vis the combo wins I have seen online and this card features in a lot of them. Its days in Standard are over leaving us to speculate about how much EDH can prop it up, and considering how much Earthcraft costs these days, I think we’re pretty safe calling this at like $2. This is like Druids’ Repository in that it’s an easy pick and if you don’t buy these, some non-Pro Trader will on Thursday. 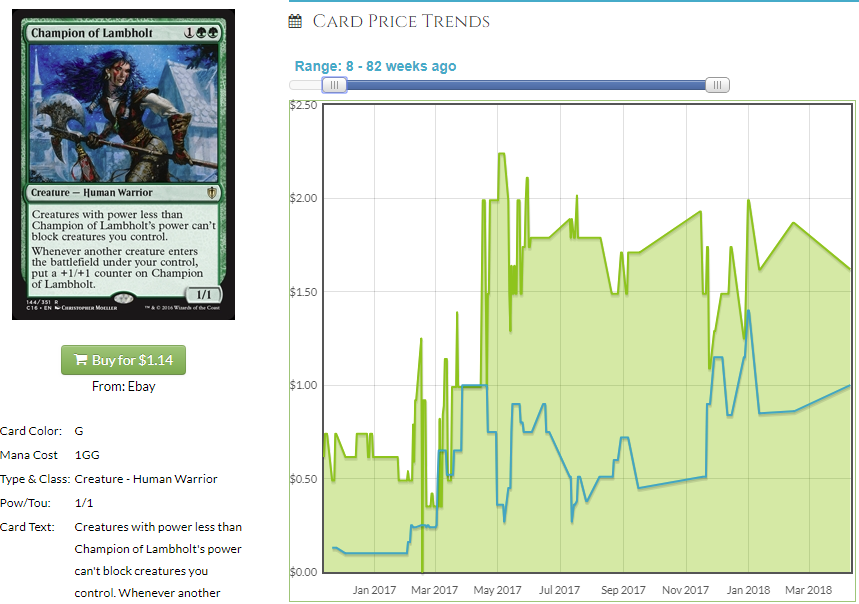 Not going to list too many Warriors here, but this looks pretty damn good to me.

This is what I could come up with off the top of my head based on what people have already built or said they were building. Normally my articles have more words but they don’t have fewer cards discussed and since a picture is worth 1,000 words, I’m way, way over my word count anyway. There’s a lot of digest here and if you felt this was too brief, here’s a homework assignment – take the 3 minutes you would have spent reading 3 more paragraphs and mess around on EDHREC. Get used to the filters like the one I pointed out that can be used to filter just the Superfriends cards and look at some of those cards. Which White Planeswalkers are always likely to be in decks with Arena Rector? Here’s a hint – you can use EDHREC to figure out which Planeswalkers get played the most overall and also use the Atraxa page to find the Superfriends ones. Maybe go to a Planeswalker card like The Chain Veil’s page to see which White ‘walkers (heh) correlate the most with that card. I’m teaching you to fish as much as I’m feeding you hand-cut sushi every week. Next week I’ll either have some EDHREC data to look at or I’ll be looking at speculating on stuff like Pir and Toothy and I hope to not have to do that. Until next time!

One thought on “Unlocked Pro Trader: No Data No Problems”