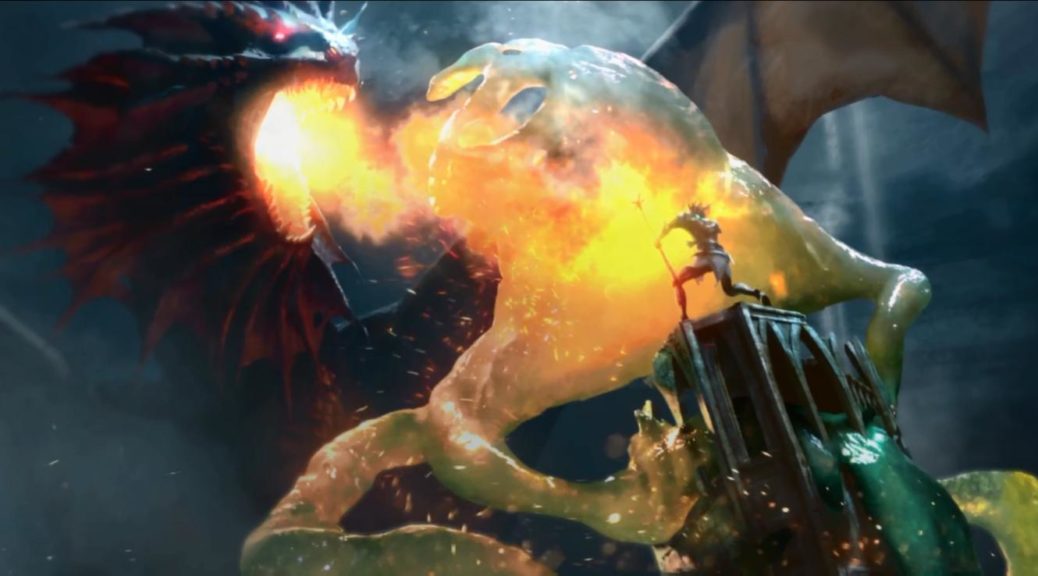 I know in this series we like to use data in the weeks that it begins to trickle in to try and predict the future. It’s been working out pretty well for us and it makes us look particularly prescient when someone says “Did you realize Squandered Resources was  $25?” and you show them a big stack of them, or at least the Legacy duals you bought with the profits of your 10,000% gains. It doesn’t always work out like that, obviously. Sometimes this is way harder and the tea leaves are way tougher to read. Sometimes, though, stuff is way easier because sometimes we get a new commander for an entire deck archetype that already exists.

Why Would a Deck People Already Have Built Help Us?

It’s worth addressing this point because if I don’t, it threatens to fundamentally undermine the entire thesis of this piece (which, I guess, is “lol, look how easy it’s going to be to figure out all these cards that are going to pop by looking at what popped the last time this deck was a thing”). Are people going to run out and buy a bunch of cards when the thrust of the deck isn’t really all that new? Is someone who bought the cards for the deck going to buy new copies if they like this new commander better, or will they just change their old deck up a few cards, jam the new commander, put the old one in the 99 and call it a day?

I think there are a few things going on here. Obviously, yes, if someone is going to dust off an old deck with a new commander, they already have most of what they need and they aren’t likely to need to buy all new copies. The more similar the deck is (and we’re discussing very similar stuff today) the less likely it is that they need anything at all but that’s not that bad a thing for us, actually. If they sold the cards, they need to buy them again. If they didn’t sell the cards, they took them out of circulation.

When Nekusar decks first hit, they launched a ton of cards from the $0.50 range to the $5-$10 range by virtue of being the first deck to really incorporate them. I made a ton of money off of cards like Teferi’s Puzzle Box due to Nekusar decks and other cards like Forced Fruition, Windfall and Tolarian Winds became interesting. You could find $1 copies of Forced Fruition in dollar boxes, shops that didn’t update their prices often, trade binders, shoe boxes – what I call “the woodwork.” Copies aren’t coming out of the woodwork anymore meaning anyone who comes along and wants to build the deck is fighting for copies with the people who already have them. So while at first, we may think that the decks existing already means there isn’t as much demand for the cards as before, I think we’ll see more second spikes. The first spikes ferreted the copies out of the woodwork and now everyone who wants a Puzzle Box for a new deck can’t get one from a dollar bin – their only recourse is to pay retail. When everyone has to pay retail and buy from a small number of sources with finite copies rather than myriad sources all over, price go up quickly. 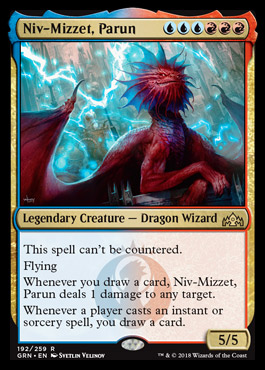 Niv-Mizzet looks pretty similar to older Niv Mizzets but he also seems to be the most popular. He’s a bit of a combination of the Old Niv-Mizzet Curiosity decks and Nekusar. The spellslinger clause is interesting because it helps mete out even more damage when you do what I assume you want to do, which is cast wheels and recycle your deck. Here’s what I am looking at based on the following EDHREC pages. 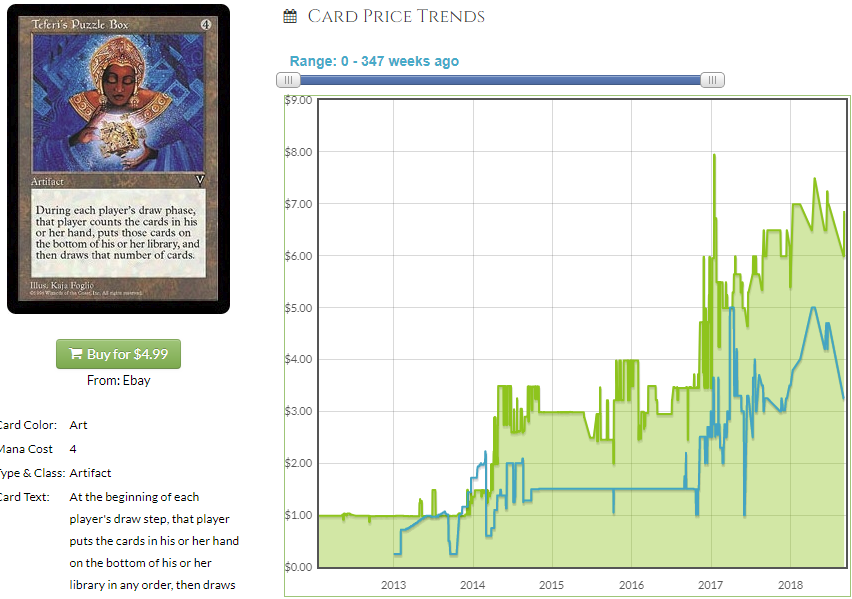 Puzzle Box is the queen of all kittycats here and while the overall price trend is up and up, I have had a few opportunities to buy cheaper copies of these when the demand seemed to have died down a bit. Nekusar into Leovold (briefly) into The Locust God into the new Niv-Mizzet, though, has given us a lot of chances to make money here and I think this new Niv-Mizzet is another chance. 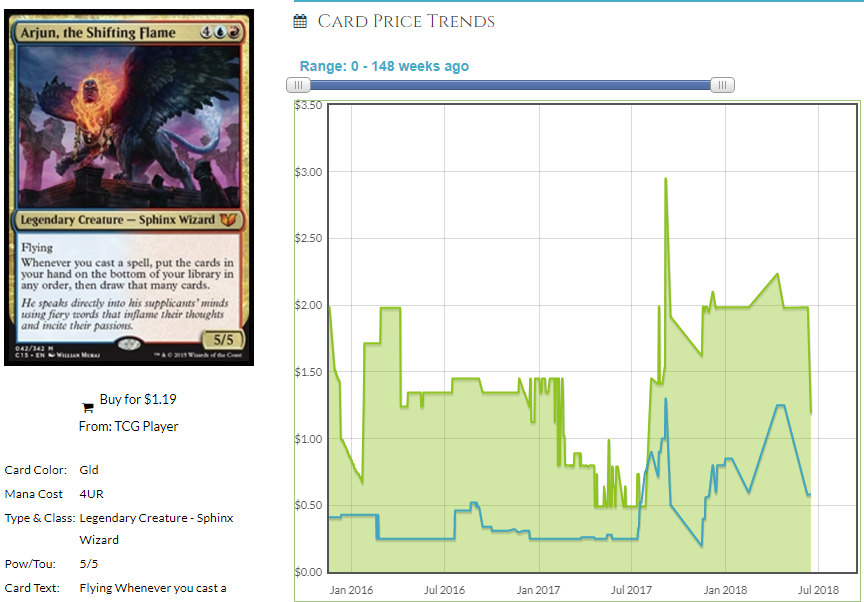 Arjun seems like a low-risk buy-in with some decent upside. Mindmoil effects in general are good right now because rather than deck yourself you’re just shuffling your cards back in so you can tutor for them (except not Mystical or Personal, I guess) or just draw into them again rather than throw them in the bin so you can keep the pain going longer. Arjun is good as the commander of a deck and also as an inclusion and Psychic Corrosion may be a good inclusion for it but with Niv-Mizzet, we want to just keep pinging them a ton. There are hundreds of $1.50 copies on TCG Player to slog through but once that happens, I think this could get there and at least getting these when you’re $1 off in a trade and socking a few away for when we’re another year removed from the Mizzix deck’s printing and we hit a tipping point on Arjun, I think you won’t be disappointed. It may take a few more Niv-Mizzets to push this but I am patient. 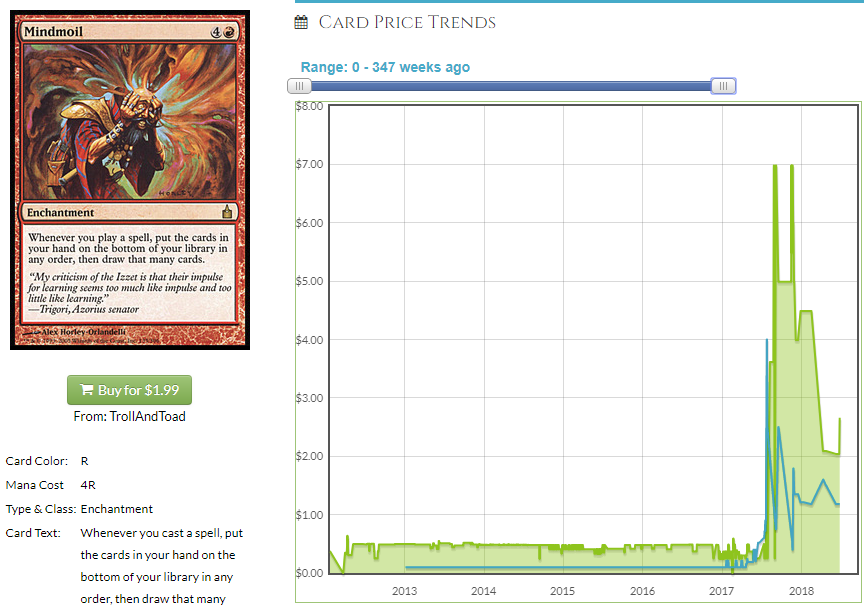 Moileyboi on the other hand has demonstrated a willingness to flirt with $7 on the basis of other factors and this second spike which could be incoming is likely to stick. This is a Ravnica rare and while its inclusion in 1984 decks hardly makes it a staple, it’s in over half of the registered Arjun decks and it’s a good bet that if either card catches on they both will. This is going to dome people for significant damage with a Niv-Mizzet deck and also find you the Curiosity or whatever you need to win the game on the spot. This deck isn’t fun but that hasn’t stopped it, ever. 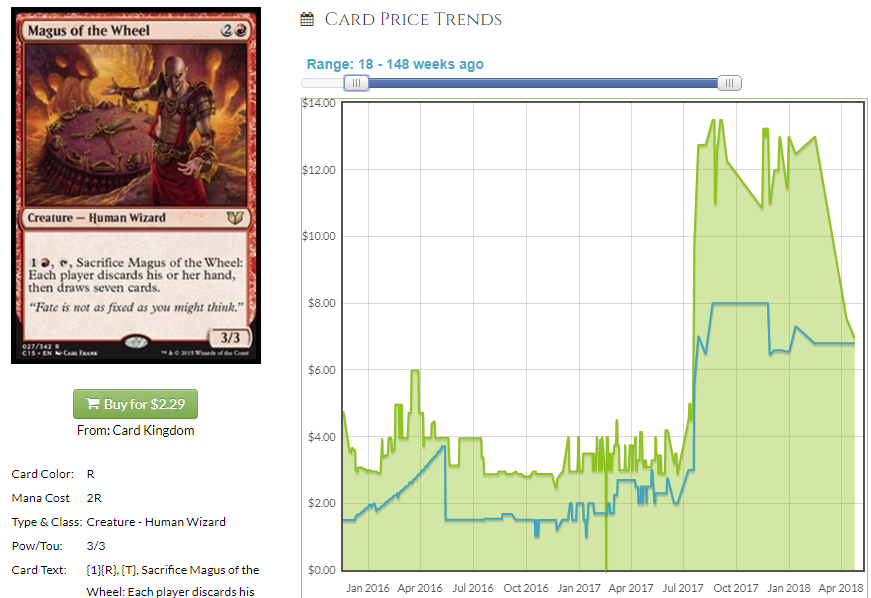 Magus really took a bath when a Masters 25 printing cut it down from $12 to $2, which really nerfed all the RW precons I bought because I could flip them for basically double. Magus has demonstrated it can be $12 with the huge supply from a Commander deck and while there were a lot more copies injected from Masters 25, that’s still a $10 booster pack set that isn’t being opened anymore and Magus likely claws its way back up. It’s a good idea to buy Masters set stuff at its floor anyway so I think this would make sense even if they hadn’t printed another juicy commander for it. 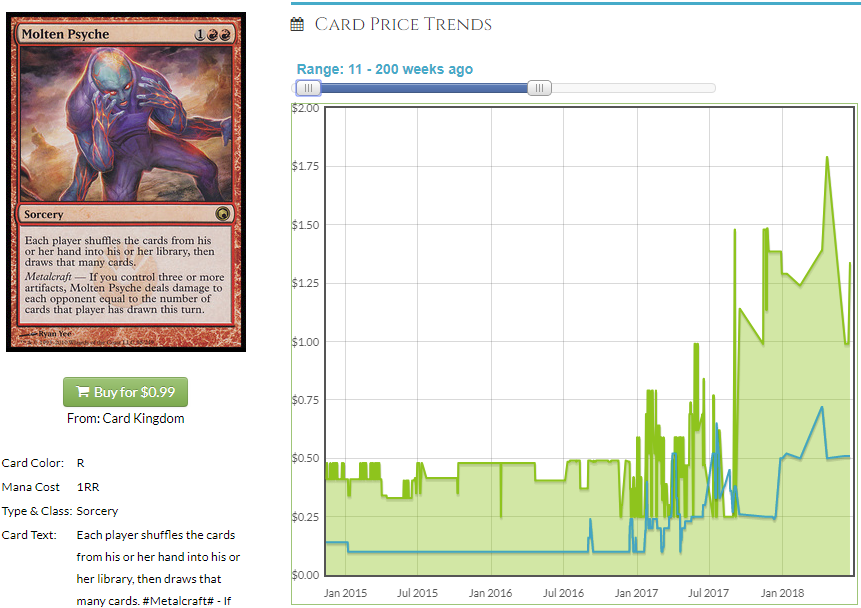 What is taking meltyboi so long to pop? It may not be super apparent from the graph, but do you see that little region of daylight below the blue line in the middle there? That’s an arbitrage opportunity – for a brief period of time, buylist was actually above retail. The price went up after so the dealers were clearly right. This is a rare I still get for a dime when I buy bulk rares from people, which is a surprise. I think a second spike on this goes to $5 but I don’t know if Niv-Mizzet does it. Still, this is hard to reprint given its metalcraft ability and while it feels like the 8th, uncecessary wheel in the deck, it’s actually pretty savage if you get the metalcraft boost and you plan to wheel some more. You even get to draw another card when you play this off of Niv-Mizzet.

In conclusion, I think while Niv-Mizzet is sort of boring like the other one where you just slapped a Curiosity on him and won , I still expect there to be building around him and if there is, a lot of stuff that is in low supply goes to no supply. I think there are a bunch of kittycats that you buy before people get wise and sell on the basis of hype and if a sexier-looking commander gets spoiled next week, you best believe I’ll talk about it. Until then, keep buying cards, keep asking me questions and see if you can help me buy all of the Mindmoils on TCG Player. That’s a big domino and if it falls, so do a lot of other sites. I think if you scrutinize the pages of the commanders I linked, you may find a few more cards that pair nicely with the new Niv-Mizzet. If not, I’ll be back next week, probably with an article called “Everything Old is New Again Again.” Until next time!