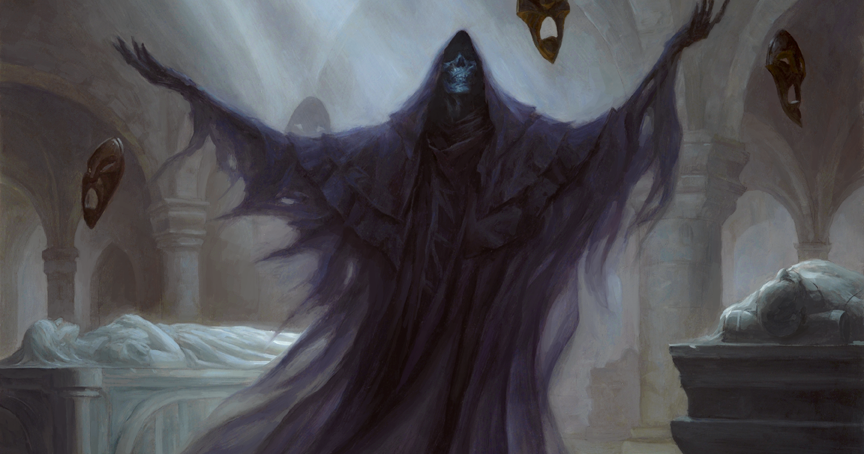 A while back I did an article about cards from Iconic Masters that get a lot of use in EDH and which I expected to recover in price. I think it’s worth holding my own feet to the fire and taking a look at my calls to see if I am any good at this or whether there are some longer-term specs in the list of cards I called (For the record, a spec that doesn’t pan out right away isn’t a miss, it’s a “longer term spec” because you figure everything goes up eventually and why admit you’re wrong when you can just say you’re right but, you know, not yet?). The second part of this article will be attempting to do the same thing for Guilds of Ravnica cards I like as long-term holds as we approach peak supply and therefore the lowest prices.

I am going to show the old graph and the new graph of these cards and we’ll see if the recovery we predicted is starting yet. 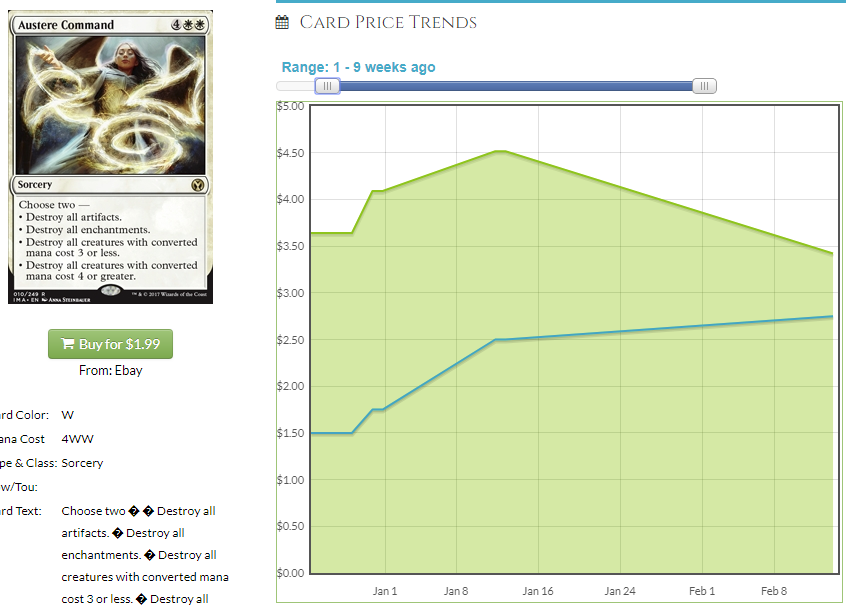 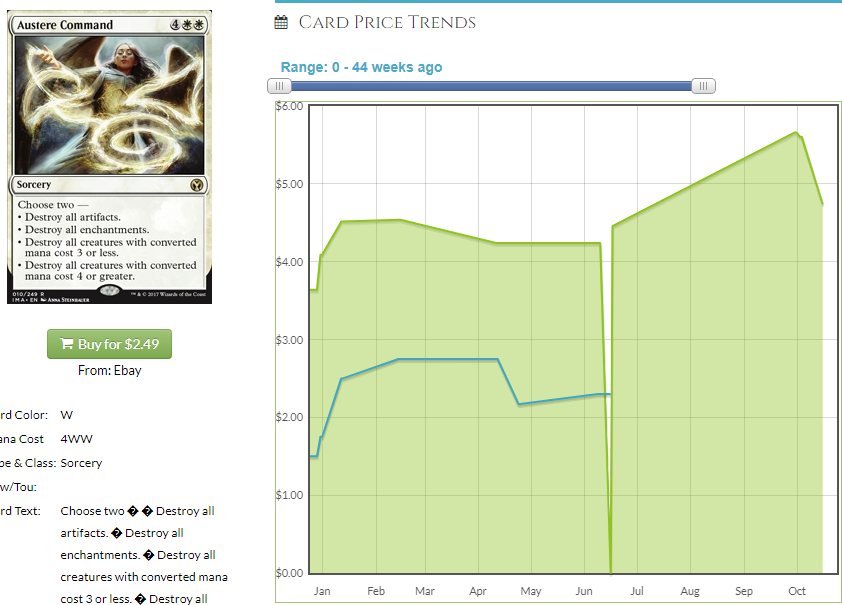 Since February, Austere Command has grown about 25% in price. Buylist data from TCG Player pegs the buylist price at about $2 as of today which is about flat with the graph above. Dealer confidence isn’t as high now as it was then but this card is growing and while eBay is pegged at $2.50 versus $1.99 last time, TCG Market price is $4.50 and Card Kingdom has the card at $6.50. Notable also is the fact that TCG Market price is $7 for foils, which is a very low multiplier. Historically, the multiplier is much higher for Austere Command, the 11th-most-played White card per EDHREC. At 18,000 decks, it’s going to soak up a lot of Iconic Masters supply and I would call this one a win. If you bought in in February, you’re seeing gains already. 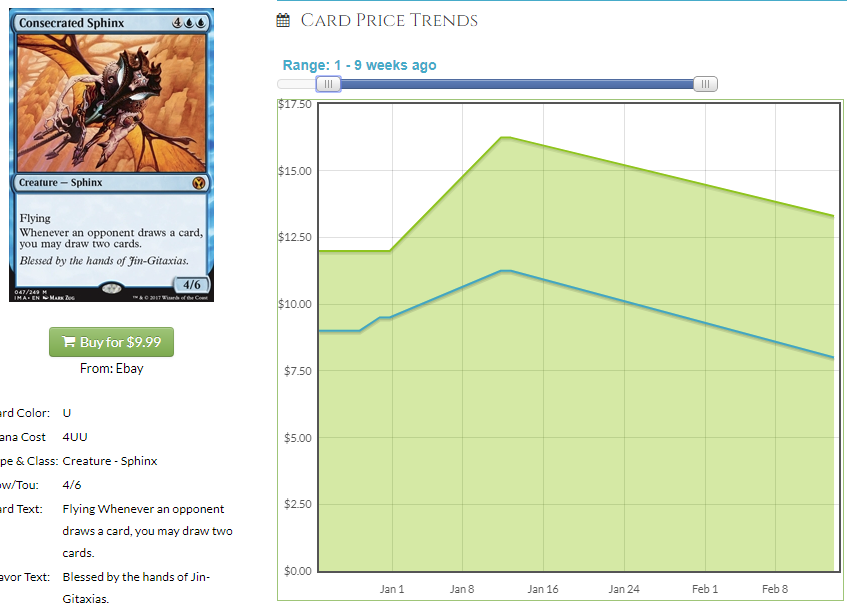 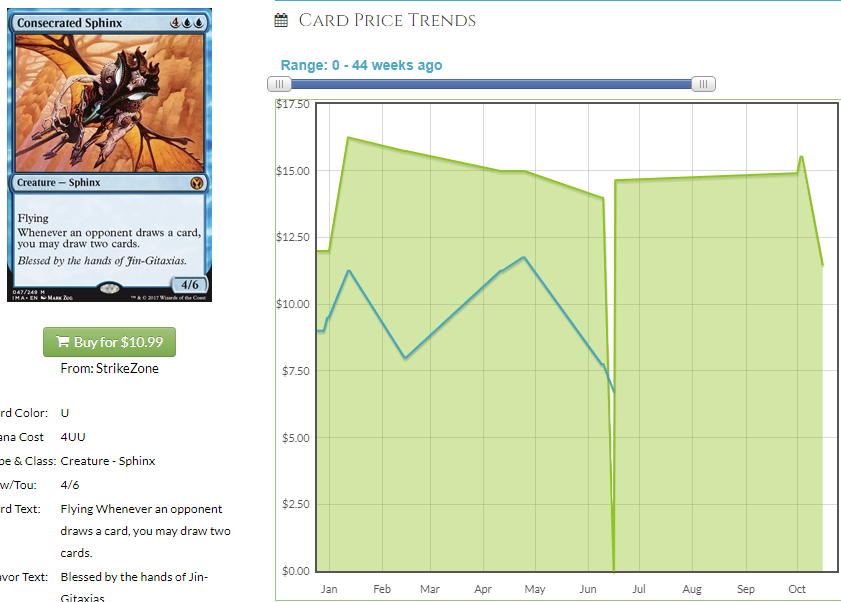 This appears to have gone up by 10% on eBay over the last 8 months but trying to reconcile Strike Zone prices with eBay prices is a bit of a mess. What I can say is that in February, this was $10 on eBay and today, the TCG Player buylist price is $8.50. Strike Zone is also sold out at $10.99 – it has Mirrodin Besieged copies for $11.99 and foils for $20, which I think is attractive although this did come down after some speculation-based hype surrounding the masterpiece a while back. I think with Card Kingdom currently charging $18 on Sphinx, calling this a $20 card by net February was a tad idealistic but you absolutely made money if you bought in February. 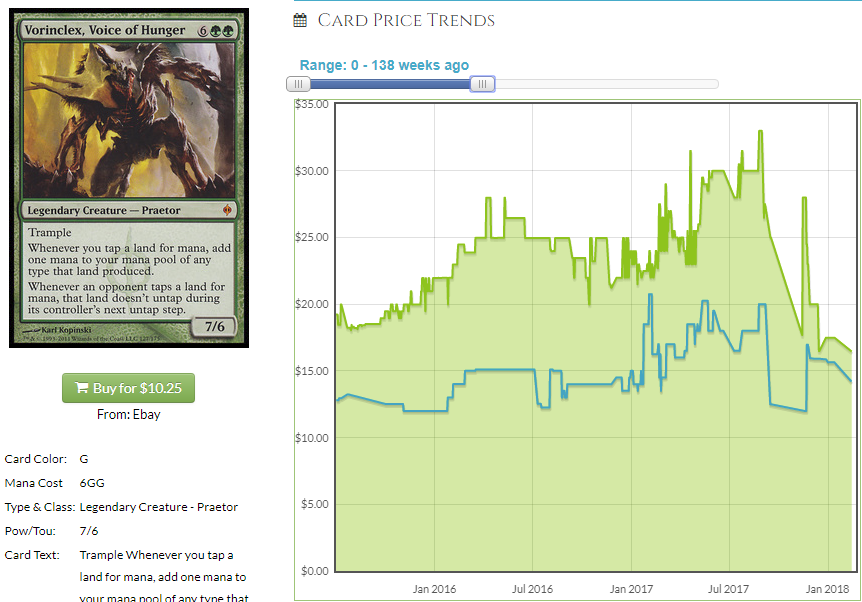 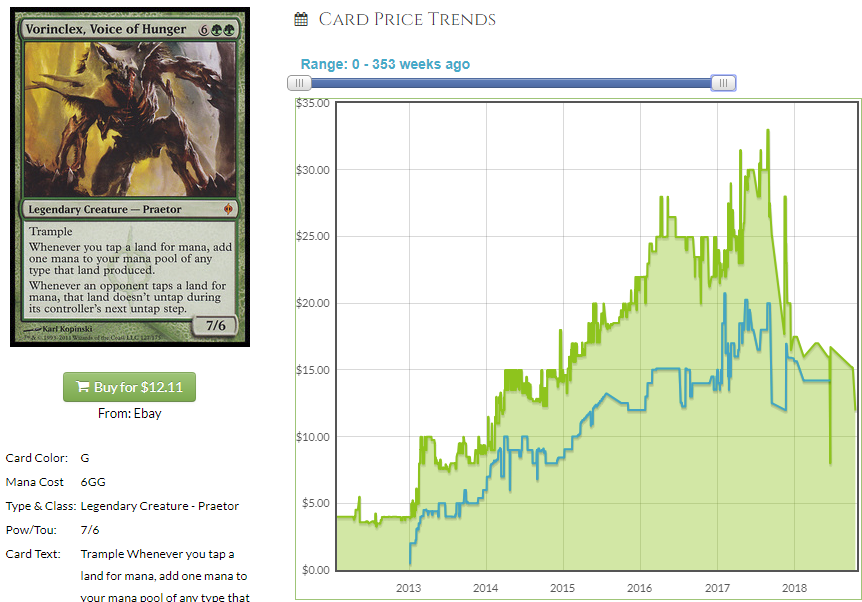 Vorinclex is DOWN since February. That’s not entirely not to be expected. This was less a pure spec and more a hypothetical test case.

As a reminder, here is what I said in that article:

It’s not the strongest endorsement of a spec and I was equivocating quite a bit. I was testing the hypothesis that people who never had access to Vorniclex because it was too expensive will be enfranchised now because cheaper copies mean that they can suddenly put it in decks they couldn’t afford to before so even though there was more supply, the new supply would help facilitate new demand. It’s a logical hypothesis. I just forgot one thing.

If they discounted Vorinclex as a potential card because they couldn’t afford it before, they’re not going to track its price. They likely have no idea it’s cheaper now and since they got along without it fine before, they can get along fine without it now, even with it being half price. I still think this can recover because it has a non-zero amount of demand and I do still think it being cheap can help some people realize their dream of being the world’s biggest douche and locking down everyone’s mana, but while I didn’t expect much growth by this point, I didn’t expect the card to still be falling in price. I don’t think this will go down much more but that doesn’t bode well for its recovery. It seems my hypothesis about uncovered demand is predicated on the assumption that EDH players will notice when a card they couldn’t afford suddenly becomes affordable and that doesn’t seem to be the case, even though the prices are listed on sites like EDHREC right on the card. 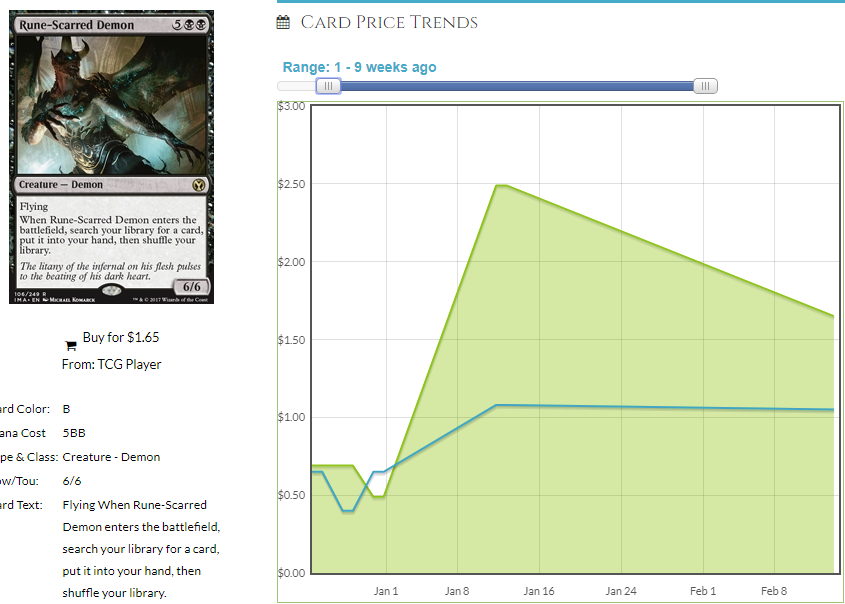 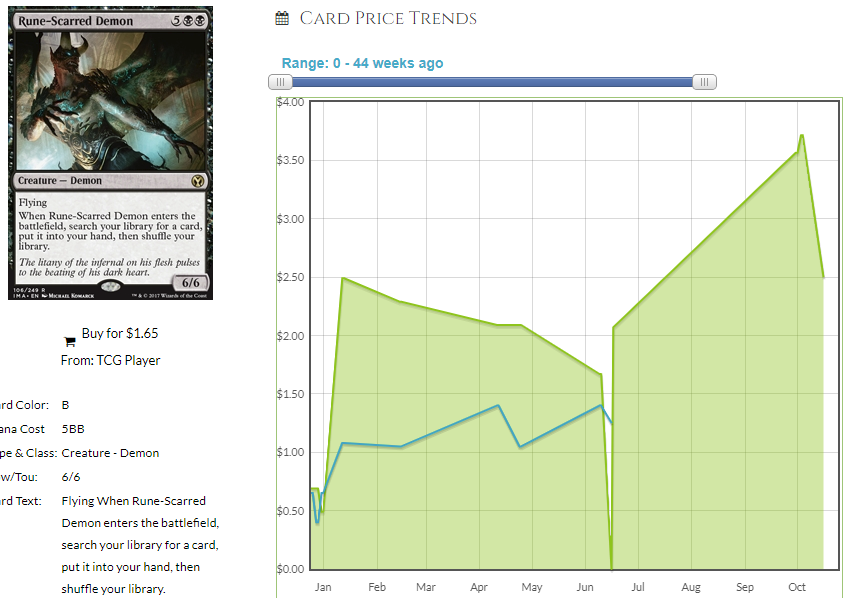 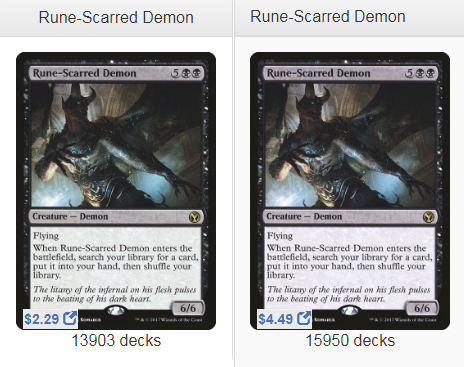 This is up nearly 100% in the last 8 months and the demand has expanded significantly as well! Good deal.

I’m not surprised as much as I am delighted. It seems like $2 rares are recovering better than $25 mythics and that sort of makes sense but also in a way it’s a surprise since there are more rares than mythics by quite a margin. Demon’s growth is very healthy. I’m not sure how much of that is attributable to the Shadowborn Apostle deck on Game Knights but whatever the case, demand is up 15%, price is up 100% and life is good. The best part is, February turned out not to have even been the floor so the card’s price recovered even more than 100% of its value. We’re learning about Masters sets just in time for the next one. 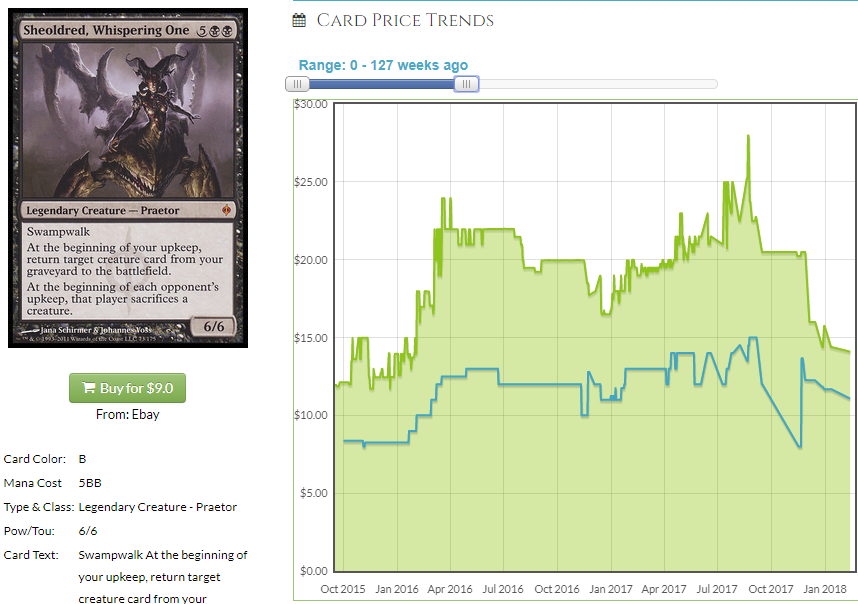 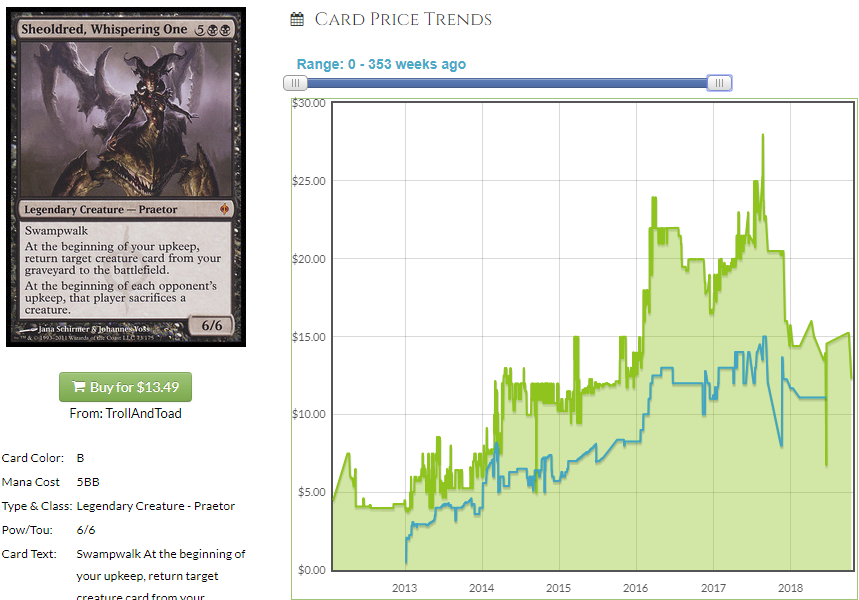 The Praetors aren’t recovering as well as I might have hoped. If we’re going by Ebay prices then and now, this was $9 and now it’s $14.75. Card Kingdom has it at $17. It’s recovering OK but the graph bearly bears that out, potentially owing to confounding data from sites that sold out but still got scraped by our algorithm that determines the Fair Trade price. By all accounts, this price is up as much as 30% and that should be the case given its inclusion in 19,000 decks on EDHREC. I think this was a good call and people made some money and will probably make some more.

Here’s what was reprinted in Guilds of Ravnica and how much it’s used in EDH.

I bet you wouldn’t have guessed that Prey Upon was getting played twice as much as Narcomoeba, but it’s true.

There aren’t too many non-foil plays to be made here, unfortunately, but we can talk about the elephant in the room- Chromatic Lantern. 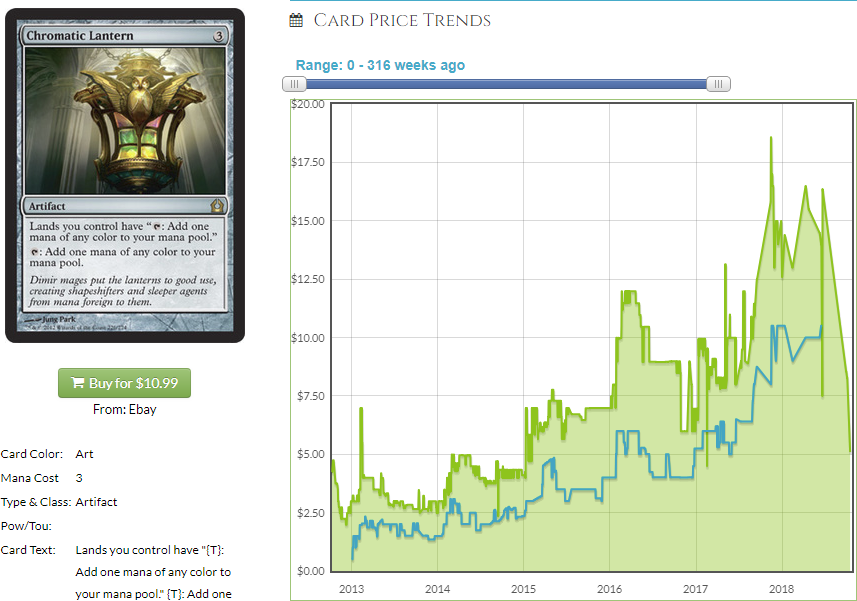 We’re not to peak supply yet, but a Guilds Lantern is currently $3.69 Market Price on TCG Player. Other sites have them for around $5. What are the odds Lantern can be left alone long enough to hit the $8 or $9 mark it needs to hit for you to make any money? 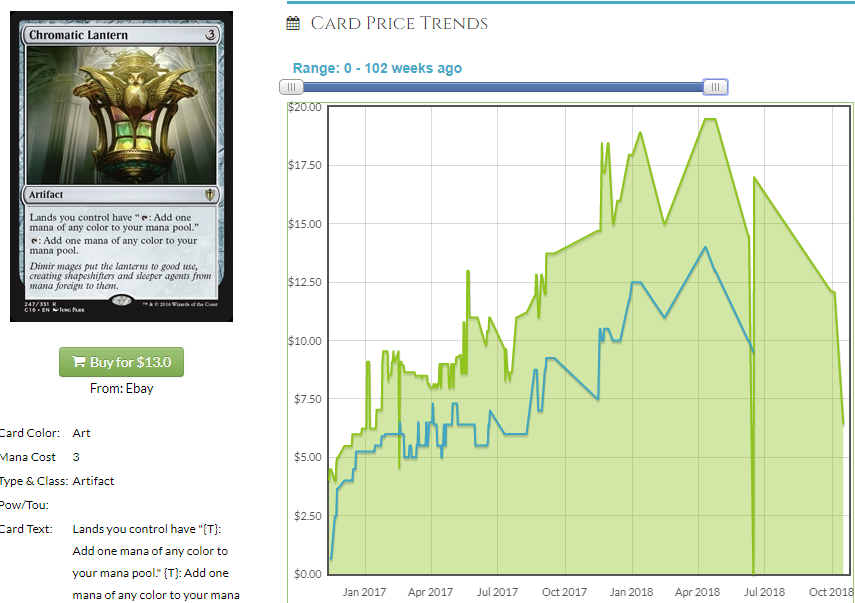 Here’s the graph for Commander 2016 copies. Will Guilds of Ravnica give us more copies than did Commander 2016? Indubitably. The market is pretty well saturated. But Lantern is a card that is guaranteed to go back up given how ubiquitous it in EDH. You may want to set a target price and get out before a Commander set gets announced and the copies are harder to out as people wait to see if it’s getting reprinted, but a 2 year hold is very good on this card historically. We’ll see the growth rate less than it was for the Commander 2016 copies, certainly, but we’ll see growth. I think when the price bottoms out when we’re at peak supply, you can safely move in on these, and I target every one of these I see in a trade binder as a reflex.

There aren’t as many picks from reprinted Guilds cards as I might have expected so I’ll give you a couple more cards I’m watching. 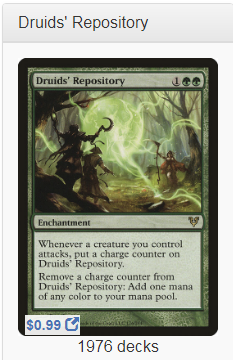 With Izoni, Emmara and Trostani all in Guilds of Ravnica and all with access to this card, only Najeela decks playing this lately feels wrong. This card is actually absurd and it’s criminally underplayed. I don’t know what it will take to snap people out of their malaise, but when they notice this card, this is $5 easily. Rares from this same set that get used in EDH have been over $10 and are above this card’s current $1 after reprintings. Their demand is higher but I think once people notice this card they’ll buy in. Then again, I thought EDH players would buy Vorinclex half off and they didn’t.

It’s gone, rotated out of Standard and likely at its price floor. Currently $5.87 market price and $11 for prerelease foils, this bad boy is a cross-format allstar with significant EDH demand and with use in decks like Niv-Mizzet and other Izzet decks that got a ton of new toys, I can safely call this a $10 card waiting to happen. It’s bannably good in Brawl which is a format that isn’t as dead as everyone thinks and is likely getting some Wizards support, potentially with printings involved and if this is ever ubanned (ehhh) that’s more demand. Currently, I think this is robust enough, especially with it being a 3-of or so in Modern Storm, to call this a buy around $5. I like this card’s chances a lot.

That does it for me. I think we learned quite a bit about Masters sets and next time we’ll be ready to identify the cards and identify when the price will bottom out (it isn’t the same for every card, it would seem) and but smarter. Until then, we’ll just wait. Hopefully something happens with EDH this next week – I’m running out of stuff to write about because Guilds is just NOT capturing anyone’s imagination. Anyway, that’s all my time. Until next week!