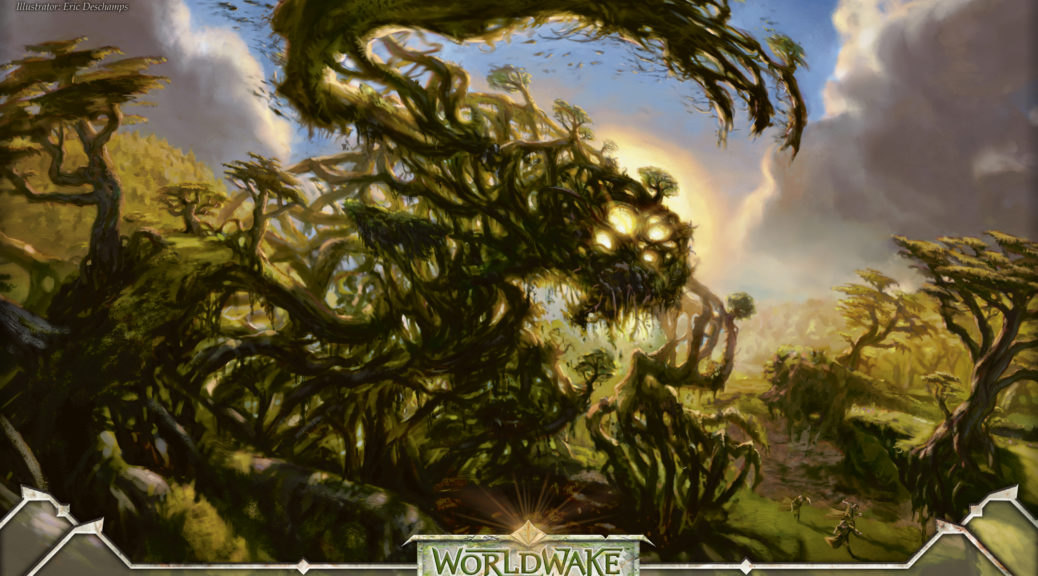 Welcome back, everyone. Last week I started going through predictions for all the Ultimate Box Toppers, and I stopped at 1500 words. Now for the rest of the cards!

Gaddock Teeg ($80): Did you know how frequently this big little guy shows up in Humans sideboards? And Bant Spirits? And Collected Company builds? I didn’t know he was this popular. Interestingly for his Boxterpiece price, he’s only in 400 EDH decks, and that’s the bigger surprise. All of the eBay auctions for him so far have ended up right at $80, but his non-promo price is much more due to the small supply than a great demand. This version has farther to fall, likely to $60.

Leovold, Emissary of Trest ($150): Much of his early listings were for obscene numbers and then offers were accepted, but some closed above $200, he’s settled down here into $150, and I don’t know where the demand will come from. Two things have knifed this Elf in the back: Getting the Commander ban in April of last year, or Deathrite Shaman being banned in Legacy this past July.

In fact, let’s take a look at his price graph:

Ol’ Leo just isn’t popular, and I’m not sure who these folks are that are paying $150 for this version. Original Conspiracy 2 foils are super pricey due to a very small supply, but I don’t think there will be enough demand to keep his price over $75. The regular versions are going to take a beating, too, ending up at $10 or less.

Lord of Extinction ($50): This was one of my pet cards for the longest time in Commander, but it needs help. It’s potentially huge, yes, and awesome to sacrifice, but on its own it is quite meh. The good news is that it’s just popular enough to not be the cheapest of the Boxterpieces, and it’ll trickle down into the $40 range.

Maelstrom Pulse ($60): Let’s take a moment and reflect on how this was in Alara Reborn, and Modern Masters 2013, and then the GP promo, and an Invocation, and now this. That’s a lot of incidental supply over the years, and yet the value has stayed relatively steady. It’s going to end up around the Invocation price, but hopefully higher, because I despise the illegible Invocations.

Fulminator Mage ($80): Remarkably, people have kept their heads on eBay for this card, not letting it go much over $100. It was in Modern Masters 2015 as a mere rare, and the 2015 version put a lot more into circulation than the 2013 or 2017 editions. It’s a popular sideboard card in Modern, given that it’s a Stone Rain on legs, and I think $80 is going to hold.

Kitchen Finks ($70): Another very popular sideboard card, this one is also used in more than a few infinite-life combos, in Modern and Commander. This will be the third printing at uncommon, but this special version is used in enough places that I think $70 is a good and stable price.

Engineered Explosives ($140): One of the great tricks to this card is not just that it’s versatile, but it’s also precise at the same time. It goes into any deck, and many many decks take advantage of this. The regular versions have gotten up to $60-$70, but my attention is on the Invention version at $160. I’m willing to believe that there are going to be more Boxterpiece versions than Inventions printed, and I think that will lead to a slight decrease in this card’s price. I’d expect it to settle in between $100 and $120.

Mana Vault ($160): Again, we have an Invention for comparison’s sake, going for about $180. This is in 23,000 Commander decks online, a number I found stunning and then I realized that it’s fast, easy, combo-oriented mana. My bias as a player from early in the game shows here: I have trouble thinking of Fourth Edition cards as ever being valuable, but this one is more than $20. It’s the most valuable card in Fifth Edition! Here’s the graph:

Where will this special promo end up price-wise? I’m not sure. It’ll be more common and less aesthetically pleasing than the Invention, so I’d expect it to be $125 or so.

Platinum Emperion ($75): This is not a terribly popular card, only found in 3k Commander decks online and one nifty Madcap Experiment combo in Modern. The price has slowly climbed over the years, but the early eBay sales of $75-$100 were the lucky ones. There’s a copy right now on TCG for $60, and the slide isn’t done. It’ll stabilize around $40-$50.

Ancient Tomb ($175): You can have the Expedition version, a likely rarer card, for $225, but there’s one Boxterpiece on TCG for $150. On EDHREC, a full 23,000 decks are running this, and your supply is surprisingly constrained: original Tempest. FTV: Realms, the Expedition, and now this. There’s some Legacy demand too, mainly from Eldrazi decks and Sneak and Show, decks trying to accelerate into broken spells. I like $150 for this, it sees enough play to hold a price that high.

Cavern of Souls ($200, though a wide range of sales, $180 and $260 being the two most recent): If you’d asked me which was more popular in Commander, this or Ancient Tomb, I would have said Cavern, as it’s amazing in every tribal deck ever…but it’s under 20k decks. Go figure. Two TCG sellers have this at $250, and clearly no one is biting there. It’s also in 10% of all Modern decks on top of that, and the combination of casual demand and Constructed playability (even Legacy and Vintage, to make sure Eldrazi aren’t getting countered) and you have a card that I think can hold at or near $200.

Celestial Colonnade ($150): The most recent sale was $120, but the rest were $150, and that forecasts what’s going to happen here. It’s in some Commander decks, it’s popular in Modern control decks that don’t want to waste deck space on attackers, but that leads to a problem with not very high demand. The regular nonfoils had made it to $60, but those hadn’t been printed since original Worldwake in 2010. It’s going to fall farther, and I expect it to settle around $75.

Creeping Tar Pit ($80): Every problem that Colonnade has, Tar Pit has worse. Low Commander demand, miniscule Modern demand, and a price that had been high because it hadn’t been reprinted since the small set of 2010. The ‘manlands’ are in for a rough time, and there’s just enough demand to keep this in third place. You’ll be able to buy the promo for $50.

August 2016 was when FTV: Lore came out, and added copies to circulation. Depths is in about 10% of Legacy decks, and slightly more Commander decks than Colonnade or Tar Pit. The Legacy demand is going to be the main driver of prices, I imagine, and since decks won’t play just one (usually 3-4 copies) that will help with the price somewhat. TCG has one available at $175, but it’ll drop another $50 or so.

Karakas ($150): Once, the original Legends version was at $150, and the judge promo at $200. Now, no version is over $90, all thanks to Eternal Masters. This is going to get hammered as a nonfoil, dropping to $25ish, but the promo is a tricky question. Not a lot of Legacy players will be running out to get more copies, and it’s rightfully banned in Commander. It’s going to fall, but how far? Is this more or less common than the promo from 2012? How about the original in 1994? I think that novelty will keep it around $75-$100.

Lavaclaw Reaches ($40): The new version of ‘may you live in interesting times’ is ‘I hope all your Toppers are Lavaclaws!’ because this is the turd in the punchbowl. Someone’s got to be at the bottom, and you can get a playset on TCG for $120 right now. I hope $30 is the bottom, but I won’t be shocked it it’s $20. No one plays it!

Raging Ravine ($75): Modern Jund plays a couple of these, and that’s about it. It’s a useful land for that deck, after you’ve emptied them of resources your lands beat down quite effectively. That being said, it’s going to fall as well, to $40 or perhaps even $30.

Stirring Wildwood ($50): The eBay prices are misleading, as you can also get this playset on TCG for $120. It’s a race to the bottom between this and Lavaclaw. Godspeed, both of you.

Urborg, Tomb of Yawgmoth ($100): Planar Chaos, Magic 2015, FTV: Realms and now this. That’s a lot of printings, and none are over $60, even in foil. The most popular use, by far, is the combo with Cabal Coffers in Commander. The Tomb is in 45,000 decks online, and don’t forget its uses in Legacy, where it lets Eye of Ugin tap for mana. Still, with original pack foils at $60, I have a hard time seeing this keep this price. It’ll fall a little, maybe to $80.