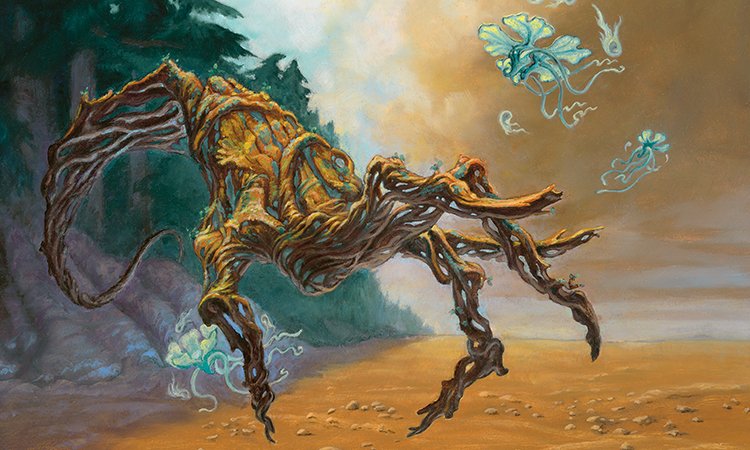 Readers! I am on a bit of a roll lately, writing what are at least my best-received articles if not my best-written and I would like to keep that streak alive and offer some real value this week. Continuing a bit from what we established last week in an article that if you haven’t read yet, you should and then come back and read this one. We established that artifacts and other colorless cards that have the potential to go in any deck tend to go in twice as many decks as similar “tier” staples that are limited to going into only decks of a certain color. The math is a little fuzzy, but we’re coming to a conclusion that “an artifact is basically twice as playable” which isn’t that exact and doesn’t need to be. That rule can be a rule we use every set we evaluate moving forward and as long as you check my math and, you know, agree with me, that factor of 2x can be something that helps you make assessments moving forward.

Armed both with that (vague, but so what?) factor and also the same process we used to come to those conclusions, we can therefore take a look at cards in Ultimate Masters and determine whether they are more or less likely than a card we consider a baseline “likely to recover in price” and make our buys with that knowledge in mind. It needn’t be the only factor we use to determine whether a card is worth buying now (prices have dipped and some are already showing signs of a brief recovery which might not hold, but people are already saying now is a good time to start buying in) but it can inform some of your future buying decisions when weighed against other factors. Or not, just ignore other factors and buy what I say to because you’re not paying for article access to have to think afterward, you’re paying me to think. Well, here’s what I think.

The first thing we need to do in order to figure out if something is above or below our “likely/not likely to recover in price” line is to figure out where it is. I am remaining relatively agnostic to cards used outside of EDH unless they’re used in EDH also. I can’t ignore the effects of other formats but I can mainly stick to cards that are largely used in EDH and to that end, I decided to use the handy feature of EDHREC where you can click on a full set and it will list the cards in order of EDH inclusion. The number one EDH card in terms of total EDHREC deck inclusions from Ultimate Masters? You guessed it. Terramorphic Expanse (You thought it was Eternal Witness, didn’t you? Me too.) I lucked out a bit in that prices hadn’t been updated in a few days so I got to look at the price of the cards before people started cracking packs for the most part which helps me figure out how much certain cards tanked which is a factor in determining how much they’re likely to rebound. 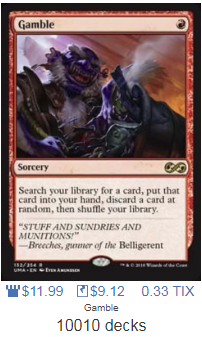 At 10k decks, Gamble is 28th on the list of cards in Ultimate Masters ranked by inclusion. Gamble has had a little play outside of EDH but that was basically inclusion in the Lands deck in Legacy and I hate to say it, but Legacy isn’t really driving prices like it used to. Gamble probably stays the same-ish and with the Eternal Masters version of the card down to $12 on Card Kingdom before the reprint and the Ultimate Masters version currently selling for $3.50, I don’t know if Gamble has the chops to make up for lost ground. If it does, that just means we have a higher degree of confidence in the cards we pick above Gamble and could see opportunity in sub-Gamble picks like Balefire Dragon, Phyrexian Altar and Glen Elendra Archamage. 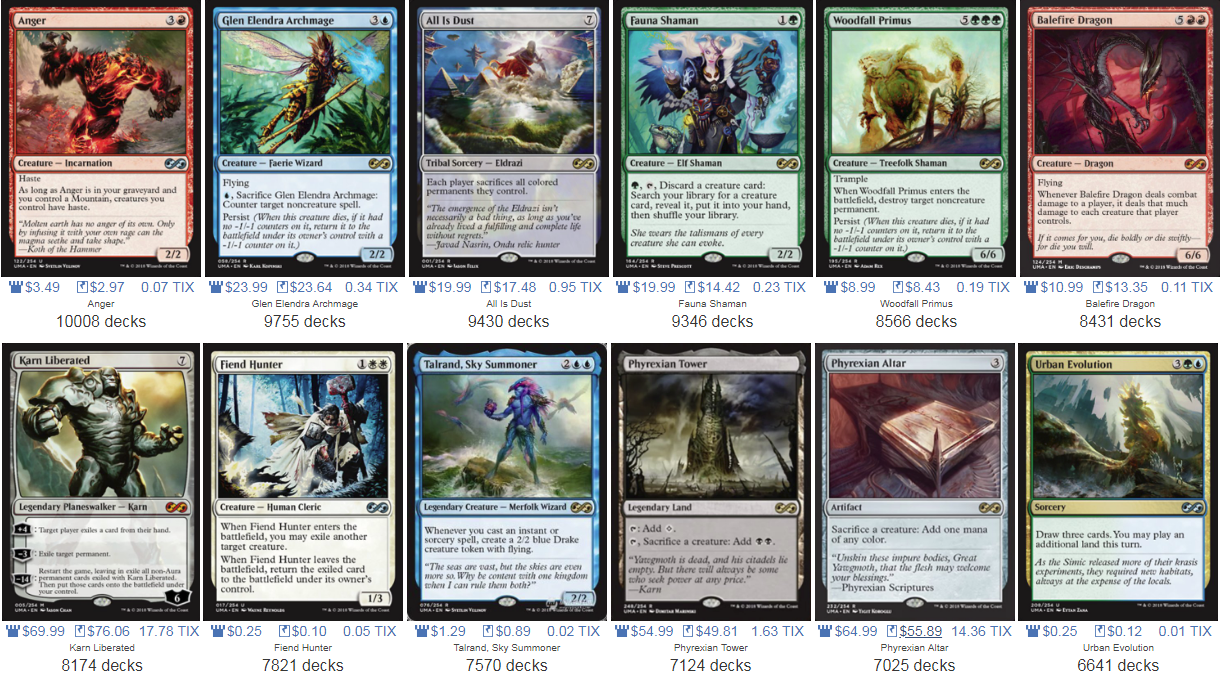 I think if we don’t expect Gamble to regain more than like 50% of the $6 it lost, these cards are even less likely. Phyrexian Altar’s price was largely predicated on scarcity and as much as I loved to harp on how much it needed a reprint, that wasn’t because I thought it was a good investment post-reprint. I think Altar is used in only one format, is in fewer than 10,000 decks and doesn’t quite have the chops to get there. Phyrexian Tower and Gamble get played in Legacy and Karn and All is Dust get played in Modern to the extent that the EDH play may be an after thought but they’re still in the top 40 cards in the set in terms of play. I think we can safely ignore Modern cards and focus on EDH cards. Balefire Dragon’s price seems largely predicated on scarcity even though it’s relatively recent but I think it’s still less likely than Gamble to recover. These cards could go either way, but since there are much juicier targets, why worry about them? If you want them to play with, you can safely buy in at the current price and not feel too bad about it. 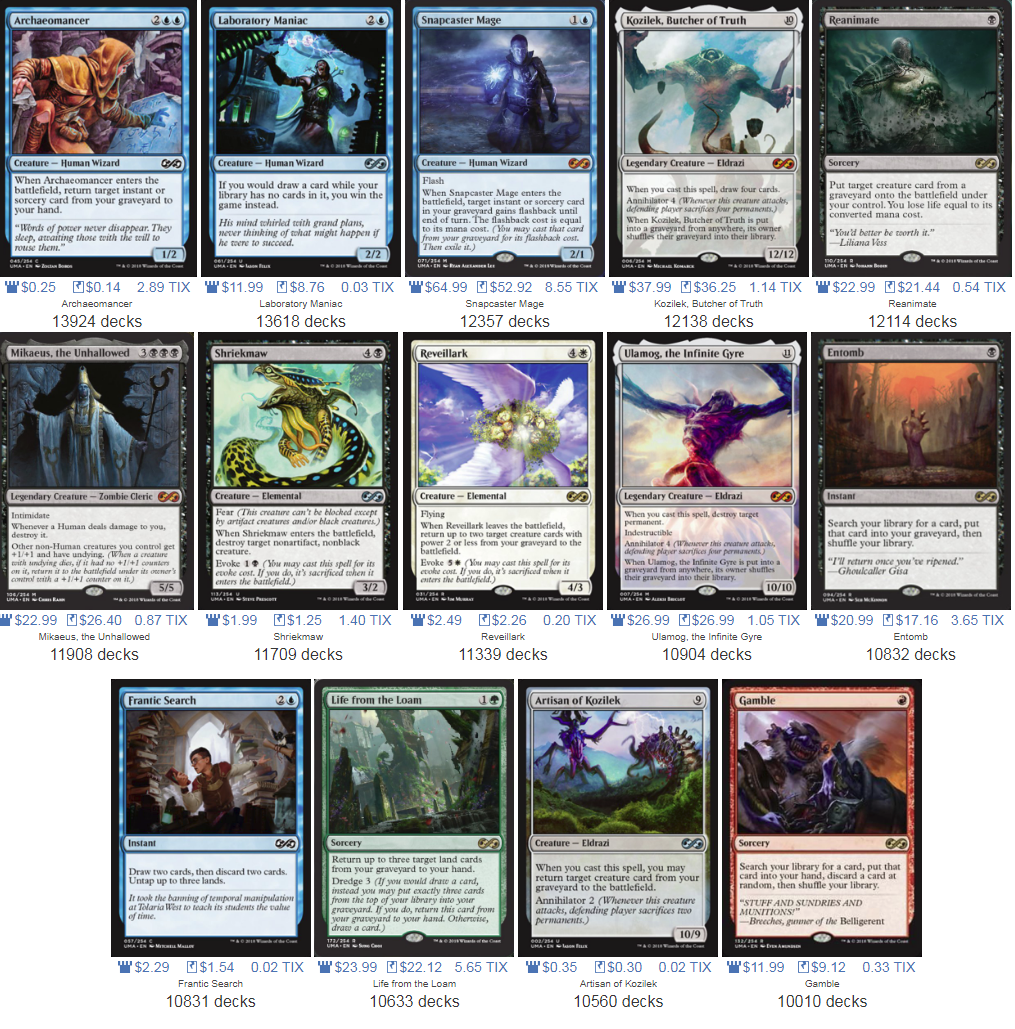 The 13 cards immediately above Gamble look good. I think we can all agree Life From The Loam is likely to rebound just as a gut feeling so drawing the line above it didn’t make sense and even if we’re wrong about Gamble being our baseline, we can agree Loam probably goes up. Now we’re not sorting by EDH+other formats so the order the cards are in can be misleading when sorted solely by EDH demand, but all this does is tell us which cards we should zoom in on and take a second look at. Let’s look at Loam. 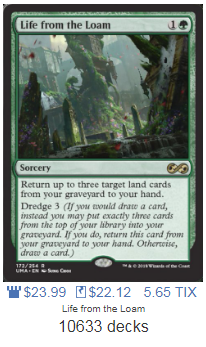 Before the reprinting, the last reprinting of Loam (Izzet Vs Golgari) were $24 on Card Kingdom. Today, the Ultimate Masters version is $14 and could probably go down a bit more – it’s $11 on TCG Player and players are racing each other to the bottom. Either way, it lost about $10. It has recovered exactly that amount before. 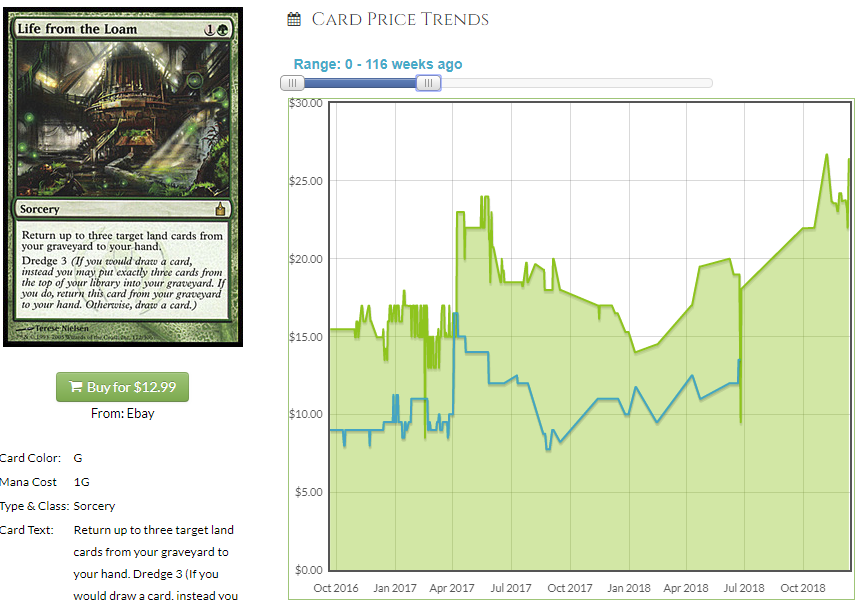 The Lord Windgrace deck didn’t suck for Loam and neither did people toying with Dredge in Modern, but between April 2017 and October 2018, the value recovered and then some, and that’s with a duel deck printing and a Masters set printing. Eventually this will stop recovering, but I don’t think this will be the printing that does it. 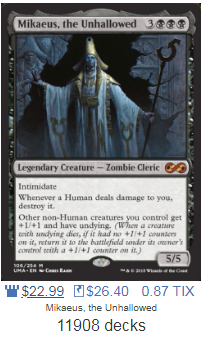 So what about a card that’s not getting any help from other formats? $23 or so and bafflingly more on TCG Player before the reprinting, today you can grab an Ultimate Masters copy of Mikaeus for $14 on Card Kingdom or $12 on TCG Player. If you’re going to do that, you may as well grab the $35 box-topper, which is significantly less than the set foil price. I think Mikaeus, despite only being an EDH card, could see a rebound. It’s in more than 10k decks which is a bit of an arbitrary cut-off and only really means something relative to the other cards current for the number of decks listed but we do tend to see stronger rebounds for cards above that cut-off so I’m going to use it (with caution).

I think given its EDH-only play, Mikaeus is less likely to regain 100% of what it lost than Loam but it’s a mythic whereas Loam is a rare and that should help tremendously. All in all, I’d say Mikaeus is a good pickup right now. 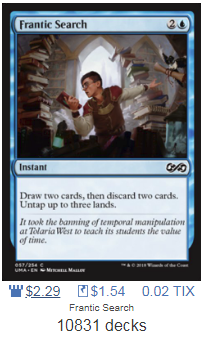 This is worth mentioning because I have a penchant for blue commons in foil and this is the first and only printing of this art in foil. It’s currently significantly cheaper than the much more rare set foil. Card Kingdom is sold out of Urza’s Legacy foils at $33 and you can currently snag UMA foils for $5 on Card Kingdom or a $3 listed median/$1 market price on TCG Player. $1 is very incorrect for a cube, pauper and EDH card like this. Cheap foils of this seem like a Dramatic Reversal or Arcane Denial waiting to happen. 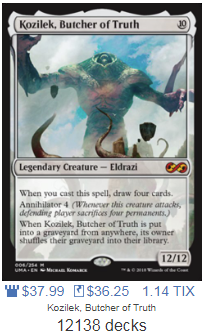 With solid EDH play, this card seems poised to recover a pretty decent chunk of the $18 or so it just lost. A card losing half of its value can be pretty brutal and while Loam seems poised to recover all of its value, copies of Loam go out 4 at a time in non-EDH formats whereas copies of Kozilek don’t. I think this is less likely than Loam to recover all of the value it lost. The one saving grace is that this was always reprinted at mythic and that’s a huge help. 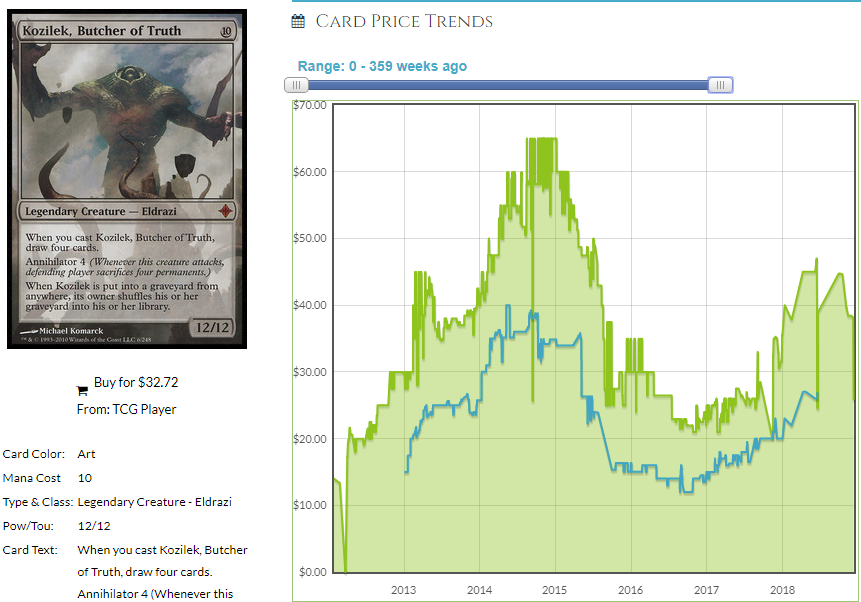 This is a graph showing the recovery last time which was pretty robust considering the peak of nearly $70 was pretty nutty.  I think the mythic printing can help this pull out of the spin and recover roughly half of what it lost.

Basically the cards above this tier seem fairly certain to recover and I’m not sure they bear much discussion. 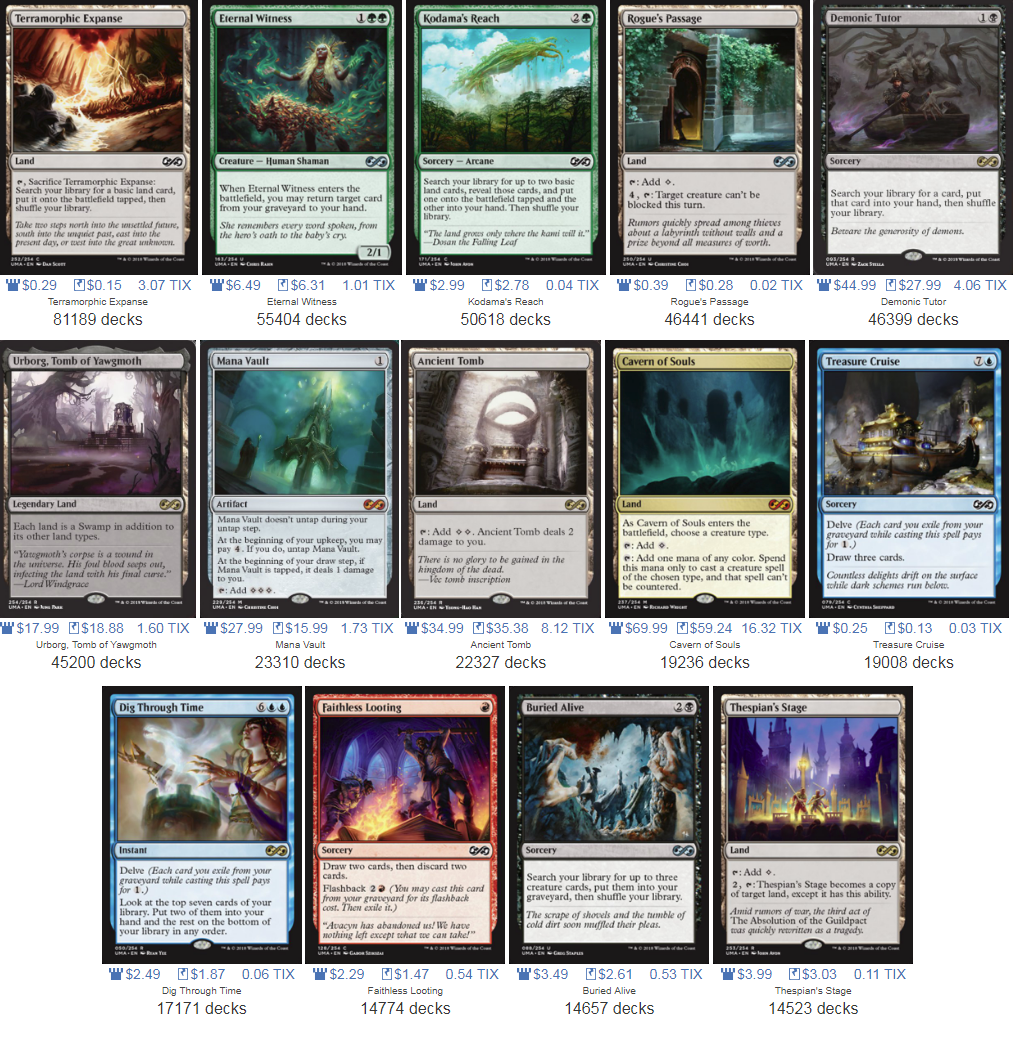 If you were to somehow list the cards by EDH+all other formats’ demand, I think some of the cards from this tier would be lower and lower-tier cards would be higher, but for the most part, I think the stuff in this tier will recover well, provided there is something to recover. I think Thespians’ Stage is probably crushed forever except in foil and commons and uncommons are likely going to lose so little value that it won’t be hard to make it back up, but this tier has a lot of strong cards. Eternal Witness is the poster child for shrugging off reprints, Demonic Tutor hasn’t been printed in like 5 years and even then it was Duel Deck Anthologies so it’s basically been out of print since 2008, Kodama’s Reach has new art which should help it out and Urborg is Urborg. I think the cards in this tier with the obvious exceptions of Rogue’s Passage and Terramorphic Expanse which have both been printed into powder, we should see some strong recovery here. My favorites here are foil Eternal Witness, both Demonic Tutor in foil and not, and Mana Vault.

I think just sorting cards in terms of EDH inclusion can help you think about what has a chance of recovering by seeing the cards “ranked” and while there are some cards over- or under-represented in the tiers due to their play outside of EDH and whether they’re a 4-of in those formats, but for the most part, I think the cards are grouped appropriately. Agree? Disagree? Nitpick in the comments. Thanks for reading, readers. Until next time!