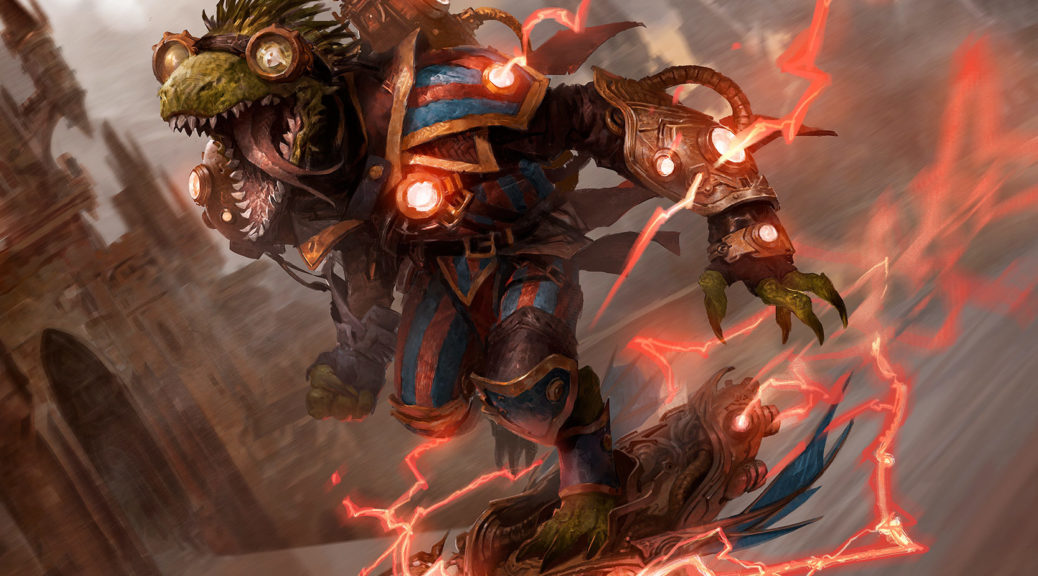 Holy biscuits, but War of the Spark looks like it’s going to be a total blast to play with. I’m looking forward to an environment loaded with value uncommons, excellent removal, and ridiculous numbers of planeswalkers.

We’re in week 2 of previews, and the story is great. I almost don’t care how it ends, I’m going to buy the novel.

What I really care about, though, is the trajectory of prices for these cards. We know from experience that you don’t want to be buying cards right now…except for the one or two we want to. Search for Azcanta at $5. Hydroid Krasis at $12. Mmmmm…how nice that would be now.

So let’s dive into War of the Spark, and pick up a perfect speculative card along the way.

First of all, at this writing Thursday night, we only know six of the booster pack mythics (there’s going to be fifteen) and two more mythics that are the buy-a-box promo and one of the planeswalker decks. You can always identify those extra cards by having an improper fraction for the collector number. Tezzeret, Master of the Bridge, is 275/264, for instance.

Tezzeret is the promo and the biggest preorder at about $23 per copy, but not available on TCG yet. That’s the eBay price. He drops into play and immediately domes all of your opponents, gains you some life, but only if you’ve got artifacts in play already. As befits the half-metal man, playing him without lots of artifacts is just pointless, so his usefulness is currently questionable in Standard.

His preorder price is a little high for my taste, frankly. Tezzeret, Agent of Bolas is at nearly $20, though there’s a Mythic Edition keeping that price low. I’m not a buyer at this price, but I’ll be thinking about it if he falls to half that, but most versions of this card are still pretty cheap. I will not be surprised if there’s a brief window to sell him at $30 when first released and Commander players lose their good sense, but that window is going to be relatively narrow.

The first presales were all above $20 on this, and the slide isn’t done. It’s clearly a powerful card, at even the base stats of a 6/6 trample for five mana. The attack trigger and the ‘third from the top’ clause really elevate this card to being amazing for Commander, but I’m not sure where else it’ll get played. The current mono-red decks don’t want a five-drop. There’s some Gruul decks running around that will likely add this, play Impervious Greatwurm, and pull off the combo three times while going 2-3 in a league.

I’m not buying this ahead of time.

Teferi’s clause about your opponent only playing at sorcery speed is incredibly relevant in this Standard format. Turns off most of the Wilderness Reclamation decks, defangs a big part of Esper Control, and lowers the reactive nature of the Red decks. For three mana!

I can believe that decks which want Baby Teferi will play a lot of copies, maybe even the full four. Your opponent spending burn spells or attackers on him is quite a blessing, and with his bounce, can even out any card disadvantage.

What I’m not sure about is this high price of a Standard rare. RNA’s most expensive are shocks from $7-$11 and then Smothering Tithe at $12. The only rares from Guilds of Ravnica above $5 are the other five shocklands. I don’t think $20 can hold right now.

At the end of WAR’s season, or about July, I’ll be interested in picking up Teferi int he $10 range, but he’s a stay away for now.

She’s very good and her static ability is top-notch when combined with her minus ability. Delightful and elegant design, but she’s kind of underpowered for six mana. At her mana cost, planeswalkers should be a lot more commanding, and there’s a lot of decks which won’t flinch at the -2 ability.

She’s outstanding in Commander decks which can take advantage of what she offers, so while I think she will slide another couple of dollars, I’m not buying yet.

If aggro white decks are top tier, then how is this not one of the hottest preorders? It’s a two-mana 2/3 flyer! Even with no other text that’s very good, and he’s got the upside of messing with some fringe strategies AND this is exactly the card and deck to make you want to have Mox Amber.

Tomik is going to go back up. I know he got a lot of hype early and has suffered since, but don’t fixate on the text box. Just as a creature, he’s quite above the curve.

This is exactly the top end that mono-red wants, oversized for its mana cost and if it hits, you get to cycle away everything you don’t want in your hand. I also love picking up cheap specs, and the lack of attention the card is getting just means that the week one results will be that much more impressive. This is at least a $5-$7 card.

There’s a lot of nonfoils out there, from Gatecrash and Commander 2016 and then the Anthology, but the foils are a lot scarcer and with the proliferate goodies we’re getting, all the counters matter cards, this is one of the best cards for those decks. It’s in 7000 decks on EDHREC, less than 50 foils on TCG, with just a handful of those being NM condition.

The Simic mythic has a double proliferate on death trigger, so that’s harder to abuse in Commander, but I believe it’s got legs. Or fins. Tentacles? Who knows in the Combine.

2 thoughts on “To Preorder or Not to Preorder?”