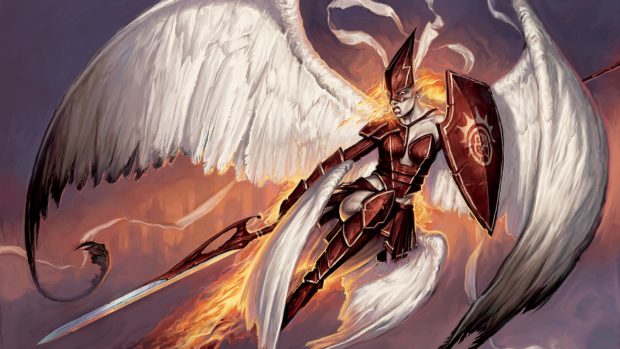 We used to talk a lot about how things tended to meander a bit in EDH land. Prices were going to move based on authentic buying patterns and not on speculation. Things are moving a little more swiftly these days with more people having at least one EDH deck and a little bit of knowledge about the format, decks being more exciting to build (and sometimes more obvious like in the cases of Xndrsplt and Okaun, for example, who were exciting AND obvious and whose cards all spiked immediately) and because of, well, me. Me and people like me, writing about how the speculation community was ignoring EDH because they didn’t play it and how foolish that was. Some decks and their cards are going to take a lot longer to move – we saw this with Vannifar cards moving immediately and Teysa cards taking a week or so and Nikya cards taking several weeks and then some Vannifar stuff like Craterhoof going up much later.

What we’re seeing now is Feather cards bounding upward within 24 hours of Feather being previewed, which is kind of alarming because not only is the deck a little less obvious if you don’t think about how you’d actually build it, some of the cards I expected to take longer have popped in the last day, also. Let’s look at Feather, first up.

This card is obviously ridiculous with good stats, high recastability given its low CMC, relevant creature type and most importantly, actual card advantage in a Boros deck which, what? I don’t even know how to respond to that.

I expected people to scoop some low-hanging fruit here early. Sure, the cantrips themselves are pretty much immaterial since I think it’s real low reward to speculate on something like foil Temur Battle Rage, but the mechanism for finding the right cantrips is material, I think, and it’s a card I’ve made money on twice already. We thought a reprint nerfed it, but it’s BACK, BABY!

What a precipitous climb from $0.50 to $10. It’s likely to settle lower and if you didn’t snag these or already have them, you likely aren’t benefitting much from a 96 hour hype price. It was basically too late to warn you as soon as I noticed, which happens. What I did NOT expect was for cards that people really would have needed to think a little harder about to go up. Maybe it was people posting every rules interaction I could think of and the high volume of cards that form soft locks with cards in War of the Spark (Mycosynth Lattice popped within minutes when people thought about using it as a lock with New Karn, which is, whatever. You don’t see the Lavinia decks people theorycrafted on Twitter and Knowledge Pool was about to tank until it was rediscovered as part of a new combo with WAR card. This is a long-ass paranthetical, sorry.) because people see “lock” and it makes cards pop.

It takes a lot of mana to do it, x(x-1) mana where x is the number of people in the pod, but you can keep everyone from being able to play non-creatures on their turns indefinitely. x(x-1) mana is usually either 12 or 20, so it’s a real investment. However, even if you only do it on your own turn for x mana, it’s going to Xantid Swarm everyone so you can do your shenanigans, and you can keep getting fury back as long as you target one of your own creatures with it while Feather is in play. And hey, if you want to do it on your turn and theirs, we’re now talking x squared mana which is almost always at least 16.

People latched onto Fury as quickly as they did Sunforger – so quickly in fact that people who whine about this sort of thing are whining about Sunforger and don’t seem to have noticed Fury selling out. This means the speculators are a day or two ahead of the theoretical theorycrafters who typically are the ones who build the decks weeks later and buy the cards from me. We need to dig a little deeper if we want any hope of finding some cards that are likely to go up. Luckily for us, I know that this exact deck already exists, basically 90% in the form it’s going to end up when people build it around Feather. I know this because you pay me to know about EDH. Behold, Feather from 5 years ago.

In what way is this Feather? Well, in every way that counts. It has this weird, team Prowess that people have been pairing with cheap cantrips for years and this is already a Sunforger / Zada Hedron Grinder / Monastery Mentor / whatever else deck. We can go deep on Anax’s EDHREC page and find the stuff Feather players have no idea they need yet. They are going to buy $12 sunforgers from some guy who doesn’t even know anything about EDH, why not buy some expensive cards from us because we leveraged our knowledge or paid some dude named Jason for his? Either way, let’s look at what I see as potential overlap between the decks.

I think the best builds are going to go wide because you get the most out of Anax and Cymede and Zada being in the deck. True, you can make Feather a kind of Voltron deck and just Temur Battle Rage her and win via commander damage, but if you’re casting Temur Battle Rage at Feather, why not cast it at Zada and swing with an army of 1/1 soldiers from Assemble the Legion? Going wide makes the most sense and has the most synergy with the cards already in the deck. Of the Voltron stuff in Boros, most of it is Enchantments and Equipment and you’re not even playing to Feather’s strengths. I truly think the deck will be a go-wide build most of the time. That said, here’s the Anax and Cymede stuff I like. I linked their page, so take a look yourself.

I have believed in this card a lot longer than a lot of people so I bought in dirt cheap. It has decent reprint risk but it’s also gone from 25 pennies to 25 dimes so what do you expect from it on top of the 1,000% gain I’ve already realized with a lot of my copies? (I bought in at $0.50 and when it went lower, I bought even more. It was reckless and dumb and I should have eaten a reprint by now). I expect this to hit $5 fairly easily if it’s not reprinted in Commander 2019. The card is too good and with Boros being less boring, it’s a card you just jam in there.

Foils are growing at the same rate if you like that kind of thing. I think if it goes from “fringe EDH playable” to “multideck staple” or “Card in deck of the year” then it could go beyond a 2x multiplier and your gains go up exponentially. $6 is a high buy-in but it’s also a solid card.

Mentor is actually trending down and Feather decks could just be the shot in the ass this card needs. With Sai, Master Thopterist and the new Saheeli, not to mention Genesis Chamber, my personal favorite, Mentor decks in Vintage need Mentor itself less and less. It’s not stellar in Modern where Young Pyromancer is the reigning champ, either. The time to buy Mentor has never been better if you think it has upside and anything under $10 seems fine to me.

A flying Zada with pseudo-protection against removal spells if they have creatures they care about? This has bumped a bit but it’s not done, and it’s a mythic from a few years back. Yank these out of bulk binders.

The foil has basically doubled overnight but if you find these mispriced, go to town.

This is steadily shrugging off a reprinting in a commander deck that was the least popular initially and the most valuable later. No one wanted to jam Iroas, but Douglas Johnson from Brainstorm Brewery made a mint buying the decks for half their singles cost and shipping Iroas, Urza’s Incubator, Blade of Selves, Magus of the Wheel and Fiery Confluence. The Kalemne deck was a treasure trove of goodies and Iroas tanked hard because there was literally 0 pressure on the card to be worth anything. Now it’s worth something – it’s worth playing, so expect it to also be worth more money presently. Look at that growth for Heliod’s sake.

Don’t play a Sunforger deck that doesn’t have this in it. This was printed a lot and it’s having a hard time recovering, but this impetus may be the impetus that does it.

Or buy the one foil printing out of 5 total printings. It’s on an up-shot already.

Finally, here are a few cards you won’t find on Anax’s page that I know about because that’s my job.

Ship has sailed on the foils, imo. $0.50 would have been where you buy these.

This price is actually on a bit of a downswing, having peaked at about $4.50 earlier. I don’t hate this buy-in price at all given its two printings, one of which is shook off. This goes in Feather decks for sure, especially if you’re going wide, which you should.

So the obvious stuff like Sunforger and Aurelia’s Fury got snatched up. Don’t complain, dig deeper. Intruder Alarm spiked early and was practically in price freefall by the time anyone remembered the deck would play Craterhoof. I made a lot of money ignoring what they focused on and focusing on what they ignored. Thinking differently usually means thinking ahead, so let’s stay positive. There’s a lot of treasure left when the first wave of strip miners goes through. Until next time!

Oh, one last thing – I was looking for HD pics from the set and I found one of Dovin Baan that they had to release because so many nerds tweeted “Durr he’s supposed to have 6 fingers, not 5” and they had to show an HD pic so you could clearly see all 6 fingers. Magic players are the worst, that’s all I wanted to say. Good day.