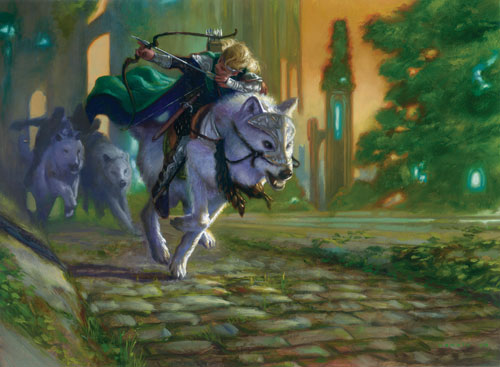 There have been a few surprises gleaned from the (admittedly preliminary) data from EDHREC. Things you may not have predicted have panned out and it’s worth exploring things we might not have considered. For example, if I asked you to, without scrolling down, name the Top 3 commanders on EDHREC based on the first few hundred decks with War of the Spark cards submitted, I’m confident you’d get at least 1 if not two wrong. The obvious cards have popped already but there is stuff no one is even thinking about except for people building decks. Got your Top 3 in your head? Here’s the big reveal 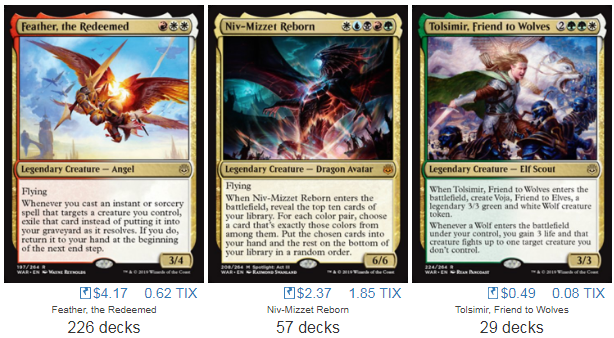 Surprised? Yeah, you’re surprised. You probably nailed Feather – it’s #1 with a bullet. Niv you maybe got. But Tolsimir in the Top 3? Above Ilharg, Roalesk, Massacre Girl, Krenko, Fblthp, Oketra and Kefnet? There’s no way you guessed that. But if Tolsimir is going to be a Top 5 commander in the set, built half as much as Niv-Mizzet and twice as much as Oketra if current trends hold true, we should take a look at what’s in the deck because there could be some cards to get no play that are about to see some.

Here’s the page for all of War of the Spark ranked by raw number of inclusions. If you want to learn to find it yourself, go to EDHREC’s homepage, click on “sets” up top and select War of the Spark from the dropdown. You can also click on the full list to bring up a page with every set. You should take an hour to look at every single set some day to see which cards are used more or less than you thought. Everyone makes assumptions based on their limited experience, their own playgroup and their biases, but having data to re-center your point of view is useful and we’d be silly to ignore it. The War of the Spark page tells you the commanders with the most decks as well as how many decks each card is in as a part of the 99. As more data comes in, the picture will become clearer but for right now, let’s focus on Tolsimir decks and what go in them.

I’m not super impressed with how everyone is building these decks and that’s likely a result of only casuals building the decks. That said, casuals tend to shop at Card Kingdom and if the cards sell out at Card Kingdom, they’ll raise their buylist price so it’s worth it to pull out any of these wolves you have in bulk or especially bulk rares. You were lucky to get a dime for Wolfbriar Elemental last week but if CK sells out at $0.35 or whatever they’re charging now, they’re cranking the price to $2 and they’ll be buying for $0.50 so it’s worth it to yank all bulk wolves and set them aside to see what happens to to them. Per the decklists I’m seeing, I’d yank the following bulk cards.

Rot Wolf (this shouldn’t be in your bulk, anyway, it has infect)

Watchwolf (FNM promos aren’t in bulk but have upside)

Fang of the Pack

Howl of the Night Pack

Spirit of the Hunt

If Tolsimir gets played as much as early data indicates, this stuff won’t be bulk in a while. Tribal decks are a draw for casual players and the deck is surprisingly potent, especially if you Ghostway your whole team in response to some removal and it all comes back and fights everything that survived.

I said I wasn’t too impressed with the builds because people aren’t trying to flicker their wolves, preferring to go heavy into tokens. I think tokens are pretty good because Green and White are the two colors that benefit the most with their Annointed Processions and their Cathar’s Crusades. There’s another reason it’s good to be in White if you’re both creating a lot of medium creatures and fighting a lot. You don’t have to fight fair. 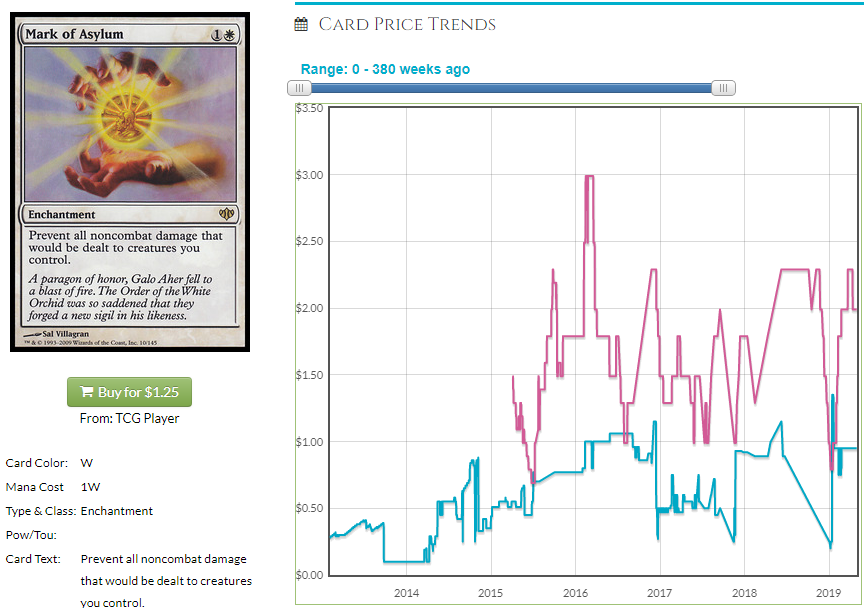 Mark is a card that is on a second spike, a concept I talk about a lot. It means that the first time it spiked, rather than pay the new retail, people were able to find old copies at the old price at their LGS or trade them from people or just find them in their bulk rares. The market ferreted out all of the hidden copies and people buylisted them or sold them to players. When the card goes up again, there won’t be loose copies to satiate the sudden demand and people will have no choice but to pay retail, which will go up harder and faster. It’s a concept we see play out often, and given how brutal Mark is with Tolsimir, I expect this card to be tied to Tolsimir’s trajectory. You win every fight with Mark in play and that’s basically cheating. 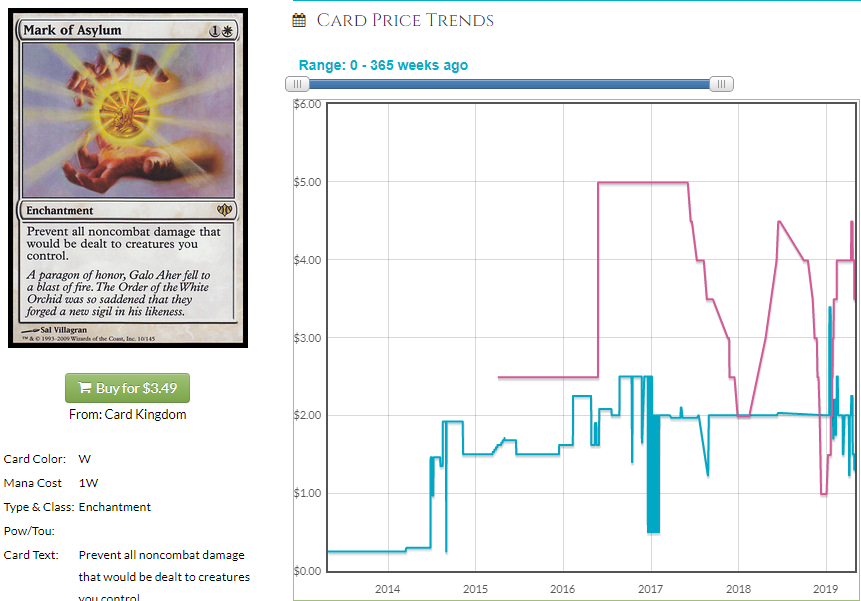 Foils are below their historic high as well. The buylist is pretty funky-looking which happens when someone spikes the buy price to restock then drops it again when they get enough copies. I think both the foil and non-foils are a play because here at MTG Price, we like EDH foils. I think they’re a pain and take too long to sell, but if you’re dealing with 10 copies, you should have a fairly easy time outing 10 copies. Besides, the buylist price at one point got to what the retail price is today and if these go up again, you could make a few bucks per copy just selling them back to the buylist. I’m not touching foils but if you’re into that, these are like $4, which is basically what the non-foil spiked to. 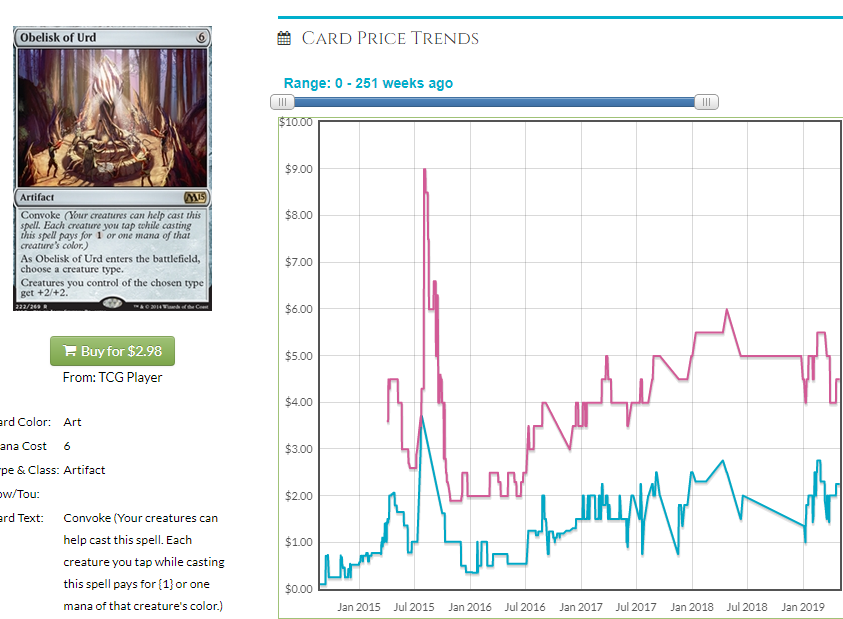 Obelisk has been holding steady for a while and I think it’s due for a bump. Tolsimir is a pretty good deck for Obelisk – you don’t mind tapping tokens to cast it, your tokens power and toughness matter more than in most decks since they’ll be fighting the second they come in and it’s likely a budget deck so this is going to get the nod over more expensive buffs. This is also a 5 year old card at this point, is tough to reprint given its convoke ability and it’s an artifact which means it can go in any color tribal deck in the future. That’s all a recipe for decent value. I like this as a pickup now, especially if you trade for it. 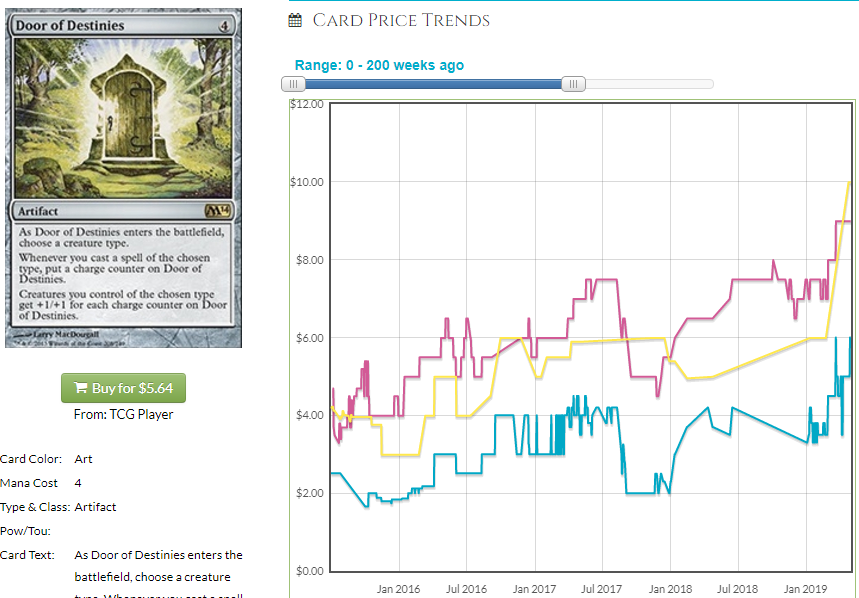 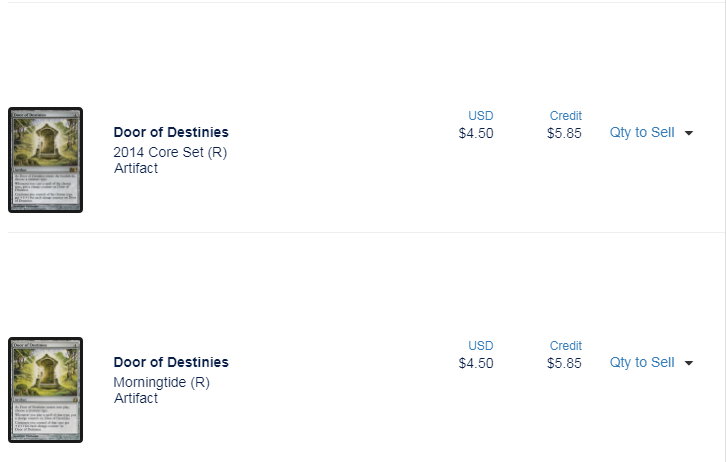 Card Kingdom’s buy price. CK has these at $9, Strike Zone (yellow line on the graph) has them at $10, TCG Player has them  for basically CK’s buy price. If that doesn’t scream “impending price correction” I don’t know what does. I think if TCG Player sells out of Door, it gets relisted at $8.50-$9, which means CK sells out next and then the buy price goes up even more. If you’re into CK credit, I bet you can arb these pretty soon. I mean, you ALMOST can right now.

You know what almost never happens? This. 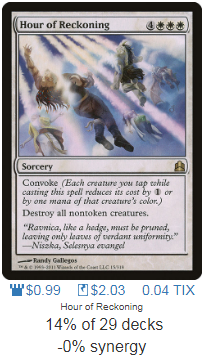 Do you see it? Keep looking until you see what I see. Give up? 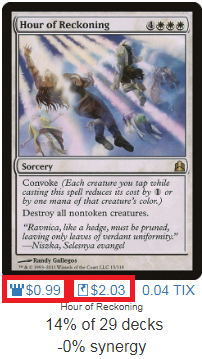 It’s cheaper on Card Kingdom than it is on TCG Player. That’s weird. I checked – it’s legit.

It’s rare that this happens and hard to know why it happened or what to do about it. The Guild Kits were cracked to a much greater extent by people on TCG Player than by CK. I think the prices will converge but I don’t know which will change. All I know is that this card was printed 3 times and it’s still approaching $2 and that’s worth knowing about. If you’re heavy on tokens (and you likely are if you’re abusing Voja’s CIP ability with token doublers to KO a 12 toughness creature or 4 3/3s when you summon Tolsimir), this is a wrath that basically wins you the game. It also basically costs 3 mana if you have tokens galore, so remember that.

Tolsimir being in the Top 3 was a surprise and even if it doesn’t hold, it helped us identify a few cards that we should be thinking about and reminded us to yank wolves out of our bulk, so that’s a worthwhile endeavor to be sure. Keep checking EDHREC and stores like Card Kingdom which has a price integration deal with EDHREC so that people can buy directly from the site with one click for more price discrepancies like these.  Until next time!