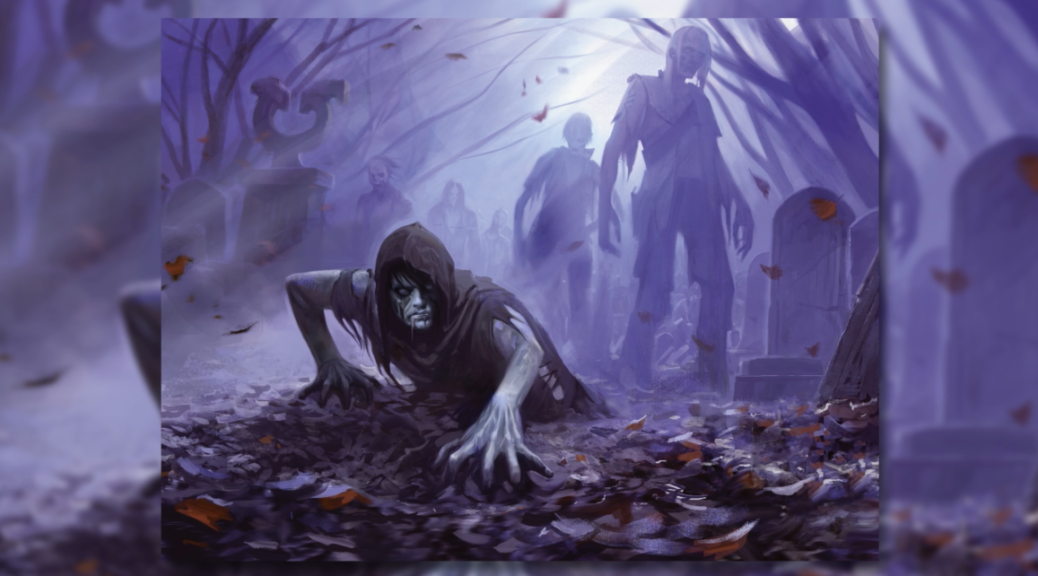 Without a doubt, the topic on everyone’s mind this last week was War of the Spark Mythic Edition. Despite teaming with eBay to sell the product via their platform, WotC still ran afoul of, well, the internet. eBay’s counter indicated something like 48,000 orders had been placed, a curious number considering WotC was only releasing 12,000. Doing the math here, you’ll realize only about a quarter of the orders were accepted, with the remaining 75% getting “rip ur order” emails. The self-righteousness takes were flying fast and furious on Twitter in response. One of the more fascinating aspects of all of this is that this type of event isn’t uncommon whatsoever in other collector’s markets. Sneakers, toys, albums, admission tickets, whatever. An low supply is put up for sale at one exact time, everyone jams on their “submit order” button hoping to get lucky, and those that don’t are bummed. Why Magic players think they’re alone in this ultra-capitalistic occurrence is beyond me, and why they felt they’re owed compensation is even more bewildering. 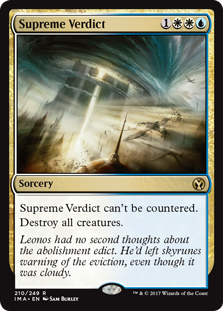 Anyone sitting down to play a game of EDH is undoubtedly going to, at some point, hope they draw a wrath this turn. Nearly every game has that moment, or more likely moments, in which you’re desperately looking to find a wrath to bring an opponent’s game-ending board state under control. They’re an eternal aspect of the format. And at the moment, one of the best ones out there is Supreme Verdict. Four mana. Two colors. No counters. (It doesn’t exile, but nothing’s perfect.)

Verdict was a ripe choice about two years ago, in the middle of 2017. Then Iconic Masters strolled along and buried the price in the ground for awhile. Anyone that had picked up a few sets shoved it in the back of their spec box, and the rest of us just sort of forgot it existed. Here we are now, some 24 months later, and Verdict is positioned well again.

At almost 25,000 decks, Verdict is absurdly popular. It’s the fourth-most popular gold card in the format, in fact, and the gap between Verdict and first place is maybe 10%. Clearly there’s demand. And given that it’s such a universally popular effect, it’s not the type of card you own a single copy of. You might need an Accelerate for your Feather deck, but you aren’t going to need more than one. Verdict should probably find a slot in the 99 of every single deck with the requisite mana colors.

You’ll pay $6 to $7 for a foil today, with IMA and RTR copies relatively close in price. A few playsets later you’re up to $10 or more, and then prices are hitting $15 to $20. SCG has basically zero in stock, and I don’t see 50 CFB copies anywhere, which means TCG is likely a lion’s share of the liquid inventory. I don’t think you’ll go wrong picking up any of the foils — IMA, RTR, or the promo — and waiting a few months.

Venser, the Sojourner (Both) 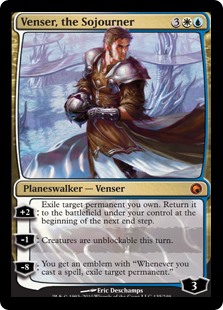 With planeswalkers everywhere in WAR, old walkers are seeing their utility and applicability increased across the board. Once you’ve got three or four in a deck, there’s a reward for adding more, and a reward for adding support. Proliferate effects, etc. become better the more walkers are in the deck of course. Having a walker sub-theme is easier now than it was a month ago, simply because of how many more choices there are, and the fact that the static abilities add a vector that didn’t previously exist.

All of this is to say that there’s 36? new reasons to consider adding Venser, the Sojourner to your deck. If you’re building in a walker theme, he’s an appealing target. Especially his +1, which is even better now than it used to be. Most walkers prior to WAR were able to control their own loyalty via addition and subtraction abilities. This new slate often finds themselves without addition abilities, meaning you get two to three shots of their minus, and then they die to any random damage. With Venser on the table, you can use those walkers twice and then blink them, bringing them back to full life. Of course, that ability is still good on 187 creatures. His -1 is also still great, enabling massive alpha strikes, and now also working to give a few assassins the ability to sneak past blockers and take out opposing walkers.

At about 11,000 decks, Venser is fairly popular. He’s no Supreme Verdict, but most aren’t. Notably, his price hasn’t jumped from WAR yet, which we’ve already seen in several other cards. Both copies look good here. Non-foils are in short supply at $15, with no deep inventory anywhere. Twenty people picking up a copy for a new deck will just about empty what’s left of the NM supply. As for foils, well, there’s three. Yes. Three. What do you think those pack foils will look like in price soon?

It’s been just about a year since the judge Commander’s Sphere was first released, which puts us at the end of its lifecycle. I can’t promise you no more will appear, since, well, Wizards, but if there are any left in the pipeline, it shouldn’t be many. This is the tail end of the run.

With that, we’re going to have the only foil copy for what I imagine is a while of Sphere, a card which is found in, oh, 68,000 EDHREC lists. Yes, 68,000. That makes it the 10th most popular card in the format, I believe. The only foil of the 10th most popular EDH card? Which is a colorless mana rock that fits in every commander deck ever built? I’m on board friends.

Sphere’s raw popularity does most of the selling for me here. I’ll follow up by pointing out that supply isn’t deep, with less than 40 on TCGPlayer and none on SCG. You’ll be able to get a few copies around $16, and there are several below $20. So long as the supply pipe is drained you’ll see those prices started climbing rapidly, and I’d expect $30 to $40 foils in fairly short order.