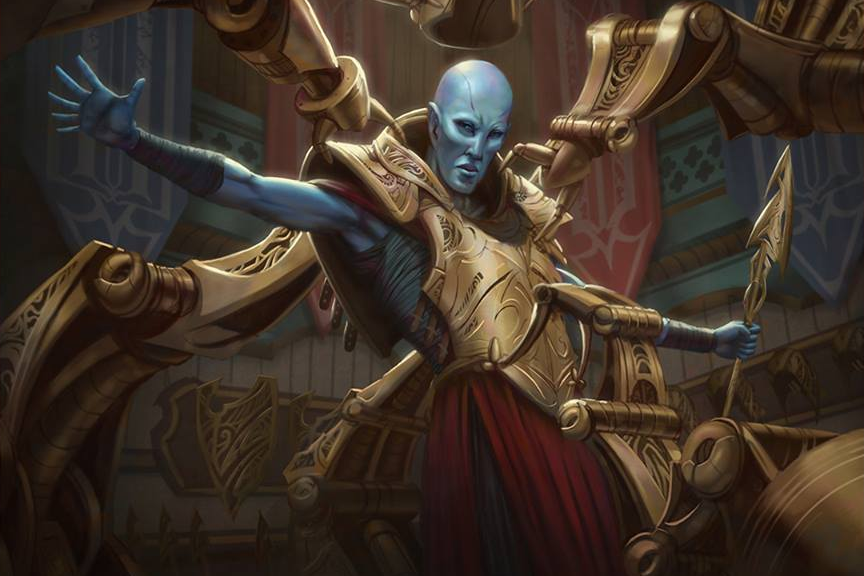 War of the Spark is proving to be fairly exciting set, wouldn’t you say? Standard has seen quite a few cards make an impact, an impressive feat for a spring set. Teferi, Time Raveler is leading the charge, with his static text frequently managing to have an impact, and both his activated options finding opportunities to shine. At the same time he’s getting it done in Modern too, where his static ability is arguably stronger, especially in control mirrors, and his +1 letting you get value out of late-game discard spells by casting them in your opponent’s draw step is likely to be explored further. He’s not the only card from WAR to matter of course, just the one leading the charge. Mostly though we’re all just eager for next week, when Horizons spoilers start, which should open countless doors.

Feather is inarguably the most popular commander from WAR, and I expect the bane of stock pickers everywhere, cursing the need to find 25 garbage commons from 25 different sets for every jerk that decides to build the list, all for $11. Meanwhile, in second place, is Niv-Mizzet Reborn. Now, why are people rushing to build Niv-Mizzet? That I couldn’t tell you. “Draw a few cards” isn’t what I’d consider appealing on a commander, even if you get cute and blink him. Muldrotha draws you your entire graveyard every turn. Meren draws the best creature in your graveyard and casts it for you every turn. Niv-Mizzet…draws you three cards? Once? Whatever guys.

Regardless, Niv’s momentary popularity gives me a chance to shine a light on an excellent spec. I liked this bad boy a few months ago, and while it hasn’t popped yet, I’m confident it will soon enough. Merciless Eviction shows up in over 26,000 EDHREC lists, which lands it at third place on the “most popular multicolored cards” list. There’s no way a card ranks that highly in EDH without finding itself in multiple decks within a single person’s collection. You’ll want a copy for your Niv-Mizzet deck, your Teysa deck, your Oloro deck, and so on.

A few copies are floating around at $11 and $12, but not many. After that it’s a quick ride up towards $20. Snag your cheap copies now, because these are going to be $25 before middle schools are out on summer break.

Another strong card that I noticed while browsing Niv-Mizzet lists, Rashmi is cascade-on-a-stick. Whereas Yidris gives all your spells cascade, which is awesome, it’s a lot harder to make it work. Rashmi doesn’t give you quite as much power, as you can’t cascade multiple times a turn, but her effect is consistent and useful. Cast a spell for free, or draw a card. Every turn, including your opponents. Hard to complain about that. She’s a fun commander or a powerful inclusion in the 99.

At the same time Rashmi lands in over 6,000 EDHREC lists, and again, I can see players wanting more than one of these. Since Rashmi is generically useful, if you’re the type of player to want her in one list, you’d want her in each. Contrast that with, say, Sieze the Day, the type of card that’s going to find homes in only specific lists.

What drives Rashmi home is the price and supply. You can find a few for $10 to $12, and then they’re $16, and then they’re $20+. Rashmi is still relatively new to EDH, releasing a little over two years ago. We know that two years tends to be a rough breaking point for supply/demand, and it’s looking like she’s going to tip into the twenties in short order.

Fell the Mighty is a cool card. You cast it, a bunch of big stuff dies, and your small stuff survives. Fairly straightforward, and something approaching a one-sided wrath, given appropriate application. As a commander-only release supply hasn’t been deep at any point, though it’s been overall sufficient. Prices stayed low, typically under a dollar. Then people started getting on the train this past fall, with Guilds of Ravnica’s release, and prices haven’t stopped moving yet. There’s no reason to expect them to slow down either, with supply not growing, any reperint likely at least six months off, and a new commander, Feather, to drive further sales.

Using Fell in Feather is obvious. Cast Fell targeting Feather, kill everything with more than three power. Do whatever else to make Feather stronger, attack, hurt people. Next turn, oh hey, Fell is still in your hand. Cast it again why not? Destroy their idiot blockers again, and hey, why not next turn too? While Feather isn’t the only good deck for Fell — I love it in my Sidar Kondo build — she’s certainly the latest to apply the tool well.

There are no foils, so that isn’t even an option. As such, non-foils have been eaten away, with supply lower than you’d expect for a twice-printed Commander card. At the very least you’ll want to find your own copy, and I’d be surprised if paying $7 or $8 each didn’t work out for you in the future.