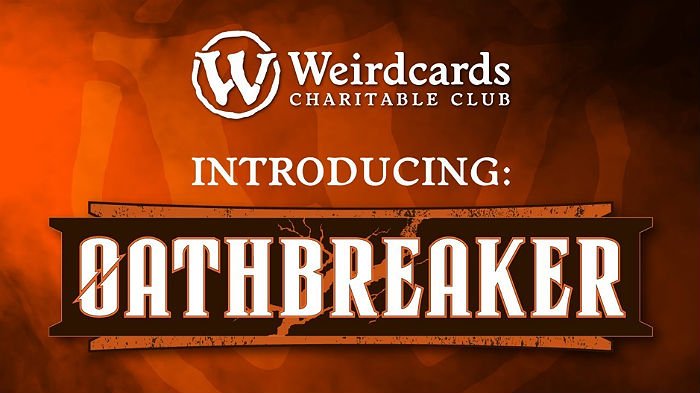 Like, you’re welcome. Sincerely. That’s a phrase I find myself saying a lot lately, unprompted. My daughter has excellent manners 50% of the time and 0 manners 50% of the time which averages out to having OK manners all of the time and on a good day, her manners with strangers are good and with me are suspect which makes me look like a good parent to strangers. You don’t know I did the equivalent of getting you your paints from a shelf you can’t reach, rinsing your brushes and tearing a page out of your Peppa Pig painting book because you can’t quite handle perforation, but I promise I’m doing all that for you and more. I mean, I feel like new formats are a pain and I hate to learn new things and I did that for you. Is Oathbreakers Brawl or is it Tiny Leaders? It’s hard to tell how many months it will last before it disappears under the weight of the collective apathy of an entire community. It’s also possible Oathbreaker catches on and is around forever. Anything is possible. 2016 taught me that.

I know what a portion of you are asking –

Oathbreaker is a 60 card, singleton format with 2 commanders – a Planeswalker and a “signature spell” that both start out in the Command Zone. The spell must be an Instant or Sorcery. Your deck is bound by typical color identity rules like in EDH so new Teferi can only have Blue and White cards. You can’t cast your signature spell unless your “Oathbreaker” is in play and you have to pay the commander tax every time you cast either one, so the spell keeps getting more and more costly. It’s unsanctioned and I’ve never witnessed a game of it being played. Why should we care?

As near as I can figure, Oathbreaker did this because Terferi is disgusting in that format. I don’t know which delightful Canadian with a name like Whackity Smackelberry is responsible for this format or who keeps the banlist updated but for now, Teferi is teferrorizing people. I don’t know much but I know if it can make a card like this double, maybe other ‘walkers have some upside and maybe some signature spells do, too. Certainly Chain Veil combo is easier in a deck that starts the game with 51 cards in it when you’re a Blue deck whose signature spell could very well be Fabricate.

Is there anything else we can look at for potential?

This would be kind of funny and kind of brutal. Since the games are multiplayer, you need to do this trick more than once, probably, but it’s still pretty brutal and you can cough up the mana to recast Tunnel Vision for.. 8 mana? Jesus, OK. Still, Blue is good and Tunnel Vision… already went up? How did no one notice this?

The timing is too coincidental not to be related to Oathbreaker.

I think there is room for Tunnel Vision to go up, though. It’s the same rarity as Doubling Season and has fewer printings. Just ‘saying. It’s an $8 foil, also. I think that’s easy money on easy mode. I think this is a $30 foil waiting to happen.

New Narset is gnarly and nasty and this seems like a great way to slam Day’s Undoing, Windfall, Teferi’s Puzzle Box and other goodies in a deck where you draw your win conditions and they go down from a 3 mana Identity Crisis harder than Tim Drake’s Dad.

Despite hella printings, this is the only foil version of this card. Is Oathbreaker going to be a thing (I would say no, but look at Tunnel Vision) and if it is, will people who bought Windfall foils get a windfall of their own? Is there a chance they go up for some other reason? Is there a chance Windfall is in Modern Horizons? (nope). I think there is money to be made here, poisonally. But I like my blue foil cards ever since I said $1 was too cheap for Dramatic Reversal.

This has nothing to do with Oathbreaker, but checking in on Dramatic Reversal makes me want to check in on another card I feel just as strongly about – Arcane Denial. The art sucks but it’s in a lot of EDH decks and there is one foil printing. Denial is still under $4, up from the $1- $2 where I called it, but with potential to get to… $11 apparently. Just get that free money. There are enough copies for all of you Pro Traders with enough left over for me to actually buy some since I only bought like 4 Dramatic Reversal because I get squeamish about buying specs I write about. I give you the good stuff and leave myself with… well, collections which have a guaranteed return and are much more stable than specs. Still, though. Coulda dectupled up. You’re welcome. Lol, that’s a callback to earlier but it sounds pretty aggressive. I’m leaving it.

There is an entire Oathbreaker subreddit but it’s really tough to figure out what is durdly and what is concensus good. The subreddit is extremely hard to parse, there are no even results anywhere and EDHREC isn’t compiling Oathbreaker stuff (I’m not sure we should, BrawlREC was a lot of work, no one went to it and now Brawl seems dead). If anything else around this format pops up, I’ll let you all know, but for now, it seems like Blue tryhard cards are the best bets and most of them were already good. A few signature spells I have seen that aren’t good in EDH were

Sorin’s Vengeance with Sorin Markov, and

Inspiring Call with Jiang Yanggu. Will any of this pan out? I don’t know. I feel good about all of that blue stuff I said earlier, and I’ll give Pro Traders a crack at Tunnel Vision before I think about if I should buy some. I probably won’t but only because it would look bad if I did. Until next time!

2 thoughts on “Unlocked Pro Trader: I Think About Oathbreaker So You Don’t Have To”