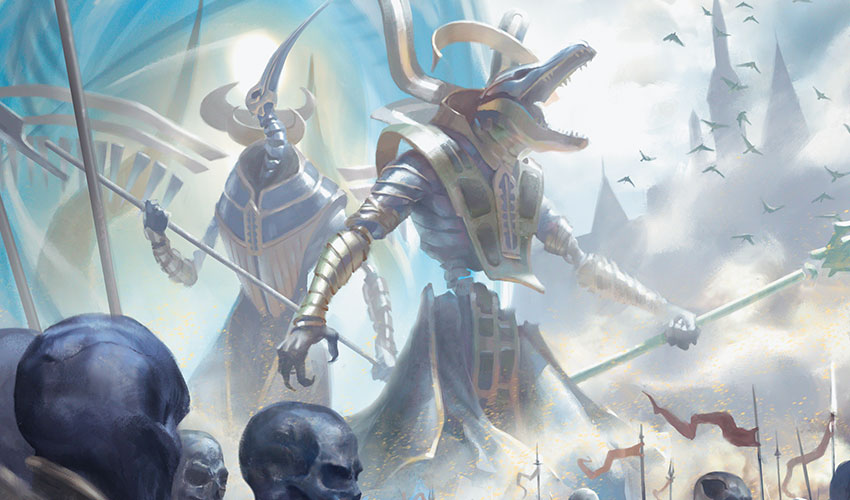 We’ve had War of the Spark in our hands for a couple of weeks, and while a lot of attention is rightfully on the ME3 fiasco, uncut apology sheets, and alternate art, we would be remiss not to take a look at what is making waves in assorted formats.

Unbelievably, we start Modern Horizons spoilers on Sunday, so prepare for two weeks of absolute madness and rushing to buy things before other people realize what’s going on.

Just so we’re clear: I don’t want you to get caught up in buying hype. It’s very difficult to buy a card while it’s in the process of spiking and still make money on the transaction. If you find some cards at your LGS before they can catch up, that’s fine, but the Internet is about to become a wild-ass place with each previewed Modern Horizons card.

Your best bet is to stock up on staples of Modern now, and make sure your collection is organized enough that you can raid it as needed.

Teferi’s newest incarnation has been just the super-irritating thing that a lot of control decks want: an early way to ensure they get to do what they want. It breaks the mirror open quite well, and has a great game against Nexus of Fate decks, which aspire to abuse the end step.

The price is on the rise from his low of $9, but considering that the price at the start of the format was $20, there’s a lot of room left for him to move. I’m definitely going to want to have some of these before they go back up to $20.

Someone else with a whole bunch of cards named after him, Nicol Bolas’s (hopefully-but-I-doubt-it) final form is tough on the mana but is awesome on the field. His price is going down, though there’s a Grixis control deck that’s stubbornly playing the full four copies. The choices are many for the other planeswalkers you can have in play, and you get to pick the flavor(s) that you like best.

The ‘have all the abilities’ clause is pretty amazing. Note that he’s currently legal with Jace, Cunning Castaway, so if you really want to go hog wild, you have my blessing. The Commander demand would be higher if he could fit into Atraxa Superfriends decks, but really, there’s a lot of ways to tackle this. The price of the Dragon-God ought to stabilize right around $20, so no buying quite yet unless you want to play the deck a bunch.

That deck is also playing four copies of the M19 version, Nicol Bolas, the Ravager, and with that card hitting $35 you need to sell, sell, sell. I even went so far as to take copies out of Commander decks and ship them off. At worst, I’ll rebuy them in October (at rotation) for $15-$20 ish, and have an extra $20 in store credit per copy.

Given that there’s an infinite combo in Standard with Ral, Expansion // Explosion, and some other spell, you’d think this would be higher. Problem is, countermagic is everywhere, and if you’re not playing Negate or Dovin’s Veto, you’re likely playing a red or white aggro decks and killing the poor durdler.

I’ve got Ral pegged as someone to buy once we’re all buying Modern Horizons. Ideally, I can get in under $2 and just be patient. At a price that low, I don’t need him to win games on stream (nice as that would be) because I’m very unlikely to lose out. Almost no planeswalkers are $1, but that doesn’t account for their presence at rare and uncommon.

I think this is going to be one of the first new cards in Oathbreaker to get banned, as Narset + Windfall (or some variation thereof) is disgusting. Leovold is extremely powerful in Legacy, and now we have this easier-to-cast version!

Narset’s price has gone crazy in these two weeks, as Modern and Legacy and Cube and Commander players try her out and find that it’s just plain silly. Spirit of the Labyrinth is symmetrical and that’s why it’s not busted. Narset plainly is, and is even in the color with the most versions of a ‘we all draw’ effect.

You can imagine that I’m trying very hard to build some form of Narset/Notion Thief deck, playing all the Vision Skeins. Heck, in Standard, we have Emergency Powers and that’s super tasty indeed.

You may or may not have seen it, but two weeks ago, the first streamed SCG Open had two Bant Aggro decks, nearly the same 75 but both with three copies of this card. Oketra is pretty bonkers, even one more creature gives you an extra 4/4 and that tussles with just about everything in the format currently. For extra spice, pair with Vivien, Champion of the Wilds and get bananas at instant speed.

It’s hard to feel like this isn’t a buy right now, but I’m being patient. Yes, it’s $2 more than it was a couple of weeks ago, but it’s an all-star in Commander and if you made me choose between this and Lyra Dawnbringer at the five-spot for White Weenie decks…I don’t know where I’d land.

One more good on-camera performance and this is a $20 card. The casual market is soaking up spare copies and preventing a lot of them from going into the greater market, a force we can’t quantify but we can notice by observing how the price doesn’t go down.