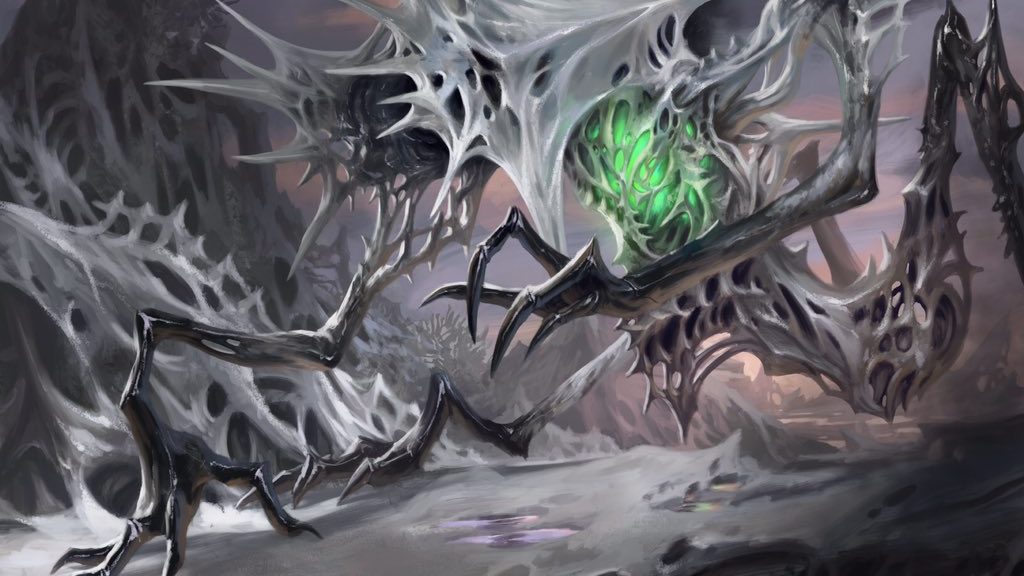 The answer’s fairly obvious, right? You all saw how poorly designed the question was right up top and while the question was fudged to ignore a few smaller factors, it doesn’t matter because it ignores a gigantic one. “Basically played in one deck” is not a great answer when it comes to Commander if that one deck is Atraxa. Every smaller factor you can list for why Engine taps to print money and Liege doesn’t is dwarfed by one single fundamental truth of the format, a truth we don’t always consciously include in our calculus, but should. You can’t compare a card only in Atraxa to a card only in something like Edgar Markov or Estrid for an obvious reason – Not All Commanders Are Created Equal.

When a new set is released, I’ve been looking at the cards that will impact the new decks and have some upside based on the new reality, and while it’s important to know that information, it’s important to weigh that information against the relative impact of the deck. If 100% of 30 decks play a card, it seems strong, but it won’t have anywhere near as much impact as a card run in 5% of 10,000 decks. I keep getting back to what I keep stressing about EDHREC data, and that is that it’s better to use the numbers qualitatively than quantitatively. “It’s in 10,000 decks” is sort of meaningless versus “It’s in 3 times as many decks as a card that went from $5 to $8 over the same period” and I’m trying to tailor the information I give you in my articles to more closely resemble the second.

We might as well look at Atraxa, then, if we’re going to talk about its relative impact on the format, because I used Atraxa as an example for a reason.

It’s in the top 21 decks of the week years after it was printed and during a week when people are going to be excitedly building new stuff. Now, some of these inclusions are people updating their old Atraxa deck, but all we can do is assume that happens for all popular decks and that new cards making a deck exciting again will have some sort of effect on the price. This impossibility to determine if a new hit in the database is from an updated deck or a new one. It’s curious that of all the criticism I have seen leveled at the use of EDHREC data, this is perhaps the most valid and I don’t see anyone espousing it but me. I also don’t think you can overstate the impact of a deck if it’s popular enough that people keep updating it, because they’re keeping the deck together in that case. If someone registers a deck and sells all of the cards, the impact of THOSE cards in EDHREC data are overvalued because the cards are back in the market, so, if anything, decks that are updated more are still together and therefore the cards accounted for. The older a commander gets, the greater the liability that the deck was scrapped, but it’s less so for popular ones. Is Atraxa popular? Well, it was printed a long time ago and is in the top 20 for the week…

And it’s #1 for the past two years. I’m glad we aren’t going back farther than that, really, because, like we concluded just now, it’s hard to trust that data. With all of these commanders (excepting Oloro, which I imagine is in the top 30 or 40), these all made the Top 21 this week despite Kykar, Omnath, Kethis, Golos, Kaalia and Yarok all coming out. These commander are getting new cards and the decks are staying together, or being rebuilt to accommodate the new hotness. Either way, it’s impossible to argue that Atraxa isn’t the most important deck.

We could talk about Golos and Omnath like they’re equal, but they’re really not and once the decks start to pull away from each other a bit, it’s important to analyze the decks next to each other. When I tackle sets from now one, I’ll look at what goes in each deck as they’re spoiled but on a week like this, after the first GP of the set’s legality with box sales going gangbusters and people buying cards like crazy, we’ll weigh the decks against each other. If Atraxa=x, what is the value of y? And which commander is y? Well, funny enough, y is Yarok.

Remember that scene in Searching for Bobby Fisher when Ben Kingsley got all pissed off at that 8 year old kid and knocked all of the chess pieces off of the board so the kid could concentrate because I guess the 90s were a weird time when you could threaten young boys? Anyway, I’m doing that but I’m not charging your parents $100 an hour.

Here’s the stuff that’s in the last two sets.

It’s clear Yarok is quite popular and with the linearity we talked about last time, I think Yarok could impact cards on an Atraxaesque scale, but y will never equal x. In fact, right now, y=0.058x. That’s… low. But what about for just this week? This week, y=3.07x. I expect that unless we get a more popular commander in these value colors, the equation will begin to balance a bit.

When you’re measuring the impact of new decks, why not see how they look relative to one another? It’s simple to do and it could be quite instructive. Setting Yarok as the baseline, let’s look at the rest of the MH1 and 2020 Commanders this week.

Only 2 decks had above half of the number of decks Yarok put up and 3 had fewer than a third. It’s important to know what goes in new decks, but if Yarok is 3 times as popular as Sisay, we need to know that, too.

One factor that confounds a measure like this is, well, us. If a card is obvious in Morophon, we’re going to buy a lot of copies because anyone who needs them for Morophon has to buy them and the price is going to go up. At least early on, anything that goes in a new deck has the potential to go up. We’re buying copies and selling copies and that attention affects values. However, the cards from the decks in green are still better buys because the more organic demand there is, the less likely you’re going to be to be punished for making bad buys like a donkey. Golos is a surprise, here, and I wouldn’t have guessed it. Omnath being this low is a surprise, too. This is only one week worth of data, but it’s also what we have.

You know how I know Yarok is good? It’s #1 for the last month, ahead of decks that have been out longer.

You want picks to go with your analysis, I’m sure, so let’s wrap this thesis up in a bow and move on to that, I guess.

It’s important to weigh the impact of cards so that we’re not trying to compare two cards that will never have equal impact. This is why everything from Kaladesh block is so expensive – artifacts can go in all kinds of decks and colored spells, especially multicolored spells can’t. Again, this seems obvious, but it’s not a factor we often consider. Chromatic Lantern may not end the game when you can it the way Insurrection does, but it goes in a lot more decks and that’s why it shrugs off reprints. Expect me to weigh decks against each other a lot more often moving forward. I may have talked about Omnath and Yarok on equal terms in the past but it’s pretty clear one of them is running away with the lead and one of them didn’t crack the top 20 for the month.

Instead of reiterating more picks from Yarok that you already know or could find yourself, I’ll give you some really hot tips and mention cards people aren’t necessarily playing in Yarok now but really should be and might start playing once someone makes a video or article highlighting them. That person won’t be me, but imagine if someone played this card in a Yarok deck on Game Knights. These are picks currently unsubstantiated with data but which work excellently in Yarok and have a ton of upside if they catch on yet no one is talking about them now.

This is already at an all-time high, basically on principle, and it’s got a lot more upside if people realize how stupid it is with Yarok. It’s a permanent you control, it’s triggered by a permanent entering the battlefield, and Yarok makes it trigger twice. Every time they put a creature card (not token, but, still) into play, they return two lands. This is brutal. Yarok decks probably play Muldrotha and Eternal Witness so go on and bounce those two lands to Rec Sage this and watch me run it back. People are building Yarok around doubling the ETB effects they trigger themselves and that’s only half of the design space.

This does NOT say creature card, it says creature. Doubling this effect is going to wreck people, and bury token decks. Heck, this effect without doubling is dumb.

Coolstuff 8, ABU 10, Card Kingdom 8. This doesn’t stay $5 on TCG Player for long. This is a $10-$15 card any day now. It doesn’t hit all players but you get to pick someone to get hosed or you can just make every creature a Mulldrifter, which is especially hot if it’s a Man-O-War or Snapcaster.

Not as strong an effect but it’s a penny stock for sure and doubling the trigger is pretty formidable.

I’m testing all of this nonsense in Yarok, even though some of it hurts me. I can always bounce or flicker Yarok and cast a bunch of spells without getting double dinged, or I could just steal their creatures and beat them with them. People can’t play Storm or tokens through these cards and fair decks are vulnerable to you stealing their stuff. I expect some of this tech to show up and if it doesn’t, we still have the Yarok page for inspiration.

That does it for me, thanks for reading. Until next time!

2 thoughts on “Unlocked Pro Trader: Not All Commanders Are Created Equal”