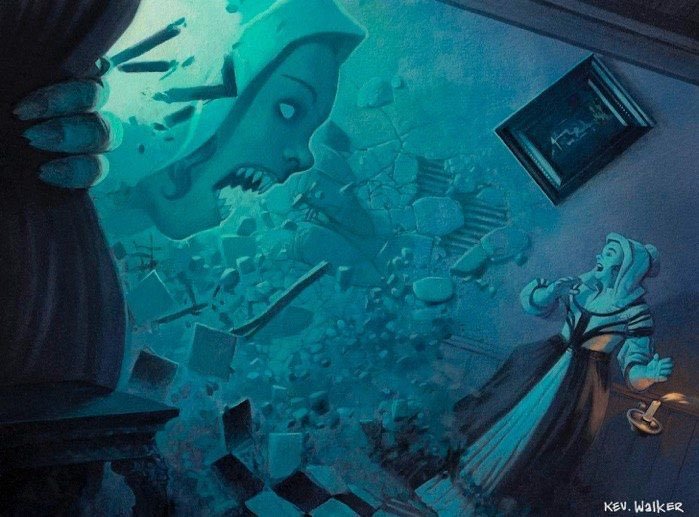 True confession time: I used to get cards signed all the time. I also used to write on my cards when I felt the occasion called for it.

I remember getting some cards signed sometime in the early 2000’s, but that was a couple of sellouts ago for me. The real motivation hit when my local store brought in a real Magic artist, Thomas Baxa, in about 2010. All of a sudden, I had to have everything by this artist and everything that artist ever made signed by that artist so I could Show My True Devotion, or something like that.

Peak signage for me was 2011, the last Worlds ever held, when I brought about 150 cards to get signed by a stack of different artists. I remember getting in line, a ChannelFireball pro got in behind me, and they had something like 300 cards. A playset of everything this person had ever painted.

And then it hit me. Why was I doing this? What was the point? I didn’t feel a special connection, I was trying to show off for people.

It’s the same spirit behind foiling out the entirety of a Commander deck, only foils are a good investment and signed cards are definitely not.

Let’s talk about value, shall we?

One thing that MagicFests offer (enjoy Vegas, everyone!) that nothing else does is the chance to interact with people in person who are involved in Magic in a host of different ways. Cosplayers are creative and handy, dedicated and then some. Designers revel in the sight of people enjoying the products they worked so hard to create. Artists get to hear from fans, and even purchase items to support that artist.

However, there’s a true cost to being an artist at a MagicFest. You’ve had a taste of this, if you go play in a main event you can’t do the side events or casual Commander games. If you go there to Cube Draft you won’t have time to join the big Sealed queues.

I’m not sure how many artists play Magic, but I do know that almost none get to play it at the actual MagicFest. They are too busy signing and altering and painting, the activity that is their lifeblood.

I’ll let Noah Bradley, someone who paints a prodigious amount of cards, makes a good living from it, explain why he’s got signing fees.

Pay the signing fees. Unsleeve your cards first. Buy some art. Respect the time you’re taking, and recognize that you’re downgrading your cards to HP, and even Damaged in some cases.

Some signatures are worth a lot, for the macabre reason of death or because they don’t do a lot of signings. Christopher Rush, the painter of iconic things like Black Lotus and Lightning Bolt, has had his signature forged more than a few times in an attempt to maximize value.

John Avon’s health issues make events difficult for him, and as eBay shows us, that’s a valuable signature indeed.

One of the paradoxes is that the more an artist signs, the less the signature improves the value. Some artists travel every weekend, putting the effort in so that the grind is profitable. It’s an enormous amount of work, though. If you’ve hauled a box of Commander decks, two trade binders, some decks in other formats, a water bottle, a draft kit, and whatever else is in your Magic bag around all day, imagine carting around what artists bring.

Getting your card signed is going to hurt the value. You might find someone else who says ‘Whoa, that’s neat! Signed? Yeah, I’ll trade for that!’ but you’re more likely to hear ‘Sorry, gotta buy this at HP from you. It’s tough to sell.’ Please keep that in mind, especially if you’re getting lots of things signed.

I’ve been researching signatures and value, and since signed cards are so rarely listed on TCG and the like, actual data tends to be restricted to eBay’s completed auctions for the category.

If you find the right buyer/trade partner, then you’ve got a possibility of making a big jump in value.

Altered cards are another area where you’d better be spending for your own joy, and not the accumulation of value. Getting a high-quality alter done by the likes of Eric Klug, Juju Alters, or Steve Argyle is going to cost you a LOT of money but you’ll have a one-of-a-kind piece. There’s no guarantee that it’ll be able to resell at that value, should you ever wish to let it go.

For what it’s worth, I don’t own any alters. I’ve come pretty much full circle at this point in my Magic career: I appreciate the novelty of foreign-language cards, the beauty of an alter, the shiny glory of a fully-foiled deck, but for cards I play with, none of that’s a requirement, just a bonus.

Also, and I say this as someone who has made some very NSFW custom proxies: let’s move past needing to have barely-covered people on your cards. If that’s what you enjoy, great, leave it at home. There’s no reason to subject a whole playgroup to your desires. I wish I’d become a grownup about this sooner.

Bonus Prediction: Hogaak does not get banned. Vengevine maybe, or Stitcher’s Supplier. Something else that helps the deck but I think Wizards is going to tiptoe around Hogaak one more time, as they did with Bridge from Below.