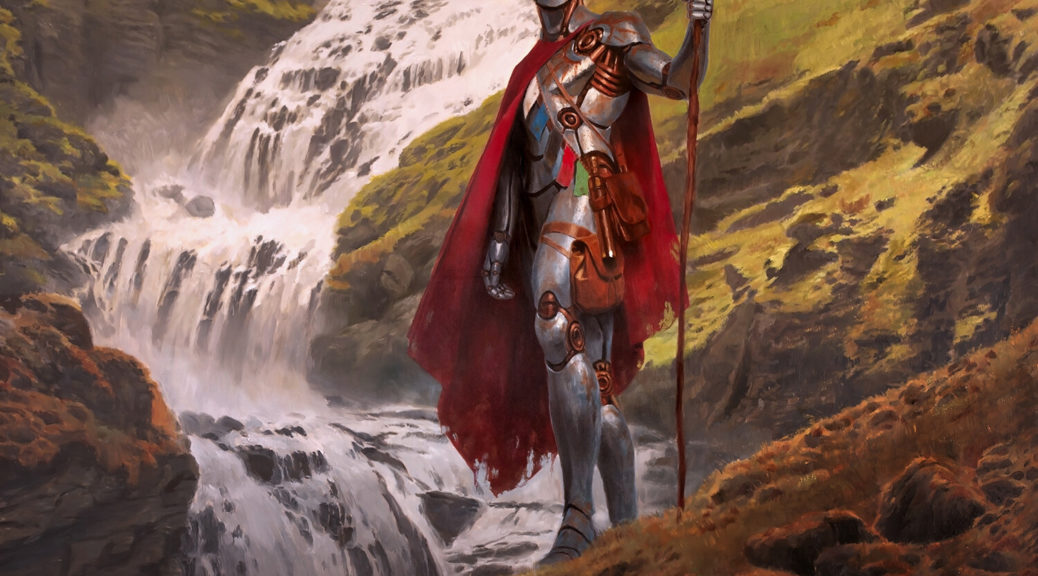 Since we’re getting a Mythic Championship in a couple of weeks, and we’re all enjoying Throne of Eldraine, it’s time for the unglamorous task of looking at the other sets in Standard for things that are undervalued yet could see some life before they rotate in twelve months.

The traditional play right now is to just look at Core Set 2020, but honestly, there’s a couple of cards that are too tempting not to mention right away.

I’ve been playing the Golos Field deck on Arena, and while I love having Ethereal Procession in the wishboard, what I’ve been reaching for more often is Divine Visitation. You’ll notice that all three vendors in the graph above have ticked up their price a little lately, and this is why. It is a total backbreaker of a card, requiring a Planar Cleansing in response.

It’s also a fantastic casual card, and yes, that foil price is right. You can get some foils on TCG for 1.5x the normal price, which is absurd for a token-centric mythic. I like this as a short-term spec and for the long term, as it’s golden in so many different Commander decks.

Another card with super-low foils, we’re about to see this one blow open the mirror match in Standard. The appeal of Agent is that it’s castable off of a Golos activation (unlike Mass Manipulation), and is going to be great no matter who you’re against. Steal their best creature, snag a planeswalker, or annex their Field of the Dead. It’s all wonderful and three copies is the standard for now.

This was $1 a couple of weeks ago and it’s not done climbing. It’ll hit $5 once Golos is all over the place at the Mythic Championship. Get your copies at $2 now, and flip them for $4 worth of buylist credit in a couple of weeks. I’m not as stoked about the foils here, but the multiplier is so low I might not be able to help myself.

I do hate that instead of two prices, every card in Eldraine has four. It’s going to take a lot of getting used to.

If you haven’t read James’s excellent analysis of the drop rate for Eldraine’s unusual borders, do it now. And then go buy yourself some alternate-frame foils. Right now they are dropping fast as people feverishly crack Collector Booster boxes, and that’s not the play you want to make. Just buy the singles! You can snag this mythic Showcase foil for the price of a Collector Booster.

There’s lots of other prices that I like, but the alt-art mythics especially call to me. Brazen Borrower in Showcase foil for ~$70 is very appealing as well as The Great Henge at $150. Read his article again, everyone. There’s a lot more people who desire shiny new things than there will be copies of these shiny new things.

I admit, this is win-more, but I’ve been playing around with this in Golos as well and it’s a very good time. As a bulk mythic, your expectations are low but the potential for profit is high.

The Cavalcade of Calamity/Torbran, Thane of Red Fell deck is real. Chandra offers two hasty 1/1’s for three mana, and that’s a card you’d play in this deck no matter what. Being able to re-use a burn spell from earlier is just gravy. If the red decks have a good showing on camera these next couple of weeks, she’ll go up. If the deck wins it all, or even looks intimidating in the Top 8, she’s a good bet to double her retail price temporarily, and that’s when you’ll need to mash that SELL button pretty hard.

Currently the eighth most valuable card in Core Set 2020 is this uncommon, because it’s in most Standard sideboards, a lot of Modern sideboards, and a few Legacy sideboards. That’s a whole lot to ask, and if this card wasn’t costed so aggressively, this wouldn’t be an issue.Just about half the decks in Standard have at least one copy in the 75, one deck in eight has copies if you’re in Legacy, and a little over 10% of Modern decks do the same. That’s an enormous amount of reach for a card released four months ago.

I’m worried that there is going to be a special version of this card sometime soon. It used to be that the FNM card was an uncommon from a recent set, not just the set that’s currently being drafted. That’s no longer the case, and frankly, we’re going to need more copies of this. The graph is clear, and we stopped opening Core Set 2020 three weeks ago:

I wish I could say what the entrance and exit could be on this card. It could have three copies in the next set of preconstructed Standard decks. It could be a judge foil early next year. It might even be in the MYSTERY BOOSTERS that we’re going to see in Richmond this November.

If it’s not reprinted, it’ll be $10 by Valentine’s Day. Too many decks need it, and it’s good against enough of the field that we might see something so weird as an uncommon being the most expensive card in a modern-day set. That’s happened before (Alliances’ Force of Will, and likely Mana Drain was the priciest card in Legends for a little while) but it hasn’t happened in a long long time. If Veil becomes the #2 card, behind Big Chandra, it’ll be $8 but I don’t think vendors will crack boxes just to get the cards. It’s pretty common to open a box of a set and not even get a whole playset of a specific uncommon.

If you think it’s safe, now’s the time to buy. The demand is real and it’s not going away. If you’re like me and you’re wary of the many reprint opportunities, keep your playset and avoid extras.