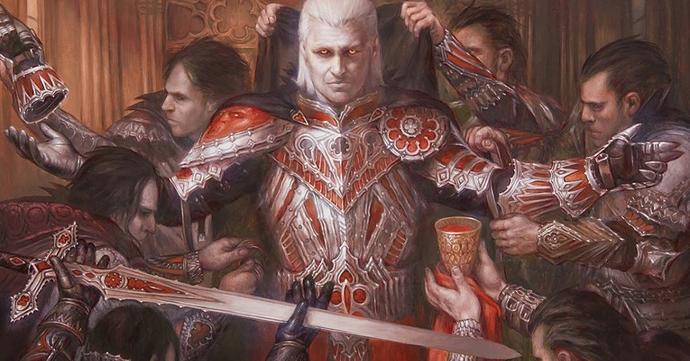 When a commander from years back starts making moves, it’s important to look at why. Why do I bring this up?

…A commander from years back started making moves. It’s not always clear whether the new decks registered are new decks or if they showed back up in the system because new cards made people update their lists, but it is worth it to look at what the new decks look like. New cards that make people update their lists could potentially illuminate new cards that weren’t in the deck before and help us predict two price increases for the price of one. A few new decks registered is a blip, but enough to make it to the front page? That’s significant, and we like to look at things that are significant.

Can you tell from the picture? I could be talking about either Edgar Markov or Muldrotha, but today I want to talk about Edgar because it’s less of a “goodstuff” deck and more of a “these specific cards are clearly for this specific deck” and the effect of just that one commander will be more pronounced. Will it be enough to drive prices? Well, that’s what we’re here to determine.

These new cards from the Brawl decks and Throne of Eldraine were good enough to make people head to Archidekt or Deckstats and update their lists. It’s possible it also led to the creation of some new decks, but, either way, it’s worth discussing. Any of these cards alone probably warrant an update and considering Edgar is the 3rd most-built commander of the last 2 years, even a small percentage of people updating leads to a noticeable blip on the radar. So the real question becomes, is this merely an update or do any of these cards change the way the deck plays?

The Way The Deck Plays

Not all of you play or even fully understand EDH and that’s fine. It’s my job to pay attention to that stuff, after all. I have you covered for the most part, but EDHREC does some work for you, too.

You may have seen me mention the filters in the top left by the card portrait on that card’s page. Those filters have titles that are in and of themselves informative. Don’t know how Edgar is built? Let’s check the filters.

That’s a ton of info. Vampire Tribal, Lifegain, Aristocrats (provided you know what that means), sacrifice, +1/+1 counters and Madness are all very self-explanatory.

The cards that are in the “new cards” list all deserve an individual look, so let’s do that.

Duh. This card is basically the new Sol Ring, this is getting added to most decks. This isn’t going to tell us anything.

This isn’t just getting added to the madness builds, and it makes sense. Anje is a 3-drop Vampire that draws cards. You rummage but you still see new cards. Is it changing the way people build? It might. To see if there are cards paired with it that could impact the non-Madness lists, let’s look at Anje’s page as a non-Commander deck inclusion and see if anything pops up there that could also translate because if one cards gets added, the others are likely to as well.

The high synergy cards are cards that get played alongside Anje in non-Anje decks. The Doomed Necromancer is basically the only interesting card here and it’s likely played in non-Edgar decks that include Anje.

Idol just seems vaguely good. Edgar makes mad tokens and this can draw a card for you, which is actually pretty insane on a 2 mana artifact. Edgar may be the best deck for idol, and that’s something we can check.

Nooottttt even close. While it’s obvious Ghired is going to be number 1 because Idol was in the same precon and the “precon effect” stipulates that cards that are in a precon tend to stay in if they’re marginally good enough because people tend to subtract from precons and not build up from 0. They get the precon, take “bad” cards out and add cards based on the number of slots they have left. However, Idol is overperforming in Alela decks. Remember, this list is sorted by the percentage of decks that could use Idol and do and since Idol is an artifact, any deck could use it. Therefore decks that are built more are statistically going to be higher on the list unless the card is under-represented. A lower percentage of Edgar decks are running it than other, less-built commanders which means it’s underachieving slightly. It’s still very good in the deck but not all Edgar players like cards like this since Edgar is more of a casual commander and, say, Kykar and Sai aren’t.

I think, though, that the decks running Idol are worth looking at. In this list, you have Alela which is #3 this week, Edgar which is #7, Kykar which is #14, and Atla Palani which was top 5 for its first 3 weeks.

Idol is not really at its highest point right now, but it is in the top 10 cards in Commander 2019 in terms of value. How about in terms of adoption? Well, EDHREC has a page for that, too.

Idol is 43rd, in 3% of eligible decks, wedged between Sanctum of Eternity and Wall of Stolen Identity, 2 cards I’m positive you’re not familiar with.

I think the facts that Idol is a token card that keeps your hand full, Alela just got printed and the Naya deck wasn’t very interesting and was likely underbought all point to Idol having some long-term upside. At its current price of under $3, this seems like a good pickup. There are a lot of copies but any future deck that makes tokens will want this and it’s very unlikely it’s ever reprinted. One thing to remember – we’re sorting by percentage, here, and Idol is eligible for basically every deck ever built but it only works in decks that produce tokens and even then it has a higher deck inclusion percentage than Anje Falkenrath does. If you go by sheer number of inclusions, a metric that also matters, only 5 cards in the set are played more – Dockside Extortionist (duh), Ohran Frostfang, K’rrik, Sanctum of Eternity and Bone Miser. I think Idol is a $5 card fairly easily. I don’t know if a mere double-up is good enough finance-wise, but if you trade with people, this is solid. $5 may not even be the ceiling – this draws cards in non-Green decks.

Similarly, this draws cards and in aggressive decks that can dump their hand, this is basically an Underworld Connections that you can tap for mana. I don’t see a lot of reasons not to play any of the castles in basically any EDH deck and the Green one can get pretty absurd. Not much to say here- this doesn’t activate any other cards.

This is an interesting inclusion. Not a lot of people seem to be aware of this card or how it works in go-wide strategies and if people are already adding a mana rock in the form of Arcane Signet, it may be hard to find room for this. The fact that people are doing it in enough numbers to show up is telling. It may be difficult to figure out if this is overachieving in Edgar decks. However, in the set in general, Arcane Signet is in 10 times as many decks as Banner but it’s only in 3 times as many Edgar decks, which seems to imply Banner is overincluded in Edgar decks about 3 times the average. With Edgar being the third-most-built deck of the past 2 years, that’s a lot of copies relative to other cards.

So besides Idol, which I am very bullish on, what else from Edgar decks could go up?

Captivamp is basically at its floor from when it was first reprinted in the precon. The thing about this card is that 60 card casual players love it and they buy 4 at a time. I don’t think this is ever $12 again but I also don’t think $4.50 is correct or that it gets reprinted again.

If you don’t like the shape of that graph, take a look at the price of the foil with Channel Fireball prices in orange instead of Card Kingdom in Pink.

The foil is barely more than the non-foil because it was in a dirt-cheap precon from that era to give players the vampires they needed to play with the ones from Zendikar. I don’t typically like casual foils, but Channel Fireball has the price at basically its historical peak. However slightly, the buy price is also increasing.

Take a look at Elenda the Dusk Rose while you’re at it – no one has that under $8 and Card Kingdom is currently charging $12.

That does it for me this week. I think even though people updating old lists doesn’t always translate to new copies of everything selling, we used the method to find cards we might not have found otherwise. Most people didn’t even know what Idol did but I think that was a gem and I wouldn’t have noticed Drana starting to dry up if we hadn’t drilled down here. You can develop your own methodology for checking EDHREC as long as you check it often. It updates daily and since the answers aren’t spoon-fed to you, you’re operating with knowledge not everyone has because you figured it out. Thanks for reading – until next time!