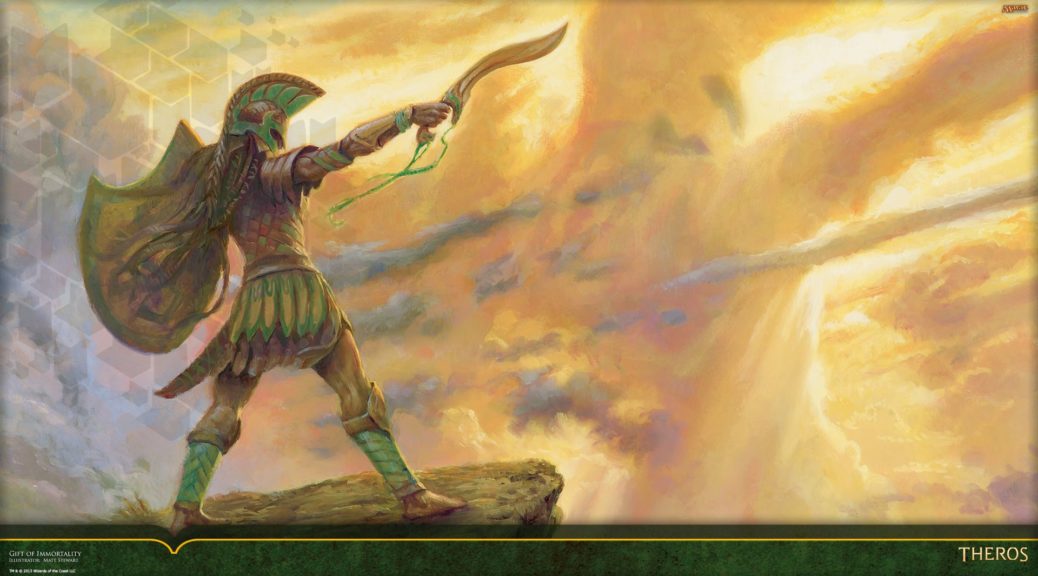 Spoiler season is reminding me a lot of this time last year, although the cards that are going nuts aren’t all EDH this time around. Last year we got a lot of data to use for scenarios like now where we have cards that are going to spike on the basis of potential interaction to compare to the two different kinds of spikes last year. I will call one kind of spike “Vannifar” and the other “Teysa” and we can look at what’s what. First, though, a few brief looks at what’s going on.

This card was spoiled, and it’s pretty good with this.

Until we had the reason for it spoiled today.

Escape is an interesting mechanic and devotion is also back. Could a card that puts cards in the graveyard and gives you a few pips be in play? Some say yes.

We could list a whole bunch of cards that combo with Thassa’s Oracle like Tainted Pact and Demonic Consultation, but since Laboratory Maniac was legal last week, I don’t think those prices stick. Today, we’re going to talk about Vannifar, Teysa, and stickiness.

Last year, everyone in the finance world was going nuts for Vannifar specs. Intruder Alarm, Thornbite Staff, you name it. After all, it was a pod chain that could tear through the deck and get you all the way up to Craterhoof (my favorite is Avenger of Zendikar into Craterhoof) and get there quickly. It’s easier to deal 20 damage like that than it is 60 damage, though, and you could tell who played a lot of 60 card Magic and who played a lot of 100 card Magic. I waded into the Vannifar stuff but noted it was more cEDH players hyped for Vannifar and wasn’t sure it would be the most popular commander of the set. It wasn’t.

Nor is it close. Vannifar is currently, a year on, ranked 4th after Lavinia, a commander that BARELY does what it actually is supposed to do in EDH. It makes mana rocks worse, though, and if you want to ‘Geddon people on a casual format, cool? Still, Vannifar is underperforming a bit, so why don’t we revisit the specs from that deck a year on and compare them to the ones from Teysa?

This is what Vannifar did to Intruder Alarm then.

Even with cards that pair well with Alarm printed since, it’s down to about halfway between its pre-spike and post-spike price, which is unfortunately what happens to cards that have lowish stock and decent play in other decks. Cards that are unused by other decks have problems, too, because they got from one dollar to unsutainable numbers like $10, but this was around $10 and that’s what it is on TCG Player, now, so while you had time in the short term to make money, I prefer cards that keep their value. Something with a lot more stock may behave differently, so let’s look at something like that.

Thorny WAS looking like the poster child for “Vannifar” specs – cards that crash after the deck is less popular than we thought, but it spiked again later for an unrelated reason so it threw us off. You might assume it maintained its value if we didn’t have a graph of historical prices to note the shape of – this went down and back up.

Wamp wommmmmp. You know what sounds I’m making when I say that, right? Atla came along and threw off our data, but I’m sure Staff was going to end up halfway between pre- and post-spike, if not lower.

Our data can get thrown off the other way, too.

Yeah! Check out THAT decline! More like VanniFART amirite?

Keep digging, though, and you’ll find plenty of examples. Vannifar just couldn’t maintain the level of insanity that surrounded the initial feeding frenzy because it’s built 75% less than Teysa. Last year I wrote an article called “Karlov the Magnificent” and another called “Data > Not Data” that explored Teysa specs. Did they fare better in terms of sustainability a year on? Go read the article and pick out the cards I called in it so you can verify I’m not cherry-picking.

The latter article, Data > Not Data was one where I looked at cards that had a good ratio of inclusion rate and synergy rate which meant not only was it in a lot of Teysa decks, it was MOSTLY in Teysa decks. Those are the cards that would be pushed up by Terysa, and the cheaper cards could be more sustainable that way since Teysa is built 4 times as much as Vannifar.

Here is foil Pitless Plunderer a year on.

We can draw a couple of conclusions.

I think a lot of the spikes we’re seeing right now are very Vannifar. Ballista and Heliod is more for Pioneer. Oracle of Thassa isn’t great in EDH and the cards good with it are already known and already expensive, but I’m sure people will buy Paradigm Shift and the guy who messaged me to say “Paradigm Shift is one the Reserved List, should we buy it out because it’s on the Reserved List and hope it goes up someday” and I said “No” to is going to message me calling me an idiot for not being an oracle myself. Buy Tainted Pact? Don’t really, but maybe. If Tainted Pact goes up, I’m going to claim I called it. But don’t buy it. But if it goes up, remember I said to. But I’m saying not to. Unless you do, and if you do and it goes up, tweet that I called it.

That does it for me this week. Next week we’ll try to decide if Shielded by Faith is Teysa or Vannifar. I bet you can already guess what I think.