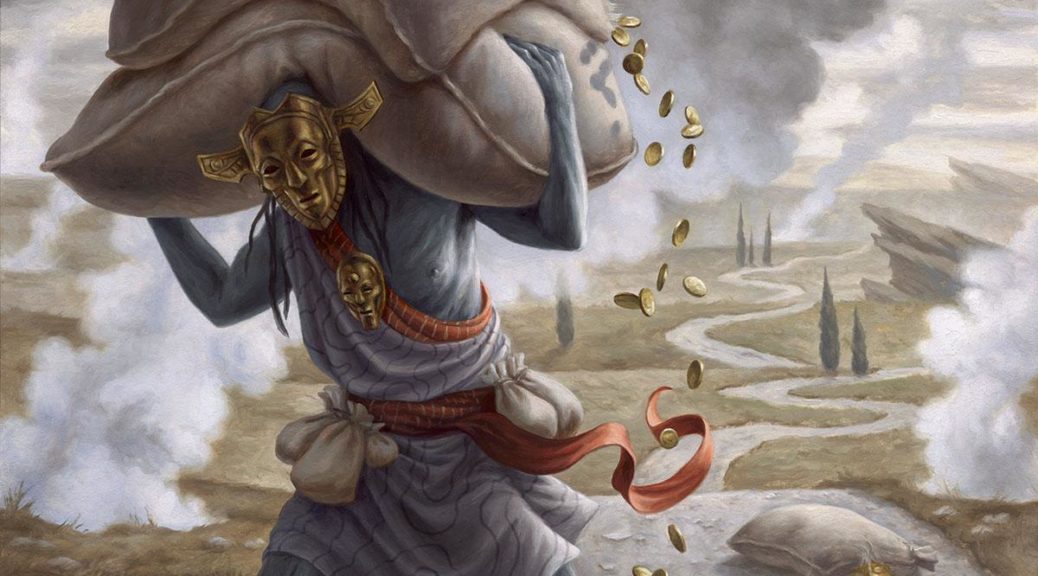 Theros Beyond Death is upon us, and despite the official set release not being for another four days, everyone is well underway trying out the new cards on Arena and MTGO. Now that we have sets coming out earlier on the online platforms than the paper release date, it’s more difficult for us as speculators to get in on the cards that perform well early on before they see a price spike, and that means that we need to be even more on our toes when it comes to evaluating and acquiring the new cards. With that said, I think there are a few cards from THB that are definitely worth paying close attention to.

The first card I want to take a look at is Klothys, God of Destiny. At first glance she already looks pretty decent – an indestructible enchantment that can make you mana or drain your opponent each turn, and if you get up to the required seven devotion she can start throwing hands. But once you start thinking about the play patterns that this card can enable, I think it’s even better than it seems. Albeit costing two more mana, she’s rather reminiscent of our old friend Deathrite Shaman – she can exile lands from graveyards to make mana, and given enough resources can provide a four point life swing every turn. I’d pay 3 mana just for an enchantment that did that, so the fact that there’s also an indestructible 4/5 body attached to it that can smash face later in the game is just pure upside.

The one caveat with Klothys is that there isn’t really an obvious existing shell for her to slot into. Despite this, I think she’s more than powerful enough to see play in any or all of Standard, Modern and Pioneer; she made the Arena Decklists top 10 list for Standard play and has been talked up by the Pioneer Cast too. She’d be great in an aggressive Gruul shell in Standard or Pioneer, and could possibly even find a home in Modern Jund, feeding on fetchlands and offsetting Dark Confidant triggers.

There are plenty of copies available at $10, and the gorgeous non-foil showcase version is only $15 too. If Klothys sees decent Standard play she’ll be a $15-20 mythic, and if we get a multi-format star then I don’t think $30 is at all unreasonable.

Eat to Extinction is comparable to Vraska’s Contempt from back in Ixalan; both 4 mana black spells that exile a creature or planeswalker at instant speed, with a bonus effect tacked on. The two life gained from Contempt helped shore the midrange and control decks up against what was a very strong mono-red deck in Standard at the time, enabling slower strategies to battle on in a field of aggro. Effectively surveilling one probably isn’t as strong as that, but does still provide some additional value for you, particularly if you’re looking to enable Escape cards.

Vraska’s contempt was selling for a touch under $5 on release of the set, but saw a quick climb up to $10 and even flirted with $20 at its peak in Standard. It’s not hard to see Eat to Extinction following a similar pattern, especially seeing as exiling rather than destroying is going to be more important than ever in this Standard format. With the Escape mechanic looking to do some serious work (Uro appears to be one of the best cards in the set) and multiple indestructible Gods running around, instant speed exile effects are going to be necessary and powerful. The fact that it hits planeswalkers too is important – even though Oko no longer holds his crown, Nissa and Teferi are still hugely prevalent in Standard, and having answers to them is a must.

For the first time since Nantuko Husk was reprinted in Magic Origins, Wizards have given us a free sacrifice outlet strapped to a creature in Standard. The premise of that effect is powerful in and of itself, but Woe Strider gives us a lot more on top of that. A 3/2 for three mana that brings along a 0/1 Goat is fine, but giving the card Escape as well and coming back as a 5/4 makes it a hard card to deal with. Not having to pay any mana or life in order to sacrifice creatures can make for a strong engine – so what can we combine it with to gain value off the ability?

Mono-black has already shown to be one of the early decks to beat in this new Standard format, and one of the breakout cards from the deck has been Nightmare Shepherd. Shepherd has already seen sharp price movement, but Woe Strider is still being figured out in these decks and so is lagging behind a bit. Pairing Nightmare Shepherd with Woe Strider and creatures that have enter-the-battlefield triggers like Ayara, First of Locthwain and the old devotion cornerstone Gray Merchant of Asphodel can quickly get out of hand, resulting in some, uh, Recurring Nightmares. If even that’s not enough for you though, try throwing a Bolas’s Citadel into the mix too. You can play your black creatures off the top of your library and use Woe Strider to scry away anything you don’t want, and it gives an extra three pips of devotion for your Gray Merchants, so you’ll only need two or three Gray Merchant triggers before your opponent is really rather dead.

I wouldn’t be expecting a huge spike on this one, but seeing as it’s currently only $1.50 I’d want to be buying a few and looking for a buylist out here – could be a nice double or triple-up.

A final bit of advice: when it comes to evaluating new cards, listen to the pros. Watch their streams and read their articles; they’re generally a lot better than financiers at evaluating whether or not a card will do well or find a home in a particular format.