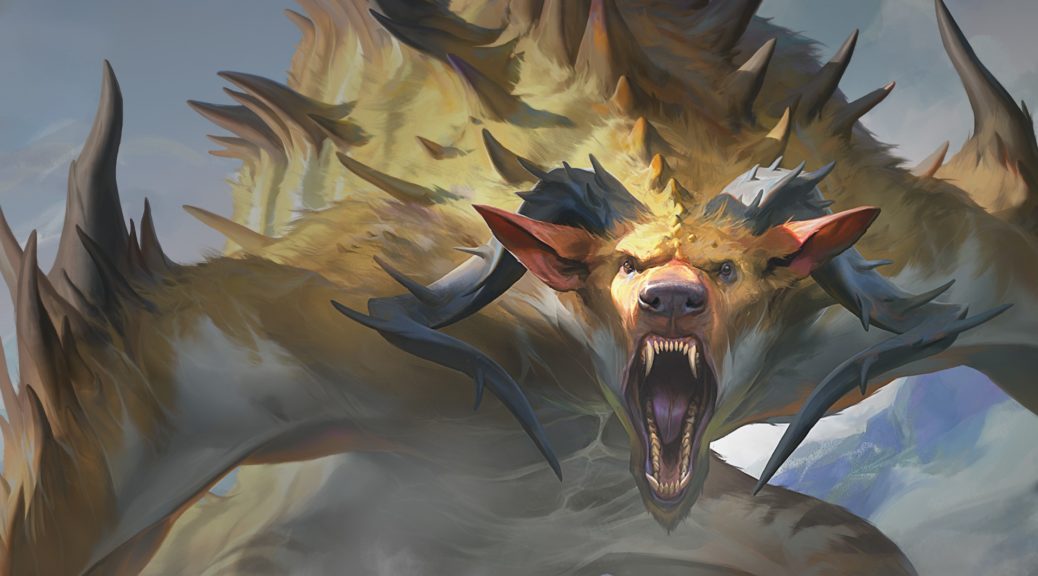 Ikoria: Lair of Behemoths has finally been previewed, and I’d like to take a moment to say thank you to Wizards for waiting until after April 1. If they had started on Mondays as usual, and then we’d seen Godzilla stuff, we might not have believed it.

I’m pretty over April Fools stuff, especially as most of the whole world is trying to stay safe from a worldwide pandemic, but that’s me shaking my fist at a cloud again.

Let’s dive into what we’ve been given with Ikoria, and where things might be going.

First of all, if you haven’t looked at it, take a moment and read the preview article. Then you should go see the Mechanics article.

The main thing from Mechanics is at the end: There’s going to be ten different Companions, cards that can exist outside of the game and can be cast from the Command zone as long as a condition is satisfied.

Those conditions are going to restrict deckbuilding, but also empower Commander decks to be 101 cards. Let’s all pause for the poor Elemental Otter, named Lutri, the Spellchaser, who has been preemptively banned from Commander games as it would be too universal and incur no cost, and always give a free card to those decks. Amazingly, this is the first time a card has been banned before its release. Not Griselbrand, not Worldfire, no other card has earned this distinction.

I do think these nine other cards are going to have a small amount of demand going forward. Having access to an additional Commander-type card is pretty great, and the ones that have been revealed are worthy effects. Lutri copied a spell, Keruga, the Macrosage makes you build with things that cost 3+ and then rewards you for exactly that. I can see a lot of UGx decks giving up on two-drops in order to have Keruga starting out ready to go alongside their commander.

We are getting one for each color pair, and the four revealed so far impose a lot of restriction on decks, but time will tell if that’s problematic. They are all capable of being Commanders on their own, or in the 99.

The much bigger deal is the Showcase versions we’re getting this time around. There’s two categories: 19 cards get a Godzilla treatment, and the common/uncommon cards with Mutate get a comic-book-like treatment. The Godzilla variants go down to uncommon this time, and having two different Showcase styles, plus the Extended Art, means a whole lot to keep track of.

For example, we’re getting three versions of the UB Companion, Gyruda, Doom of Depths:

I like that the Godzilla variants have a totally different name but then a reminder of the name there at the header, and even if this frame/art style isn’t your cup of tea, this is a crossover. Godzilla collectors are going to want this, as what happened with the My Little Pony set, which was offered for $50 but is now going for $75+.

Magic collectors and Godzilla collectors are going to intersect here, and on top of that, we’re going to be looking at a severely restricted market due to the virus’s impact on local stores and major online retailers.

There are going to be less copies in circulation, and weigh that against the lower number of people who are able to play. I can’t predict what that ratio will be exactly, but I do feel confident that the most premium versions of cards will command even higher multipliers than the previous Showcase versions.

Additionally, the Theros: Beyond Death gods were a bit underpowered. These are not. The mythics are demanding on a manabase, but holy wow. There’s a 3/5 double strike for four mana. There’s more than one 6/6 for five mana, one of them has flying! All of them can mutate onto/with other creatures and give bonuses when that happens.

Will all of this unseat the dominance of Ramp or the Mono-Red menace? Likely not right away, but I’ll be a big fan of picking these up at the end of Ikoria season in preparation for October’s rotation.

What I really want to buy right now is Ikoria sealed product. I wrote about the appeal of the Prerelease packs, especially early on when no one else has cards in hand, but the Collector Boosters ought to be highly sought after. The low prices on Theros Collector Booster boxes compared to Throne of Eldraine is simply a reflection of Theros’s relatively low power level. Ikoria has a stronger theme (two art styles, actually) and more powerful creatures. Buying the boxes and selling the pieces should be profitable early on, but again, a lot depends on the timing. If you’re getting the boxes in mid-to-late May, when the set has gone on for a while, the premiums won’t be as high.

The ratio of cards made didn’t change much from Theros Collector Boosters, according to the article, and that means the extended-art nonfoils are going to offer some impressive gains when they get adopted into some Constructed formats. These are my new favorite targets, as they tend to be a bit more in price but much much lower in number compared to originals or foils.

One more collector target, and one more link. Wizards sent this set off to the printers months ago, before the current pandemic conditions, and one of the special Godzilla versions was named with a ‘Death Corona.’

They’ve announced that these copies are in circulation, but as reprints happen, they will switch over to the Void Invader naming.

Macabre as it may be, the Death Corona cards are going to fetch higher prices than most other cards with misprints. Too many people will want one of these, and I’d expect the foils to really break the bank. You don’t have to agree, or think it’s appropriate, but the provenance and the cultural significance will make these a lot more sought after, and while we’ll never know exactly how many are out there, it’ll be a reduced number as they switch over. My hunch is that the first few cards will be super overpriced, and then will settle down some. If you’re someone that craves to own a Death Corona card, be a little patient so you don’t pay top dollar.