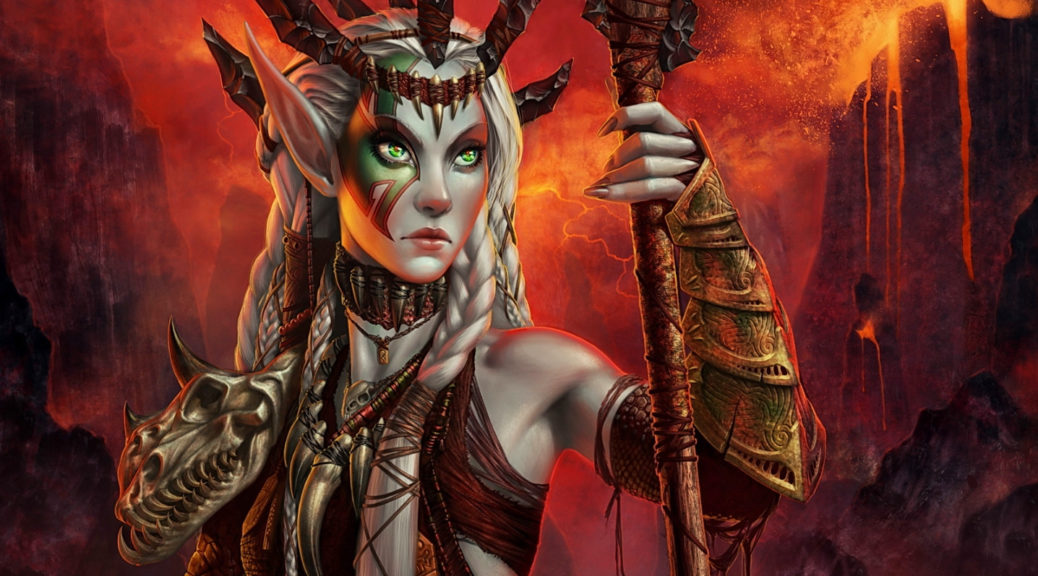 Despite the new UR Blitz deck (feat. Stormwing Entity) being the recent hotness in Modern the past couple of weeks, the other decks in the format are distinctly slower and more midrangey than that. The rest of the upper echelon of Modern is full of blue control decks, Jund, Eldrazi Tron et al, and so that’s what I’m going to be talking about today. I think Modern is in a pretty healthy spot right now, and should be set to continue that way until paper Magic returns to us.

I’ve called out the Triomes from Ikoria in general before now, but today I wanted to focus in on Ketria Triome in particular. It’s the second most popular of the five for EDH, but has also had the highest adoption into competitive constructed formats. Aside from being an obvious auto-include in Temur Reclamation in Standard, this triland has been showing up in Scapeshift lists in Modern.

Scapeshift has had its ebbs and flows from the forefront of the Modern metagame, but last night a Temur Scapeshift list took down a Modern event in the ManaTraders Tournament Series. It was a fairly straightforward list – Scapeshift, Uro and Growth Spiral backed up by Cryptic Command, Remand and Lightning Bolt. No Primeval Titans to be seen here, but an impressive 29 lands with a full playset of Ketria Triomes. The colour fixing coupled with the cycling ability makes these lands perfect for the deck, especially seeing as they can be grabbed with fetchlands.

Foil Showcase copies of this card can still be had as low as $24 on TCGPlayer, but the ramp up towards $40 isn’t too long at all for a card that was released three months ago. The obvious EDH pedigree coupled with its potential in Modern makes me think that this could be the best of the five Triomes, but I’m still a fan of the other four below $25 as well. $40 within 12 months should be reasonable here, and I’d keep an eye on the non-foils too.

RG Ponza used to be a deck that was joked and laughed about in Modern, trying desperately to Blood Moon and Stone Rain people out of the game, generally to little avail (unless they got paired against Tron I guess?). However, over the past year or so the deck has garnered a suite of new tools, and morphed from a deck focused around land destruction and mana denial into a proper midrange deck.

Modern Horizons gave us Seasoned Pyromancer, Throne of Eldraine gave us Bonecrusher Giant and Theros Beyond Death gave us Klothys, God of Destiny; and now the only land destruction spell they tend to play is Pillage, which doubles up on hitting artifacts too. Play patterns of Bloodbraid Elf cascading into Seasoned Pyromancer are all too common, and just that would put an on-board Klothys up to six devotion. Powerful stuff, and the results have been backing that up too.

Glorybringer has been a mainstay of the deck for a while now, being a powerful finisher that can double as multiple removal spells. Whilst regular versions are still in plentiful stock, the Game Day promos are running very thin on the ground. Only 15 vendors have NM copies on TCGPlayer, with a few copies still available under $10 but a sharp ramp after that. $15 on these should be easy very quickly, and I can see them moving towards $20-25 within 6-12 months. We may get a reprint of the regular copies, but I doubt we’ll be seeing these Game Day versions again, so pick them up whilst you still can – especially if you can see yourself playing with them in the future.

Some people may have thought that Snow decks would fade from the Modern metagame with the banning of Arcum’s Astrolabe, but that is far from the truth. Ice-Fang Coatl is still a very powerful card in the format, and Bant midrange/control decks are still doing very well with the tools they have left. The mana is slightly worse now, meaning that the decks have had to lean more into one or two colours (generally favouring blue), but the archetype is still doing well.

Azorius and Bant control shells playing a Stoneforge Mystic package have been quite popular over the past couple of weeks, and their counterspells of choice include Cryptic Command, Force of Negation and Archmage’s Charm. Most of these decks play between one and three Archmage’s Charms now, as it has turned out to be better than the ‘Cryptic Command Lite’ that it might have been viewed as at first. The counter and draw modes are nice, but being able to steal a Death’s Shadow or Monastery Swiftspear can do a lot of work too.

Modern Horizons foils in general have been draining since its release last year, and despite having gained somewhat of a reputation for being full of banned cards (see Hogaak, Arcum’s Astrolabe), the set still has a lot of great hits in it. There are only 17 NM foils listings for Archmage’s Charm on TCGPlayer (plus a few spicy Russian foils), and so it won’t take a lot of Modern players to move the needle on it. It’s also worth noting that the card is in over 3.5k EDH decks listed on EDHREC, so definitely not an insignificant number there.