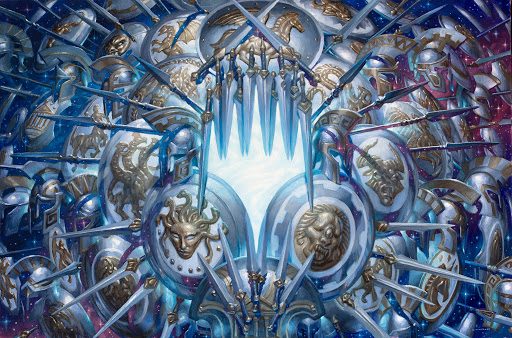 With Double Masters lighting up our world and about three weeks to go until Zendikar Rising previews, I want to take a breath and think about Mystery Booster cards. Not just the Convention playtest cards, since people have gone crazy on the high end of those, but the foils that barely had a chance to shine. Some of these are very nicely priced compared to their original, and price gaps are worth examining.

Scourge of the Throne ($9 for MB foil vs. $75 for Conspiracy foil) – I originally stumbled across this price gap when I was looking for a foil version of this card for my Ur-Dragon deck, and my jaw dropped. Sure, original Conspiracy was forever ago and this is a foil mythic from a tiny set, but my goodness. I respect anyone who wants to get the original, but I’m pretty content to pick up the new foil, and a few extras. There’s 100+ NM foils for the MB version, but less than ten for the foils from Conspiracy. I don’t think anyone will lower their CNS prices, for the record. Mythic dragons will always have my attention, especially in foil when there’s no EA to chase. One of the best pickups right now.

Minamo, School at Water’s Edge ($8 MBF vs. $70 for Champions of Kamigawa foil) – Seven thousand Commander decks, and that likely should be higher. It’s an almost-no-cost upgrade over an island to give your Commander vigilance when you want it, and is capable of a whole lot more. It’s not just a legendary permanent you control, you can give the gift of an untap when needed too. This is far too large a price gap to hold forever, and represent a wonderful long-term spec.

Karrthus, Tyrant of Jund ($13 for Double Masters foil vs. $45 for Alara Reborn foil) – It’s no $60 gap but it’s a big gap for a sweet sweet Dragon. Kaarthus’s price has come down a lot since the beginning of the year, but it’s still a notable gap. It’s nice to have the haste enabler, but stealing the Dragons at the table can be amazing game in Commander. For comparison’s sake, Maelstrom Nexus has a similar gap in foil, from $5 to $27.

Boreal Druid ($2 MBF vs. $22 Coldsnap foil) – Snow mana is a big deal, especially now that we have some awesome accessories for snow shenanigans in Commander. Having early snow mana means a lot, in the face of the Astrolabe ban it’s a winner in most decks. There’s a limited number of one-mana accelerators, and this shows up in a lot of cubes just for this reason. Herald of Leshrac, a rare from the same set, has a $1/$13 split, if you need a reference for how commonly Boreal Druid is used.

Intruder Alarm ($6 MBF vs. $60 8th edition foil) – I think the original Stronghold art is superior, but your choice is a binary one if you’re looking for a foil. The question is, do you want to combo off with a $50 price gap? This is especially appealing due to the combo implications. This tends to spike when sweet legends come out, or a new Commander combo is unlocked. Now you can get the cheapest version possible in the face of the next spike.

Reki, the History of Kamigawa ($3 MBF vs. $34 Saviors of Kamigawa) – Reki isn’t used extensively in Commander, but there are Legendary-themed decks that love this effect. I especially love cast triggers, and this is cheap enough to cast and then follow-up with a legend.

Gilder Bairn ($1 MBF vs. $20 for Shadowmoor) – This is only in about 1000 Commander decks online, but the effect is one of the only ways to double up on any permanent. A lot of effects since then won’t touch planeswalkers (Vorel of the Hull Clade) and that’s why this uncommon is $20. Remember that the Mystery Booster collation comes from whole sheets of 121 cards, so the Bairn is as likely to be in a pack as Scourge of the Throne. The printed rarity doesn’t matter: you’re getting one in every 121 packs (slightly over 5 boxes). Yes, there’s 100 copies on TCG right now, but we’re not opening any more Mystery Retail. Who wants to draft that when there’s Double Masters, or Zendikar 3, or some other set yet to be released?

Teferi’s Puzzle Box ($7 MBF vs. $200 7th foil vs. $34 8th foil vs. $63 9th foil) – Speaking of combo enablers, there’s been a lot of stuff that works really well with the Box, things like Nekusar, the Mindrazer. Every time, these get a little more pricey. The original in Visions can’t have a foil, and now you can buy in at the cheapest version. It’s also the most common one, but with only 137 vendors and none with a huge amount, there’s a lot of room to grow. It’s the same art as the 8th Edition foil, so that’s your price comparison.

Braid of Fire ($8 MBF vs. $40 Coldsnap foil) – Finally, let’s look at a card that spiked towards the end of last year and then came back down. Remember, when this came out, mana burn was a thing and you could suffer for having this. Now there’s no drawback, you just need someplace to put the mana. I have confidence in the abilities of Commander players to pull this off, especially with less vendors for this card than the others on this list when looking at TCG. The regular nonfoil is $11, and that’s all due to being in a weird third set that came out during a totally different block.