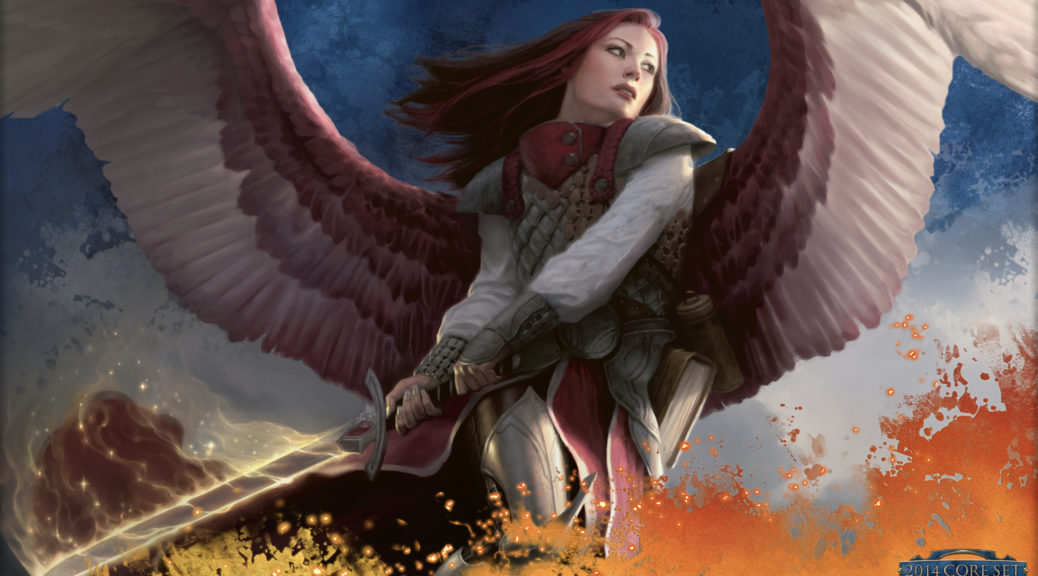 After looking at cards that will go in lots of decks, how about we talk about cards that will go in one deck? In order for that not to make a 1/3 as much sense as the articles I wrote the last two weeks, it would have to be a pretty popular deck, right? Well, luckily I have just the thing and I have some stats to back it up.

Omnath continues to get top billing in the set and that’s no big surprise, but Akiri came out of nowhere to swoop into second place last week and is still holding strong. Akiri is yet another Boros commander that makes combat slightly better, but Akiri is one of the better equipment commanders ever and while you won’t draw as many cards as in a Sram deck, you can play Sram and you can also have access to Red which gives you additional combat steps. What else does Red give us? We don’t have to guess – we have the data of what people are already playing!

I don’t know if this will be relevant financially at all for Gadrak. I would have said snap No if this were a normal set, but I feel like Core Sets get bought less and this Core Set, though it has good cards, was never drafted in paper and the supply was a little wonky. We could see Gadrak bump someday but it would probably need more help than just Akiri. I think we’re going to want to look at cards older than 2 years and which have lowish reprint risk, something I would have said about Masterwork of Ingenuity which… just got reprinted. Bummer.

THat said, Hammer of Nazahn ALSO just got reprinted and it’s in quite a few Akiri decks, and it’s finally not being priced out of people’s collections. Since a new set came out every week this summer, I think Double Masters was underopened and Hammer of Nazahn could recover.

This probably isn’t done getting cheap. This peaked at $32 which was largely due to scarcity but it has quite a bit of demand backing it up. Usually the new ceiling is halfway between the pre-reprint peak and the eventual floor, wherever that is. If the floor is $7 like it appears on TCG Player, we’re looking at like $20ish best case scenario. I don’t hate a $7 buy-in if this hits $20 on Card Kingdom in a year or two. Mirari’s Wake is also from Commander 2017 and it’s like $25 on CK right now and they’re paying $17.55 in store credit. I’ll take a free Hamilton in CK credit just for babysitting a card for a couple of years.

Every time they don’t reprint Steelshaper’s Gift, a brand new player drops his the rare from his first ever booster pack in a puddle and quits Magic to go do competitive Rubik’s cube. It seems unlikely it will survive a reprinting, and I’m even a little reticent to buy Sigarda’s Aid despite it being a matter of time before something else comboes well with it and makes it pop again. One card I like for the deck is uniquely suited for this deck because this is the first equipment deck I’ve seen that gives you a 1-mana way to remove equipment, which is new.

If you like your picks on the risky side, I think this only goes up but a reprint likely nukes any chance of it ever recovering. I wanted to discuss this card in particular, not because I like it per se, but because its graph is interesting. The Blue graph is the best buylist price. Since the beginning of the year, the best buylist, I assume Card Kingdom, has been $5 and it hasn’t moved. Since it has remained the best buylist price that whole time, that means not only is CK (I assume) not offering more than $5 on Balan, no one else is or they’d be the new highest price and the graph would move. When dealers are staying away, take the hint. I don’t know why no one has any confidence in this card, but it could have something to do with reprint risk. Whatever the reason for the lack of movement in the buylist price for months, I think there are enough good specs that we can avoid ones dealers and their sophisticated algorithms seem to want to avoid.

This isn’t 100% Akiri-related, but this card is too cheap. In most EDH decks, people only want 2 or 3 swords max since there are so many ways to tutor for them. Feast and Famine is #1 but there’s no reason an equipment-heavy deck doesn’t want this. You’re not always going to get full value is the problem, but “1 planeswalker” scales perfectly from 60 to 100 cards in a way that “2 damage” does not. This belongs in a deck with more than 3 swords, imo. I think it’s as cheap as it will ever get and EDH decks need to run it more. They can’t be in a huge hurry to reprint it and I think given some time, it could see $20 again.

This was recently fairly bulky and some stores who don’t computerize their inventory could have this mispriced in a binder or box somewhere. I recommend trying to ferret out a cheap copy. That said, this “spiked” just on the basis of there being new Partner commanders and not on merit, so this could get a second spike on the basis of the Aikiri deck, which wouldn’t go down as quickly because the cheap copies were discovered. I don’t love retail on this but I do think it’s worth trying to snag some for the old retail price of $2ish.

I realize that isn’t super *great* advice – any card that you get for its old price after it goes up is a buy. However, I think specifically a card that went up for no good reason during a pandemic may be more gettable at its old price at a store that doesn’t 100% pay attention. I also wanted to talk about the concept of second spikes during a pandemic and this let me do that. Plus this card is good in the deck. Besides, I have more picks.

Foil Quest for the Holy Relic is selling out under $2 and I think if you can get these for its current “dirt cheap” some places, you should while you still can. I don’t like EDH foils and I have a hard time moving them, but if this hits $5 on CK, they’ll buy it back for $2 or $3 in store credit and I don’t hate paying $0.50 on these in that case if you don’t trust your ability to out them for retail price when it goes up.

This hasn’t gone up in price in a year and a half. That’s not correct and if this card is adopted at all in Akiri decks, the current, meager supply won’t hold. I know it’s an uncommon, but it’s uncommonly good and its price has already gone up over the years despite the supply. I’m calling this a target, especially with CFB charging a full dollar less than CK, which sells way more copies of this than CFB does.

That’s all the news that’s fit to print if you ask me. There are other cards I could have targeted and didn’t and if you have a specific question about why, hit me up in the comments section or the MtG Price Pro Trader Discord server. Sling those lines and snag those singles. Until next time!