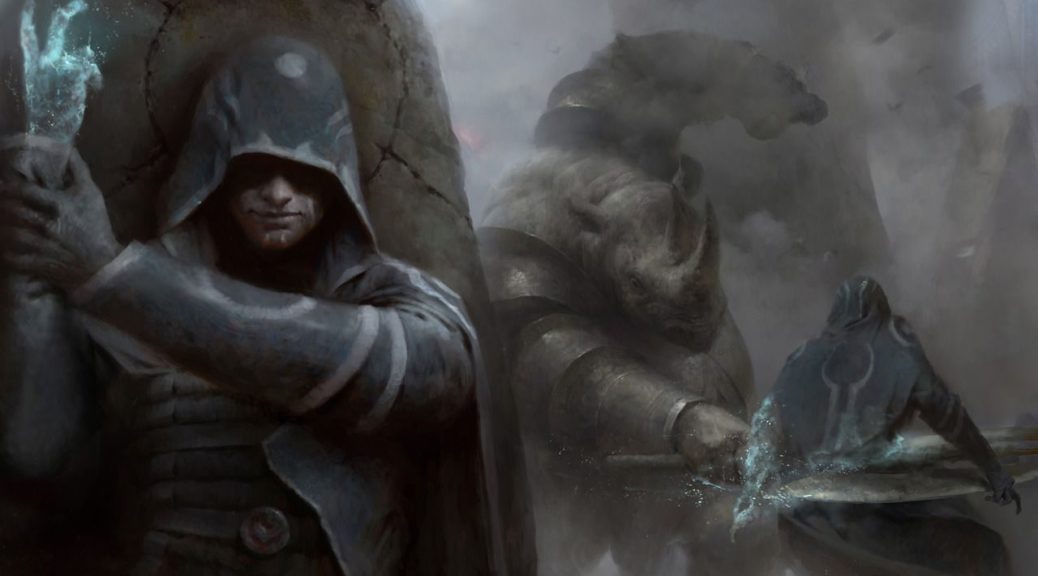 The Rogues deck in Standard has been a mild point of contention recently, with wildly varied takes on how good it is due to the large disparity between how well it has been performing in the hands of the pros vs how well the average Arena ladder-grinder does with it. I’ve played a bit of it myself and had very mixed results, but it’s had me thinking about some Rogues that have applications outside of a Standard environment. There are some interesting ones flying around both in EDH and other competitive formats, and I think they’re worth taking a look at.

Alongside Hullbreacher, Opposition Agent has been one of the biggest hits from Commander Legends, with the Rogue just falling short of first place in favour of the definitely-shouldn’t-be-blue Pirate here. EDHREC will show you the five dual lands as being in the top five spots for Commander Legends because of percentage inclusions, but in terms of raw numbers both Hullbreacher and Agent outstrip them by a mile (around a thousand decks to be a little more precise). These two are super-staples and should realistically be in most 60%+ power level decks that can play them, and you can kind of take them as a pair in terms of my pick logic. But my article isn’t titled “Going Pirate”, is it? So here we are.

Anyway, I’m looking specifically at the EA non-foils here, because they’re only a few bucks more than the regular non-foils at $15, and about the same price as regular foils. That small gap isn’t much when you’re already paying $15 for a card, and so I think that a lot of players will happily fork over the extra few dollars for the extended art versions over the regulars. With the lower supply of the EAs (only found in Collector Boosters), that means that the gap is going to widen, with the EAs increasing in price more quickly than the regular versions.

Now, this is the kind of card that seems like it should be fairly reprintable in Commander sets, but I think we can still get a good run out of it before we see it again. It’s difficult to predict Wizard’s logic on reprints sometimes; as Jason Alt mentioned in the Discord yesterday, Dockside Extortionist seems like a similarly reprintable card but we haven’t seen that one again in 18 months – but either way, the place that this is most likely to show up would be a Commander Precon, which means that it won’t be in extended art, so these versions are safe.

Switching gears now, we’re looking at a card that’s geared more towards the competitive scene. Thieves’ Guild Enforcer has been putting some real work in for the Standard Rogues deck, and can looks fairly innocuous at first but plays multiples roles of milling your opponent, whilst also attacking and blocking excellently a bit later in the game when their graveyard is stocked full. To my mild surprise, it’s been doing exactly the same thing over in Modern, which is half the reason I’m writing about it today.

I’m sure we all predicted the Modern mill deck picking up Ruin Crab from Zendikar Rising, but a fair few of the decks have also been playing a suite of Thieves’ Guild Enforcers to help things along as well. There are a few different variations of the deck but it’s clear that the deck is much better than it used to be, and has been putting up results to prove it. Mill used to be a bit of a meme deck in the format, but has slowly been garnering new tools and is a real role-player in Modern now.

I know I said that this is more of a competitively slanted card, but it actually has some decent chops in EDH as well – at around 1000 decks it’s a big player in both mill decks and Rogue decks (and mixtures of the two), of course being very popular with Anowon, the Ruin Thief. At $5 these are pretty damn cheap for an extended art foil, and I don’t think you can really go wrong with these on a slightly longer horizon.

“That’s not a Rogue!” I hear you say. Well, you’d be right. The eagle-eyed among you have probably spotted that this is, in fact, a Human Knight. So why am I talking about it in my Rogue article? Because there’s a new deck on the scene in Modern, and it’s a bit of a rogue one. Hah!

Affectionately named “Hammer Time” (according to MTGGoldfish at any rate), this is a deck that takes advantage of cards like Puresteel Paladin and Sigarda’s Aid to equip a Colossus Hammer for free and swing in for 10+ damage as early as turn two. Drop an Ornithopter or Memnite on turn one, then Sigarda’s Aid on turn 2 means that even if your opponent has a blocker you can fly over with your Thopter and drop in the Hammer after blocks, rendering the “loses flying” part of the card irrelevant for at least one bout of combat. As well as enabling the free equipping that the deck needs, Puresteel Paladin is a real engine in the deck, using all your cheap zero and one mana artifacts to draw into any combo pieces you’re missing – and it carries the hammer pretty well in a pinch too.

I knew I wanted to pick out something from this deck to talk about today, but foil Colossus Hammers have all but disappeared and Steelshaper’s Gift is well overdue a reprint. Puresteel Paladin, however, has just seen a reprint in Double Masters and the foils are looking real tasty. Original foils from New Phyrexia are up over $20, but the 2XM version is still down at $6 – and there aren’t actually many left sitting around. Only 19 listings on TCGPlayer (and almost all are single copies) means that I think this is due for a correction fairly soon, especially if the deck keeps picking up steam.