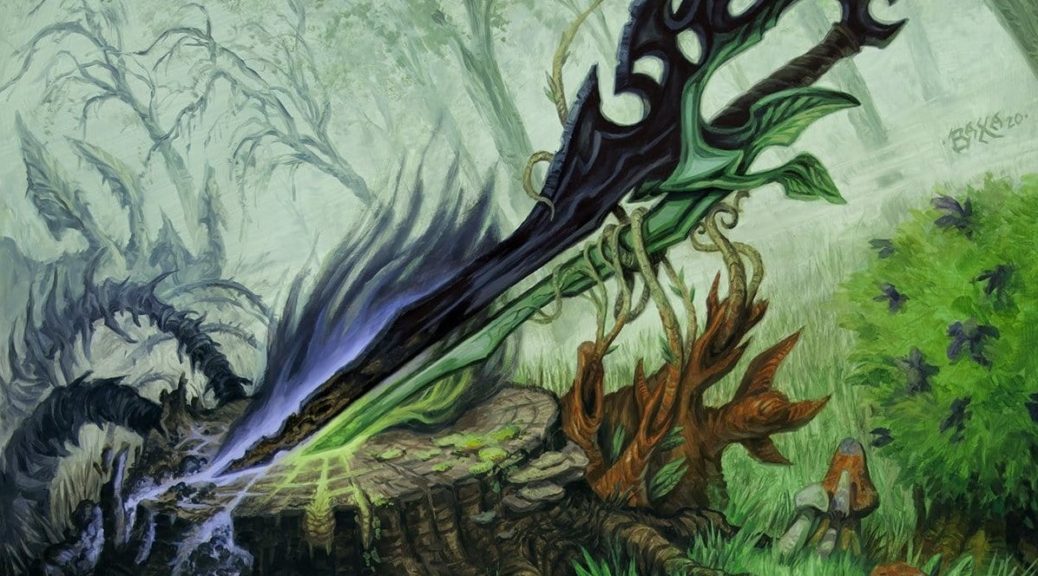 It’s been a little while since I’ve done a dedicated arbitrage article, but there are some fantastic opportunities at the moment for those of you who are able to pick cards up in Europe and either sell them internationally or send them overseas for resale in the US. As always, I’ll link my article on arbitrage here for you to have a read of.

EDHREC is doing a series on Equipment at the moment where they rank every single equipment in the game, and this had me looking at some of the more popular ones. Equipment cards are somewhat unique in that they’re broadly a card type that only ever really sees EDH play, which means that Europe is generally behind the curve on them, and this provides us with some good arbitrage opportunities. No, they’re not all swords, but it made for a catchy title so I’m sticking with it!

Since its release in Theros Beyond Death last January, Shadowspear has pretty much just gone up and up – in both popularity and price. It’s climbed its way right up to over 17,000 decks registered on EDHREC in the last two years, locking in a solid 9th place in the Equipment rankings. It’s honestly a fantastic card for almost any EDH deck – costing just one mana to cast and two to equip is peanuts for the effects you get strapped on (just compare it to Loxodon Warhammer), and being able to remove Hexproof and Indestructible from your opponents’ creatures is a big move at the EDH table.

I said prices have been going up, and that’s certainly true in the US – however over here in Europe prices are dragging significantly in comparison, as is likely to happen with EDH-only cards. Copies can still be had at €5/€8/€30 for regular/EA/FEA versions on MKM, which is honestly still a bargain on all fronts when you compare them to the prices on TCGPlayer.

Stock is especially low on EA and FEA versions now, and although we may see the regular card printed again sometime in the not-too-distant future, it’s unlikely that we’ll see it in the EA treatment any time soon. THB Collector Boosters are getting pretty pricey now, and with the big hitter Uro banned in most relevant places, they’re much less attractive to crack – meaning that not many more EA and FEA cards from the set are making their way into the market any time soon. These are all good for immediate flips but much better to hold for a few months!

Helm of the Host (Foil)

Helm of the Host foils finally popped in the US last week, after years of thinking “any time now I’m SURE it’s going to pay off”. Well, to those of you that held out this long: well done. However, as is tradition Europe is lagging and there are still foils available around €8 on MKM. I don’t think that those will stick around too long as people begin to realise that prices in the US have moved significantly, so I wouldn’t hang around on these if you want any cheaper copies.

If you were in any doubt about how good or popular this card is, just take a look at the EDHREC stats: over 22,000 decks listed clocks it in at number seven in the Equipment rankings, because it turns out that being able to have multiple copies of your commander out can be preeeeetty good in the right deck (and it works just as well on other creatures too!), despite the relatively costly mana and equip costs. I like this as a quick flip target across the pond, but holding could be totally reasonable for you as well, and you might be able to get closer to $40 for this a couple of months down the road.

Now for my last pick, I know that this is really only played for the back half of it, but it’s still technically an equipment and it’s also got a ridiculous price disparity between the two continents – and it’s also the closest thing to a sword in this article! This card spiked in the US a few weeks ago, but – you guessed it – Europe is dragging its heels, and there are still €5 copies on MKM. Not too many of them, mind you, but the opportunity is there and waiting for you to grab it.

This is a much less popular card than the other two I’ve talked about today, but it’s a lot more unique in the fact that I don’t think the Buy-a-Box promos from Ixalan will ever be printed in the same fashion again. These are the ones with partial maps on the back, that if you line them all up together they make a big map of Ixalan. It was a really cool idea and makes these a great collector’s item, as well as the cards just having good art and foiling on them.

If you’re wanting a premium version of Dowsing Dagger then you’re choosing between this, the set foil and the prerelease foil – and I think we all know what the best option there is. I think you’re even good to pick off the sub-$30 of these in the US, as they’re heading towards $50 in no short order. Growing Rites of Itlimoc is already there and some of the other BaB promos from Ixalan are well on their way – they’re all pretty good EDH cards and if you can get them cheap in Europe, I’d strongly advocate for it.