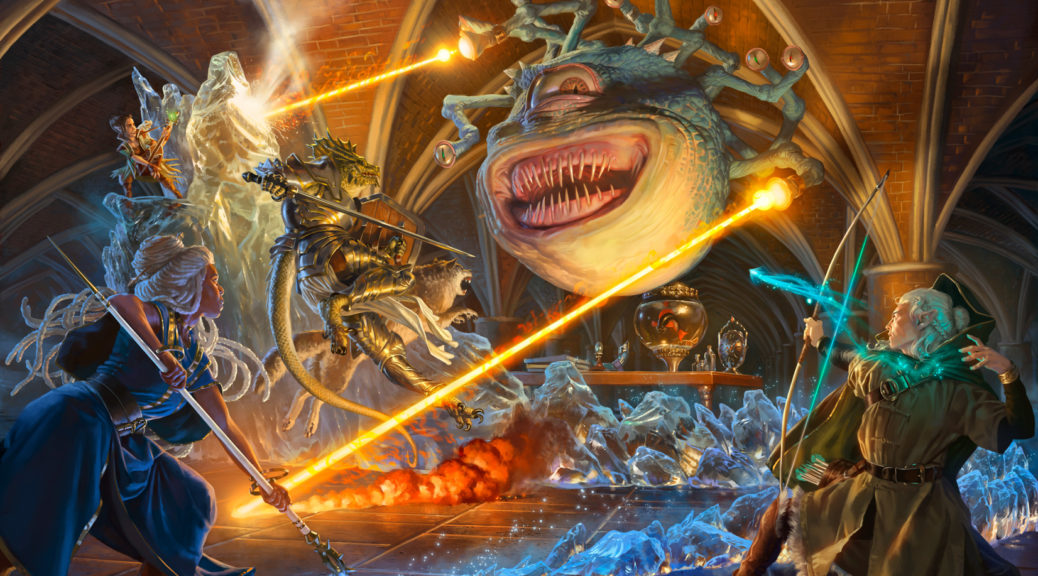 Yes, with another set comes the need to look at booster pack formulations and see what’s out there. We have an article about how to get the special Monster Manual versions of cards, or the Dungeon Modules, and we’re going to figure out how to get the cards that we want.

For once, this is pretty straightforward, and I appreciate Wizards giving us a break from the wacky things they’ve done in sets to make certain things more scarce than usual. First, the basics: We have 101 commons, 80 uncommons, 60 rares, 20 mythic rares. That’s for the nonfoil, basic frames, and that’s what you’re opening and drafting if you’re doing this in paper.

Let’s start with the Showcase variants for this set, of which there are two: Monster Manual frames and the Classic Module treatment.

Apparently these really pop in foil, but we will see. There are 16 commons with this look, plus 18 uncommons, 15 rares, and two mythics.

Then we have the Classic Module, which is only for lands:

Since this is a lands-only treatment, it’s on one common, one uncommon, and seven rares.

To go with the Showcase treatments, we get what we’re used to: Borderless cards with different art than their original card (5 uncommon dragons, one rare dragon, and eleven mythic dragons/planeswalkers) and Extended-Art cards (30 rares, seven mythics) to round out the set. Interestingly, the seven rare class cards don’t have any special treatments.

It’s pretty neat that there are four different treatments, but pay special attention to the lack of etched foiling here. We’ve got four treatments, and it’s either foiled in the traditional method or not foiled at all. No in-between of the etched versions to worry about.

Let’s take a moment and reflect on what you can find in a Draft Booster or a Set Booster. You will not find Extended Art cards, but you can get the other three treatments, in foil or nonfoil. Your odds are pretty terrible, though.

First, your odds of getting a foil rare or mythic in a Draft Booster are pretty bad. One in three, multiplied by the collation of rares/mythics to commons/uncommons gives you 5.3%. That’s the drop rate for foil rares and mythics, about one in every 20 packs.

To get the variant foil frame in rare or mythic will be .53%, or roughly one in 189 packs, and that’s for any rare or mythic with a non-EA frame, of which there are 36 to choose from. So that Borderless Foil Tiamat will appear in one out of every 6,804 Draft Boosters, give or take.

If you want another way to talk about these numbers, you’ll get a foil rare or mythic rare in a variant frame about once per case of Draft Boosters.

When it comes to Set Boosters, your odds are improved, but I’m sad to say that I don’t have enough information to give you a percentage. You start with a guaranteed foil, but they haven’t yet published enough information about the collations for me to know how they got the 27% for two rares, 3% for three rares, and less than 1% for four rares.

If more information gets published, I will update this section.

Collector Boosters are the main event, though. First of all, it’s the only place to get Extended Art versions of cards, though as we’ve seen, the foil versions of the Showcase frames aren’t plentiful either.

The big draw is going to be that first slot. A foil rare or mythic of anything special, and this we can indeed calculate:

Given that rares are twice as common as mythics, your odds of any specific rare from these four categories is 1/63, and for a particular mythic it’s going to be 1/126.

This is in line with the ratios from Standard sets, but keep in mind that there are often special cases, like a Mystical Archive or a foil Phyrexian Vorinclex messing with our perceptions of scarcity. Let’s do some comparing:

I don’t want to compare TSR here (no Collector Boosters) or Commander Legends (see gimmick below) but you can see that Forgotten Realms is going to play out a lot like Kaldheim did, only without the Vorinclex to be the chase card.

Also, the way that the Mystical Archive skewed the heck out of Strixhaven bugs me. Just a whole lot of rares crammed into one spot. Should have been 1/159 for mythics and 1/79.5 for rares.

I’ve talked in other recent articles about how this set is going to fall fast, given the lack of truly chase/powerful cards, and I haven’t seen anything in the distribution of the set to make me think otherwise. Commander Legends had a gimmick where in one slot, your Collector Boosters had only a 30% chance to contain a Foil Extended Art card. They have upped that ratio considerably, thank goodness.

However, keep in mind that if a set is viewed as underpowered or low value, then less people will open it, making it more scarce. That’s a fine line to walk, and I think we will have our chances at buying AFR at very low prices. Just be aware of the complications, which we will address with individual cards as we go forward.