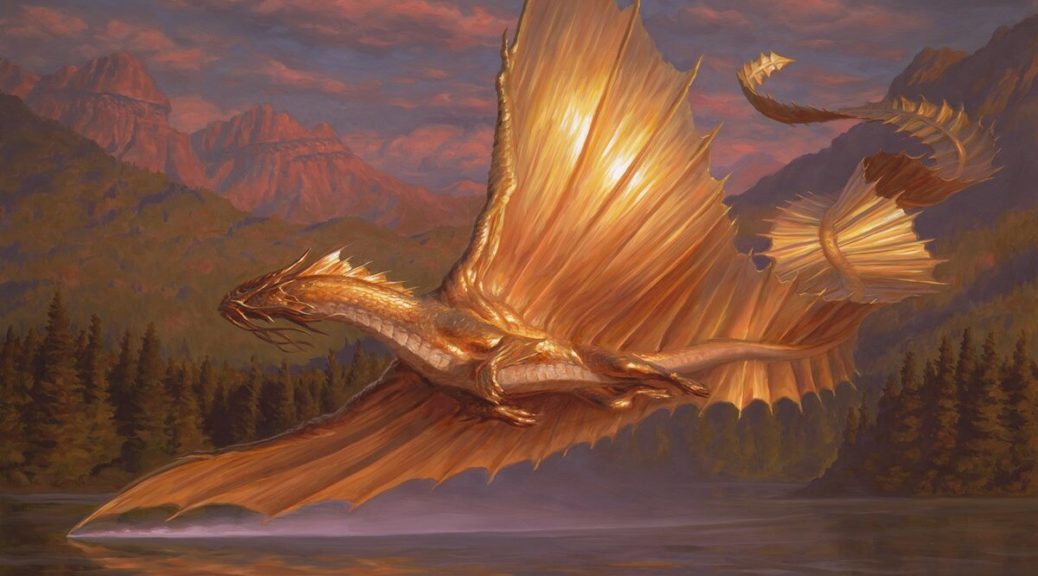 Every once in a while, it’s good for me to be transparent about the purchases I’ve made. Generally, you can expect that I’ve been making purchases of things I pick, or at least I tell you what price I’m looking for. I want to tell you about the things I’ve picked up that I didn’t necessarily write about.

I’m also going to make a distinction between the things I buy for speculative purposes (the things I intend to resell later for profit) and the things I’ve purchased for my own Commander decks.

Did buy: Most Dragons for my Ur-Dragon deck

As a five-color deck, I get to have my pick of all the dragons ever printed. My deck is heavy on the slam and roar and attack, nothing too fancy. Because of The Ur-Dragon’s ability (and btw he’s overdue for a reprint in some way) to lower casting costs on Dragons, it’s really easy to overlook what it does.

Especially when I’m adding Iymrith, Desert Doom for $18 and Ebondeath, Dracolich for $15 in borderless foil. It’s possible that those drop down another buck or two, but I’m not going to sweat that too hard. Vendors and dealers have gotten their allocations and are cracking like mad, so there’s still space for the chase versions to go a little lower when individuals get their sealed product this week, and usually put it on the market the second weekend of availability.

Ebondeath is a card I might go a little deeper on if the borderless foil starts knocking on $10. It’s recursive, which is good, but it’s also a Dragon Zombie, an intersection of two extremely popular tribes. $15 is a bit high for my taste when I don’t have any special reason to like a card, but recursive threats in good tribes catch my eye.

There was a point this past weekend, on 7-23, when Tiamat in borderless foil could be had for $50. It seems odd to me that the chase mythic of the set would be a five-color Commander, which hasn’t yet been the case with other Commanders. The foil is back over $70 this week, but I’m expecting this price to tumble back down. Right now, we’re still seeing people buy this card in a hurry to upgrade their Commander decks. I respect that, but I’m not going to spend $70 when a couple weeks’ patience will save me $25 or more.

If you don’t believe me, allow me to share the graph from a card sought after much harder than Tiamat at the beginning, and also in a set that’s relatively underpowered: Phyrexian Foil Vorinclex.

There’s a whole lot of copies under $160 for this card, there’s not just one outlier making things difficult for the algorithm. The hype has died down, and while I know I could get the best price by waiting three months, I’m willing to pay Tiamat’s price in about 3-4 weeks because I really want to play with the Dragon God.

Granted this was about a month and a half ago, and the price is a little higher now, but there aren’t a lot of cheap Inventions left in the world. This one is near and dear to my heart, as I have lots of Commanders who love hexproof. This has had exactly two printings: Commander 2011 as a nonfoil, and then this as the only foil version out there. There’s a lot of good Equipment out there for Commanders, but one mana for a big buff and that wonderful, wonderful feeling of hexproof is high on the list for me.

There’s more copies out there on TCG under $4, but I don’t like buying single cards and having to unpack them from shipping. It’s worth a little more money from me to get several at once, rather than save 15% but have 16 different envelopes to open. That’s something I do–if you don’t mind getting more letters, then rock on.

Unholy Heat has taken Modern by storm. Dragon’s Rage Channeler already pushes you to want delirium, Mishra’s Bauble doesn’t really cost a card in enabling that status, and if you get there, the rate on Unholy Heat is the best ever. And it’s an instant, and can even take out planeswalkers! I have high hopes for this card, common or not.

I don’t think these are going to spike or anything, but this is the cheapest they will be going forward. Go ahead and get the ones you want/need.

Did buy: 12x FEA Path of Ancestry for about $4 each

I’m unlikely to go deeper on this, because I worry that Commander Legends 2 will have this as a reprint next year. We aren’t going to get CL2 in 2021, but it seems a lock for 2022. Path is a five-color utility land that really rewards tribal decks, and even though the basic one comes in most Commander decks, there have only been two foil versions. Over on EDHREC, it’s registered in 53k decks, proving what a staple it is.

While I adore this card and what it does for Goblins decks, I’m not ready to stock up on things from AFR. We’re only a week in, and it’s got plenty of time for the price to trickle farther downward. I do note that there are cheaper individual copies out there, and CK has a set of 8 for $2.50 each, which is a more appealing price. Even with all that, the first week of a set is not the time to be purchasing the long-term specs, so I’m staying away for now.

One thought on “What I have and Haven’t Bought”