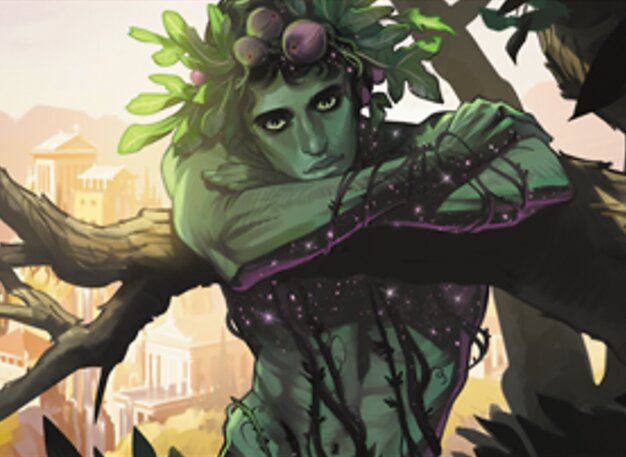 With rotation just around the corner, it’s time to take stock of a very powerful set and see where the deals are. Ideally we want cards with casual appeal or Eternal demand, and hopefully people will be selling off spare copies when it’s official that they are no longer Standard-legal.

I expect, based on historical trends, that we are near the bottom on these particular cards but I wouldn’t be shocked if they fell a little further over the next month or two. Up to you if you want to buy in now, but I’m comfortable doing so.

Thassa’s Oracle ($9 for the regular nonfoil up to $75 for the Foil Extended Art version) – The most popular card from Theros for Commander, I imagine this is taking a lot of cEDH attention but it’s a solid plan to back up Laboratory Maniac and Jace, Wielder of Mysteries. This is registered in more than 32,000 decks online, and is a win condition that resolves even though removal. Counterspells or bust! Jason did an excellent job last week talking about this card, so I’m going to be brief here.

Dryad of the Ilysian Grove ($17 to $77) – The Secret Lair that just ended, with Special Guest: Fiona Staples, had a reprint of this card with some sweet art. That’s being sold for $30ish but won’t be available until October. The announcement of the SL version did absolutely nothing to slow the trajectory of this card:

Not only is this a card with EDH chops (30k decks and counting), it’s also a card present in Amulet Titan and Scapeshift decks in Modern. This will need a serious reprint soon or it’ll be a $40 card. The better deal would have been to get in on these during Ikoria’s draft season, when they could be had for a whole lot less, but the rise is real and it’s definitely time to snag the Commander copies you might need.

Destiny Spinner ($3 to $8) – As an uncommon, this has just the regular and the foil, but the Commander demand for a two-mana, make-your-favorite-spell-type-uncounterable card is VERY real. It’s not just that creatures can’t be countered, but your enchantments too, and that’s an overlap players love. I don’t imagine this gets activated all that often, but this is the whole package and while the reprint risk is real, the foils are a most attractive opportunity.

Calix, Destiny’s Hand ($2 to $5) – You can get the borderless foils for under $5, with random copies reaching to nearly $3. That’s a lot of disrespect for an archetype that gets a lot of support: GW enchantments. Clearly the demand hasn’t been there yet, with Calix not even breaking 5k, but I love this as a buy-low spec. This will end up being one of the first cards players go to with a new deck.

Setessan Champion ($1.50 to $25) – That FEA price is a real one, reflective of the demand for this card, and this theme, in enchantment-based Commander decks. That’s a huge multiplier, far more than what would be expected, and a clear sign of where the money is going. This is a prime candidate for a Commander deck reprint, when they inevitably do some enchantment theme again, and so I’d stay away from the cheapest copies.

Over on TCGPlayer, there’s almost no copies of this in FEA or even plain EA, making those where I’d prefer to put my money. The recent spike and the subsequent lack of inventory doesn’t faze me here. The next time a good enchantment general comes along, this will crack $40 and maybe $50.

Uro, Titan of Nature’s Wrath ($14 to $125) – Banned everywhere but Legacy, the casual demand for this card is still very strong, being Cube-worthy and in 8k decks online. Simic is widely known to be the best color combination in Commander, and spells like this are why. It’s a pretty easy thing to do, to use this as a ramp spell and then get your value in a little later. The graph shows us when the bans hit, and hit hard:

We’ve pretty much missed the window for the FEA versions, but the basic ones are a good choice, as are the Kaldheim-style Secret Lair versions that are out there for around $30-$40. Putting them in a Secret Lair so quickly means this is probably safe from reprints for a while, but there’s no guarantees.

Ox of Agonas ($6 to $30) – The Commander demand isn’t there, but this sees just enough play in Dredge lists for Modern and Legacy that I’m thinking about buying a few copies if the price trickles a little further south. It’s got everything you want for that archetype, and as a mythic, there are that many less copies out there. I’d prefer to have a stack of the basic versions, as compares to the fancier EA and FEA, but you do what works for you.

Nyx Lotus ($4 to $32) – Devotion decks tried real hard in Standard, but never really got there. Commander, though, is where this card shines. More than 15k people have registered this online, and I imagine almost all of them are mono-color decks. Depending on what you’re playing, this might give you a lot of mana, or a boatload of mana. The FEA version was available for around $20 a while ago:

Would be nice if we’d bought in then, but the downward trend is what I like to see. Be patient and when you see the price flatten out, grab your personal copies and a couple of spares.