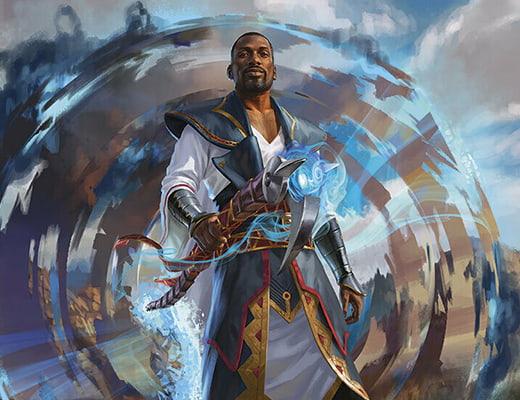 The last set that rotates out in less than a month, Core 2021 offers a whole lot of cards we need to keep an eye on. Some of these I’ve already bought deep on, and others I’m debating when I want to start buying. Truth is, this set has a whole lot of goodies for Commander players, and that means we need to pay attention.

Keep in mind that while Commander demand makes us happiest, we also benefit from these being cards popular in Standard that people might be selling off as rotation hits, causing a further drop in prices.

Terror of the Peaks ($26 for the cheapest version to $80 for the Foil Extended Art) – As a card that sees play in a few different decks, though never a four-of, this is high on my radar. It’s got serious applications as a combo piece, is a very good Dragon to put in play before slamming down 6/6’s, and is going to get at least 3 life out of someone. It’s been on an upward trend lately, probably due to Tiamat/Ur-Dragon popularity:

So what I’m hoping for here is that people sell the copies they wanted to use in Standard decks, but this card’s price probably has more to do with the Commander demand than anything else. The ship has definitely sailed on its Foil Extended Art copies, but if this comes down below $20 for the regulars, I’ll probably be in for a few.

Garruk’s Uprising ($1 to $2.50) – Believe it or not, this is the most popular new card from Core 2021 on EDHREC, being registered in just under 21,000 decks. It’s not hard to see why: It gives a very relevant ability to green creature decks, it tends to cantrip, and it rewards you for doing what green wants to do: pump out big creatures!

The showcase version looks better, in my opinion, but the pack foils are slightly more expensive at this point. I don’t think that will hold, and I’m already 40 copies deep on showcase foils for about $2. I’m not expecting them to get cheaper from here, but I think these are an excellent candidate to gain a lot of value in the coming months.

Chromatic Orrey ($19 to $42) – I’m not sure what caused the spike a few months ago, but Orrey does what you need in a big-mana, multicolor Commander deck. It’s never seen Standard play, so it’s not going to have a price drop. Since the jump earlier this year, the price has been trending down, though:

I’m probably going to wait a bit longer for regular copies of Orrey to get cheaper before buying in. If you want to get your FEA copies for your decks, though, that’s a valid plan I can believe in.

Fabled Passage ($7 to $40) – This has been printed twice, and is the only fetchland legal in Pioneer. I’m looking extra hard at the WPN promos, the foils in a retro frame, because they are plentiful right now in the $7-$8 range and if that’s the price of the most basic ones, why not upgrade? This is in 75,000 Commander decks, so you don’t need to preach the virtues much farther than that. There was a chance to get in on the special foil for a little cheaper, but that’s in the past.

Given the popularity of the card, especially in Standard, I’m hoping that rotation hits this pretty hard and the regular nonfoils drop to under $5. They are a steal at that price, and your only concern going forward would be a reprint. Considering that they did this twice in a year, and made sure it would all rotate at once, I think you’re pretty safe. Given the popularity, and now easily it fits into a wide range of decks, being in a Commander precon wouldn’t damage the price very much, as anyone who bought the deck would have a place to put the card.

Azusa, Lost but Seeking ($7 to $111) – Azusa has really ridden a rollercoaster over the years:

The Masters 25 reprint brought her price low, and it recovered eventually, taking another hit when the Core 2021 reprint came around. She’s another card with a wide range of play: Popular in Commander and big in one of Modern’s top-tier decks, which has explained the ups and downs over the years. She’s at a low point now, and this is a good time to pick up copies.

Now we get a chance to buy up cheap copies? Sign me up. Ugin is incredibly popular in Commander, mainly because he solves almost all of your problems. I’d prefer to get copies cheaper in about a month, but I don’t think he’ll ever spend long under $20.

Grim Tutor ($16 to $90) – Being $300 at one point, due to only being the 1999 Starter deck, means that this has a lot of price memory. People think it’s expensive because it was so expensive! It’s not useful to think of cards that way, because this is not a very good tutor. It’s better than no tutor, though. Surprisingly, this is in nearly 20k decks online. That’s only 20% of the numbers Demonic Tutor has. I’d be looking for this to get a LOT cheaper before I bought in, though.

Heroic Intervention ($9 to $21) – Just over 69,000 decks online, with all of the price being due to Commander. It’s been $20 in the past, and could be again if it’s not reprinted. The prices being so close together makes me nervous, meaning that there isn’t a premium for the most premium version.

Elder Gargaroth ($16 to $34) – This might not be the best green creature ever, but the efficiency is amazing. If it lives! It’s only in 6000 decks online, which is low for a card with this price tag. This should have its price drop after rotation, as it’s in some Standard decks, but if it’s this much now, I doubt enough copies will be sold to get it to $10 or less. A more reasonable target is $12.