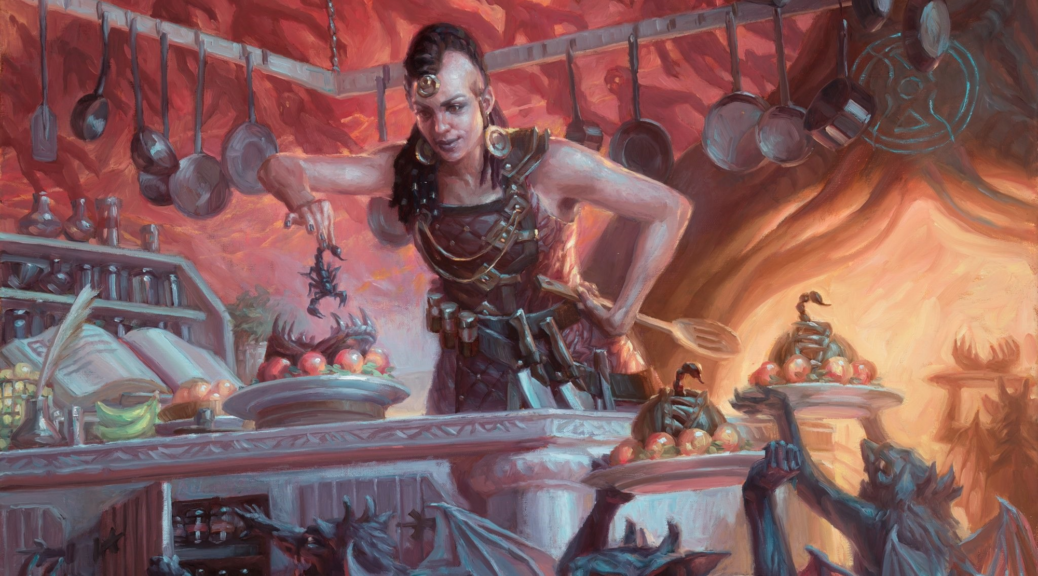 Last week I talked all about panning out and looking at the format at macro scale to see that not all “best commander in the set” are created equal. I don’t think I do that enough, and a constant parade of new products made me very comfortable just writing about a new deck every week. The thing is, I found last week’s article useful because it got me thinking about things I take for granted, and things I gloss over when I focus on new stuff. The thing is, there is a class of “new” cards that we all gloss over, but which we should pay a lot of attention to because if there is anywhere to make easy, free, reliable money, it’s there. I’m referring, of course, to cards that are in the Top 100 cards in the last week but not the last 2 years meaning they are relatively new staples but still have a chance to go up in price. That’s a mouthful but hopefully they’ll… be a walletful? Because of the money you’ll make on them? That you’ll put… in your wallet? Look, they can’t al be gems, I’m here to find you some picks, not make jokes. To that end, let’s look at some cards.

Just in case it’s not intuitive, the way to find the page is head to the edhrec homepage first.

In the top left there is a series of drop-down menus. We want Cards.

Select Top Cards from the menu and it will take you to the Top Cards page. I mean, obviously, but I’m setting up the next pic, chill. You asked for this (play along, I’m pretending you need this because someone probably does).

On that page, you can select the date range. I’m going with the past week. If this was too hard to follow or if you figured I would link it for you, I’m going to link it for you. Let’s look at some cards, shall we?

There are a LOT of staples on here. We can cut this list down by using our list comparison tool to cut out cards that are in both lists, meaning we’ll only get recent cards. That seems worthwhile to me, let’s do that.

There are 89 cards in both lists, which gives us 11 cards to work with which is… fewer than I thought. However, the list of 100 has a lot of cards that “feel” new and which also are less than 2 years old, meaning they ARE new. Let’s look at the 11 first.

A lot of these are not new. However, some of these should pop out at you.

This seems fairly obvious. If Modern comes back in paper, a non-zero number of decks need this, it’s potentially a card if paper Legacy ever happens and it’s in a LOT of EDH decks for how new it is. It made the Top 100 cards of the week. How many Jund commanders were printed since the set came out? 0, that’s who. With the price beginning to rebound on Card Kingdom, it’s time to pull the trigger. I realize there are other targets, but this just feels like free money.

I posted this so we could talk about it. I’m not sure I love this at a $32 buy-in, but one potential wrinkle is that this is not playable outside of EDH, so while its price is somewhat controlled by a lack of cross-format appeal, it’s also kind of tough to reprint. I don’t love this at $32 because I have to imagine if this approaches $50, they’ll find a way to reprint it, but since the precon it’s in costs like $35, you might just use this as a way to get 99 free cards for now and re-evaluate later.

Bedevil got a reprinting, which was inevitable, but given that it was nearly inevitably going to be reprinted in a commander deck, let’s look at the foil.

You know I don’t love foils, but this appears to be gettable for cheaper than the non-foil peaked at, so it seems like a pretty sold pick-up to me. The foils are cheap, harder to reprint than the non-foil which just got hit, and it’s basically a format staple moving forward. Sure, it wasn’t in the 2 years ago list, but can we agree if it’s on the list of cards for the month that Prosper and friends are going to make this a buy at $6?

I won’t lie, I didn’t imagine this card would be this popular, but Damn is showing up a LOT. It’s not done plummeting, but when it stops, I especially like the old border versions of the card. Damn is played more than I expected and I might not have noticed it was getting played enough to make the Top 100 until it reversed its price trend and started creeping back up. I’m glad I noticed now.

I thought the ship had sailed on this card when it hit $15. It’s crazy that we all had a chance to get this for under $10 and not all of us got enough copies to make bank selling now that CK thinks it’s worth almost $30. If you can get these from Europe for under $10 for English copies, it may be worth it, but also, TCG Player has these for under $20 and that may be the play. CK buylist was nearing that at one point, and it’s not like this is getting worse in EDH.

I think all of these cards are going to go up more, even the ones that are already kind of expensive, and I think it’s good practice to abandon my very specific method occasionally and get back to fundamentals. I think these are fundamentally sound picks and I stand by all of them.

That does it for me for this week, readers. Thank you for your kind attention and continued support, and if you have any questions about how to use EDHREC as it is or suggestions for how it could be, I’m oddly enough an excellent person to talk to about it. Hit me up in the comments or the MTG Price Pro Trader Discord which is pretty insane value. Until next time!