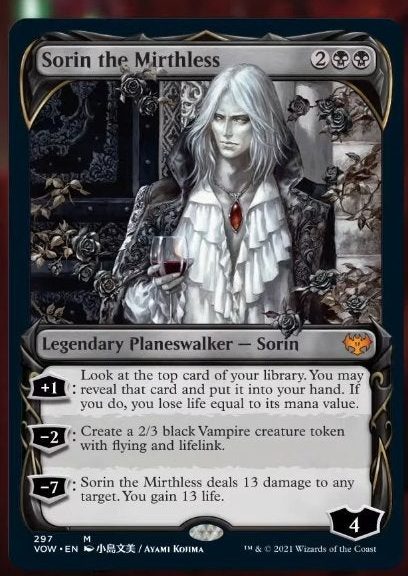 All right, everyone, let’s get into the distributions of different Innistrad: Crimson Vow cards.

Normally, I can’t write this piece after the first day of previews, but they decided to throw me a bone and tell me enough specifics to let me make some pretty good guesses.

So let’s get to the numbers!

We’ve got five ways that a card can be different this time: Extended Art, Eternal Night, Fang Frame, Dracula Series, and Borderless. EA is really for the cards that don’t get one of the other treatments, so let’s take a moment and review what’s getting what, so far.

For each of those treatments, I can’t yet give you exact numbers on most of the cards. For a select few cards, we’ve been told how many versions of a card exist, and that leads to knowing some specifics for the Collector Booster drop rate.

Normally I wouldn’t be too interested in this level of spoiler, but in case you didn’t know, Ayami Kojima is a really big get, as one of the primary artists behind the Castlevania series. I will leave it to your own experiences to determine which is a stronger influence and a more popular crossover, but be aware that there will be a whole other market for this card, just as there was for the Liliana, Dreadhorde General.

We’ve got some numbers, though, and we can compare what the drop rate will be for the Kojima Sorin to the drop rate for other special versions, like the Phyrexian Vorinclex.

What I can tell you at this point is that in Draft Booster, you’ve got a 1/148 chance of getting a particular mythic rare, and then a 1/74 chance of pulling a particular rare. It gets worse, statistically, from there.

So you’ll pull a non-foil Kojima Sorin the Mirthless in approximately every 1,332 packs. You’ll have a 1/444 chance of getting a special-frame Sorin, and since the three versions are equally spread, that’s where the 1,332 comes from. The foils in a Draft Booster are tricky to calculate, because only 1:45 cards in Draft Boosters are foils.

For the Collector Boosters, your odds are going to be better, but I can’t say precisely how much better. I need more specific information on how many of each rarity are present for each special frame, but I feel pretty confident saying that it won’t be as rare as the Phyrexian Foil Vorinclex, back in Kaldheim. When that was released, we were told that all the copies of both versions (Showcase and Phyrexian) would add up to the same number of copies as things that didn’t have two such versions.

I’m anticipating that the Kojima version of Sorin in foil is going to show up in the 1/150 range.

That means it’ll take roughly 12 boxes of Collector Boosters to snag the one Kojima foil. To get that estimate, we know there’s 40 extended-art rares and 12 extended-art mythics, so that leaves 24 rares for the Fang/Night/Dracula frames and 8 mythics for the same. Some of those will be repeats, but the precise numbers will need to wait.

I would NOT compare the Kojima numbers to the Amano Lilianas, because the distribution is MUCH different. Kojima’s card is possible in Collector Boosters of any language, and Amano’s was only in Japanese-language War of the Spark boosters. What I would expect, though, is a price curve that looks a lot like the Phyrexian Vorinclex:

The demand will spike HARD early on, and then trickle off as assorted collectors get their hands on the card. The number of copies available will not make for the same demand curve as the Amano Liliana.

One other thing to keep in mind: Sorin the Mirthless in other versions probably won’t be a super-pricey card. It’s taken a long time for Liliana, Dreadhorde General to climb, even as some of the other cards from that set have had their own financial jumps.

I hope that this helps you figure out what to do about this special artist crossover, and how to make some informed decisions when preordering or considering picking up this card for your collection.