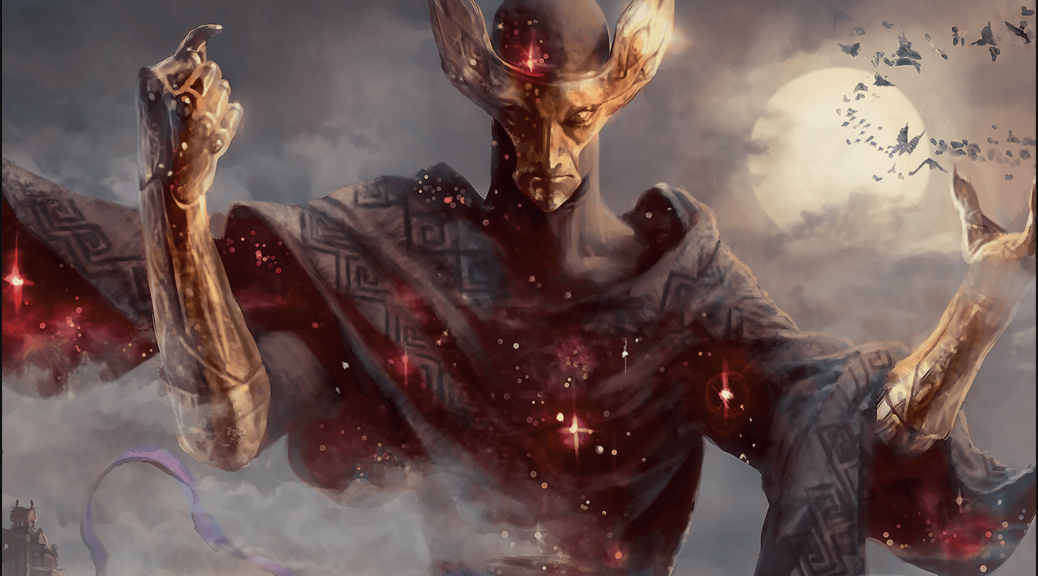 Usually the first second we have some EDHREC data, I write a “quick hits” article where I very briefly go over everything I think is in play, but with the EDH decks being spoiled, I think it doesn’t make sense to do that for this set specifically for a few reasons.

First of all, there is a card that’s lapping the other commanders, and it has been revealed for less time.

Second of all of the Vampires cards were either reprinted (the precon is actually packed with gas, to an insane degree) or they went up weeks ago when, frankly, every finance writer told people to buy them and, also frankly, you already knew that. If you care enough about finance to read this, you pay enough attention to know the writing was on the wall for Vampires. What wasn’t anticipated, however, was a card that is a Commander card but a set booster exclusive? I guess? It’s really unclear where this card came from. What I do know is that it’s not in the Commander decks but it’s a Commander card and people are excited.

Excited it putting it super mildly, sorry for burying the lede. People are hype.

Is that a lot? Is it not a lot? I don’t know. I do know that Umbris hasn’t been known as long and it’s making a ton of waves. Since the Vampires stuff is basically picked clean and Umbris came out of nowhere, I want to focus on it. Since the Umbris stuff is very specific, very potent and a lot of it is much older stuff that people forgot about it, I really want to focus on it. Focus on it I shall. Let’s get into it!

I could literally call it an article here and it would be nearly as valuable as me continuing. If a picture is worth 1,00 words like I’ve argued it is, here is 14,000 words on why Umbris is a game-changer for EDH. Some of these cards are EDH heavy hitters, but some of them have never really made an appearance and are going to go from 0 to 100 real fast. Let’s look at the very underplayed ones first.

Very, very, very good in the deck, mythic, from a set full of gas so the value is basically already established for the set, historic low price – believe me when I say I considered posting this and like 2 more graphs without comment and calling it a night.

You’re telling me that there are 2 Ashioks that are going from trash to treasure? You can’t miss here. Remember, I established that Umbris is very popular and that’s going to take these bulk gems that are at your LGS for their old price right now and make them into real cards people want. The demand looks like it will be there, and the supply is very much still in the woodwork. These have me salivating.

I LOVE this pickup. This card is very good but for some reason, people needed a better excuse to play this. Well, here it is. On the podcast this week, Corbin mentioned that irrespective of everything that is great about this card, we’re one “whenever a card goes to your graveyard, gain a life” away from this drawing your whole deck, also. This is not Griselbrand, but it’s legal and that has to count for something.

There’s even more gas here! I might argue that a few of these cards might be even better because they’re high play but low synergy but not generally considered staples. Once you filter out format staples like Cyc Rift and Rhystic Study, you wonder; which decks are playing Sire of Stagnation and Hell’s Caretaker enough to drop the synergy score? If Sire and Caretaker, and I suppose Forgotten Creation are getting help from other decks, but their supply is low because they’re not attractive buylist fodder, they could go up as high and hard as the high synergy cards.

This has been very sneakily going up. Buying at $1 feels better than having to pay $4, but this is a mythic and it could easily hit $10. Would Umbris be enough to get it there? Well, no, but something made it quadruple over the last couple of years and that trend seemed likely to continue.

Sire sees quite a bit of action and some more is absolutely not going to hurt, especially when supply hits a tipping point.

7 NM copies left and that’s all she wrote for CK’s supply, a site that, whether you like it or not, is a better indicator of EDH demand than any other site.

I love to talk about the reverse-J shape that is the first half of a u-shape, right? The U shape is a price recovering, so when you see that nice J shape, you know you have a choice to make – do you bet money that the price will recover? I would absolutely bet $7.78 a copy that these can flirt with $15 or more again, if not from this than from something else. Phenax being on the list kind of sucks, but I don’t know that it will be enough supply to keep Phenax down.

This is this set’s Chain of Smog and I don’t see a single person talking about it. Will it go up like Chain of Smog did? No, because Chain of Smog was obvious to people who don’t play EDH and this pick is only obvious to people well trained in sifting through EDHREC data. I bet there are half as many Planar Voids as there are Chains of Smog, though. This is really looking good to me and there is no reason not to play this unless it’s a nonbo with other cards you have.

It is difficult to overstate just how many cards are ripe to pop off on the basis of this new deck. Gravestorm was a middling card, but in this deck, it’s a painless Phyrexian Arena when it’s not growing your commander. Umbris is going to straight 1-shot people, I can’t wait to get a copy and built this dirt.

Safe to say we’re shaking off the Double Masters printing.

Seriously, just go to the page yourself and look. There is insane value in this deck. If it’s played as much as people say it will be, which is to say as much as the top 3 Vampires combined (and people are spit building Odric because other people said it sucked on Twitter, I think it’s just bad) then we are going to see a ton of cards go off hard. Be someone who has them because you heeded my warning. That does it for me, nerds. Thanks for reading. Until next time!