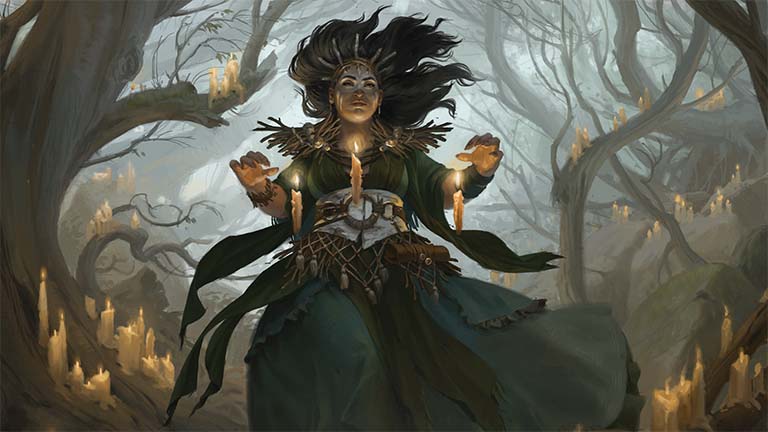 We’re a few weeks into Crimson Vow and I want to look back at Midnight Hunt, to see what time has done to some of these prices. Some have risen, some have fallen, but it’s good to think about the whys and hows for each.

The price movement on these is mostly without in-person events happening, depending on your location. Big vendors have opened their fair share of packs, but stores aren’t fully back, and the casual numbers aren’t fully back either.

The Slowlands ($4-$9 for the cheapest versions, $10-$14 for Foil Extended Art) – These are surprisingly popular in Commander, popping up in 5600–8700 decks, depending on the color combination. It’s not difficult to see why these are popular, as most Commander decks don’t care too much about turns 1 and 2. What I’m surprised by is how quickly these were adopted by Commander players, I thought it would take longer. Part of the price on these is Standard demand, and that’s got a long timeline to go. We’ll see what the next batch of nonbasics hold, but multicolor decks have two great cycles to choose from: Pathways and Slowlands. Here’s the graph for the most expensive, Shipwreck Marsh, that shows the increase in price over these few weeks.

It’s quite possible that the rotation of the Pathways next October will cause a minor bump in the prices here, but it takes a whole lot of demand to make any land crack $10, so I’m not going in hard on the regular copies. The FEA copies have potential long-term, as they are non-fetchable dual lands, and there’s not a lot of those that come into play untapped in Commander. We do have the price pressure of the Double Feature lands coming along, and a Secret Lair with all ten of these seems inevitable. I probably won’t move in on these, but I’d understand if you wanted to.

One other note: the slowlands in VOW are worth looking at in this context as well. Normally you’re staring at the UR land, but that’s not the choice here because these lands are bad on turns one and two. Instead, look here and plan ahead:

Augur of Autumn ($7-$13) – It’s no Oracle of Mul Daya, because that second land per turn is really amazing. It’s got potential to play cards off the top, but we’ve also got that card in Vizier of the Menagerie. It’s nice to have a single card be a backup to the Vizier and also to Courser of Kruphix, though. The price has stayed pretty stable so far:

With this card, I’m willing to get in at $13 for the FEA versions. The early demand is there, because the extra lands are good, and the option of the creatures off the top gives a layer to this creature and makes it worth a spot when you’re playing the best color in 100-card Magic.

That’s a card which has risen in price but has stabilized, and it’s super common in Standard right now. It’s occasionally found in Modern sideboards, but Standard is where it’s at for this card, and it’s got two years to be good. I wouldn’t be shocked if it crawled up to $10, and possibly higher if Standard comes back with a vengeance in paper, but for now I’m not buying. Speculating on Standard carries too many unknowns right now, especially with the uncertain number of players that can be playing tournament Magic at the moment.

Vanquish the Horde ($5-$11) – Out of the gates, this is competing for the most popular EDH card in the set. It’s flexible and powerful, and there’s no escaping it unless your opponents have the foresight to be playing the right versions of Sigarda or Tamiyo. Commander is a format where symmetric effects can be abused, and all you need is the most creatures in play to make this as good as Duneblast.

However, I can’t advocate buying in on a card whose price is still rising this way. It’s seeing light Standard play, and no play anywhere else. As the early adopters get their copies, the price will start to come back down. There’s an outside chance that some control deck takes over in Standard, but I’d rather put my money somewhere else.

Adeline, Resplendent Cathar ($3-$7) – The aggro decks are frequently playing the heck out of this card, because an extra token every attack is great! Turn three Adeline means your one-or-two drop gets a token, and then a kicked Adversary will give everyone an anthem boost. Gotta love aggressive curves, and the deck is solid for the next year. I think this is a buy, even as the price has gone up from under a buck to $3:

This has the potential to be $7 for the basic copies within the next couple months, and since it doesn’t rotate until late 2022, could get even higher.

The Basic Lands ($1-$3) – For almost all basic lands, I’m out. There’s too many cool things to choose from. I don’t want to be stuck with too many of one land when there’s new cool ones every three months, on top of the flood of lands coming out of Secret Lairs. If you want to play these basics, party on, but I’m not enthused about their growth potential. This is doubly so because of Double Feature bringing even more of these noir-style lands.

Siphon Insight ($1-$3) – If some flavor of Dimir or Esper control deck takes off, this is an amazing card in the color combination. You can play lands off of this, and it doesn’t take a lot of mana, and it’s an instant. These are all awesome things, and I’ll be keeping an eye on this card if Standard events start coming back.