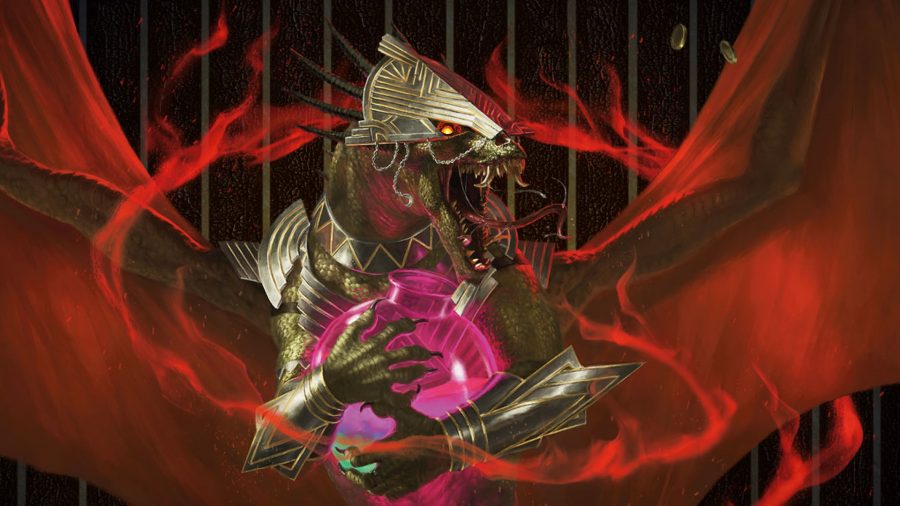 Update 4/29/2022: I’ve edited this to include the drops of New Capenna Commander cards in the last slot of Collector Boosters. Everything should be in multiples of 82 now.

Every set, Wizards is obligated to release a certain amount of information about the drop rate in the different booster products. They don’t want to be specific about things, though, so every new set, I have to look at the changes they’ve announced and figure out the odds of getting the cards we want in a Collector Booster.

It hasn’t been the same formula twice, and we keep getting variations. This time, the big news is the confirmation of a two-step process when determining how rare specific versions are. All versions of a card are combined to be as numerous as the total copies of another card at the same rarity.

So the total number of Extended Art Foil Luxior, Giada’s Gift (a mythic) is equal to the combined total number of Art Deco Foil, Phyrexian Foil, and Art Deco Etched Foil Urabrask, Heretic Praetor. As a result, each of those versions is three times rarer than the FEA Topiary Stomper.

The shorthand version is that first you roll your odds of getting any version of a card, and then you have to figure how many versions are possible for that card. I’ve done it all for you!

The slightly longer version, ignoring individual variations: If you want any card in any foil, looking at the last slot of a Collector Booster, you’ve got a 1/82 chance of getting it in a CB if it’s rare and 1/164 if it’s a mythic. Traditionally speaking, there’s twice as many of a given rare as there is for a mythic, so with 60 rares and 20 mythics from the main set, plus six rares and twelve mythics from New Capenna Commander, the pool is 2/164 or 1/82 for a rare and 1/164 for a mythic.

The annoying hurdle to this set is that you have to figure out how many options there are for a special frame. For some cards, there is only an EA version for you to pull. For others, you might have a chance at Borderless Foil, Art Deco Foil, or Etched Foil Art Deco.

I’m a completionist by nature, a trait which helps and hinders me, so I’m going to lay out your options by number of variants, then card name, then rarity.

First of all, the cards that are available at rare with one variant frame, so you have a 1/82 chance to get these exact cards/versions when you open a Collector Booster:

For reference, Jaxis, the Troublemaker also has a Buy-a-Box and Mysterious Limousine also has a Promo version from the Bundle, but those versions won’t pop up in the Collector Boosters.

Now, the list of mythics that have only one variation.

Just to be clear, there’s a Game Day Promo version of All-Seeing Arbiter, but we won’t see that in the Collector Boosters.

Now things get trickier. I’ve tried to break these rares into their combinations. I think I’ve got it right, but if you catch errors, please hop into our discord and let me know.

The frequency here is referring to any particular version. You still have a 1/82 chance to get any version of Brokers Ascendancy, but a 1/164 chance to get the Gilded Age foil.

Next, the list of mythics with two special frames.

Finally, the mythics that have three special frames. There’s no rares with this many, they max out at two.

We can compare this set’s rarest cards to the rarest cards of previous sets, because I get to do this every couple months:

That’s the general gist, but let’s talk about some card-to-card comparisons.

Your eyes do not deceive you: The rarest mythics in SNC are more than twice as rare as a blue Hidetsugu, and slightly rarer than the green version. Additionally, they are slightly more rare than the FEA Jeweled Lotus, and the rarest cards from modern sets have that 1/400 target in mind for chase versions.

I hope that this breakdown of the math helps inform your buying, and if you have questions or caught errors, please let me know on Twitter or in the ProTrader Discord! I’m happy to discuss methods and results there.