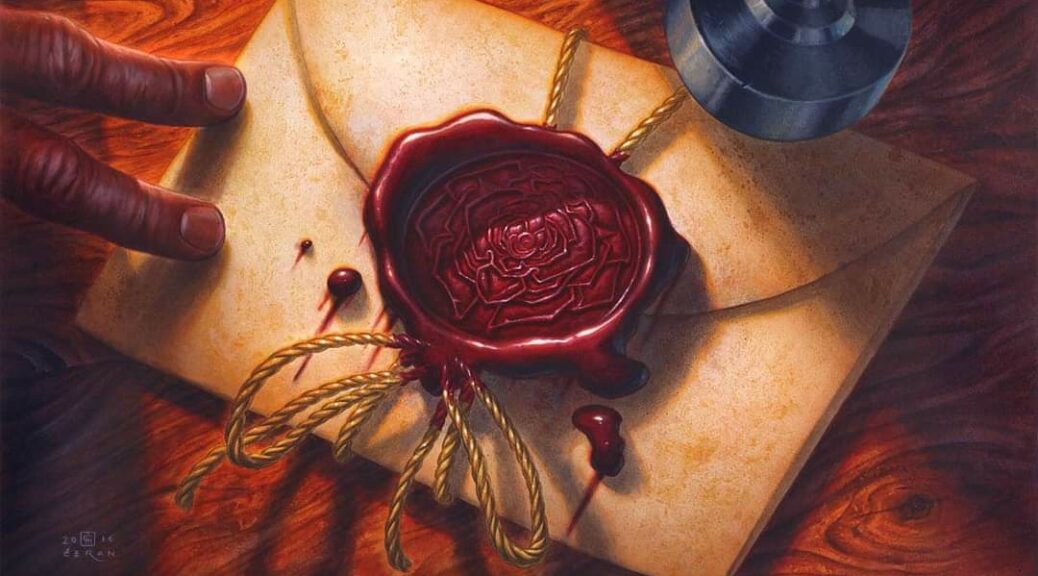 We’re a couple of weeks into Double Masters 2022 and prices are all moving downwards from where they started, and that’s good! That’s the entire point of the set, frankly, to put more copies in circulation and let people buy cards that they couldn’t have gotten before this reprint set.

One of the hardest things to do at this moment is to be patient. We’ve only had the set in hand for a couple of weeks, and while distributors are certain that we aren’t getting any more huge waves of product, we’ve still got a lot of packs left to open.

With that in mind, let’s talk about ‘the dead cat bounce’, and what it means to us as Magic speculators.

The phrase ‘dead cat bounce’ is a stock trading term, used to indicate a time where prices go up for a little while, even as the total trend is downwards. I think we are in the process of seeing this on Imperial Seal: 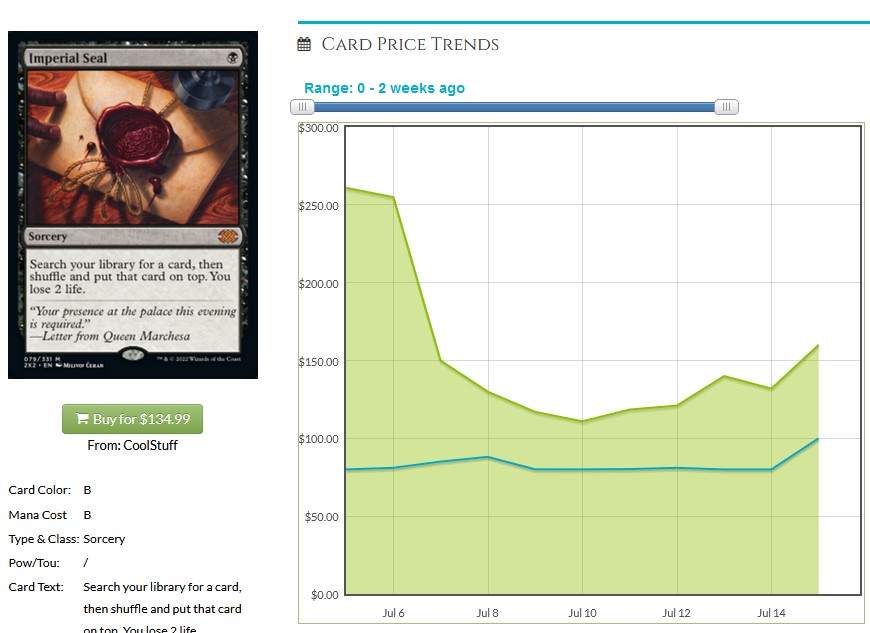 Yes, that’s a graph that’s trending upwards, but it’s also a graph that is only showing two weeks’ worth of data. Let me give you an example of this effect in a true staple, Doubling Season: 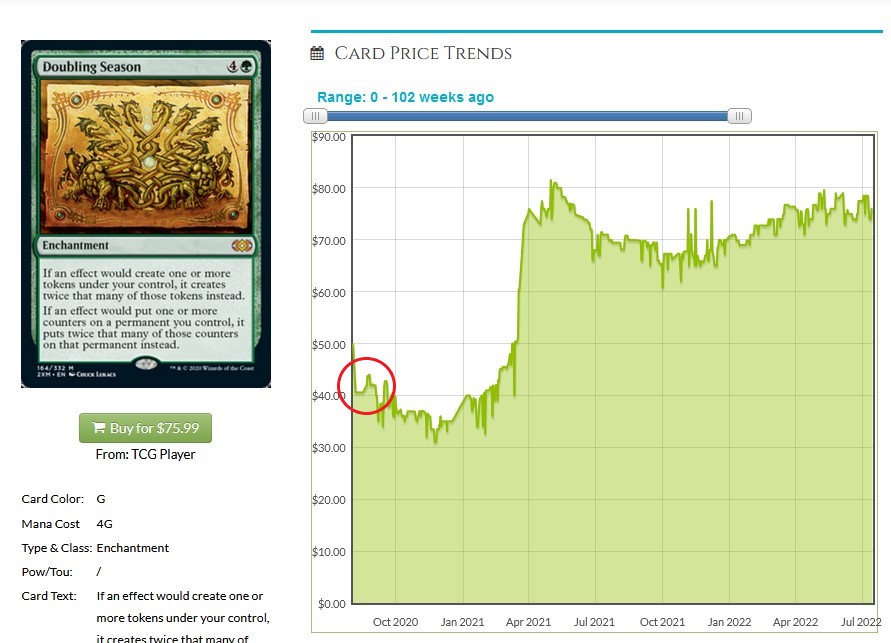 This is the Double Masters from 2020 edition, and you can see how the price has gone back up over time. The dead cat bounce is not the big jump in price just before April 2021. It is a small bump upwards at the very beginning of the graph. Let’s circle it, make it easier to see what I’m talking about:

Yes, that’s a small bump near the beginning of a big price graph, but this is what I’m talking about. A small upward trend in the midst of an overall decline. Let’s zoom in on the circled area, and see what the graph looks like.

So yes, it went up $5 in a couple weeks, and then down again, bumped back up, and within a couple of weeks was at $35 and at $45. Of course, because Doubling Season is its own level of staple, it eventually recovered and got expensive again.

My point here is that the graph for Imperial Seal is not something that makes me want to buy in. I said that this card would get cheap, and I still believe it will. We know exactly what the card is, and what the usage for it will be, as a second copy/strictly worse version of Vampiric Tutor. That card, amazing as it is and widely available thanks to Eternal Masters into Commander Legends, is in 145,000 decks on EDHREC, where the most invested players make sure to optimize lists and share them out. 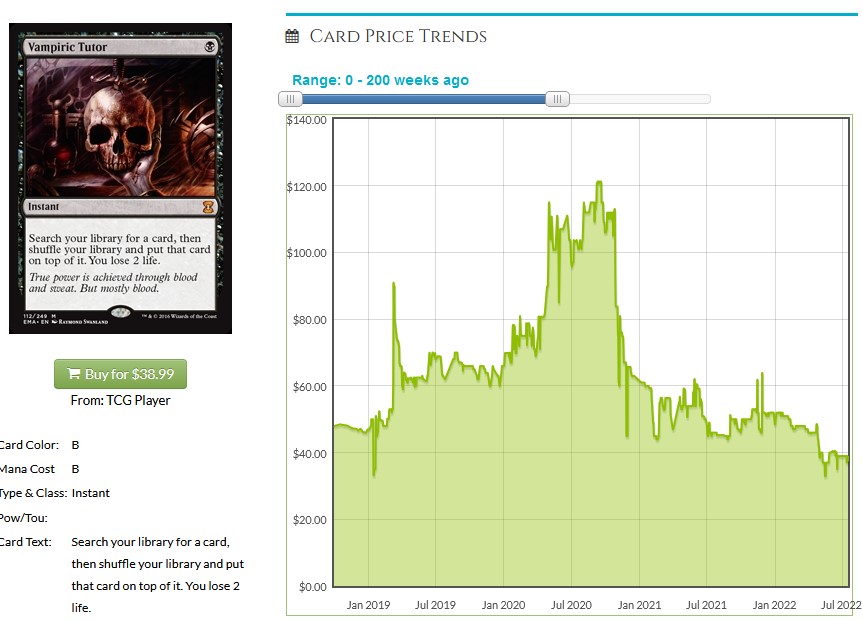 Because we’re all trying to make sure we buy copies before they get expensive, our very eagerness causes the Dead Cat Bounce. It’s not that Imperial Seal is three to four times better, but it is rarer. Seal is only listed in 28,000 decks, that’s a lot of people who are going to add Seal into their decks. That’s a lot of copies that never make it into circulation, and instead get put right into decks.

I still think Seal will go below $100, and possibly below $75, but every time we flinch and buy copies, it makes the decline take that much more time.

We can’t overlook price memory here either. This phenomenon has to do with a belief that a card is worth a certain amount, even if the actual price is different. Let me give you an example from early in my Magic career.

It’s 1995. I knew Ice Age would be coming out soon, though I didn’t know exactly when. There were no emails, no Internet, just Scrye magazine giving a price guide and vague release dates. Prereleases weren’t even a thing yet! So I stroll into my local shop and there at the front is a double-row box of Ice Age cards for a quarter each. I’m super stoked and start looking through these cards, thinking that I wanted to find new sweet cards for the decks I had, and there it is, staring at me: Counterspell.

To this point, Counterspell had been uncommon in Revised and earlier, but was something like $8 at the time. And here it was, mixed in with a bunch of quarter uncommons! So I frantically searched the box, and bought probably a dozen copies, all the ones I could find.

Then I went and found my gaming friends, and said, ‘Look! They mixed these with the commons! I just got like a hundred bucks worth of cards for three dollars!’ To which they replied, ‘Sorry, Cliff, it’s common now.’ So I bought cards thinking that they had the same value as what I remembered, but actually, the market and the new rarity had spoken.

I imagine there’s a lot of people out there thinking ‘Holy crap, this is a $1500 card and I can get it for $150!?! Take my money!’ and I get it, I do. But we have to compare apples to apples, not apples to previously gilded fruits of legend. We know that P3K reprints come way way down in price, especially on the second reprint like Imperial Recruiter did.

Warrior’s Oath is down to $20 or so, and given that Final Fortune is also $20, I don’t expect Oath to go much lower. I do expect that the recent minor upticks for prices in Phyrexian Altar, Smothering Tithe, and other staples doesn’t reflect the final price that those cards will be at in a few months. Be patient, as hard as it is, and you’ll get your value.