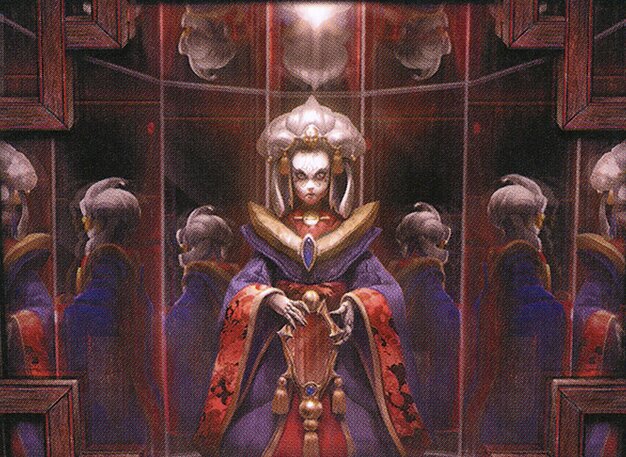 I have written about how in the last couple of years, I’ve gotten burned pretty badly by moving in too soon on cards I want to spec on. It used to be a three-month timeline for cards to find their floor, but now it’s more like six months.

With that in mind, let’s look at a few Kamigawa: Neon Dynasty cards and dive in on a couple of bricks. For the most part, I’m hoping to buy at least several playsets, with the intent of selling them all to a buylist when the prices go up. Yes, you get less money per card, but when your profits are already solid, you get a good return and save a lot of time and energy on the shipping.

I don’t like to buy these sorts of cards in small quantities, I’d much prefer to take down a big wall all at once. If you’ve got the patience for opening all the envelopes, go for it.

The primary metric I want to use is EDHREC inclusions, because most of these cards haven’t been in preconstructed decks. These numbers are the tip of the iceberg, coming from the most connected and optimizing players, but it’s good to know what people’s favorite cards are. Commander is the main engine of value these days, but if a card has a lot of Modern or Pioneer play too, that’s a lovely bonus.

I want to make clear that for most of these, I want the cheapest versions, unless the more premium printings are also quite cheap. In some cases that’s possible, and in others it’s totally farfetched. Also, I haven’t bought any of these yet, just for full disclosure.

The Channel Lands (cheapest is $2.50, most expensive is $63 for Borderless foil) – By far the most popular EDHREC inclusion is Boseiju, Who Shelters All, in 61,000 decks online, and the price chart shows a remarkably consistent price for an in-print rare land.

The lands are the most popular cards in the set, with Farewell being more popular than Eiganjo and Sokenzan. It’s not hard to see why all five are so popular, the effects are good and worthwhile and are difficult to counter.

The only thing holding me back from a big purchase of any of these is that the full cycle is an excellent candidate for a future Secret Lair. That set wouldn’t hurt too bad, as we’re getting in at good prices, but it would take that much longer for the regular versions to get there as a result.

Secluded Courtyard ($1 to $7.50) – The most expensive version of this is the Promo Pack version, which has the Planeswalker symbol frame, but this land is strictly better than Unclaimed Territory, a card in more than 66k decks and has been reprinted several times. Courtyard is in 23,000 decks and again, we’re weighing reprint risk. This is absolutely an uncommon that can make it to $4 retail, giving us a profit of $1-$2 per card when selling to a buylist, but inclusion in a preconstructed deck would sting and slow it down.

Going after the more premium versions is safer, but more expensive to start with. Those are probably the safer play, but require both more capital and more time to open the singletons you’re sent.

Farewell ($6.50 to $17) – The most popular nonland from the set, this ‘best board wipe ever’ is already expensive from being in 44k decks online. It’s not hard to see why, given the modular nature and the exiling. This is tough to evade and especially for annoyingly recursive decks, represents a total shutdown.

In fact, it’s entirely possible that we’ve already seen the floor on Farewell and it’s only going to trend upward from here. I want to be in on the basic versions, with a greater percentage in growth over time.

The Reality Chip ($2 to $9) – The foil Showcase version of this is already pretty expensive, but the foil EA can be had for close to $4 if you want a more premium version with less of a buy-in. This is a phenomenal card advantage engine, and is even showing up in Modern as a one-of in some Hammer Time decks that tutor it up with Stoneforge Mystic.

More than 16,000 players have listed the card in their decks, and with a price gap like this, I really want a brick of the most basic versions. I’d be looking to get $4-$5 per copy from a buylist within a year.

Atsushi, the Blazing Sky ($5 to $22) – Almost exactly 16,000 players have added this to decks, and not all of them are Dragons players. This is quite a deal at four mana, and you almost want it to die to effects immediately. In this case, I’m most likely to look at the Borderless foils and hope for an increase to $40 or $50, and that feels pretty reasonable when you remember how many NEO Collector Boosters needed to be opened to get one of these.

It also helps that right now on TCG there’s only one person with four or more foil Borderless versions, and only about 100 copies total.

Mirror Box ($1.50 to $4) – If you’d asked me how many decks played this card, I wouldn’t have guessed this was the 12th most popular nonland from the set, put into 10,000 decks in the last six months. People absolutely love copying things, though, and Mirror Box enables a very high level of shenanigans. It’s also handy for a boost to all the things you’re playing, and if you copy something multiple times, the boost really grows. There’s a case to be made for any of the versions, but given the higher quantities you can get of the regulars, I think that’s where I want to be.

Don’t forget that buying all the copies someone has of a card can really lower your cost per card if they went low on price but high on shipping. Here’s an example, from regular frame, nonfoil Mirror Box:

The first vendor, you can get four copies for $10 or six for $15. The second vendor lowered prices but has a higher shipping. If you buy all eight copies, you’re spending $9.75, basically getting two free copies compared to the first vendor.