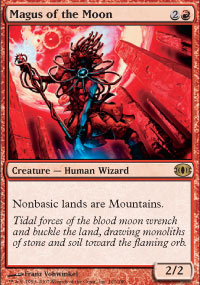 Today is going to be something a little bit different. Rather than focusing on a single main topic, we are going to do something in between that and quick hits. The main advantage to this format is that it plays into my attention-deficit diso-*logs onto Hearthstone*.

Two Different Spikes: There were two spikes this week (at least as of me writing this- Wednesday morning). The first was a prime example of an artificial buyout; foil copies of Retract skyrocketed overnight. The pucatrade value increased to roughly $80, and according to the pricing app I keep on my phone, that’s a steal. 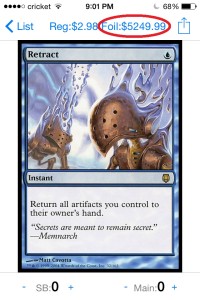 There are some telltale signs that this is an artificial spike. First and foremost, it is important to know where the card fits- Retract is only played in one deck (to my knowledge), Puresteel Paladin Combo. The characteristics of the Puresteel deck are also indicitive of an artificial spike: it’s a fragile combo deck that goldfishes well and (with the exception of Mox Opal) is pretty easy to put together (and therefore easy to foil out). The person(s) behind this spike saw a lynchpin card in a combo deck that was last printed in Darksteel and isn’t likely to be reprinted anytime soon. The irony, of course, is that Retract is infinitely less important than the deck’s namesake, Puresteel Paladin- Retract can always be replaced by Hurkyl’s Recall in a pinch (it’s definitely suboptimal, but going from 1 mana to 2 is better than replacing Puresteel Paladin with Vedalken Archmage). This deck had a good finish recently (according to the deck tech that I linked to), but it is a lot like the Amulet deck- it can have a good finish when a player who knows the deck like the back of their hand gets hot on the right weekend, but this is not going to be a significant percentage of the environment moving forward. Honestly, it looks pretty sweet, and Puresteel Combo lists have been floating around for a while now, but this a deck only a speculator could love.

The second spike was much more sobering. Blood Moon looks like it is going to settle around $50 for most versions, and I honestly can’t say I’m surprised. If you read last week’s article (of course you did), then you know that Blood Moon falls squarely into one of the camps of cards that WotC’s developers are hellbent of keeping out of Standard (and would like to push out of Modern). Blood Moon, unlike Retract, sees play in multiple archetypes in both Modern and Legacy. The card is also an enchantment, which is a very hard type of permanent to remove when your lands can only tap for R. The scariest part is that the two most printed versions of this card were very likely Chronicles and either Modern Masters 1 or Ninth.

I mentioned Magus of the Moon a few weeks back, and it seems like this is as good a time as any to thoroughly evaluate the pros and cons. Unlike enchantments, red is very good at killing small creatures, which Magus of the Moon is. When the 8 Moon decks were in standard, some of the (what we would now call) Esper Control decks would run some burn spells in the sideboard to kill off Magi. It wasn’t the most elegant solution, but it was pretty poetic. Something that is important to understand about Blood Moon (the effect), is that if you don’t have any sort of threat, then just casting the card isn’t going to win you the game. I’ve seen a lot of people cast a Blood Moon and just expect the game to end — only for their Tron opponent to make every land drop, play a Wurmcoil, and lock up the game. The upside to Magus of the Moon is that he is able to swing for two, and can at least apply some pressure until you’re able to find something to close it out.

It’s worth mentioning that I played a lot of 8-Moon in standard, and the deck really wants the redundancy of playing eight copies. The conventional wisdom is that “if you want to see multiple copies of a card in a game, play four,” but the real answer is “play eight.” For critical effects (playing a mana dork on turn 1, or a Blood Moon on turn 2-3), you typically want all eight, although the math is not that much worse if you go to seven (which I typically prefer when talking about mana dorks- that extra slot can be a finisher instead). Even though Blood Moon is viewed as a sideboard card, I think people are going to realize that it is good against so much of the field that the technology will transition into something like the old 8 Moon lists.

I made Chicken and Waffles for dinner the other night: and it was really good. Just thought I’d share.

Kolaghan’s Command: This card has gone from bulk to $6 in an impressive amount of time. When I wrote about the Commands way back when, I said that Kolaghan’s was the toughest to evaluate because it is so much more contextually dependent than the others. The card is certainly strong, it’s just costed one mana too high to be truly great. Dromoka’s and Atarka’s Commands are both insane, and a big reason why is their cost. The two mana Commands will be Standard staples for their lifespan, and both will find homes in Modern, Kolaghan’s Command is a maybe (but has stiff competition from former stud Blightning), and the other two won’t make the leap. There will be some market for foils of all five in Cube/Commander/Casual crowds, but not enough to lift the lesser ones from irrelevancy. I don’t feel safe buying Kolaghan’s Commands right now, but when Magic Origins comes out, the price may drop to $4 or less: that’s the time to snatch up an extra set or two if you think you’ll need them.

Spellskite and Noble Hierarch: I am going to be looking to buy these by the gross pretty soon. They fit in a lot of different decks, so I expect their prices to rebound more than something like Fulminator Mage, which is expensive, but also basically a Stone Rain. The trick is to find cards that are good in multiple decks, because a bigger pie-slice of players will want them.

Modern Masters 2015: Stores are getting opportunities from Wizards to reorder product, which didn’t happen last time. Granted, it’s not a full reorder, but it’s something. It will be interesting to see how many more of these opportunities stores are given, since absolutely nobody is going to say no. I’m a little surprised that more MM1 hasn’t started cropping up, given how much the distributors (supposedly) have ferreted away.

The Wild West Days of Modern: are not going to last forever. Eventually Wizards will have reprinted enough of the format to start to assuage demand, and I have to assume that the player growth booms of the last few years will begin to plateau. I don’t think there is a single Modern card I have faith in five years down the road, which is both good for the game and bad for hobbyist financiers/”speculators”.

The only thing that scares me about the future of Modern, however, are things like Blood Moon, that clearly don’t fit in the modern (lower-case ‘m’) development philosophy. Think about something like Candelabra of Tawnos in Legacy — there are so few copies of Candelabra in existence, that you could play in Legacy events for a year and never have to worry about it. Of course, there is only one Legacy Grand Prix in North America (or Europe or Asia) every year, so you’re typically JUST playing Legacy for cash prizes- not to try and climb a tournament ladder. If WotC manages to “push” something like Blood Moon out of the mainstream in Modern, without banning it, then it’s going to create a weird subset of Modern decks that will be similar to the “niche” decks in Legacy (like Candelabra decks).

I know there has been a lot of forum talk about Abrupt Decay, and I think the day it gets reprinted will be the unofficial end of Modern’s boom phase.

Abrupt Decay: would make a good GP promo, for what it’s worth.

The possible end of Community: was very heartfelt and bittersweet. I love that show, and can’t wait for the movie to come out. The tags at the end of the episodes this season were insane.

7th Edition: is seriously an interesting set. So much of the art that was commissioned hasn’t been reused, and the fact that the foils are black bordered in the old frame really scratches an itch for the die-hard collectors. The only problem is that the set isn’t Modern legal, so you need to make sure that you double check the legality of cards before you pounce on them (the set has a lot of those color hosers we mentioned last week). There are TONS of foils worth $3 or more, and stores are actually buying them. Pacifism, a card that is reprinted CONSTANTLY, was at one point $9 for a 7th foil version. 7th Edition foils exist as this strange wormhole where they are sometimes the most unique version of a card possible. Although the price pretty much mirrors other foil copies, the 7th Edition foil Evacuation features unique artwork (and old frame). Sustainer of the Realm, an unplayable uncommon, is $15 for 7th foils, and under $2 for Urza’s Legacy foils (which may be a steal, when you think about it). Multi-format staples like Birds of Paradise and Wrath of God are worth over $100 for 7th foils, which is pretty much the best you can do before venturing into foreign foils or Alpha/Beta. Static Orb, a card that is played in nothing but the past, is buylisting for $21 and retailing for $25!

The last I’ll say about 7th Edition foils is that I’ve looked at a lot of price charts for individual cards, and their buylist prices have almost all gone up over the last year. This is worth a closer look, and I expect the forum discussion to be lively.

I’m super excited: about the Fantasy Football league we have brewing in the forums. We’ll have to set up a league and draft soon. I know it’s a little hokey, but I like doing it on NFL.com, because they have a lot of cool bells and whistles, and they do that very professional-looking “draft analysis” at the end.

I’m playing Abzan Aggro in a tournament tomorrow: and I really like the deck. I went up to the full four Dromoka’s Command main, and all I keep thinking is “why the hell didn’t I do this sooner?”. Obviously their futures aren’t the same, but the last time I said that, it was about Jace, the Mind Sculptor. Nothing else in the list worth mentioning, aside from two Pitiless Horde. That card is good too, just not as good as Dromoka’s Command or Jace.

I have a secret project: that I am very excited about.

Tarmogoyf: is probably not going to get below $100, but hopefully some day. I really wish they would just go ahead and put him in a “real” set- he’s honestly not THAT good. Even though I profitted on selling all of my Goyfs forever ago, I’m definitely feeling the sting of not having access to any now. Oh well, c’est la vie.

Next week: we will finish the Mirrodin block with Darksteel and Fifth Dawn. I know, I’m excited too.

Tell me in the comments: if you liked this format. It won’t be an every week thing, but sometimes. Also, tell me your thoughts on Community. I think my favorite episode this season was the heist one.