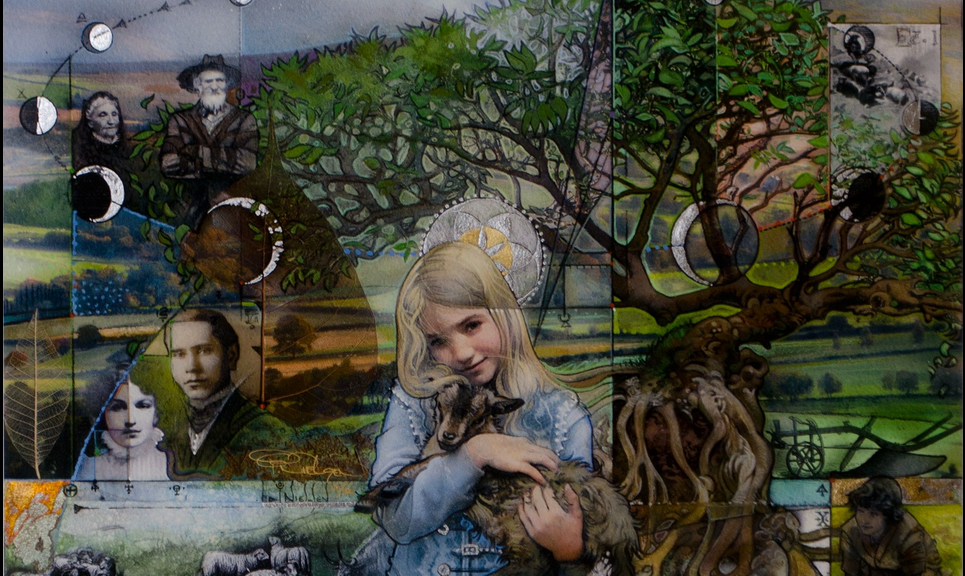 First of all, Happy Father’s Day to my dad and all the MTG Dads out there!

One of the themes of this game is that it grows when we teach someone how to play it. Some people never find a teacher, they learn via Duels of the Planeswalkers and then Magic Online, but most of us learned from one person or a group of people, others who enjoyed the game and cared about it enough to spread it.

For a couple of years now, I’ve had one thought percolating in my head: How am I going to teach my two daughters how to play? When should I do it?

More recently, the thought has switched: Should I teach them?

My daughters are both under the age of three. This is not a question I have to answer soon, but I have two very conflicting views.

Personally, Magic has been amazing. I’ve met new people, I’ve had financial success with the cards, and there’s been countless hours that were just fun, because of this game.

But there’s a side that is more worrisome. Think about the last FNM you were at. Perhaps it was a Grand Prix, or an SCG Open, or a TCG Diamond event, or any Magic tournament. How many people there acted like winning at Magic was the defining quality of their worth as a person? If they won their match, the feeling was that they were the best in the world, the master of all they surveyed.

If they lost, they went on a tirade against luck, against the winner’s poor play, against the air conditioner working too well or not enough, etc. Maybe they look through the match and say “Of course they had a counter/pump spell!! How could I have missed the signals!?”

How am I going to teach my daughters to play this game that I love so much?

Should I teach them? I’ve been thinking a lot about whether I should, because there is a significant number of Magic players who will look down on them for being female. I’m not trying to shame anyone, but let’s be realistic: You likely know someone who takes a loss harder from a woman than they would from a man.

My wife plays Magic, and I’ve seen the reactions of people who are seriously overreacting to losing to her. Would they be as salty if they had lost to me and not to her? Will they attribute losing to me as a lack of skill, whereas my daughter winning will be a matter of bad luck?

Let’s be honest for a moment. You probably know someone who, if they sit down to play a woman in a Magic event, they think, “I’ll beat her easily!” You might even have had this thought.

In all honesty, I have had those thoughts, to my everlasting shame.

I’ve been at enough events, large and small, to hear the talk and catch the conversations about how women there look. I’ve heard the derogatory comments and the snide remarks.

I’ve said nothing. By remaining silent, I’m contributing to the problem.

When you got ready to attend a large event, did you think about your makeup? Did you have to devote time to fixing and maintaining your hair? Were you forced to wonder how many of your opponents would be looking down your shirt?

It’s not acceptable to presume anything based on a person’s appearance. Someone at a Grand Prix wearing sweats and flip-flops isn’t automatically going to smell bad and have limited social skills.

I’ve seen women who don’t want to be involved in the game but are still present, and I wonder how many men would do the same. Which of us would go on food runs, would sit by silent but supportive, who would sacrifice what they want to do in order to be there for a game they don’t understand to be played with people who can be quite unpleasant.

I think that a lot of people, myself included, have taken the ones we care about for granted, and that’s something we should all reflect on.

I want my daughters to take as much joy in this game as I do. I’ve found some of my best friends through Magic, I’ve survived moves and other upheavals thanks to finding a new store to play at. I want them to develop a sense of confidence and insight by playing, just as I have.

But how do I do that?

For all that Magic has an awesome community, there are large and small forces at work. Body shaming is a thing, from taking pictures of buttcracks to a vicious set of Twitch comments about the winner of an SCG event. Even if those aspects are gone by the time my daughters are playing, how many gamers presume a level of inability from females?

Should I even worry about what those gamers are thinking?

At a store I used to go to, there was a man whose two children, a girl about eleven and a boy about eight (I think those were their ages, and if I’m wrong, I apologize) would be 3/8 of the draft pod. I would look at them and think of other activities I did and didn’t have with my family. How marvelously lucky he was, to not only play an awesome game, but to share that experience with those he loved most in the world.

My wife says I’m overthinking this. I want to shelter my daughters from even the spectre of negative experiences. Intellectually, I know I can’t spare them from the pain of the world, but that’s not the point.

She also points out that I wouldn’t be having the same set of worries if I had two sons instead of two daughters. She’s absolutely right. By thinking of my daughters as girls to be protected, I’m feeding into the same erroneous line of thinking. I would probably not be concerned for their mental state or their emotional health if they were boys. How ancient of me.

God help me, I’ve got enough anger issues to think about when it comes to my children. I’ve played out in my head what I’d do the first time some overbearing and belligerent jerk called out an error from my daughter and mocked her for it. Table-flipping may be an option.

What’s a father to do?

There’s always the option of letting them do the things they want to do. Ideally, I don’t even have to try to make it interesting to them. I’m a teacher; I know that trying to force interest onto a child is not going to go well. They just need to see my wife and I enjoying our games and they will follow along.

Maybe I’m just scared of all the things I don’t know.

Before I met my wife, before I had two beautiful yet frustrating children, I was really good at Magic. I was drafting twice to three times a week, all in person because I swore off MTGO. (50,000 cards that I have no hope of ever using or trading!)

This was way back, during Zendikar block. ELO ratings were the norm. I made the top 8 of a Zendikar sealed PTQ by maindecking Tajuru Archer, that silly ‘deal damage to flyers’ Ally who always killed turn two Welkin Tern. My rating was hopping between 1850 and 1900, and I was proud of making the top 100 in Limited play in my region.

None of that mattered when I met my amazing wife, or when my children came along. I left that area, and a vibrant Magic scene, because my family was more important.

I constantly wonder about the home lives of pro Magic players. I know, for instance, that LSV has a wife and a day job, and that he’s able to travel to PTs and events and such with extra time for testing and planning. It’s not like the pros are all solitary hermits; they do have families.

I wouldn’t enjoy such separation, even with a top prize of $40,000 on the line. I can’t believe how much I love the stupid and silly little things about being a dad. The youngest is just starting to eat solid food, and she immediately groks how to use a spoon, causing my wife and I to grin at each other like loons.

I anticipate these little things and when they arrive, it’s like wheeling a card I wanted to first-pick..except it is far, far better. My daughter climbs up the slide, then turns around and sits down, sliding back down the way she came, and the only one happier about it than her is me!

Compared with that, hanging out in a giant hangar with 2,000 other gamers playing for a max prize of $4,000 (before taxes) isn’t that important.

I wasn’t prepared for how efficiently my brain rewired my sense of what is and isn’t important. Magic was paramount. And then, without fanfare, it wasn’t. I never had to choose between them. I wanted the time with my wife and my kids. Sure, I want to play more, but it’s the dessert now. It’s no longer all-consuming.

My wife is going to read that last sentence and laugh. I listen to podcasts, I write weekly, I trade cards online, I watch Magic matches on Twitch and Youtube whenever possible.

I might not play it as much, but Magic is still a big part of my life.

I am certain that my daughters will at least learn to play. I have a battle box in mind, a rough outline, but I won’t need to build it for a few years yet (and there are years of cards yet to be released!) so that’s not an immediate concern.

I do not believe that they, or anyone else, should have to tolerate foolish behavior from gamers of any gender, creed, or belief. It’s taking me years to clean up my language and my behavior, because they don’t yet understand how people can have different personalities depending on who they are around. You don’t need to hear specifics on how awful I can be, but I’m trying to be better.

What I am going to do, and what I’m asking you to do, is to make sure that when you play, you be competitive as the setting calls for, as serious as you want to be, without going overboard. I’m not asking you to just be nice to younger players, as that’s quite condescending. Magic’s competitive history is replete with examples of teenagers taking down big tournaments.

I’m asking you to treat your opponent, or your trading partner, or anyone, with the decency you would want given to your family, your loved ones, your children. Don’t presume anything about the other players. Don’t let your own issues override the enjoyment that someone else is seeking. It’s possible to lose and still have a good time at the event.

I am also asking you to tell people, especially your friends, when they are going too far. Call a judge when someone in a game is derisively snorting at a player’s mistakes. Tell your friend that yes, he’s being an asshole and that he needs to tone it down.

Magic is an easy game to lose at. Don’t make it a game about losing in life as well.