In recent weeks I’ve dwelt on general finance strategy as we navigate this turbulent Modern season. I suggested trading out of Modern staples as they spike and acquiring some higher end, safer MTG investments. I also touched upon my emotional rationale for abandoning Modern – at least in the short term – to move into a format I am more excited to play.

I had planned on writing an even more bearish article about Modern this week. In fact, I was planning on making the bold claim that Modern was at a local “top.” Prices are destined to fall from here, right?

Except that MTG Price writer Travis Allen already did this. Right here. For your convenience, here’s the excerpt I’m most interested in:

“…while conventional wisdom seems to be that competitive seasons cause price movement, our evidence from last year doesn’t support that, and neither does the evidence this year. Last year, it seems that all of the spikes happened ahead of a GP, and then either remained stagnant or even fell after the fact. This year, we’ve seen a truckload of price spikes…

What’s our takeaway, then? Well, if history is any indiciation, it’s that we’re sitting at the top of the market right now. Modern staples will generally remain stagnant or even decrease in the next four months.”

YES. Very yes. I applaud Travis for sharing his bold and potentially unpopular opinion that Modern has topped. Frankly, I couldn’t agree more.

Let’s assume you’ll consider what Travis has said, and that you’ll sell a lot of your recently inflated Modern staples. You know the ones I’m referring to: your $90 Snapcaster Mages, $50 Blood Moons, $15 Serum Visions, and $5 Lantern of Insights. 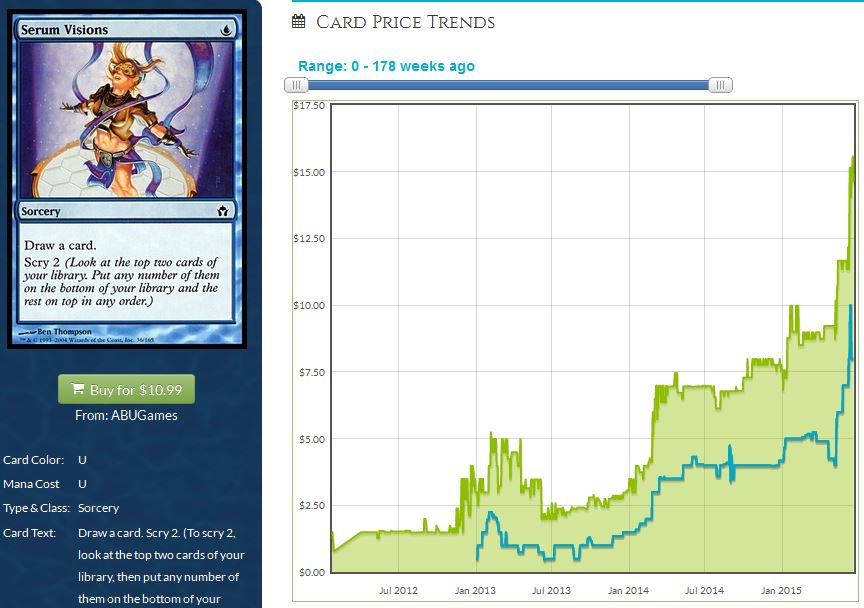 The decision to sell cards like these would generate a sizable cash position. So what do you do with all these newfound profits? Sitting on cash seems miserable, so there must be a better place to park resources right?

Well, you could try and acquire Modern staples which haven’t spiked yet. I can think of a few viable examples: consider Tendo Ice Bridge, which is already practically sold out across the internet (Disclaimer: I have 1 copy listed for sale at an artificially high price in case this spikes). 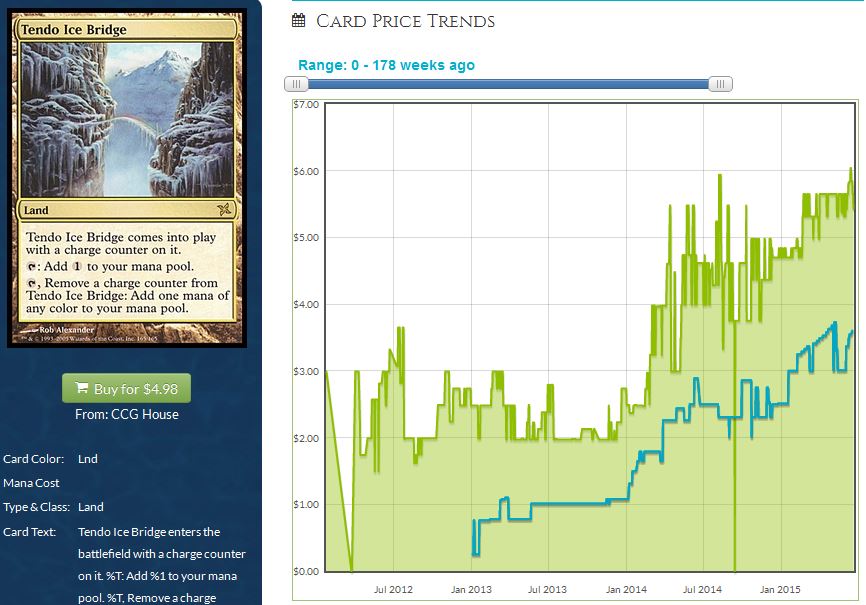 Worldspine Wurm is another example. The card was a four-of next to Nourishing Shoal in the creative reconfiguration of the Goryo’s Vengeance strategy.  While Shoal went from $0.75 to $15, the Wurm barely moved a muscle. Guess which one is likely to have more casual appeal, by the way. 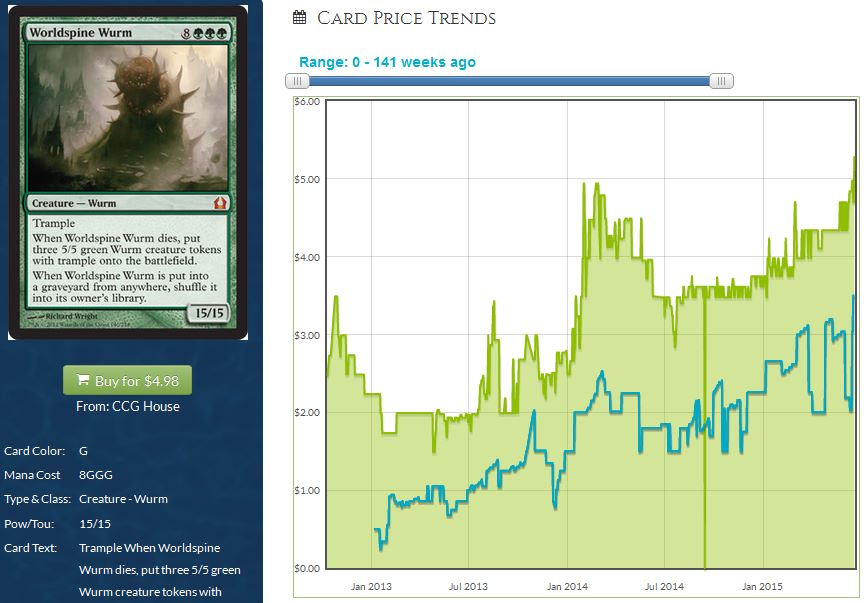 Despite these and a few other ideas, I don’t believe Modern is where you want to invest your recent profits. Even if these ideas do move higher, they’ll be facing headwinds all summer as the format quiets down. Better opportunities exist. I can think of lower risk propositions with immediate upside potential. In fact I can think of a number of ways you could apply some capital and generate immediate returns even by buy listing, and it doesn’t require collection buying.

It’s All About the Benjamins

I enjoy relating MTG Finance to stock market investing. I detect many parallels between the two, despite some dissonant opinions amongst the community. At last, this knowledge may provide actionable benefit. It all relates back to the strong US Dollar.

Actually, strong is an understatement. CNBC icon Jim Cramer prefers to refer to our currency as the “Super Freakin’ Strong Dollar”. As ridiculous as that sounds, it’s probably a more accurate statement. Here’s why: 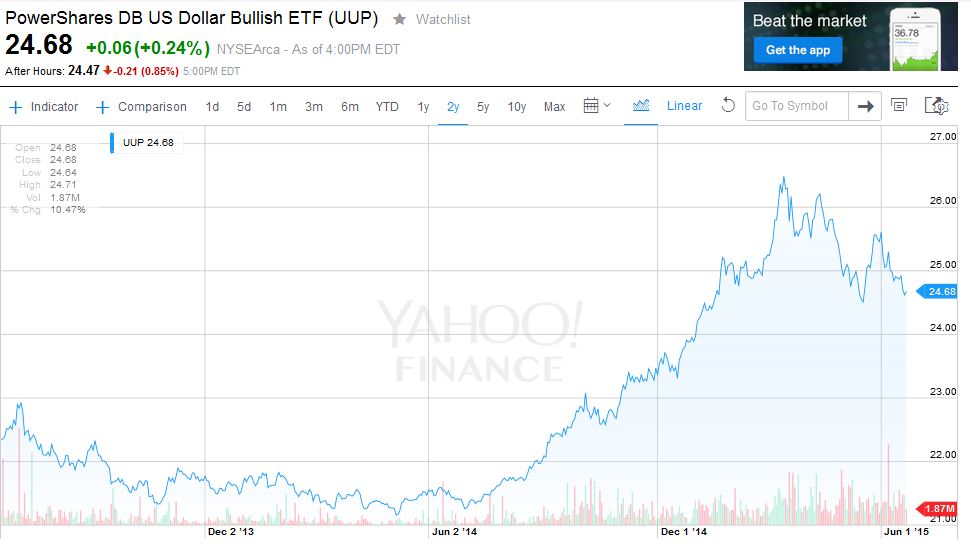 Since mid-2013, the US Dollar has been on an absolute tear jumping in value by 15-20%. This, paired with recent weakness in the Euro, has led to some very favorable exchange rates for the arbitrage seeker.

The result: cards – especially high end cards – for sale in international markets are now more attractively priced. While the US Dollar has pulled back from its highs a few months ago, those in the U.S. still have a clear advantage.

I have a couple specific examples I can share.

First, if you have a friend you can trust in Europe then I’d highly encourage you to explore Magic Card Market (www.magiccardmarket.eu). Through a quick search, I readily found an arbitrage opportunity with Beta Scrublands.

One seller has a NM copy listed at 599 euros ($680 USD). If truly Near Mint, Star City Games will buy that same card from you for $900. Card Kingdom would even pay $910. I’m confident there are many other opportunities on the site if you’re willing to spend some time searching. I’d recommend looking at other high end staples such as these.

Don’t have a friend in Europe? No problem! Today your US Dollar can purchase more Japanese Yen than any time since 2011! 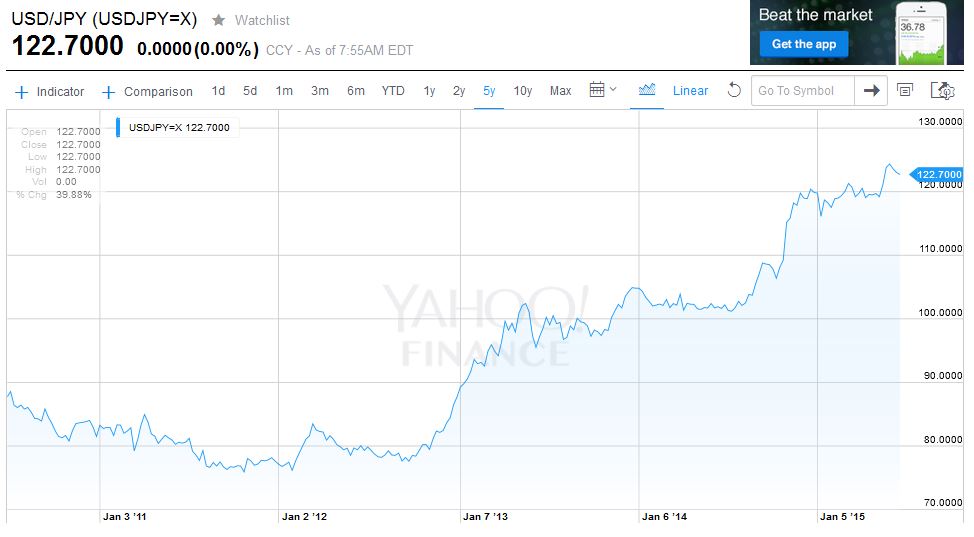 The implications to this are huge, if you are willing to buy from Japanese vendors. The good news is many Japanese vendors will ship directly to the U.S. One site I would immediately trust is Saito’s digital store front, http://www.hareruyamtg.com/en/.

Again I would recommend browsing some high-end cards, though I suspect with the currency conversion so favorable there are numerous opportunities across all formats. Through a recent search, I found a sweet arbitrage opportunity: 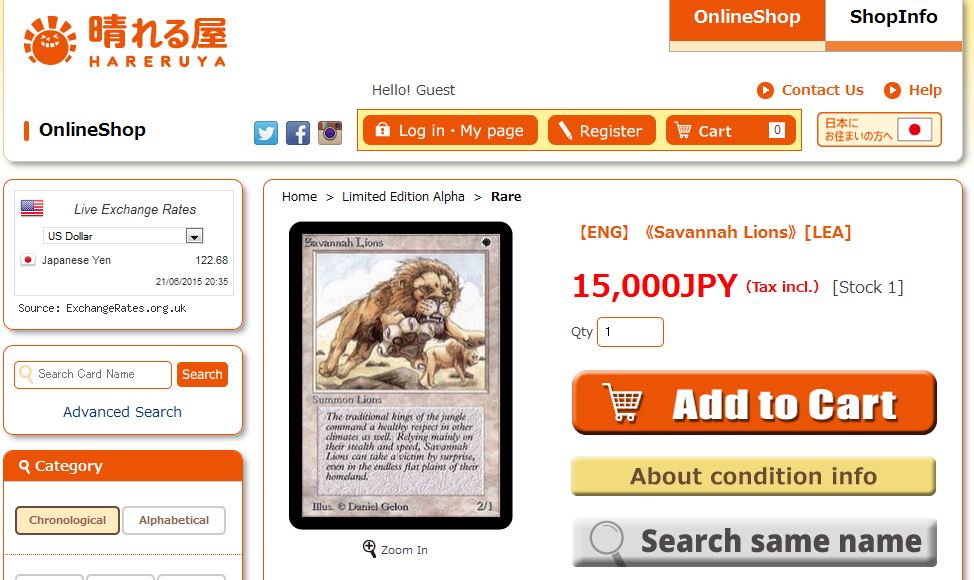 Using the exchange rate Hareruya generously provides, you can purchase an Alpha Savannah Lions for $123 + shipping. Channel Fireball is paying $125 for the same card, and Card Kingdom is paying even more: $135. In this particular example no immediate opportunity exists. Shipping will cause this deal to fall short of immediate profit (though I have requested scans of the card – it truly looks Near Mint). But there is a right to succeed here. I know of a few other solid opportunities on this same site by simply running searches. Putting together a larger purchase could help you overcome shipping costs, enabling arbitrage or, at the very least, very good deals!

I must acknowledge this article is highly geared toward the US investor. In reality, there are opportunities for everyone to get involved. People in Europe can engage with those in the U.S. to help identify opportunities in the European market. The same goes for those in Asia who have access to the Japanese market. We can all work together and benefit from the gap that exists across continents.

I would also be remiss if I didn’t at least briefly touch on the risks associated with this endeavor. Shipping costs and condition are a huge factor – it’s not cheap to move cards over oceans, especially in quantity. And although a picture is worth a thousand words, it could also cost you a thousand dollars if it’s not high enough quality, causing you to mis-grade a card before buying. There are also currency conversion fees you need to consider. These are all powerful reasons for why opportunities are still aplenty. The risk is sizable and real. But so are the opportunities.

And if international deals aren’t your forte, consider some local “arbitrage” opportunities. High end cards can be very difficult to price correctly if you’re not heavily involved in this space. By searching one of the billion MTG Facebook groups, you may come across a steal. 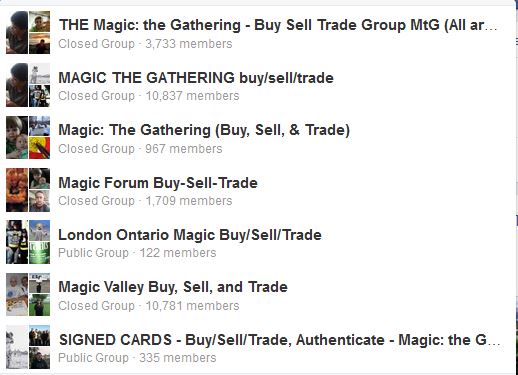 A friend directed me to a particular Facebook group focused solely on “sick deals”. That’s right – you can’t list a card for sale in that group unless you’re at least 10% below eBay / TCG low pricing. 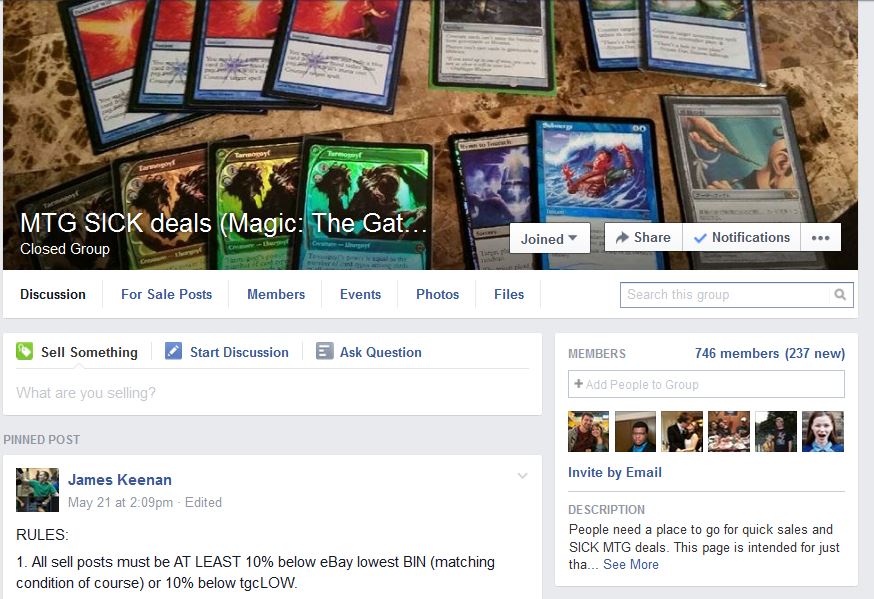 Check out the website www.fatfingers.co.uk. This website allows you to search every country’s eBay site for common misspellings of eBay listings. I was skeptical at first, until I tried it out. Believe me when I say, this site works. 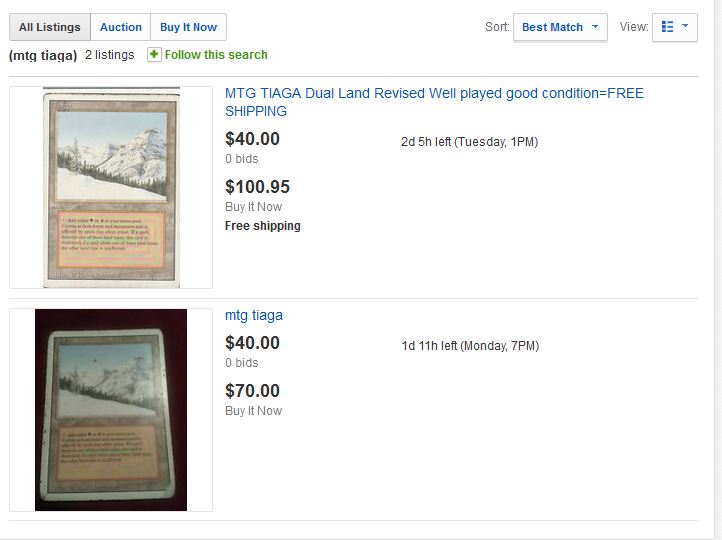 These Taiga prices may not be the most attractive, especially given their poor condition, but the proof of concept is still there. Notice how both these listings currently have 0 bids? That’s probably because only a handful of people have actually seen these listings. If nothing else, the site can be very entertaining – you’d be amazed at the many ways some of these Magic cards can be misspelled!

With spring’s Modern GP behind us, perhaps we are once again seeing a peak in Modern staples. If this is true, the time to sell could be right now. I have been moving out of Modern very actively in recent weeks, putting my money into older, more stable cards. If history repeats itself, we could see a price bump on stuff like Dual Lands and Legacy staples later this summer or early fall. And even if we don’t see a sudden spike, these are still very solid cards to park your money. You could do much worse with your recent profits.

If you feel like trying something new, give a gander to the websites I mentioned above. The strong US Dollar can drive some very attractive deals on international sites – especially in Europe and Japan where currencies are particularly weak. While I haven’t pulled the trigger just yet on these opportunities, I have been watching them closely in recent weeks. Once I accrue some additional capital I just may make my move.

Just proceed cautiously, as there are risks associated with buying internationally. Fortunately those risks can be reduced by placing larger purchases to overcome shipping costs, and asking for card scans before buying. Using common sense, you should be able to navigate the pitfalls of international buying, leading you to profitable arbitrage opportunities. At the very least, consider international shops (even just north of us in Canada) when looking for attractive prices driven by currency exchange.

And if you insist on staying domestic, give the Facebook groups a try. You never know what deals you may discover.

6 thoughts on “UNLOCKED PROTRADER: A New World of Arbitrage”