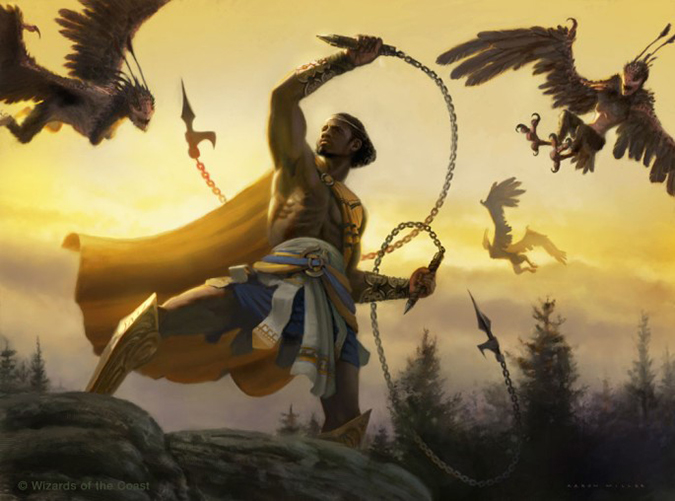 Today’s article is going to be the first in a series of semi-related subjects. The theme of the next few weeks is something that gets kind of lost in talks about Magic finance: how to weigh decisions and opportunities as a Magic player, and not just as a finance person. Today, the subject is going to be making the best financial decisions regarding tournaments.

The best example of what I mean is taken from a recent tournament experience that I had with a friend of mine. The two of us were going to attend a TCGplayer Platinum event (a Standard 1K, but it also gave out playmats and points down to top 16) that was being held in Orlando. That’s a little bit of a drive, so I got up pretty early to make sure I was packed and able to eat a decent breakfast. My buddy texted me at 8:00 a.m., half an hour before I was supposed to pick him up, to tell me that there was a Modern PPTQ being held much closer to home later that day. I’m not sure how I was able to develop my response so quickly, but it was (verbatim), “I’d rather pay $30 and win cash than pay $25 and win Dragons of Tarkir packs.”

There are a lot of Magic tournaments happening on a lot of different levels in the US right now. While central Florida has always had a strong Magic offering, even in the game’s lean years, it has never been as popular as it is today. This creates the situation of occasionally having to decide which tournament is worth attending. Even if you are not a competitive player and are only looking for trades, the following breakdown should have a lot of information to consider. The type of tournament can often tell you a lot about the other people that will be in attendance, which is a good predictor of whether or not you will find desirable trading partners.

First, what type of tournament is it? This is the most obvious question to ask, but you have to make sure that you unpack the answer fully. Obviously a Legacy and Vintage tournament is going to draw some high-rollers with big collections, but if it is scheduled against a large Standard tournament down the street, it may not even fire off.

More important than the format (because that stuff you can probably figure out on your own) is determining who is involved in running the event. Take the example I discussed up top: my choices were a Standard cash tournament (backed by TCGplayer) or a PPTQ (which is run solely by a local store with the PTQ invite coming from WOTC). In order for a store or event organizer to run a TCGplayer tournament, it has to buy a package from the company and adhere to the rules set forth (the same is true of SCG events). The TCGplayer Platinum event only had 20 players, but because TCGplayer mandates that any tournament run in its name always honor the advertised payout, the tournament organizers couldn’t flake out at the last second (although I’ve seen some try). This means that the TO is required to give out the full $1,000 plus the playmats, points, and other crap that they promised it would, or risk never being allowed to do another one again (although, with only 20 people showing up, that may not be a bad thing). 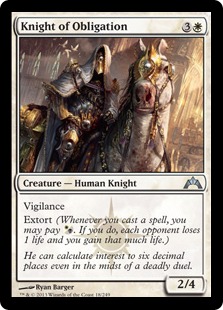 The PPTQ, on the other hand, had over 50 players, crammed into a much smaller location (needless to say, we were extremely lucky we picked the event we did). The PPTQ tournament organizer didn’t have to pay the upfront cost of a “tournament package,” nor was he beholden to any guaranteed prize support beyond the PTQ invite (which is of no cost to the TO). Both tournaments cost $30, but the winner of the 1K got a guaranteed $400, while the winner of the PPTQ got a box of Modern Masters 2015 and the chance to play in an even larger tournament to make the Pro Tour. If we can assume the price of a Modern Masters box is $200 to $225 (which is what most are clearing for on eBay), then the invitation needs to be worth roughly $200 for the tournaments to have equal payouts (the invite, to be fair, does include that Liliana promo; also, I am ignoring the potential of selling the playmat and point cards for the 1K winner). And while I don’t have written confirmation of what the prizes for second to eighth place were for the PPTQ, what I’ve heard anecdotally doesn’t stack favorably against the payout from the 1K. Also, apparently the AC broke at one point (which is not a good thing to happen to a room filled with Magic players in June in Florida).

In all honesty, I knew that the cash tournament would likely be pretty small, but I didn’t expect it to be less than half the size of the PPTQ (which I did expect to be at least somewhat larger). The cash tournament, as part of TCGplayer’s package, was advertised on the front page of TCGplayer, and got mentioned in some of the constant contact emails that TCGplayer sends to Florida subscribers. Beyond that, in order to know anything about the event, you had to follow the organizer (a small game store outside of Orlando) on Facebook. When TCGplayer offers advertising in its packages, many game stores, especially those who don’t have a large presence in the greater community, just assume that they are paying someone else to do the hard part for them. The truth is, most people don’t bother to read the constant contact emails, or they have tuned out the tournament feed on the right side of the TCGplayer website since it works as basically a cork board for the entire US. 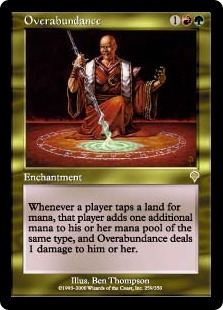 The PPTQ system, on the other hand, is not advertised in the same way, but has the stronger backing of the Wizards website (which isn’t very good, but it has more reach). Since PPTQs are more “official,” and the PPTQ system is very important to players right now, they are more likely to seek them out. Because the current PPTQ system only offers a PTQ invite to the winner, there are a subset of competitive players who will seek out and play in every PPTQ possible, hoping to take one down. Whereas cash tournaments once supplemented a yearly schedule in between PTQs, now PPTQs are often held in competition with each other or one-of cash events.

So far, it seems as though players are valuing PPTQs extremely highly, likely due to their inherent scarcity and the idea that they have variable difficulty. A lot of people end up thinking that if a store that they’ve never heard of is holding a PPTQ, then it will be smaller and therefore easier to win—except that it appears as though they are going to draw a crowd regardless. The only PPTQ I’ve played in was a few months back, in a store with a small local crowd, and they were turning people away the day of.

This is another big factor to consider: is the tournament being held outside of the store’s physical location? PPTQs, especially those being run by stores without a lot of non-FNM tournament experience, are reaching the point where they often include a friendly visit from the fire marshal. The PPTQ the other week had 52 players in a somewhat small store, whereas the 1K was at a hotel (there was also a comic and toy convention the same weekend). The 1K, in addition to the package price that the TO paid TCGplayer, had to pay rent for the space for the day. 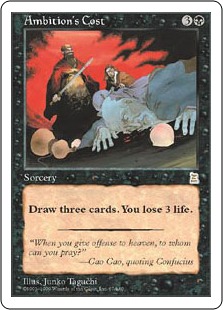 When tournament organizers have to pay rent, they usually let other people help, and this means that there was vendor space available! Yes, the twenty-player, cash tournament had two vendor booths (the store hosting the event plus one other). Vendor booths are a delight unto themselves, and if you know the store doing the vending, you can typically play to its strengths. I knew the alternate vendor at the event (I have a friend who works there, although he wasn’t present at the tournament), so I was able to unload a lot of Standard stuff I didn’t want into a Taiga and an Ali from Cairo1. Most stores are not going to have the space to have a second vendor come in, even if they wanted to (and they don’t), so this cooperation is something you’ll only experience when a TO is shelling out a couple grand in rent for a day.

I’ve only played in one PPTQ so far, and my guess is that the quality trends overall with the quality of the store and its tournament history. I’ve read some horror stories about events being understaffed, although now that local stores aren’t hosting actual PTQs, those stories have seemed less severe.

Ultimately, you need to make the decision that best compliments your goals. If you want to play on the Pro Tour, then you need to play in a lot of PPTQs (and probably a healthy amount of Grands Prix, if we are being realistic)—there is no other way to get there.

But if you are like me, then you typically want to maximize your tournament opportunities. I don’t play in Magic tournaments every weekend, so when I get the opportunity to, I like to play in the one with the single biggest impact. Look at the value of first place compared to the value of eighth place, and then try to figure out what a top eight split would most likely be. This is the primary reason I am down on PPTQs: the most important part of the payout cannot be split eight ways.

The Star City Games IQ tournaments, by contrast, have fixed this problem by introducing a point structure into the mix. I’d like to see WOTC adopt this technology for the PPTQ system, but the company has publicly stated that it doesn’t want Pro Tours to be too big, which is a problem SCG doesn’t need to consider for its Invitationals. The IQ tournaments also have a guaranteed cash payout. Any time a tournament is giving out cash, it is nice to know that there is another name (SCG or TCGplayer) behind the TO making sure things go off without any snags.

My personal hierarchy of (small) tournaments is as follows:

It’s quickly worth mentioning that while the SCG IQ events have a pretty high value, the Open Trials and Game Nights are basically playing slot machines that pay out in playmats or animal-themed trinkets. I never calculate the “value” of a playmat into my expectations of a tournament result, because so many of them are hard to move (this is because the tournament package mats have a higher distribution and less importance than one-off playmats, like GP mats).

TCGplayer points sell well because they can be used for byes in events, they can buy you into the big invitational that just happened, or you can get, like, Frank Lepore’s autograph. The typical value is 1.5 to twice the point value of the card, but sometimes you can negotiate for less. Then again, on the day of a 5K, I’ve seen people pay three times or higher.

Hopefully you enjoyed this first installment on tournament and player finance! And as always, if you know somebody who wants to buy a pile of ugly playmats, point them my way.

1 I blame Sigmund for making me want to buy old stuff.