Welcome back to another Thursday installment of my article series. I really appreciate you reading these, and I’m hoping that you had a wonderful New Year’s celebration. I know that last week I said I would bring back an old persona of mine, but a spoiler came up that I think is a bit more pressing. I was going to just write this article on the running MTGPrice spoiler coverage, but it ended up being a lot longer than a quick blurb about a card’s price that I’m trying to restrict myself to. If you’re not tired of me bombarding you with green link text yet, you can go check out our running spoiler coverage right there in that convenient link.

The card/bulk rare I want to spend an entire article talking about is none other than Remorseless Punishment. The most recent in the line of “your opponent chooses which bad thing they want to happen,” this five-mana sorcery has gotten a resounding “meh” from the Spikey players of the world, and a “I want to copy this with Howl of the Horde and then Increasing Vengeance from the non-competitive players that I see and commonly interact with on Facebook. If you’re one of the former, you can probably agree with me that this will not see competitive Standard  play, and we certainly won’t be seeing it in any Modern lists. Five-mana black spells in Modern are reserved for game-winning effects like Ad Nauseam, and this is not going to have that kind of impact unless your opponent is sitting with no creatures, no hand, and has three life left. 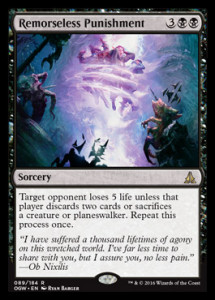 If you’re not planning on sleeving up Grixis Twin for your next PPTQ and you just like to jam Magic cards with your friends over a kitchen table, you probably have a bit of a different opinion on this card. Your wheels are turning on how to make this deal 10 damage, or how to combo it with Liliana’s Caress to limit their options further. My co-reviewer Jason Alt said that this is going to pre-sell for more than it should, although I don’t think SCG is going to pre-sell a rare for less than $.49. Vendor confidence in this card is extremely low, and I can’t say that I blame them. This is not the (potential) Constructed all-star that Kozilek’s Return is. This card has an entirely different market, one that I have quite a bit of experience interacting with.

You knew Browbeat was worth $1.50, right? I think that’s one of the more well-known “picks” that is impossible to keep down in price. It was in a Planechase a while ago, and then reprinted in a Duel Deck, but is still rock solid and easy to sell at $1 locally (or $.50 on a buylist if you’re lucky).

On Jason’s paragraph about Remorseless Punishment, he talked briefly (and linked a very helpful article from 2006) about something called the “Browbeat effect.” The shortened version (I’m assuming you’d rather stay here and talk with me instead of leaving this page), is that while both effects of Browbeat are very powerful and cost-effective on their own (a 2R Lava Axe is incredibly powerful and undercosted, as is a 2R Concentrate), the power in these diminishes significantly when your opponent gets to pick their poison. The common sentence that I hear a lot to describe this is: “The card will never do what you want it to do, it will do what your opponent wants it to do.”

If that statement is true, then why is the card constantly bought  from my display case at $1 a copy, and why is it immune to reprints from a value perspective? Well, probably because the vocal and competitive minority are looking at the card from the wrong perspective. In order to “properly” evaluate the card (and the “Browbeat effect” as a whole), let’s step into the shoes of somebody who has never been to a Magic tournament and just wants to slam cardboard with their friends with 78-card unsleeved decks.

Hi, my name is Johnny. I’m a fictional character that DJ made up for the purposes of this article. I really like to play red and black, and enjoy effects that burn my opponent. Unfortunately, red doesn’t have cards that draw more cards consistently; that sort of thing is left for blue, green, and black. Thankfully, Browbeat is really good in my burn deck. My friend Sam really hates taking direct damage, so he pretty much always lets me draw three cards off of it, even if he’s at full life points. I really love the look on some of my other friends faces when they’re thinking about what to do, because either way I get a really powerful effect for three mana!

Thanks for the interview, Johnny. I’ve had multiple conversations that were similar to this, and stitched them all together to sort of represent the type of player who is comfortable paying $1 for a Browbeat to jam it in his burn deck. The kitchen-table grinders who really want to upgrade on the arms race are the ones who give Vexing Devil a reason to be $10. As someone who regularly plays against (or as) the burn deck at Grands Prix, you laugh at Vexing Devil because it’s a burn spell that gets countered by Path to Exile or a 4/3 that gets countered by paying four life. Johnny sees a way to “guarantee” four damage for one mana on the first turn of the game, especially since the “control decks” full of wraths, counterspells, and planeswalkers that we know and love are much less common in the non-competitive world that’s mostly made of tribal, mill, ramp, and combo. 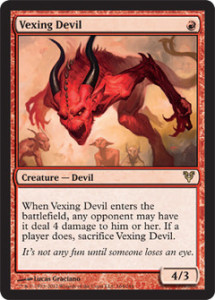 So the argument against this card is that it doesn’t do what it wants you to do, right? What if your primary goal of building the deck wasn’t winning? If the endgame of building your kitchen table burn deck is simply having fun and enjoying a game with your friends, the bar of “what do I need my cards to do” changes. Now you want your cards to help you have fun, and Browbeat fills that void for the invisible crowd that most of the competitive crowd doesn’t interact with anymore. Just like Dash Hopes and Vexing Devil, it’s a lot of fun to start throwing Lava Axes for just a fraction of the price; even if the card sometimes only ends up being a Concentrate or Counterspell.

Now, the other assumption used in the debate is that your opponent will always choose what mode is best for herself when it comes to these punisher cards. But again, we’re looking at this through a different lens than most of the rest of the world here. If you’re sitting at table 547 in round one of a Grand Prix and you slam Browbeat on turn five, your opponent is more than likely going to have the game experience and knowledge to analyze the situation and then select the option that hurts themselves the least. However, that’s not where any of these punishers are going to see play.

When we’re slamming cardboard on kitchen tables, the players involved in the game are statistically going to have less experience playing at a highly competitive level. I don’t think it’s wrong to assume that even though there’s almost always a “correct choice” when presented with a Browbeat scenario, the opponent of someone actually playing the Browbeat is not going to always choose that correct option. When this happens, Browbeat actually does do both of the things that the caster wanted it to do: it gives him the Concentrate when he was hellbent, and it helps him have fun by casting a red card draw spell.

So how does all of this factor into Remorseless Punishment? It obviously doesn’t go into the same deck as Browbeat, unless you want to build some sort of weird R/B “bad choices” deck. It has the potential to do twice as much damage as Browbeat or Dash Hopes, but you have to put in some serious effort to get those kind of results out of the card. Like Jason said, it’s probably going to be a more expensive Blightning most of the time. However, I don’t think that’s going to stop the player casting it from having a lot of fun forcing his opponent to make two painful choices, and the kitchen table player still has room for his opponent to make a mistake.

The point of this article is not to tell you to go out and buy Remorseless Punishment at 49 cents each from SCG. This is not a Wasteland Strangler. This card is a Crucible of Fire. You wait until you can buy these at 10 or 25 cents, and then wring your fingers together like a villain until your #mtgfinance cabal of 300,000 non-competitive players slowly scoops up supply over the course of two years until it’s a $2 card. Even if you never get the chance to buy in at 25 cents or lower, I would still respect the potential demand for this card and treat it differently than other true bulk rares.