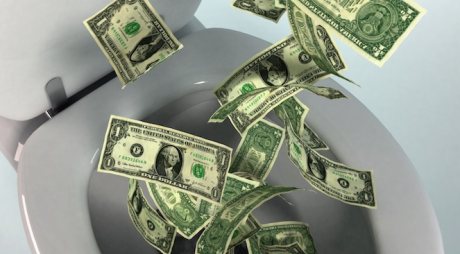 Alright! So maybe I was a little mean in last week’s article, and I apologize for that. I’m a little bit frustrated from trying to explain some concepts to people repeatedly, and I wanted to vent it through satire. My message seemed to get a little lost in translation, so let me reiterate the primary point that I wanted to nail down in the midst of all the Modern “buyouts”.

I do not deny the existence of speculators, as some seem to believe. I know there are people out there who buy Magic cards (sometimes lots of them) in hopes that they go up in price. I’m guilty as charged when it comes to buying copies of  Spawnsire of Ulamog and Heartless Summoning, then waiting months for them to jump. If that should be considered evil, so be it:

“Hi, everyone. My name is Douglas Johnson, and I am a dirty speculator.”

I’m also in agreement with the statement that we finance writers can be a catalyst for a card’s price increasing. Again, Spawnsire is a pretty good example of that. While I remain adamant that Spawnsire would have ended up a $9 card regardless of my articles, I’ll accept that my writing probably caused it to jump a few weeks sooner than it otherwise would have. I neglected to mention our effect on the market, which Derek Madlem summarizes very well here when referring to “the observer effect.” I missed an opportunity to elaborate on that in the content I wrote last week, and accept that mistake.

However, the disagreement starts here. I’m really getting tired of the old, “Rabble, rabble, speculators are making Modern prices extremely high, rabble, rabble.” The shadowy cabal that turned my stack of 100 Heartless Summoning into 100 Benjamins does not have the power to profit by making powerful Modern cards jump by ridiculous percentages and stay at those prices without actual demand.

I will stand by that statement. Nowif only we had an example of a card to showcase it… 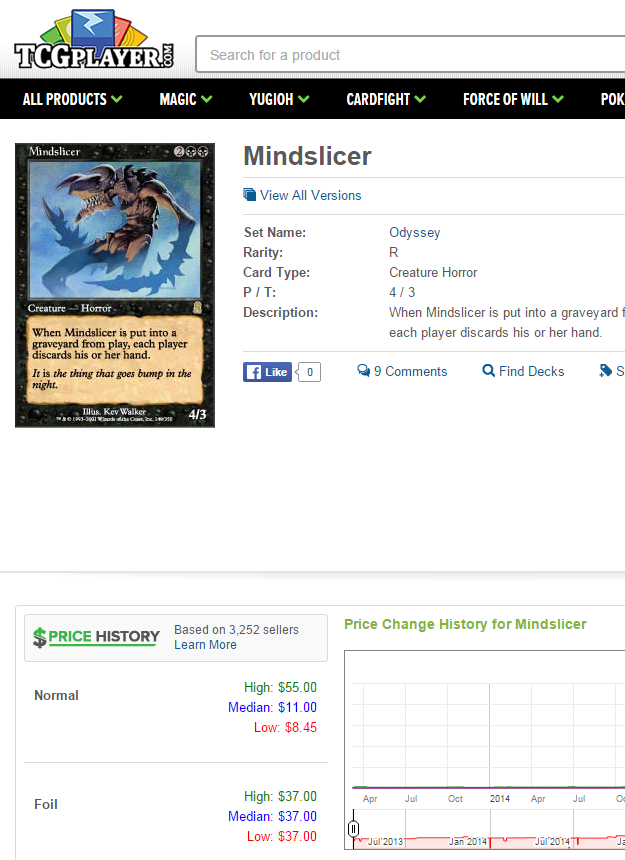 What. Alright. This card will work, I guess.

Even MTG Stocks itself is disgusted at the Mindslicer spike, so it refuses to show us the card image on the page. Oh, you didn’t notice? That’s probably because my replacement drawing is better in every way. Well, let’s get to work and do some research, to make sure we didn’t miss anything. I’ve never seen a Mindslicer cast in Modern or Legacy in my entire life, although it is pretty fun to cast in a B/G/X Commander deck. However, there’s absolutely no way that the “new” Meren deck is enough to cause this kind of movement.

I wonder if the pros are testing some sort of super secret tech involving Mindslicer, Lyzolda, Savra, and the five pieces of Exodia? That’s the only other rational explanation that would drive someone to actually believe that there’s reason enough to expect a higher price point. Maybe a pro like LSV is planning on shaking up the format now that Twin is out of the picture. 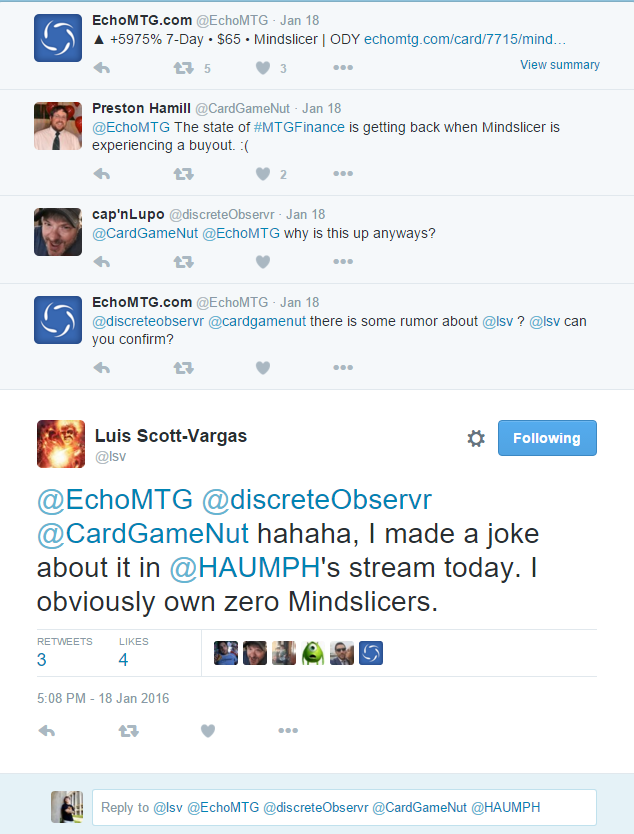 Actual… Demand…? By Who?

So there’s no spicy new Commander demand, at least according to EDHREC (the most reliable compilation of EDH/Commander decks that I’m aware of), and LSV made a joke about that card. One or more  psychopaths drank the kool-aid and felt that LSV was being serious. If only we could look into this guy’s mind and see what he was thinking while he was rolling his face around on the keyboard in a combination of clicks that allowed him to fill his cart with Mindslicers and hit “Confirm Purchase”. Thankfully, we have a cameo from your favorite old-man Commander-durdle writer to provide a comedic spin on some historical precedent. I wasn’t a part of the public finance cartel at this time, so I don’t remember the Cosmic Larva buyout as clearly as Jason Alt. 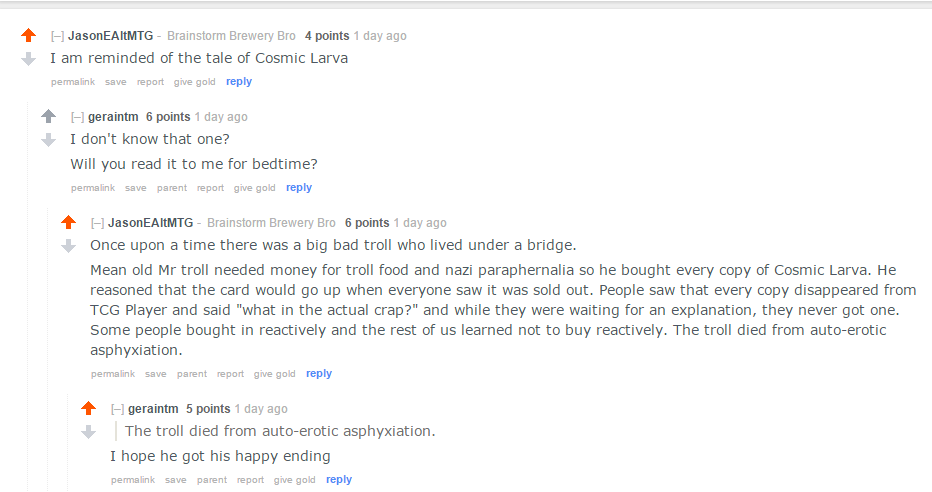 Thanks, Jason. Now, let’s recap our lesson from last week. As long as nobody buys Mindslicers at the $10 they are now, they have zero reason to remain at $10. The sellers who pick their Slicers out of bulk rare boxes, Commander decks, and out of the toilet will list them on TCGplayer and eBay, causing a drop back down into the dollar bin relatively quickly. Then everyone will forget about this crazy person who bought them out, and players can go back to paying $1 to jam this in their Meren decks. Until yesterday, I firmly believed that would be the case. I heard about the Mindslicer buyout, and thought, “There’s no way someone is actually going to pay anything over $2 or $3 for this card. This guy is going to crash and burn, and I’m going to revel in it.”

That all changed yesterday during our Cartel Aristocrats podcast, when we brought up the topic of Mindslicer. Travis pointed out something I had forgotten about; that you can check the price of the last sold listing on TCGplayer if you have a seller account.

That reminds me: you should probably get a seller account on TCGplayer, even if you don’t currently sell cards. All it takes is a bank account, phone number, and email address, and you can be set up relatively quickly. Even if you have no plans to sell cards at the moment, you’ll have your account ready to sell in the future if you want to quickly liquidate cards that spiked, like Mindslicer, and even if not, you’ll have access to this information regardless.

So this is what the listing looks like when you’re putting something up for sale on TCGplayer. You have the lowest listing column on the left, which you usually need to match if you’re trying to move your cards as soon as possible. The price on the right is the “market price,” which attempts to average the  most recent sales for that product. The middle column, while rarely used for listing cards, is helpful in situations like this. It actually tells us what someone else paid for the card, although it doesn’t say when. It’s kind of like checking the eBay completed listings…

My Mind is Sliced

Wait, don- … Why wou-… Alright, then. So someone needed a playset of Mindslicers at $9 a piece. That’s… interesting. And according to the “last sold listings” for the Ninth Edition and Odessey versions on TCGplayer, people have purchased non-foil copies of varying conditions $7, $8, $9, and $10. On the cast, Travis even said that he saw the last sold listing hit $30 for a single copy.

I don’t understand. This was supposed to be a “lol, someone tried to buyout Mindslicer and is going to fail miserably” moment, but human beings are actually buying this card with no evident reason. There’s no unstable decklist that was leaked onto the internet that was supposed to be hidden tech for the Pro Tour, no Travis Woo character streaming and encouraging people to buy. There’s nothing. I see tons of users on Facebook, Twitter, and Reddit suggesting that this is going to crash and burn with no buyers, but there’s still at least one person drinking the Kool-Aid and buying copies.

The guy who bought this card out should absolutely be criticized. I’m not trying to defend him, or suggest that buyouts like this are a positive thing in the community. However, the blame is not entirely on our spooky speculator if Mindslicer sticks at a price that is above a couple dollars. For whatever unholy reason, there were multiple people who bought into Mindslicer at the $7 to $10 range. That’s demand, regardless of why they bought it or their mental capability to grasp long-term consequences.

If Slicy finds a nest in the $4 or $5 range two weeks from now, that means one of two things has happened.

If someone tries to buy out a card for no reason, but players accept the new price and pay it, rogue speculators are not the problem. We are.21